March 4, 2020
On March 4 the Ukrainian Parliament sacked the government of Oleksiy Honcharuk, and voted in favor of appointing a new prime minister, Denys Shmyhal. Many ministers were also changed. We’ll try to explain the reasons for this reshuffle. 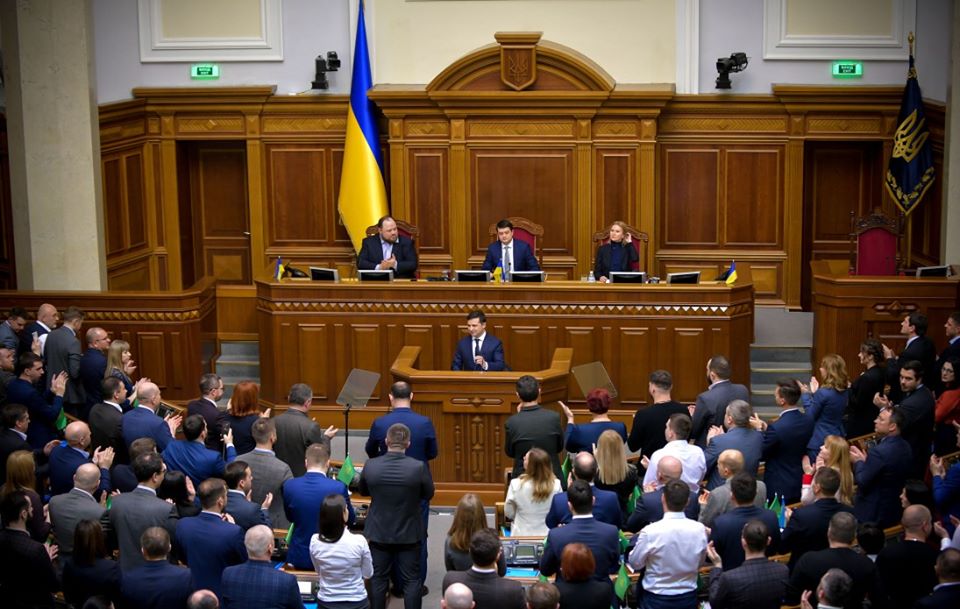 Photo credit: The Office of the President of Ukraine

Rumors about a reshuffle of Honcharuk's government began circulating long before this actually happened. There was a "false start" in January, just before the Davos Economic Forum.

At that time, Honcharuk's government survived. But now the prime minister was forced to write a letter of resignation. UkraineWorld tries to understand the reasons.

It should be said openly: there is a huge information attack on Ukraine's pro-Western course. It is organized by several key players:

1) Victor Medvedchuk, Putin's best friend in Ukraine, who has established a powerful information empire: TV news channels 112, NewsOne, ZIK and others. They are formed using a clear model for Russian state TV channels, with a huge level of hate speech, disinformation, and defamation of Ukraine's pro-Western course.

2) people close to Ihor Kolomoyskyi, a notorious oligarch who supported Zelensky's election campaign, form an anti-Western "Trojan horse" inside Zelensky's "Servant of the People" party. Their Telegram channels are also quite aggressive with regard to the country's pro-Western course.

All these players disseminate a big story that the so-called "sorosiata" (literally "Soros piglets") trying to conquer Ukraine and "sell" it to Western billionaires like George Soros. This meme encompasses all pro-EU and pro-Western forces.

Such an attack against Soros as a model of the West has never been so toxic in the history of Ukraine, even during the times of Leonid Kuchma or Yanukovych. Last Friday, for example, one of Medvedchuk's channels, ZIK, hosted an all-day-long "marathon" called "It stinks Soros" (see more on anti-Soros narrative here).

There are more serious arguments behind the sacking of Honcharuk's government, and they target real problems this government had to face.

According to these arguments, "new faces" with Western experience, education or NGO work were not good enough for a good government in a country like Ukraine, and Zelensky needs good managers and people with grassroots knowledge.

During his speech in Parliament today, before the voting for Honcharuk's resignation, Zelensky pointed at problems in the Ukrainian economy.

He mentioned monthly industrial output falling by 5%; worsening of living conditions of the retired people; the bad situation with utilities prices (still too high despite progress and reforms in the gas sector). He also pointed at big salaries of ministers or members of supervisory boards of state-owned enterprises and regretted the fact that the work of law-enforcement bodies has not brought big results.

By reshuffling the government, Zelensky is trying to address issues that worry people, and that lead to the fall in his ratings.

Another problem that Zelensky faces is his decreased power in the regions. As Ukraine is going along the "decentralization" path, it is highly important to keep the vertical structure of executive power (through actual "state administrations", and future "prefekts") which can be a balance to bodies of self-governance. If this balance is not maintained, the country risks falling apart.

Local "feudals" are getting stronger, as Zelensky's presence in the regions is modest, which can lead to a huge challenge when the country becomes difficult to govern. What Zelensky needs now is experienced state managers who can do their job.

3. Reshuffling of the oligarchic map

The sacking of Honcharuk's government might mean increased influence of Akhmetov as a counter-balance to Kolomoyskyi. The new prime minister, Denys Shmyhal, worked for DTEK (Akhmetov's energy holding) but there is a question as to whether that's enough to coin him "Akhmetov's person".

Akhmetov is a remarkable surviving element of the Ukrainian oligarchic structure: he was close to ousted president Yanukovych; he had good relations with post-Maidan president Poroshenko, and now, possibly, he is getting closer to Zelensky as a counter-balance to Kolomoyskyi.