August 20, 2020
Natalya Gumenyuk, a prominent Ukrainian journalist, is covering the protests in Belarus and shares her impressions and analysis with UkraineWorld from Minsk 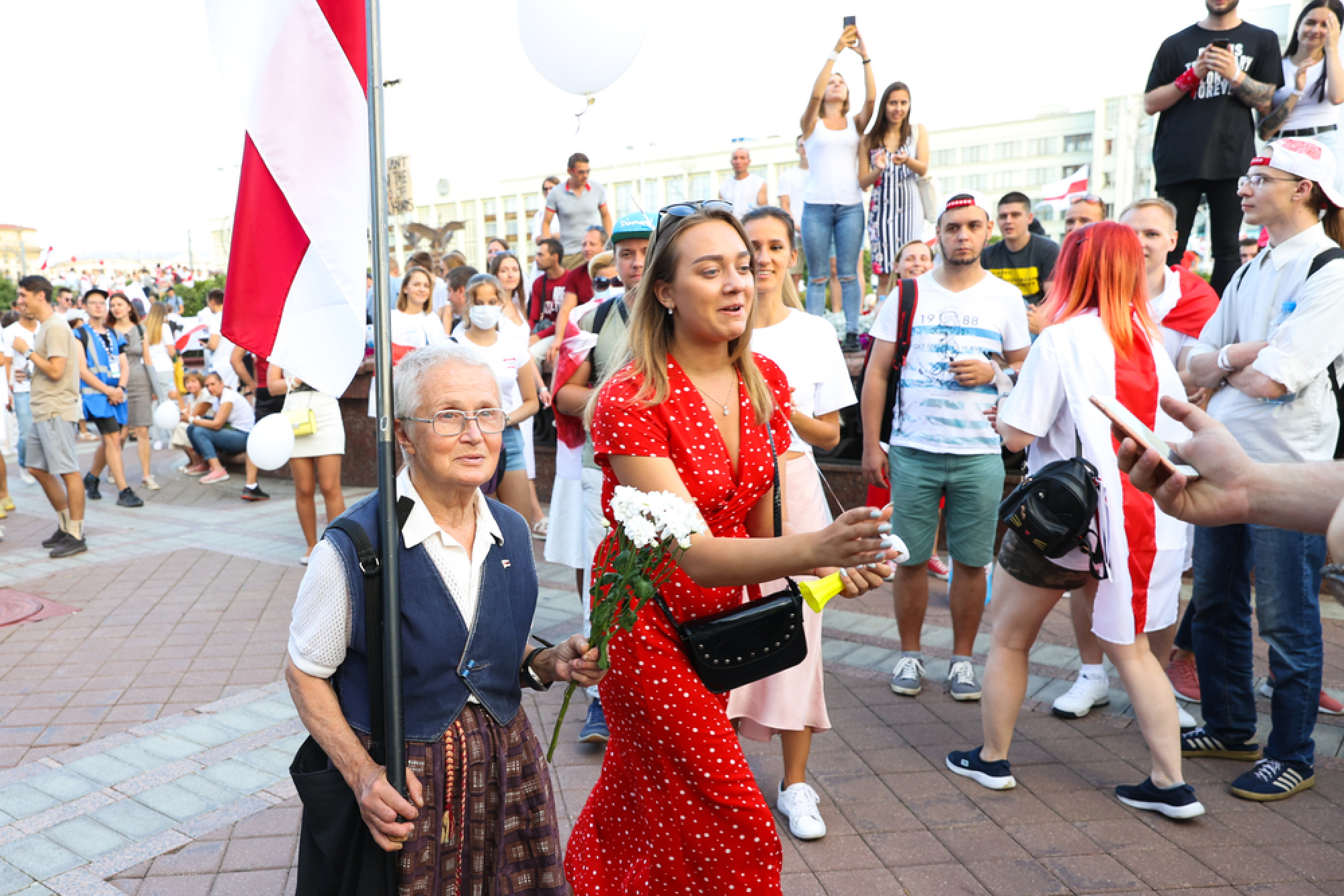 The protests in Belarus are some of the most beautiful and genuine I've ever seen. The paradox of Belarus protests is that everything we believe to be weak points of Belarus society may actually favor the protestors. People are intuitively following all the rules of non-violent resistance. They try to avoid confrontation so that more people join and so that people within the authorities defect. Yes, the risks are very high, as the regime can be brutal. What's incredible is that the protests are also going against the authoritarian trend we see globally and are avoiding the traps which could weaken the movement.

Let me mention some important traits of the Belarusian protests:

Protestors have embraced the white-red flag and have taken ownership over it. While the government has condemned it as a nationalistic symbol, its popular perception is as a sign of freedom.

It's almost impossible to find a division line: neither language, nor social status, nor geography are dividing the protestors.

Yes, this homogeneity of Belarus society had always been used to maintain the authorities' monopoly on power (compared to the pluralism found in Ukraine, which had always been a saving grace of Ukrainian democracy), but now it has manifested in a unity which plays against the Lukashenka regime;

Previous protests had usually emanated from the so-called liberal bubble (civil society, media, intellectuals), and it was always a struggle to engage more people outside of this constituency. The current protests have gone beyond the liberal bubble. The unfortunate fact that civil society had been repressed by the regime means that popular dissatisfaction, now that it has arrived and materialized, could only be pushed forth by a broad majority;

We used to imagine that formal opposition (parties) could be helpful in standing against the Lukashenka regime. Again, unfortunately, competitive political life had been killed off in Belarus.

Now, the lack of agenda-driven political parties has meant that people are not afraid that any political force will hijack the protests.

Sooner or later, formal leaders will appear in Belarus, but then they will be judged by what they do for the protests. Thus, their legitimacy will have been earned.  Even the fact that Tsikhanouskaya is not an experienced political actor plays in favor of her leadership, as it's clear she is not power-hungry. (As one of my Belarusian colleagues says, she is like Frodo carrying the ring. It is a heavy burden for her, but she has a strong will and is a good, wise person). So she does not alienate protestors.

What had earlier been a potent and critical base for Lukashenka might now be one of his most critical weaknesses. Since most industries in Belarus are state-owned, the state is dependent upon the workers who are striking and protesting. This is the biggest threat for the regime. In a system of privatised industry, workers have less leverage over the actions of the state. In Belarus, strikes create risks for the state budget. Moreover, Lukashenka can no longer boast that he enjoys working class support. This is the reason why I can't imagine anything similar happening in Russia, where most companies are private, and therefore strikes are less effective against the state.

Since most industries in Belarus are state-owned, the state is dependent upon the workers who are striking and protesting. This is the biggest threat for the regime.

I talked to Belarusian workers of different ages, from people in their 30s to those in their 60s. They are professionals who read Telegram channels and who know their rights. The elderly think they have nothing to lose -- they've given 20-30 years of their lives to their enterprises. The younger workers who have been working for five to ten years also reject the prospect of living under the same poor conditions for decades to come.

5. Western and external support has not been a major factor

External support might have been important, but Lukashenka has managed to create a state which is used to isolation and is less dependent on the West. This may mean the West doesn't have much leverage. Still, since the protests are nation-wide, and the biggest threat to the regime comes from small towns, from civil servants who might defect and who do not have any connection to the West, the protests do not depend on outside actors. Thus, the relative lack of extensive Western media coverage about the events here, and the lack of bold action from the US and the EU, haven't had a major effect on the protests and haven't demoralised protestors.

Around 7000 people have been detained, and we know about up to 400 have been injured. These stories have not yet been told, since there is no capacity to tell them right now. But the fact that these indignities continue is prolonging the protests, as people continue to learn about more and more cases of the authorities' abuse. Belarusians' obedience and trust towards the state make them even more shocked by the state's brutality. Those who earlier didn't hold ill will towards Lukashenka and those who were loyal to him have been the most shocked and angry, compared to the human right defenders who already knew what the regime was capable of and weren't surprised by its cruelty.

Protestors understand they can't gather when it's dark. Therefore, nobody should expect the emergence of a protest encampment like during Ukraine's Maidan. It's impossible to destroy and use something which is not there. Because the physical strength is still on the side of the government and police, any confrontation has the potential to ruin the cause. Still, I hope this self-discipline will be maintained. Twenty six years of authoritarianism have taught people to be extremely careful and be cautious of provocateurs. These provocateurs are visible in the crowd; they are often those calling for people to go to protest in front of the prisons at night (which is incredibly suspicious). I personally strongly believe in the success of nonviolent resistance, and I think on Ukraine's Maidan it was mass mobilization which played the decisive role in securing victory, rather than violence.

By collecting garbage and taking care of the public spaces where they're protesting, people have shown that the protests are not about chaos, but about order, civic-mindedness and discipline.

For me, one of the most poignant symbols of this protest movement has been the plastic garbage bags which people bring to the protests to collect empty plastic bottles and other rubbish. It has been very hot in Minsk, so people are drinking a lot of water. By collecting garbage and taking care of the public spaces where they're protesting, people have shown that the protests are not about chaos, but about order, civic-mindedness and discipline. This discipline, which had earlier been a source of regime strength, is now a sign of hope for Free Belarus.