February 28, 2020
Ukraine’s economy will be do much better by improving the its infrastructure, development of the regions. We look into what the EIB did, what it plans for Ukraine. 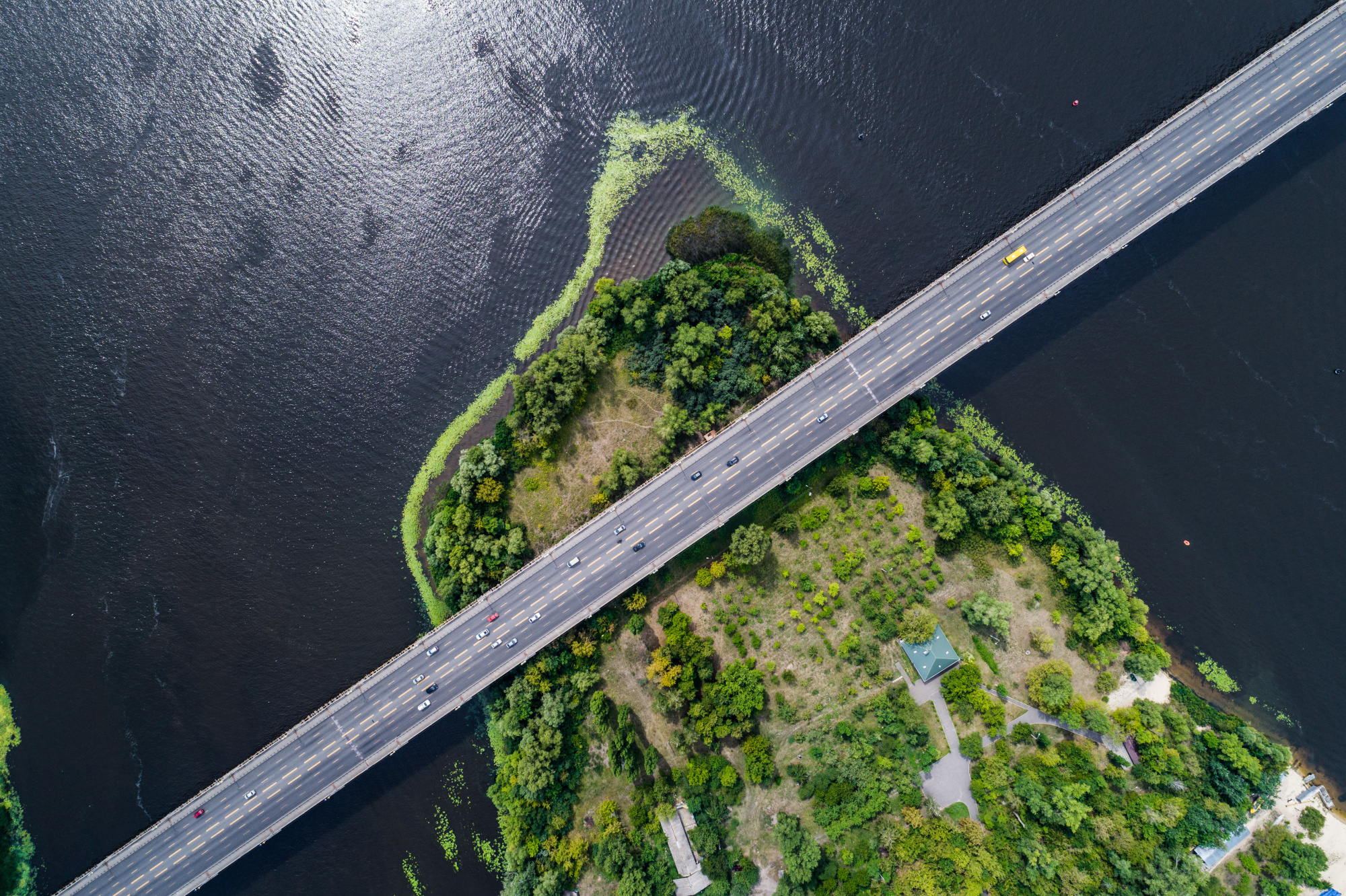 The European Investment Bank is among the most important EU instruments involved in transforming Ukraine. It often focuses on critically important issues such as the quality of roads, renovation of airports, vocational training, and supporting the recovery of regions affected by the war in Eastern Ukraine. The results of its work are tangible since they are something citizens can see and feel themselves in their everyday lives.

UkraineWorld went to a briefing from Jean-Erik de Zagon, the Head of the EIB Resident Representation for Ukraine, to know more about EIB's achievements and plans. Below are key points from Mr. de Zagon's remarks.

On global trends and loans to Ukraine

Out of 72 billion EUR for projects globally, EIB lent 1.8 billion EUR to countries outside the EU in 2019. Due to Brexit, Eastern Partnership (EaP) countries have fully replaced the UK as recipients of EIB investment.

The bank has a portfolio of more than 10 billion EUR lent to EaP countries, of which more than 50% has gone to Ukraine. Last year, the EIB provided about 540 million EUR in loans for projects in Ukraine. This was a significant increase from 2018, when Ukraine received loans of 400 million EUR.

The most significant project of 2019 involved 450 million EUR being allocated towards building European-standard roads in Ukraine, including the Kyiv-Odesa M 05 highway, which will help link Odesa with the rest of Europe and the EU. The other project involved 90 million EUR in loans to finance projects of the Kernel agricultural group.

On climate change and innovations

In addition to Brexit, another major event for the EIB last year was the election of the European Commission's new President, Ursula von der Leyen, who is very much focused on climate change. As the EU's development arm, the EIB strongly supports the Commission's goals to fight climate change. By 2025, the bank wants 50% of its projects to be aimed at the environment and climate change (compared to 31% now). While there are concerns that climate and environmental projects will start to crowd out other good works, fighting climate change offers the EU an opportunity to invest in innovation and new technologies.

By the end of 2021, the bank wants to phase out all investments in conventional fossil fuels, which will have significant consequences for Ukraine. The President of Ukraine, Volodymyr Zelensky, and especially the Prime Minister Oleksiy Honcharuk, have been very clear that they want innovation to be focused on building an environmentally sustainable economy. Thus, many things the bank will be looking to finance in Ukraine, in accordance with the government's vision, will be in that area.

The EIB has 10 projects to finance in 2020, but it is uncertain whether all of them will be implemented this year.

The bank is negotiating with 20 cities, including in the Azov Sea region. There is congestion in many cities, including Kyiv. In the Azov Sea region, there are cities with no public transport other than marshrutkas [privately-owned minibuses which operate on fixed routes and are ubiquitous throughout the former Soviet Union -ed]. It is important to have green public transport, both for environmental as well as public health and safety reasons. Having more electric buses will help reduce and improve the quality of life in Ukraine's cities in cities.

Boryspil Airport Development. The EIB is in discussions with Boryspil Airport to renovate the runway and the main terminal. Again, the bank is trying to push projects for the environment, and Boryspil Airport is not an easy one to sell in this regard. We are discussing having new electric buses, for example. It's a small measure, but it's moving in the right direction.

Ukrposhta Investment Programme. The project being negotiated with Ukrposhta [the Ukrainian Postal Service -ed.] is about logistics and digitalization. It is quite small, but is still important. It supports the vision of the new government.

A Kherson-Mariupol Highway. There is currently a study being done on this project by the Bank's colleagues at the EU delegation. The proposed M14 highway between Mariupol and Kherson will be the key connection between the Azov Sea coast and the rest of Ukraine.

Early Recovery Program Phase II. The previous phase of the Early Recovery Program in the East was very successful in that we really improved the quality of people's lives in the east of Ukraine, where I have been many times myself. Having allocated around 90 million out of 200 million EUR, the EIB financed schools, kindergartens, and hospitals, which really had an impact. The second program might need more investment for villages close to the frontline.

Vocational Education and Training in Ukraine. For this project, we are looking into what we can do in the area of education in cooperation with the EU and our German colleagues. We think it is very important to give a good education to Ukraine's future professionals, so we are looking into developing excellence centres in different oblasts.

There are also three projects in the energy sector, including the completion of the Tashlyk Pumped-Storage Power Plant, the Security of Ukraine's Gas Supply project with UkrGasVydobuvannya, and the Energy Efficiency in Municipal Buildings project, a global project that will work on insulation for public buildings.

It seems that the government is determined to work on energy efficiency in the public sector. There are many buildings to be worked on under the EIB's large project in this sector. We are still discussing what the Ukrainian government's priorities are.

On the timing and quality of projects

There is often a need for technical assistance on these projects. It is not easy for a mayor in a small village to write all these standards of procurement in English. Sometimes they need help, and in the Early Recovery Program, too. We are going to have a very large portfolio of technical assistance that will come from the EU directly.

The strict procedures of the EIB protect the bank itself and the state of Ukraine. In Ukraine, these procedures are also quite complicated, so it takes time to work through them. We really see a commitment from the Minister of Finance, which makes things easier. It takes time to disburse money, but there is serious progress.

There is no problem for big companies to come to Ukraine. They have good lawyers to protect themselves if needed. It's smaller companies that need to start coming to Ukraine. The percentage of FDI [foreign direct investment - ed.], which is probably about 2% of GDP, is too small. Ukraine needs much more FDI if things are to really develop.

First of all, FDI brings money into the country. Second, the international companies which come here develop procurement standards and a certain level of quality for what they require from people, which ends up raising these standards across the economy. They are also important in terms of  environmental and social aspects by raising standards for local stakeholders. The determination of Prime Minister Honcharuk and  President Zelensky to attract foreign investment is something very important.

On the reform process in Ukraine

It is easier to communicate with the new government. To be sure, reforms haven't just started. Some good reforms like decentralization were implemented by the previous government [under Prime Minister Volodymyr Groysman - ed.], as well. The current government is different in terms of speed and will to make the reforms happen. The EIB supports their plans on digitalization, which will bring more transparency. The open dialogue the EIB has with this government is very strong. They really see that the Minister of Finance of Ukraine wants things to go much faster. The EIB sees that they are very committed and we see things changing, and is quite optimistic.

The Ministry of Finance has involved EIB in financing projects of small and medium-sized enterprises (SME) in big social and economic infrastructure modernisations that cannot be financed by ordinary commercial banks.

After Russia’s illegal annexation of Crimea and occupation of part of Ukrainian Donbas, the country faced sanctions from the West, including from the US and from...
PODCAST
January 20, 2022