March 16, 2018
Can UN blue berets bring peace to eastern Ukraine which continues to suffer from an undeclared war ignited by pro-Russian proxies and supported by Moscow since Spring 2014? Or are they just a tool in a political game? Here we discuss major pitfalls related to discussed UN peacekeeping that can be deployed in Ukraine 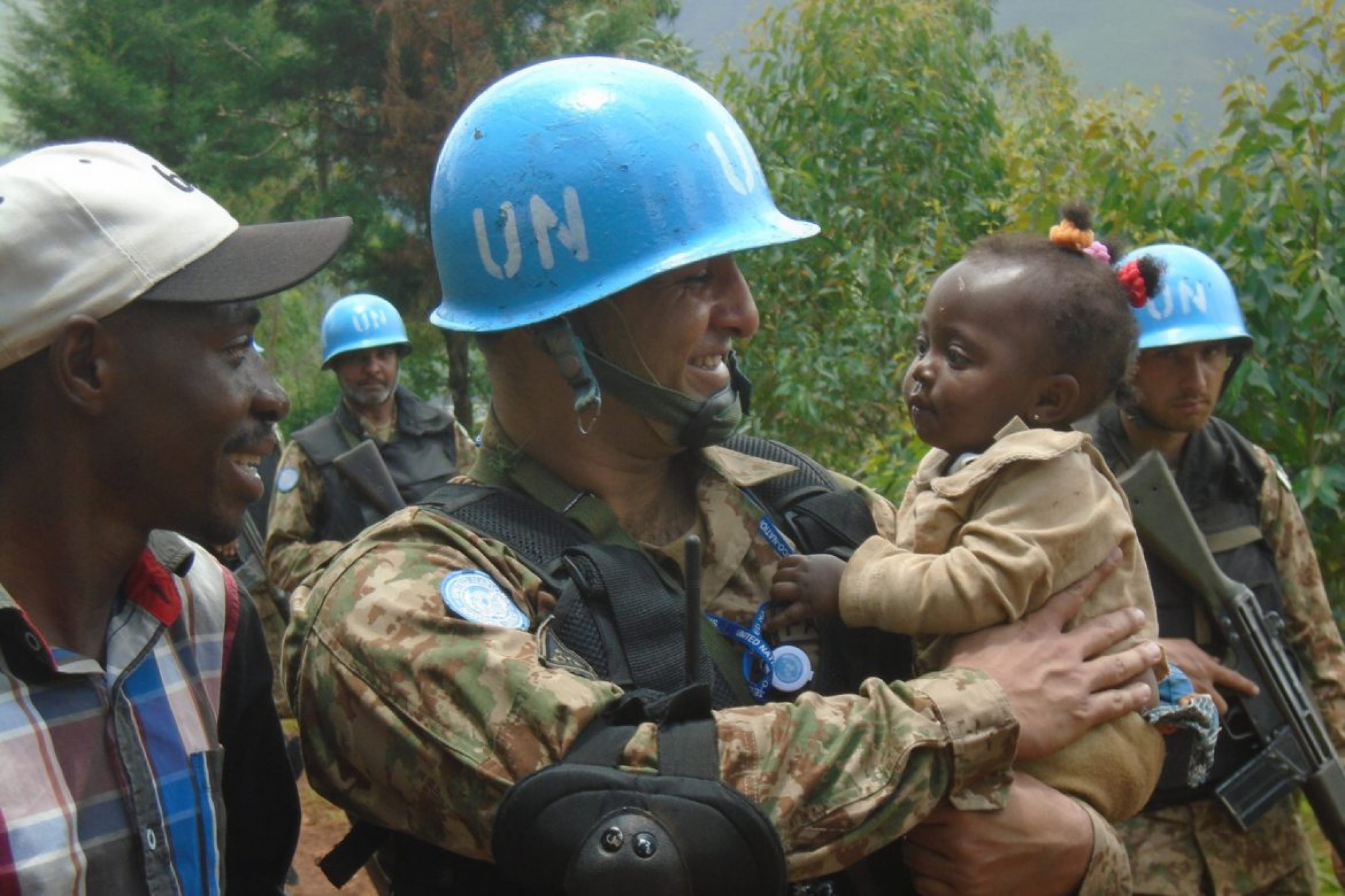 Peacekeepers can either help to resolve a conflict or they can be just a puzzle in a political game whose final aim is to freeze the conflict instead of installing genuine peace, or to get some concessions from the other side. The international community is currently discussing the possibility of sending UN blue helmets to Ukraine to resolve the conflict in Donbas, eastern Ukraine.

The idea of deploying peacekeepers is an attempt to move forward a peace process initiated with the Minsk agreements (2014-2015) whose implementation is currently facing deadlock. However, the question remains whether they will be a tool to implement Minsk, or an alternative to Minsk. Let's look at the issue closer.

Strictly speaking, the Minsk agreements – peace deals of 2014 and 2015 involving Ukrainian negotiators, Russian-backed separatists, Russia and OSCE, under the umbrella of the so-called Normandy format of talks (Ukraine, Russia, Germany and France) – neither approve nor deny the possibility of peacekeeping.

The U.S. and Ukraine largely see UN blue helmets as a tool to implement Minsk. The position of Russia is more ambiguous. UN presence in Donbas could be seen by Moscow in line with the Minsk deals; but Moscow insists that the arrangements should be agreed with the separatists. This would mean their effective recognition.

How not to fall into the Russian trap

As the UN peacekeeping mission can only be deployed when the UN Security Council agrees on its mandate, the key role in talks is played by two UNSC permanent members with the power of veto: US and Russia. Therefore, the mandate is discussed mainly between U.S. Special Representative on Ukraine Kurt Volker and Russian President Vladimir Putin's assistant Vladislav Surkov. A proposed idea of UN peacekeepers – as seen by the U.S. and supported by Ukraine – is to create security in Donbas.

UN peacekeepers seek to create a secure environment in Donbas – a Ukrainian condition enabling local elections. According to Minsk-2 deals, local elections on separatist-controlled territories have to be launched immediately after Ukraine implements the political part of the agreements (special status for separatist territories and changes to the Constitution of Ukraine, inter alia). But Ukraine insists that elections can hardly be held without a long stabilization process, which should include, inter alia, the withdrawal of Russian troops and control of the Russian-Ukraine border by a neutral force.

Elections cannot be held when armed separatists are walking freely on streets and when no Ukrainian party or media can work on the ground, Ukraine says. Kyiv and the U.S. believe that UN peacekeepers would break this cycle as they would guarantee a secure environment for elections.

Russia, in turn, wants to make everything possible to legitimize its proxies on Donbas, including through elections (fully or partially controlled) and more powers (through "special status") so that the Kremlin gets a big Trojan horse in Ukraine's future politics.

Initially, in September 2017, Russia proposed a UN support mission to protect OSCE observers operating in Donbas. This support, however, is not proper peacekeeping. In the event of ceasefire breaches, these bodyguards would not be mandated to respond.

Territorial deployment of the mission is another bone of contention. While Ukraine wants the mission to cover fully non-government territories, including those parts of the Russian-Ukrainian border which are now under separatist and Russian control, Russia has been saying that initially it wants the mission to be deployed on the contact line only. Lately, however, Putin made statements that can lead to the conclusion that he dropped this demand (he says Russia "is not against" this idea) although he made it clear that the agreement on the mandate should be reached not with Russia, but with the separatists, as if they were a fully autonomous force in this conflict.

The national composition of the mission is another contentious issue. Kyiv is against a Russian and Belarusian contingent, while the Kremlin opposes NATO countries, which can make the range of choice limited.

Peacekeepers should be free from the political influence of both parties to the conflict. 'Belarusian peacekeepers, for instance, would not be in a position to resist Russian tanks in case of skirmishes, for example' says Nicu Popescu, Senior Analyst at the European Union Institute for Security Studies.

He also admits the need to find a balance between impartiality and political influence of a country. We know from other conflict zones that the nationality of peacekeepers matters. 'It is more risky to attack, for example, German, French or Chinese peacekeepers than some smaller states. In case of such an attack you could face not only UN statements of concern but sanctions and diplomatic isolation as well. At the same time, more powerful states are perceived as less impartial,' he adds.

It's also useful to consider what peacekeepers will actually do on the ground. 'If peacekeepers are expected to have a lot of engagement with the communities, then linguistic skills might be a factor in choosing troops,' Adam Day, Senior Policy Adviser at UN University's Centre for Policy Research, tells UkraineWorld.

A Russian expert close to Kremlin – quoted by experts of the International Crisis Group think-tank – floated the idea of three-phased deployments of peacekeepers. But in case Russia stalled the process at any point, the UN would be trapped. It would be unwilling to terminate the mission being already on the ground and having invested a lot of time and money, admits Richard Gowan, a fellow at the European Council on Foreign Relations, in a report "Can the United Nations Unite Ukraine?" (The Hudson Institute, February 2018).

International peacekeeping can often lead to a certain degree of acceptance of non-state conflicting parties, were that to be by separatists, guerillas or insurgents. 'Peacekeepers need access permits from separatists, coordinate their movement, talk to separatists via hot lines' Nicu Popescu tells UkraineWorld. In this regard, despite having a decent goal, a peacekeeping mission can lead to the result that Ukraine fears: it can make separatists a de facto autonomous subject with whom UN forces will be destined to talk.

Russia's President Putin tries to stress this even more: he pressures for a more formal recognition of separatists as a legitimate interlocutors. 'This (peacekeeping mission – ed.) needs to be negotiated with these unrecognized republics. Go and agree with them,' he says.

Ukraine, instead, does not recognize their legitimacy. In recently adopted legislation, Ukraine considers these separatists as 'the occupational administration of the Russian Federation', not as an independent legitimate party. These tensions with regard to the status of separatists can undermine further dialogue on a mission's mandate.

Whatever the format of a UN mission is, if peacekeepers guaranteed an effective ceasefire, the Kremlin would demand great concessions from Ukraine and the West. It could be exploited by Moscow not as a tool to settle the conflict, but also to keep its influence on Kyiv and to lift sanctions against Russia imposed by the US, EU and other Western powers.

'When the firing is ceased, Russia and its lobby might demand full or partial lifting of sanctions by the West and implementation of the political part of Minsk by Ukraine,' says Oleksiy Haran, Research Director of Ilko Kucheriv Democratic Initiatives Foundation and Professor of Political Science, Kyiv-Mohyla Academy, in an interview with UkraineWorld.

There is also the question as to what compromises Ukraine is ready for when implementing the political part of the Minsk (special status for parts of Donbas controlled by separatists; changes to the constitution that guarantee this; amnesty to separatists, etc.). Moscow and Kyiv see things differently.

If sanctions are lifted after the deployment of a UN mission, Ukraine would remain with a very few arguments to complete the political part of the agreements, which has very little support among both citizens and the Ukrainian political class. This could turn non-government controlled territories into a frozen conflict zone, a nowhere land suspended between Russia and Ukraine, a land with flourishing trafficking and corruption.

Moreover, 'Ukraine has little space for concessions that it can agree to. Public opinion and the position of the overwhelming majority of Parliament narrow down the room of possible concessions,' says Haran.

In general, Ukrainians support the presence of UN blue berets in Donbas, according to the survey of Ilko Kucheriv Democratic Initiatives Foundation (DIF). In June 2017, 60% of respondents supported the mission's deployment while only 21% opposed it. But the attitude towards the implementation of political part of the Minsk is largely negative, according to the DIF survey.

The majority of Ukrainians oppose to the political part of Minsk, with some regional differences. The majority in all regions opposes elections if they are controlled by Russia and the separatists: 74% in the west, 53% – in the south, 43% – in the east, and 60% – in Ukraine-controlled Donbas, according to the DIF survey

The idea that the police, courts, and prosecution should be autonomous from Kyiv and formed by the separatists' de-facto authorities – as part of the special status of Donbas – is not supported either: 63% are against this in the west, 64% – in the centr, 37% – in the south, 44% – in the east, and 46% – in Ukraine-controlled Donbas.

On the contrary, people living in the eastern (44%), southern (48%) regions are in favour of special status, while Ukraine-controlled Donbas itself is divided on this issue (39% for, and 41% against).

As for the issue of an amnesty for those who are participated in the events since 2014, the situation is the following: all regions, except the west (37% against), think that a partial amnesty to ordinary members of separatist organizations, but not the leaders, would help to move peace forward.

A possible way out of the warfare in Donbas with the help of a UN mission will not be easy, as peacekeepers are not a panacea but only a tool towards reaching peace. It all depends on the parties how the solution will be designed. The problem is that today there is no agreement on any of the points between Russia (and that also means – the separatists) and Ukraine on the composition and deployment of the mission, as well as on the order of actions. The differences in views are polar on the topics of elections, borders and withdrawal of troops. And that makes any peacekeeping mandate a matter of great compromises, some of which may be very hard on Ukraine.

This article has been first published at the KyivPost

Ruslan Minich and Anna Kyslytska
Analysts at Internews Ukraine and at UkraineWorld, an information and networking initiative
Next article

After Russia’s illegal annexation of Crimea and occupation of part of Ukrainian Donbas, the country faced sanctions from the West, including from the US and from...
PODCAST
July 3, 2020