April 3, 2018
On 14 March, 2018, Russian President Vladimir Putin visited his last destination in the pre-election tour—occupied Crimea. The first thing he inspected there was the Crimea bridge, a project set to link continental Russia with the newly-annexed territory. 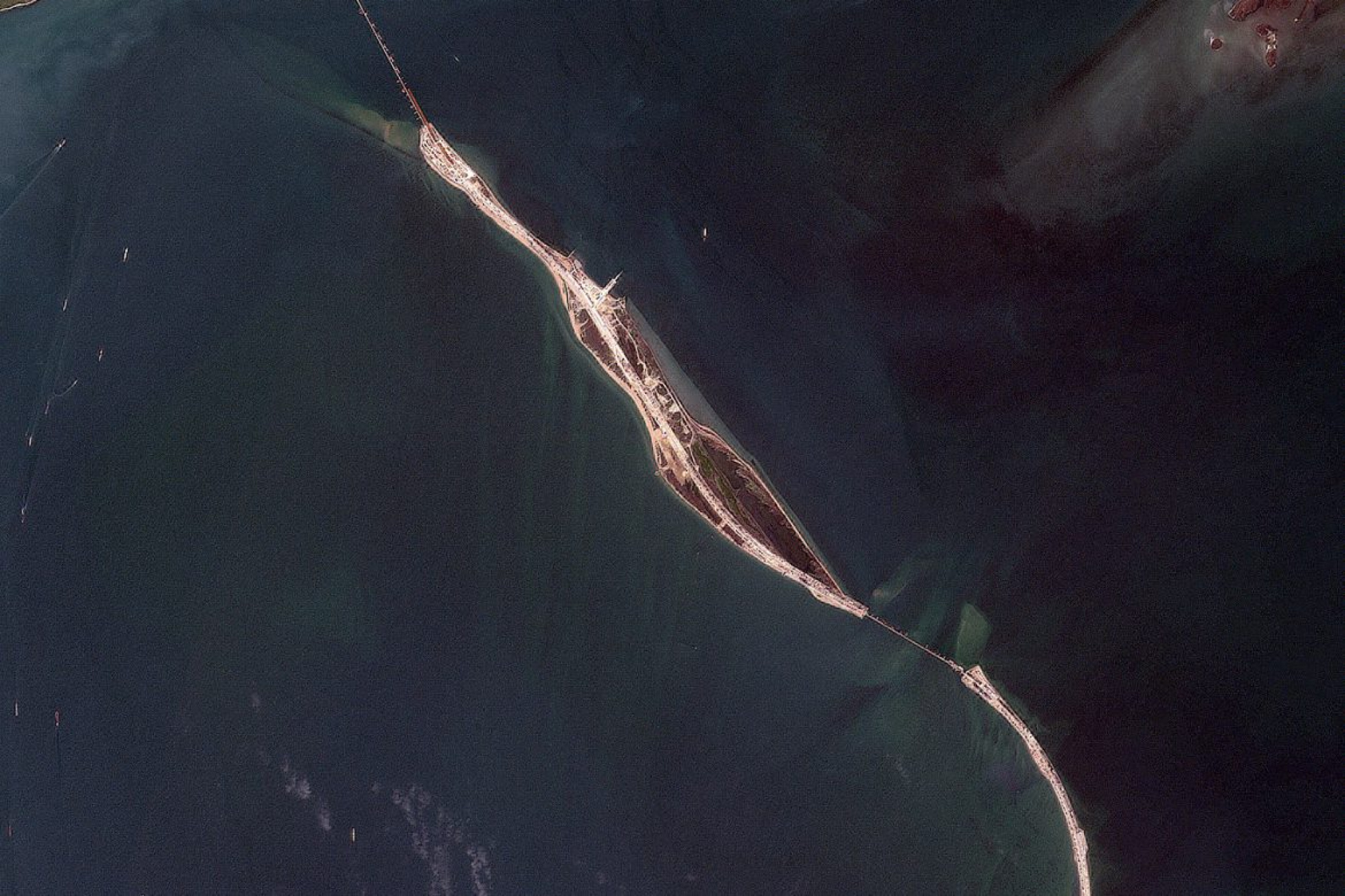 Currently, Russians have to deliver goods and people to the peninsula only via planes, ships or ferries, as there is no connection by land. In order to change this, the Kremlin decided to build a 19-kilometer-long bridge across the Kerch Strait which separates Crimea from Russia's Krasnodar Krai. The project was agreed in January 2015. The contract for the construction worth $3 billion was signed with SGM Group, which belongs to Russian oligarch Arkady Rotenberg, a close friend of Putin.

In May 2015, construction of the bridge commenced; the road bridge is planned to open on 18 December, 2018, while completion of the rail link has been delayed until the end of 2019. Delays have increased the cost of the project significantly. As of 1 March, 2018, the project's costs had exceeded $4 billion.

Meanwhile, even at the construction stage, t he bridge causes irreversible harm to the ecology of the Black Sea and Azov Sea. Additionally, it also damages Ukraine's economy and puts political pressure on Kyiv. Here are the major reasons why the Crimea bridge is dangerous for Ukraine and for the entire Black Sea region.

As the Azov Sea is the place where Ukrainian and Russian economic interests intersect, this Russian project will inevitably damage the economy of the region and Ukraine as a whole.

First and foremost, the project of Crimea bridge set limits on the number of ships which head to Azov Sea ports through the Kerch Strait. Konstantin Batozsky, the director of Azov Development Agency, explains to UkraineWorld that all ships longer than 160m, wider than 31m, whose draft is bigger than 8 meters, or are higher than 33 meters, will not physically be able to pass under the bridge. Panamax ships, a popular type of cargo vessels, do not fit in these limits. "This will limit the amount and range of cargo which could be shipped to and from Mariupol and Berdyansk — Ukrainian Azov Sea ports — significantly," says Batozsky. For instance, metallurgy products and containers will now have to be shipped through Black Sea ports. This fact means that more money will be spent on the transportation of goods by land, while the infrastructure of the ports in Mariupol and Berdyansk will degenerate. Such a scenario could lead to enormous non-receipt of profits, which would add up to those sums caused by the annexation of Crimea.

Additionally, these limits potentially do not allow Ukraine to potentially launch gas and oil field exploration in the shelf of the Azov Sea. Offshore equipment necessary for the exploration is larger than the limits set by the Crimea bridge, Batozsky points out. As a result, this option for Ukraine to strengthen its energy security is closed.

It is an instrument of Russian aggression against Ukraine

The Crimea bridge is first and foremost a political project, which is aimed to achieve several goals with one shot.

First, it is set to secure the annexation of Crimea. "For Putin, the Crimea Bridge is comparable to the Baikal–Amur Mainline [a major railroad built in the Soviet Union to connect Eastern Siberia and the Russian Far East]," says Alim Aliyev, the manager of The Crimea House, in a conversation with UkraineWorld. According to him, Putin intends to use the bridge to show people in Crimea that Russia cares about them. Meanwhile, the bridge would allow Russia to move all kinds of cargo quickly to the peninsula, including military equipment, thus securing the annexation.

Second, Russia, will be able to close the Kerch Strait for all ships. Such a move would effectively turn the Azov Sea into a lake and enable a trade blockade of Ukrainian ports. Russia could use this in number of ways. For instance, the blockade could be leverage to make Kyiv resume energy and water supplies to the peninsula.

It should be noted that Russia's actions violate the previous agreement between Ukraine and Russia on common use of the Kerch Strait. Russia also goes against the United Nations Convention on the Law of the Sea (UNCLOS), which says that states bordering straits shall not hinder transit passage and shall inform accordingly about any known threats to navigation in the strait. This potentially gives Ukraine an opportunity to sue Russia, but this has not happened so far. The Ukrainian Foreign Ministry did not respond to UkraineWorld comment request regarding this.

Construction works have already had an effect on the ecosystem of the Black and Azov Seas, says Alim Aliev, the manager of The Crimea House, in a conversation with UkraineWorld. When the bridge is finished, the danger will be even more real.

Due to mud volcanoes, seismic activity and a sludgy bottom, the Kerch Strait is hardly suitable for a bridge. Heorhiy Rosnovsky, a Ukrainian architect who has previously drafted two projects of a Kerch Strait bridge, tells Focus magazine in an interview that Russia has chosen the least viable option to implement the project. He says that the current project does not take all the above-mentioned problematic factors into account, so the chance of collapse is rather high. The collapse of a massive bridge with wide piers would inevitably slow down water flows between the seas through the Kerch Strait. While construction already results in a change of the living environment for all the organisms in both seas, the bridge's collapse would be a catastrophe. However, the full scale of the bridge's influence on the Azov and Black Seas cannot be forecast at the present time.

Ukrainian Prosecutor-General Yuriy Lutsenko announced on 12 December, 2017 that Ukraine will submit an appeal to the countries of the Black Sea Cooperation for an investigation to be carried out of the potential damage of the bridge to the ecosystem. However, as of March 2018 no conclusions had been published.

There is no doubt that the Crimea Bridge will be completed. Pavlo Kazarin, journalist and observer at Krym.Realii, pointed out in a commentary for _UkraineWorld _that for Putin this project is one of those cases which prove his imperial ambitions. "It does not matter how much money it will cost, as he [Putin] is the one who allocates the funds. The construction could encounter major delays, but it will be completed eventually," he emphasized.

Putin's imperial ambitions and vanity have pushed him to rush the Crimea bridge project. Hopefully, haste and corruption during the construction works will not cause its destruction. However, the damage to the region of the Black and Azov Seas, as well as to the Ukrainian economy, has already been done.

The war in Donbas has been going on for 7 years, but this artist from Bakhmut, a city near the frontline, brings life back to the town through her works. Watch our...
PODCAST
November 28, 2019