December 28, 2021
Amid rising tensions with Russia, many are wondering whether Moscow will embark upon a full-scale attack against Ukraine. UkraineWorld’s recent podcasts look at the potential of such dangers. 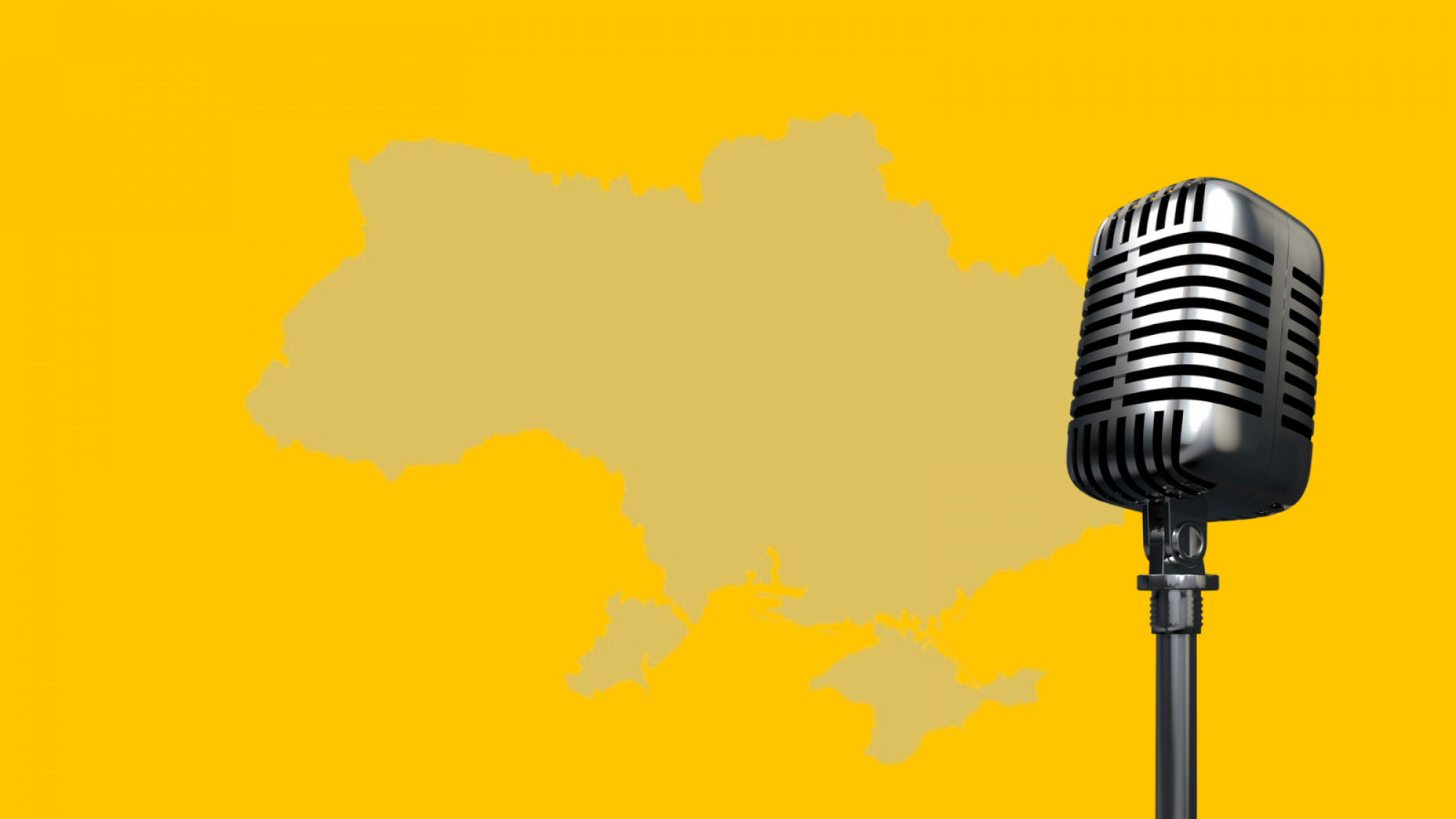 Despite calls for de-escalation, Russia has continued to mass its forces near its border with Ukraine.

According to the Secretary of the National Security and Defense Council of Ukraine Oleksiy Danilov, Russia has deployed 122 000 troops within 200 kilometers of the Ukrainian border. Does Moscow really plan to launch a full-scale invasion? Is the West ready to offer a harsh response? In a series of podcasts "Explaining Ukraine", UkraineWorld’s chief editor Volodymyr Yermolenko analyzes the situation with experts on Russia-Ukraine relations and related fields.

Is the current Russian military build up different from the one in April 2021?

James Sherr, a senior fellow at the Estonian Foreign Policy Institute at the International Centre for Defence & Security in Tallinn, and an associate fellow at Russia and Eurasian Programme at Chatham House in London:

What has changed is the Kremlin’s calculation of how little has changed in the US and Western policy after the last crisis of spring this year. In January 2021, Russian Foreign Minister Sergei Lavrov said they had had enough and wanted concrete changes, in particular for Ukraine to implement the Minsk II agreements as Russia reads them. He let the world know that Russia would make others take them seriously. This reset in January signified Russia’s decision to force the issue in Ukraine and in the West. This is thus a continuation. The Russians find the status quo intolerable, and they think they have leverage that the West cannot match when it comes to coercive capability in this particular space. They are prepared to show that they are serious about using it.

Is Russia’s plan for a full-scale invasion real? What are the possible scenarios?

Russian aggression is possible at any point, since it’s already been part of our life since 2014. We’ve been living with so-called limited aggression.

Putin is well prepared for this complicated game where no one can say what he is going to do the next day.

We do not know what is going to happen next, but we have to acknowledge that Putin has a variety of diplomatic and military instruments. He creates problems, and he can both escalate and de-escalate the situation.

James Sherr: The Kremlin’s preference, with all its manoeuvres and deployments, is to frighten us to death. That does not mean that its forces won’t be used. Kinetic conflict and coercive intimidation are not mutually exclusive. We trap ourselves in the either-or binary thinking: either things are going to stay as they are, or bombs are going to be falling on Kyiv. What we need to focus on is the use of force in the limited ways that would have a dramatic impact. The military objective of such an operation, however it takes place, would not be to occupy territory but to destroy and shut down Ukraine’s military forces, and make it clear that all the investments, trainings, all the Western, American and British support since 2014 will have been wiped away in the matter of a few days. That’s the message they want to send.

Peter Dickinson, chief editor of the UkraineAlert blog at the Atlantic Council:

The reaction from the US and the Western capitals would indicate that the information they have is cause for serious concern. With someone like Putin, you cannot rule out anything, but a full-scale invasion of Ukraine is of very low probability.

It may be that Russian objectives are less ambitious than to occupy Kyiv or the whole of Ukraine.

Once Russia launches a surgical strike against Ukraine’s military capabilities and infrastructure with missile and air force, there’s no more denying that it’s a Russian war. If they were to lose that diplomatic card of deniability, perhaps they would want to officially take the unofficially occupied regions in the east of Ukraine, or to expand and include the whole of Donetsk and Luhansk Oblasts. That would be a lot less costly in terms of lives for Russia than a full invasion. Would it achieve the aims that Russia has? I am not convinced.

James Sherr: If you are dealing with a complex of power and a country that looks at itself in very different terms from a liberal capitalist democracy, the impact of these things is often very different. There is a strong pain threshold there that is understood, at least within the elite, with regard to major national interests (and Ukraine, for Russia, is the most significant one). So one has to be sceptical. Russians understand and we all have to understand that sanctions that deeply damage Russia will also be damaging, to a great extent, to interests in the United States and elsewhere. What needs to be done has to have a military component.

Money matters to a lot of people in the Russian elite, but is it decisive? I am not convinced.

If we look at Putin’s motivations here, he sees Ukraine as a key issue for his whole reign. Ukraine will define Putin in many respects, looking ahead and looking back. If he cannot bring Ukraine back into the Russian sphere of influence, he’s a loser, and he knows that. Historically, he would be a major failure in Russian history, and Russia itself would be under threat by the dangerous example set by democratic Ukraine.

What are Putin’s goals, and will the West coerce Ukraine to compromise?

James Sherr: The so-called compromise solution over Ukraine would be the most damaging. For Russia today, the status-quo is simply a place to stay and rest for a while, it is never an end state. As soon as you start to address one of Russia’s core demands, and you make progress, there will be another one. There are minimal demands regarding Ukraine, and regarding Western Europe (no NATO forces near Russia’s borders, Russia must be treated as equal in a formal treaty, ruling out future NATO enlargement etc.) that cannot be compartmentalized, as Westerners would like to do. The problem in the West is the belief that Putin, just like the rest of us, wants peace in the world. Putin doesn’t mind being the adversary of the United States as long as Russian national interests are being respected. They are interested in achieving specific changes in the way the world is run.

Putin’s Plan A is to prove the West is weak, and that they will accept a new ”Yalta”.

His main motivation is to show that the democratic world is not capable and not willing to defend Ukraine. He understands that there will be probably no ultimate response from the West to his far-reaching demands to stop NATO enlargement, or any kind of military supplies and security assistance to Ukraine. But he may stimulate further divides in the West. Putin also understands that public opinion in Western Europe is not supportive of strong confrontation with Russia, and political elites will be less sensitive to this conflict and will try to build more distance. This is another Putin expectation: to tell them that they will sooner or later accept another Yalta: some sort of divide of spheres of interests. It may have a different shape, but it will make them believe that in this part of the world, Moscow has a primary voice, and its neighbors have limited sovereignty. Putin has already managed to stimulate these discussions, which demonstrates a lack of integrity and sustainability on the side of the biggest Western powers. His expectation might be that at a certain point, they could agree to trade and bargain, and promise Putin not to take steps with NATO enlargement in order to give some ground for de-escalation.

Peter Dickinson: Is Russia’s end goal to have an autonomous Donbas? I don’t think so. Some Western countries, like France and Germany, would go as far as they could (to pressure Ukraine) if it meant bringing peace with Russia. But President Biden and the people in charge of American foreign policy are not amongst them. The US may create the impression of compromise, but they are not compromising the fundamentals of Ukrainian security. Ukraine would not accept the autonomy of the Donbas with Russian administration. And it is unlikely that the West will abandon Ukraine or cease its support. America is getting involved in the peace talks, which is potentially very promising.

What can Ukraine do about it?

Oleksandr Sushko: With Crimea and Donbas occupied, neutrality is simply a non-starter for Ukraine. The current level of unacceptance of Ukrainian identity and independence gives us no room for maneuvering. This is more about a framework in which Putin can restore his power over Ukraine, using the fact that the doors to Western institutions would be closed to Ukraine. The more signs of solidarity Ukraine has from the West, the lower the chances that Putin invades.

Russian state leadership are incapable of viewing Ukraine as a real playwright in its own drama.

This gives Ukraine and the President stronger responsibility not to say things or act in ways that would suggest that Ukraine would be helpless without someone else’s support.

Peter Dickinson: It is fascinating to look at the way how Zelensky, being in many ways a citizen of the Russian world, who came to power talking about negotiations with Putin, has changed his position drastically. He realized that Putin does not want peace with Ukraine. His transformation reflects the realities of the conflict.

Internews Ukraine and UkraineWorld.org publish a regular roundup of anti-Western messages in Ukraine aimed at undermining trust in democracy and in Ukraine’s integration...
PODCAST
December 7, 2021

On the day of the Biden-Putin talks, we asked a well-known British expert James Sherr if the Russian attack on Ukraine is real.