July 11, 2018
For a traveler who is likely to trust TripAdvisor in choosing destinations for a holiday, a tour to Ukraine will likely get him to the exclusion zone around the Chornobyl nuclear power station. This, and the Tunnel of Love in Klevan rounds off the top four places to visit. Even in the Water & Amusement Parks category, an abandoned amusement park in Pripyat (which is close to Chornobyl), gets first place. Yet no matter how attractive the idea of the aftermath might be, Ukraine has more reasons to attract the attention of green, gastronomic and city tourists. 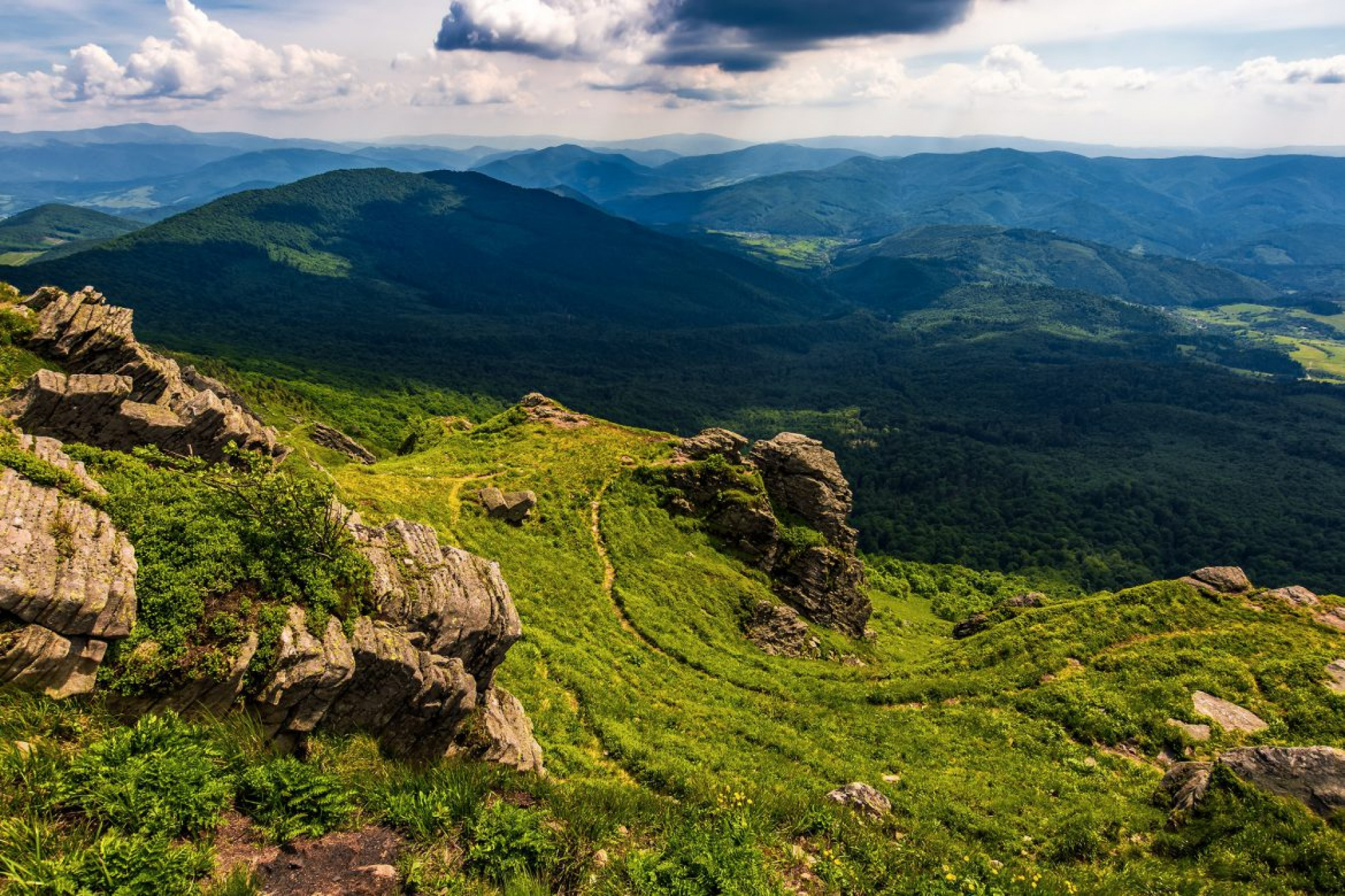 International tourism in Ukraine is currently developing thanks to the activity of Ukrainians themselves, traveling more within the country. This brings up excursion and city tourism, attracting visitors eager to discover history, architecture, and gastronomy. Lviv, Odesa and, recently Kyiv, all drive more and more short-stay international visitors. As Ukrainians test new destinations and create demand for a better service, international tourists follow and discover Kamyanets-Podilsky, Ternopil, Chernihiv, Poltava, and other places.

The Carpathians are known by international tourists mostly from the Bukovel resort, thanks to the developed infrastructure, accessibility and the variety of attractions, as well as the affordable cost.

Tetyana Oliynyk, co-founder of Karpaty Travel company, tells _UkraineWorld _that Ukraine has a unique heritage to attract motivated tourists, but not enough services to make it a mass movement. However, perhaps that is not actually needed, she points out. " Ukraine is already an attractive destination for a mass tourist and the more low-cost flights that enter – the better for business. A flight of around 2-4 hours from virtually any European capital, and a satisfactory level of service and entertainment are available in the largest Ukrainian tourist centers – Kyiv, Lviv, Odesa". Outside the main roads, the country is absolutely unprepared for an inflow of tourists. Meanwhile, it is those little cities and remote destinations, that can offer authentic cultural experiences, precious for a motivated, non-mass tourist. "First of all – it is the authenticity of impressions: quite a lot of communities in Ukraine (say, the Hutsuls in the Carpathians, or the Romanians of the border regions) have retained an authentic way of life and original traditions rooted in their pre-Christian times. Also the 'carnival' traditions, particularly during the winter holidays – celebrations of Christmas, Epiphany, Malanka. Gastro-tourism is also developing actively, treating people with traditional cuisine and a new trend for craft production of organic products: cheeses, meat products, snails and trout farms, beer," she says.

" Green tourism is another emerging segment, which has grown significantly over the past few years, but mostly in the western part of the country. This includes village and gastronomy tours that provide tourists experiences of nature, cuisine, and traditions, and are especially interesting for international tourists. While seaside is not likely to attract them, as the Black Sea is not that salty and the infrastructure remains very poor," Serhiy Pidmogylnyy, a coordinator of Greenways Ukraine, tells UkraineWorld. 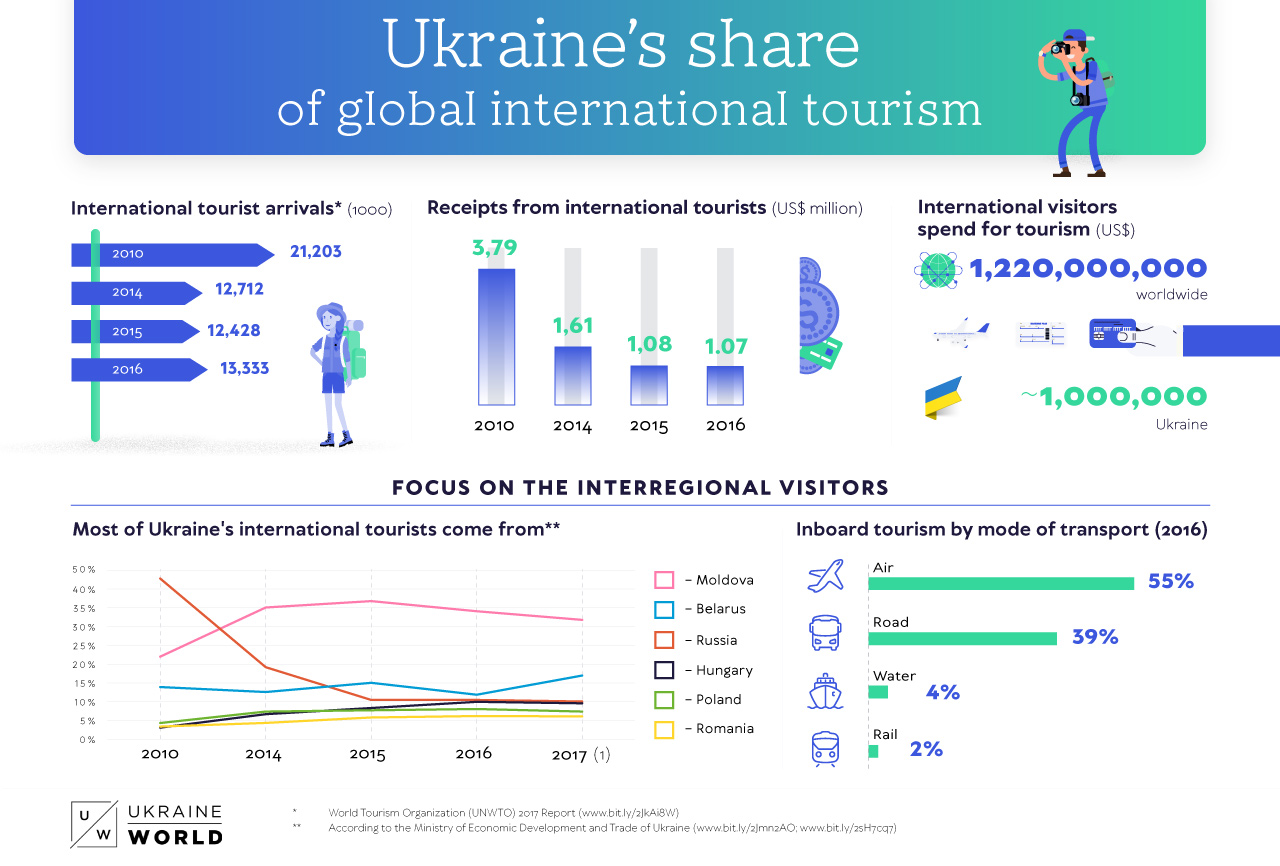 According to the World Tourism Organization (UNWTO) 2017 Report, the number of international tourists coming to Ukraine grew by 7% in 2016 compared to 2015, when the country welcomed 13.3 million visitors. Despite the positive dynamics, this number is almost half of the pre-war figure : in 2013 over 24.6 million international tourists (including 877,000 from Russia) came to Ukraine, while the next year just 12.7 million dared to cross the border (including 584,000 from Russia).

If Ukraine plans to still remain on the list of emerging economies by that time, then at least tourism can stand to gain from that. Tourism ranks as the world's third-largest export category, with spending by international visitors reaching US$ 1,220 billion in 2016. Ukraine's modest share of the market reached a little over US$ 1 million in 2016.

Working for the interregional visitors

At the global level, about four out of five arrivals take place within travelers' own regions. According to the Ministry of Economic Development and Trade of Ukraine, most of Ukraine's international tourists come from Moldova (31.8%), Belarus (16.6%), Russia (9.8%), Hungary (9.6%), Poland (8.7%), and Romania (6.3%).

In order to grow the number of visitors, both internally and internationally, Ukraine has to improve its accessibility. According to the UNWTO report, 55% of international travels are made by air and 39% by road. Thus, growing the number of low-cost flights and road repairs, which Ukraine needs greatly for Ukraine, is the first rule of attracting tourists.

According to the information on the popular tourist site The Culture Trip, another complication about Ukraine is that cash still remains the preferred method of payment, there is a lack of international ATMs and the digital payments market has so far failed to meet growing demand.

As Serhiy Pidmogylnyy also notes, Ukraine lacks broader and more effective presentation in tourism globally. Despite numerous exhibitions and events and even an amount of certain state grants, these opportunities remain largely unused due to time-consuming bureaucracy. ProZorro is helping to reduce holdbacks, but the problem did not appear just recently and needs time to be solved.

Despite these implications, Ukraine remains a largely undiscovered country, and one of Europe's last genuine travel frontiers, a nation rich in colorful tradition, warm-hearted people and off-the-map experiences, as the most popular Lonely Planet describes it. Welcome!

HBO mini-series Chernobyl accurately replicates Soviet life of 1986. While many locations shown on the series are real, they do not always look the same. Our journalist...
PODCAST
May 15, 2020