July 20, 2022
The story of Natalia Zarytska, the wife of a soldier of the Azov regiment, who is currently in Russian captivity. 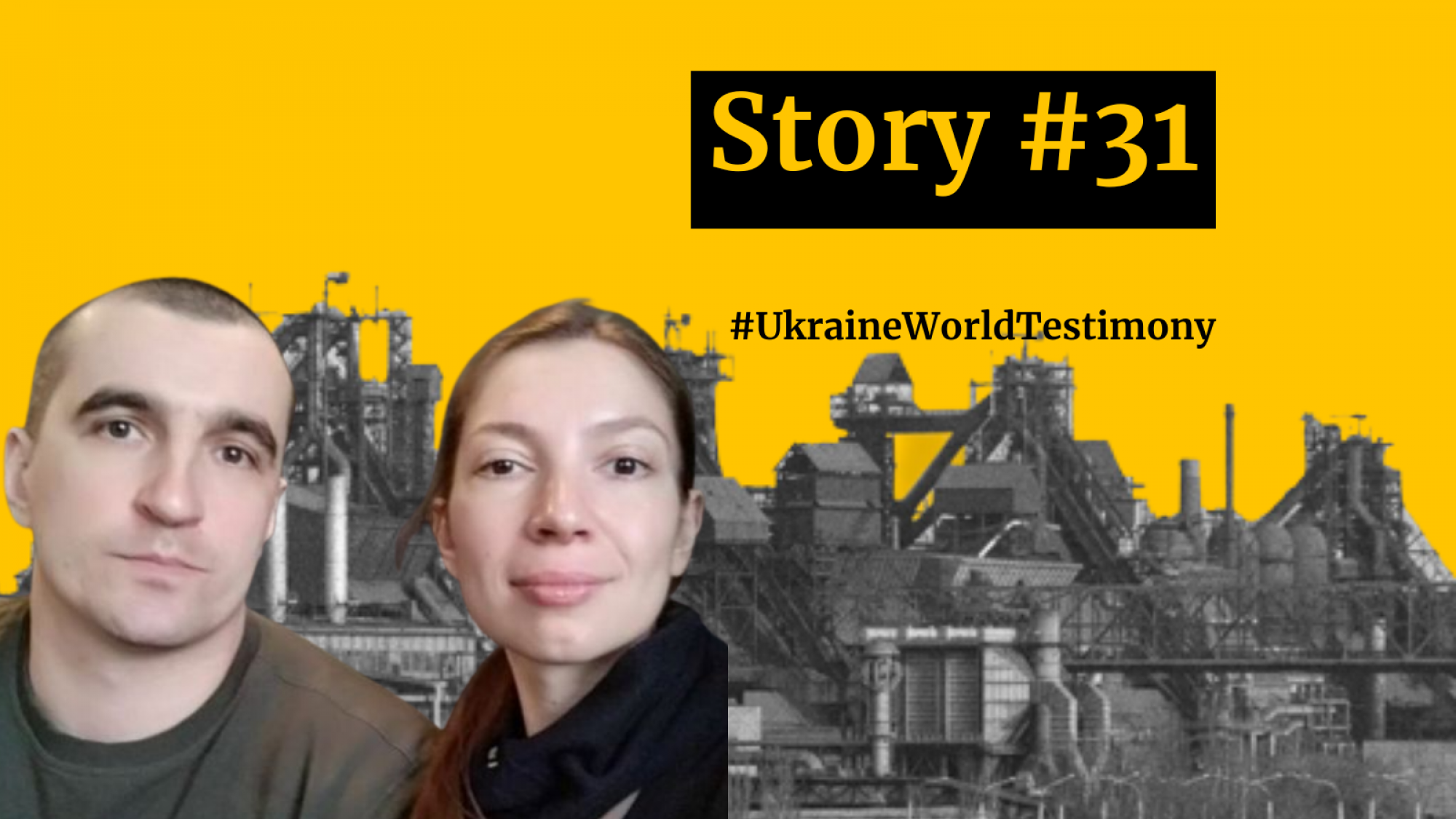 How did the war begin for you?

For us, the war started long before February 24. It started for us in 2014. Being ready for war is like being ready for the death of a loved one. A person is sick and you know they are going to die, but when the person eventually dies, you still find yourself unprepared for the end. Still, the stage of denial, grief, despair, and acceptance comes. It was the same on February 24, we were aware that the invasion would happen, but when it happened, we were shocked.

In general, our relationship with my husband is mostly a long-distance relationship, because he is a military man. We used to write to each other a lot every day. In the morning, in the afternoon and in the evening, sometimes at night.

On February 24, there was an extraordinary noise in Kyiv, at 5 in the morning the city does not behave like that. I had food supplies, so I began to call my single friends and advise them to quickly stock up on food and everything necessary. I called relatives and close people, and informed them about the war. Then I opened the taps and started stocking up on water.

When was the last time you saw your husband?

On the day of the full-scale invasion, he was already in Mariupol on duty. The last time we saw each other was on February 14, on Valentine's Day, when I visited him. We spent three days together.

I understood that at that time there were already enemy troops on the border, then the figure of 150,000 was spoken about. My mother was afraid, she asked me not to go to Mariupol, considering the situation. I asked my husband when it would be better to come to him, given the risk of war. And he said this: "Natalia, the best time for a soldier is always now." As soon as he wrote this to me, I bought tickets and went to see him the next day.

How did the events develop further?

For the first 3-4 days of the war, communication with my husband was normal. At the time, Kyiv suffered even more than Mariupol. Later, the Internet began to break, the connection began to disappear. My husband warned me about it, I knew it was possible. The connection sometimes disappeared for two weeks. Since my husband has been in the military for a long time, we have a habit of writing in a diary format. Before a message, we write the date and time. I wrote to him every day, there was no connection, and when it appeared, 100-200 messages came at a time, and we learned how each of us lived these days.

Sometimes he called me, but I didn't hear anything because of the heavy bombing in the background. There was a constant hum. If anyone wants to know what hell sounds like, this is what I heard on the phone.

I was once told that there was a 99.9% chance my husband was dead because there was heavy shelling where he was. I didn't believe it, so I kept texting him anyway. I endured 13 days in such confusion, and on the 14th I called one of his commanders. He confirmed to me that my husband is alive and even healthy.

My husband said that Russia could drop 500 heavy air bombs and 40 missiles on Azovstal and destroy them in just a few hours. But apparently Russia takes some pleasure in prolonging the torture.

My husband left Azovstal on May 17. At the time, he wrote to me that they would probably be taken to the village of Olenivka, to the so-called DPR. There is an old colony where they will be kept.

He wrote me two terrible letters. When these letters arrived, I was in Ankara. I and three other military wives went to President Erdoğan to ask for an extraction for our boys so that they would stop being bombed and be allowed to leave.

I read these letters directly at the Embassy of Ukraine in Ankara. There was a terrible chronicle. He wrote that in the platoon in which he served, 24 of the 32 men were killed. 17 of those 24 were killed in one moment. The occupiers used phosphorus bombs.

He also wrote that two boys died in front of him. It was the worst day of his life. One guy was bleeding because his legs were torn off. My husband asked me to find his family, but I still haven't found them.

When my husband left Azovstal, we were given a few minutes to chat. He called me from someone else's number, and we spoke in secret words, the meaning of which only we know. We were prepared for the fact that one day either he or I might find ourselves in captivity or some other situation where we would have to speak in such a way that no one else would understand anything.

When leaving the plant, they were allowed to take one backpack and put the most necessary things in it. My husband told me that he would take two books with him: English and German textbooks. He was simply learning these languages. Now I am punishing myself that I did not refuse him to take these books, because for the English he can be called a fascist, and for the German - a neo-fascist. Russian occupiers are not guided by logic, any detail can anger them.

On the importance of publicity

My husband was very surprised that I went to Ankara for his sake. I told him: just imagine, I am the wife of a simple soldier. And how the officers' wives fight for you!

My husband is very grateful to us for this effort, he says that the wide resonance does play a role. Russians use the methods of the Middle Ages: they torture, destroy people, use prohibited types of weapons, call the war a special operation. However, they do not realize that this is the digital age, that the evidence base is irrefutable, that this will not be forgotten. The next generations will definitely know about these crimes, it cannot be hidden in the archives of the KGB. We need resonance, the whole world must know about Russian war crimes. It's not just a war, it's genocide.

Russians do not fight soldiers directly. They are afraid of Azov, and the marines, and intelligence, and the SBU, and territorial defense. Wherever they see armed Ukrainians, they run away. They fight mostly with the civilian population, and even then, they tie people's hands and shoot them already tied.

We have to keep talking about it. Let the whole world know. Russia has now put the entire global security architecture at risk. Everything that many states have worked up over the years (values, global development) is simply being destroyed by the hands of one state that blackmails everyone with a nuclear disaster.

What fate awaits the prisoners of war?

The stay of our troops in Azovstal is unprecedented. Shelling was conducted from all sides: from the ground, from the air, and from the sea. Who would have thought that after this, our soldiers would not be rehabilitated, but captured. For more than a month, we do not know where they are, in what conditions.

We have no permanent contact with them, we cannot send them parcels, the Geneva Convention does not work, Russians ignore it. I'm surprised this is happening in the 21st century. It is not surprising that Russia is doing it, it is in their blood. But it is strange to me that the whole world cannot help this. I am grateful to all the countries that help, but unfortunately this help is not enough.

I am convinced that if the conditions in which our boys and girls are kept now were at least close to what they should be, Russia would have shown this a long time ago, would have let the international community there. But this is not happening.

Currently, we do not see any results, we cannot contact the captives, but I hope for the best. It is obvious to me that right now good is fighting evil, light is against darkness. I believe that this evil can be overcome by unity. The authorities and the international community should unite and act as a single shield.

During the time that our heroes are in captivity and we cannot contact them, my husband's mother died. She could not stand it, did not wait. But I, as well as other women from the Council of Wives and Mothers of the Defenders of Ukraine "Women of Steel", believe and wait.

Concerns over Russia's possible new invasion of Ukraine are rising in the West. But Ukrainians have lived in a reality of ongoing war for years. What do they think...
VIDEO
May 4, 2020