Story #53. Life Under the Sounds of Shelling

October 7, 2022
The story of Tetyana Duchych, who survived the fighting near Hostomel. #UkraineWorldTestimony 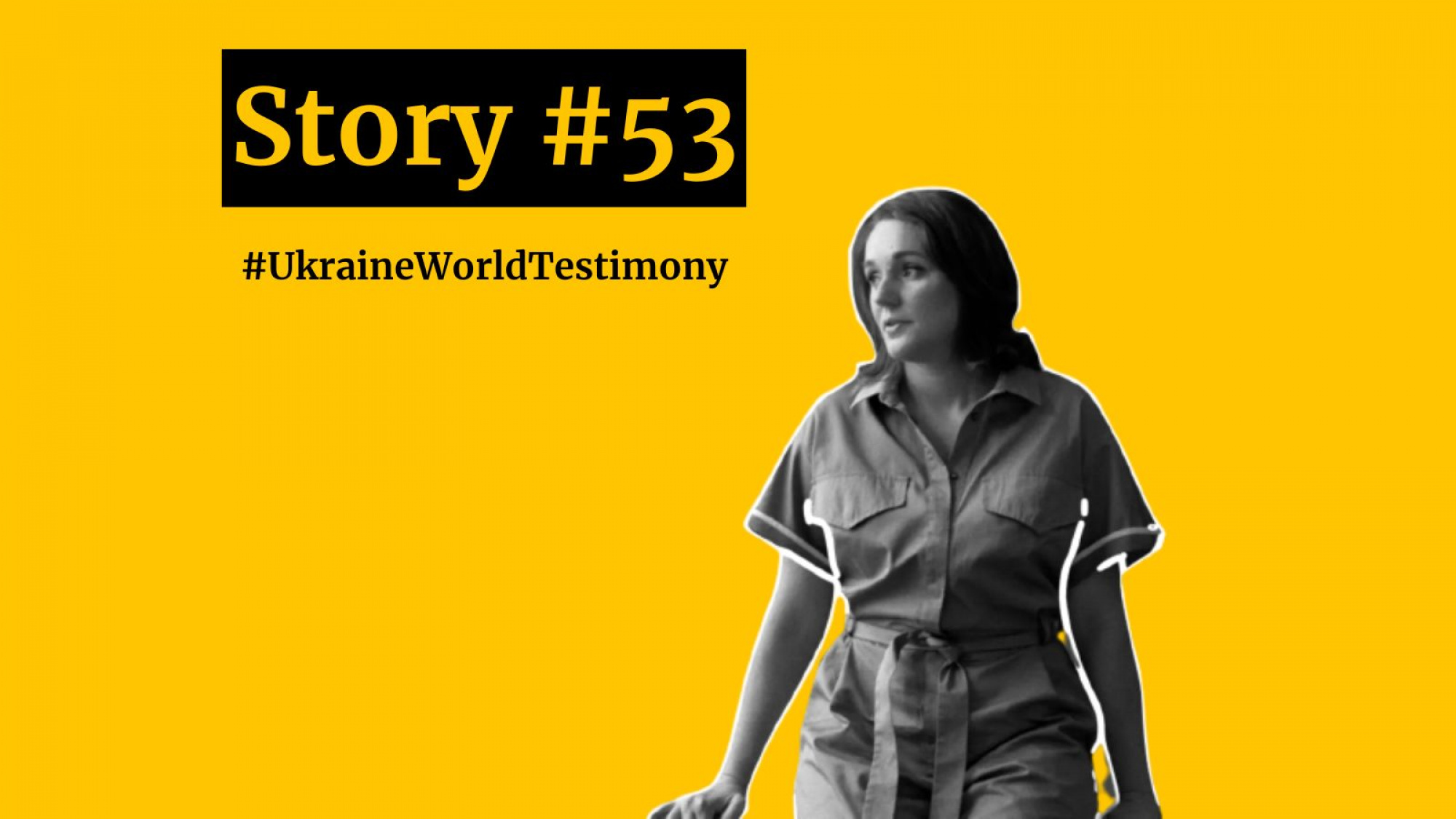 The war began for Tetyana with queues at the supermarket. She did not panic. Fortunately, in stressful situations, she is used to thinking rationally and not giving into emotions.

As the sounds of explosions at the Hostomel airport rumbled outside, Tetyana continued to work online and did not leave her home. She is a lawyer, so she spent most of her time providing pro bono advice to Ukrainians for free about going abroad and coping with other challenges of the war.

Tetyana's days and nights were spent surrounded by the sounds of gunfire, where at some points explosions would ring out every 5 minutes. However, she believed in the Ukrainian Armed Forces and distracted herself from bad thoughts by recording Instagram stories as a living war diary and consulting with clients.

Tetyana's neighborhood was completely surrounded by Ukrainian checkpoints, so she was not afraid of Russian tanks breaking through.

Shops in Tetyana's neighborhood shut down on the 3rd or 4th day of the war. She had to go to the city to buy groceries. Not knowing whether shops are open in Kyiv and what the situation was like there in general, Tetyana went to find out.

The road, which had always been packed, turned out to be completely empty. Tetyana drove on it alone. It was like some kind of apocalyptic scene. Tatyana reached the nearest district of Kyiv, but all supermarkets were closed. There was no place to refuel her car either.

Having bought nothing, Tetyana turned around to go home. On the way, she gave a lift to a friend who wanted to go to her parents in another city. Tatyana wanted to take her along the Zhytomyr highway to the place where her relatives were to meet her. But Ukrainian troops stopped the car and said that fierce fighting was going on 5 km from Kyiv, and that the bridge had been destroyed. This made it impossible to enter and leave Kyiv on that road.

Tetyana asked her friend if she wanted to go back. But she replied that she wanted to get to her loved ones and would walk through forests and fields. Tetyana failed to convince her friend to stay, although saying goodbye was scary.

Tetyana managed to find groceries for herself in nearby villages, where people ran farms and had vegetables, eggs, and other home-grown things. However, food for her cat Casper became a problem.

Therefore, Tetyana decided to go in search of food. Since she only had gas left for a one-way trip, she decided to wear warm exercise clothes. If there was no cat food or gasoline in the city, Tetyana would simply run the 10-15 km back home.

Fortunately, Tetyana found both a pet store and food for herself. On the same day, for the first time in a week, she managed to refuel her car.

Tetyana also learned there were dogs nearby who had been left behind by their owners and had not eaten anything since February 23. After cooking porridge and taking water for the dogs, the woman went to them. Arriving at the address, Tetyana met Ukrainian troops, who informed her that enemy fire was taking place 500 meters from the dogs. It wasn't possible to feed them.

The next day, after waiting for a lull in the shelling, Tetyana set out for the dogs. She could not get past the closed gate into the yard, so she threw the food over the fence.

Through a gap in the fence, Tetyana made sure that the dogs had eaten. Tetyana also fed other dogs and cats she saw on the streets of her district.

On the 12th day of the war, the situation in Tetyana's area worsened, and the intensity of bombing increased. Casper even hid in the bathroom and refused to come out. On the 14th day, all residents of their district were forcibly evacuated. The military warned residents that there was intense combat approaching and that their homes could be  completely destroyed. Tetyana had no other choice but to go.

For some time, Tetyana and her cat moved to live with her friends on the left bank of Kyiv. She also took care of the animals that she was feeding. She gave their addresses to a large volunteer animal evacuation organization.

While living with friends, Tetyana found out that the Russians had fired upon her neighbors' house. She then understood why it had been so important to evacuate. Fortunately, unlike many other buildings in Kyiv Region, Tetyana's house survived. After the Russian invaders were finally expelled from Kyiv Region, she returned home.

Read a new issue of a bi-weekly newsletter with monitoring of Russian activities and influence in Belarus to know more.
VIDEO
June 6, 2022

These are the memories of the family that saw the war from their home in Kharkiv and are now in Poltava.