5 Ukrainian Biosphere Reserves You Have to Visit

June 14, 2019
The biggest virgin steppe in Europe with a safari, the largest valley of narcissus in Europe, a huge, unique post-apocalyptic area, and other amazing places await you in Ukrainian biosphere reserves 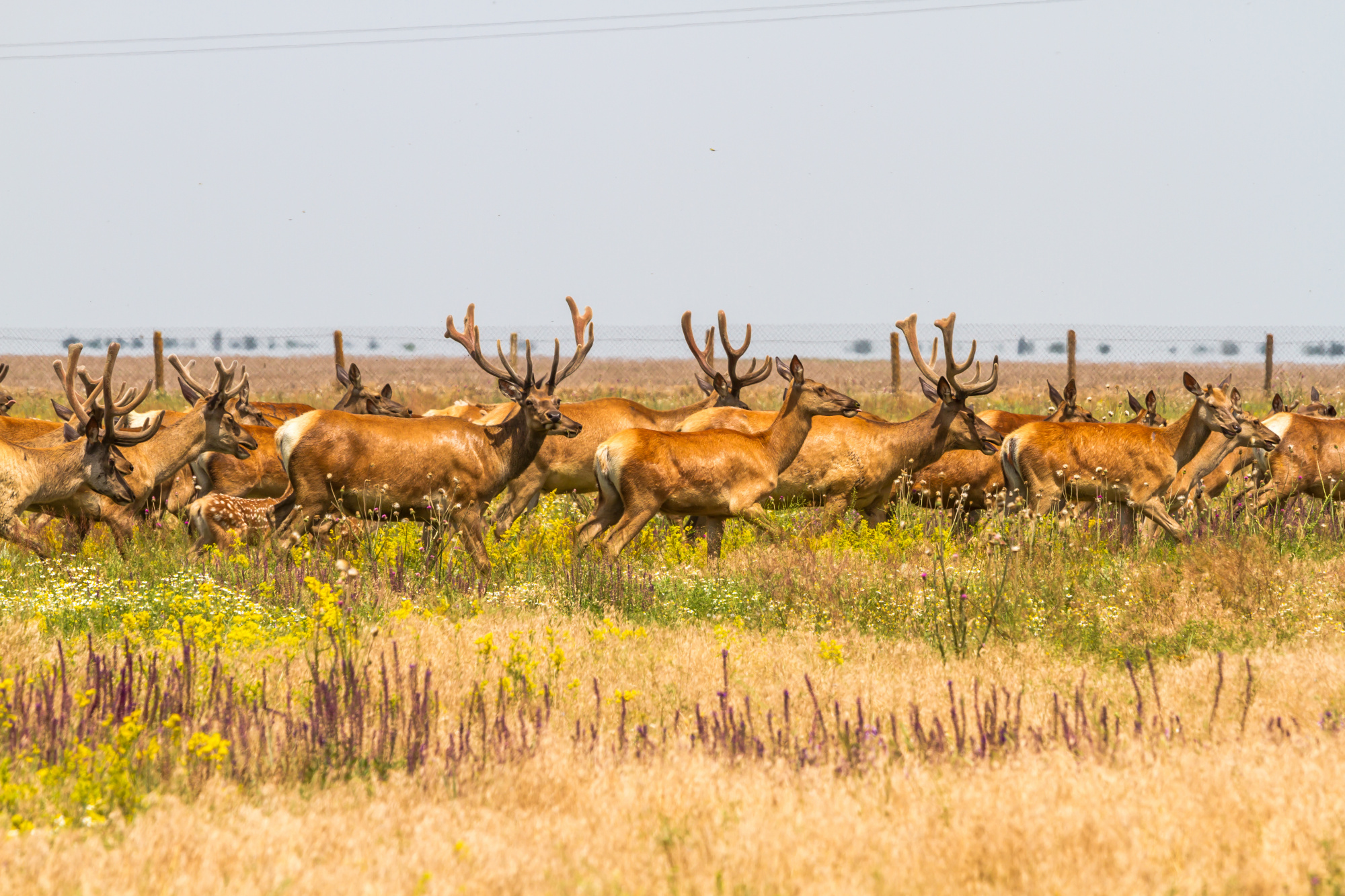 A Biosphere reserve is a territory where unique nature is preserved in its wild or semi-wild state. Nevertheless, tourists are also welcome there, but only in certain zones specially designed for visits in order to avoid harming virgin nature. 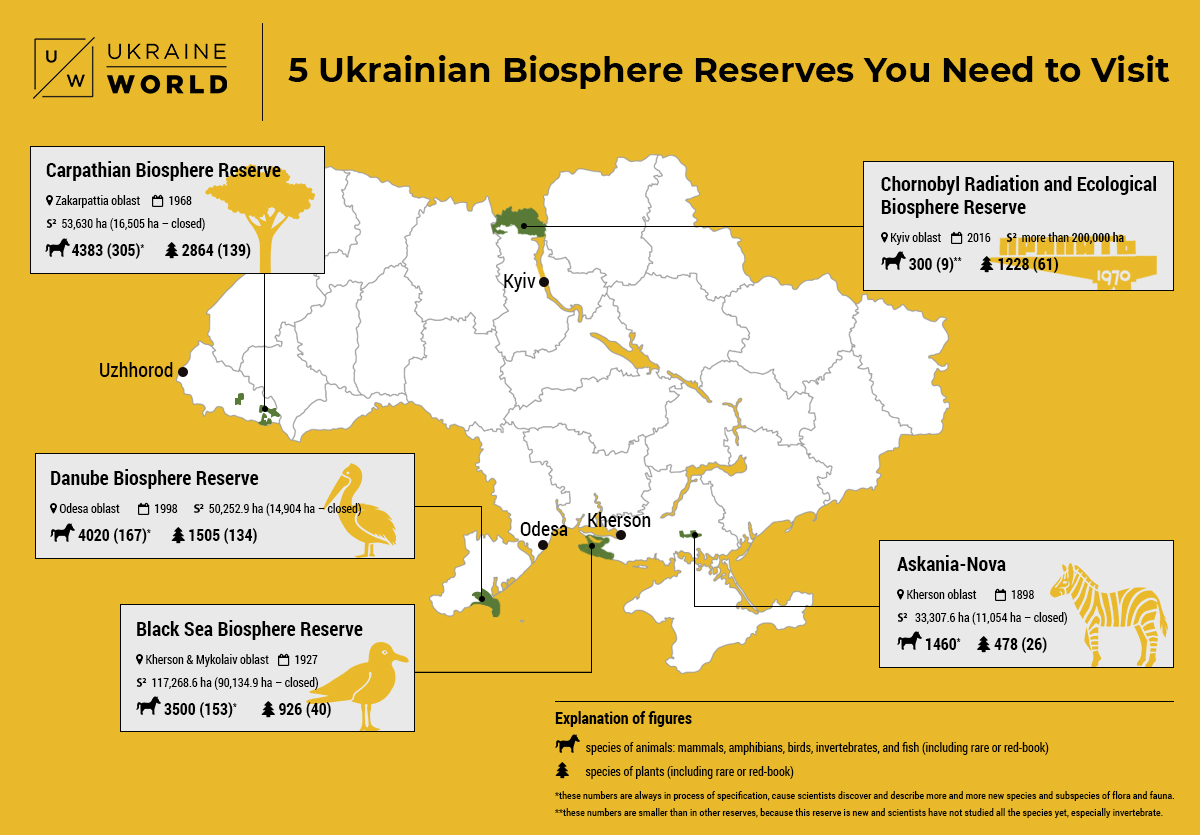 Uniqueness: this reserve has the biggest virgin steppe reservation in Europe – 110 sq.km and the largest group of Przewalski's Horse kept in captivity.

Founded in 1898 by ethnic German Friedrich-Jacob Falz-Fein (1863–1920), this biosphere reserve has the longest history of protection and a developed tourist infrastructure. This territory was named "Askania" by the previous owner, Friedrich Ferdinand von Anhalt-Köthen-Pless, who came from the House of Ascania, a German princely dynasty.

Suitable natural conditions for the ungulates, such as tarpan (exterminated in 1919), were created in Askania-Nova, which is situated in Kherson Region. There are over one thousand species of trees and shrubs. In addition, there is a zoo, where wild ungulates graze in a semi-free environment of virgin steppe – wisent, bison, deer, zebras, llamas, Scottish ponies, antelope, saiga antelope, and also ostriches and hundreds of rare birds. This atmosphere creates a safari effect.

Tourists are welcome to visit Askania-Nova from April 1 to November 10. The reserve offers 5 different guided tours, all of which are 2.5 hours long. The ticket price is 2.5 euro for an ordinary tour or 4 euro for a safari. Souvenirs cost 1 euro and more. There is a hotel for 20 euro per night, and you can also rent an apartment for the same price.

It takes two hours to get to Askania-Nova from Kherson by car. The best road quality is on the route via the Chaplynka settlement.

Askania-Nova is on the list of Seven natural wonders of Ukraine.

Uniqueness: this reserve appeared as a result of the anthropogenic catastrophe and demonstrates a post-apocalyptic period , i.e. the disappearance of man with absolute domination of animals and plants. In addition, only here you can see untouched examples of Soviet architecture with all the accompanying entourage.

Founded in 2016 , this biosphere reserve is the youngest and biggest in Ukraine. It is also the most famous throughout the world due to the Chernobyl miniseries produced by HBO. Its territory was named after the atomic plant in the town of Prypyat destroyed in 1986 by the explosion at the nuclear power plant there.

In the Chornobyl reserve, which is situated in Kyiv Region and occupies 2/3 of the Chernobyl nuclear power plant's exclusion zone, nature itself has created the perfect conditions for animals and plants as soon as man deserted the area in 1986. At that time, the radiation levels rose by several thousand times there. In 2019, radioactivity still poses a serious threat to human beings, especially in the 10-km area around the nuclear plant. But it has little effect on the development of animals and plant populations.

According to scientists, there are more than 400 species of animals, birds and fish in the reserve, including those found in the Red Book. Among them, Przewalski's Horse, wolves, lynx, bears, elks, white-tailed eagles. Most of them are typical for the European forest; therefore, they are extremely important for all European scientists.

Accompanied tourists are welcomed to the reserve all the year round. There are a dozen tour operators, which offer 1-2 days guided tours from Kyiv for foreigners. Each operator has official registration documents and a map of safe territories. They will also give you a dosimeter to measure the dose of radiation near you. The price is 80 euro and more for one day, 200 euro and more for two days per person. There are two hotels and a hostel for tourists there.

You must be at least 18 years old and have your passport on your person to visit the Chornobyl zone.

Uniqueness: this reserve hosts the largest Valley of Narcissus in Europe with the unique plain population of narrow-leaved narcissus. It also preserves the culture of Ukrainian highlanders - Hutsuls, Boykos, and Lemkos. For example, their high-mountain milk sheep breeding and related crafts and traditions have a unique character for Europe.

Founded in 1968 in Zakarpattia (Transcarpathia) Region, this reserve now has 18 scientific and touristic routes. The most popular one is the route which leads to Hoverla Mountain, the highest point in Ukraine. There, you can meet a lynx, a bear, a deer, a wild boar, a wolf, a roe, a small hut, an ermine, an otter, a black stork, a forest strip, a Carpathian triton , etc.

In addition, you can visit the Museum of mountain ecology and history of nature management of the Carpathians, which is the only one of its kind in Ukraine.

Almost 90% of the reserve's area is covered with forest, mostly virgin.

To visit the Valley of Narcissus, you can take a guided tour from Uzhgorod, which will include various places of Zakarpattia. The price ranges from 10 to 30 euro. If you travel on your own you should go the town of Khust and take a bus or a car from there to the village of Kireshi.

Founded in 1927 , this reserve has increased in size from 27,000 to 117,268.6 hectares and consists of three areas – forest-steppe, seafront, and island. It isa benchmark of sandy seaside landscapes. Sandy areas consist of elements like dry terrain, lots of salty estuaries, bays, and collars.

The reserve hosts a total of 29 species of animals from the European Red List, and 124 species included in the Red Book of Ukraine.

Tourists can order a guided tour in the guarded areas of the reserve if they have their own car for that.

The services of a guide will cost 13 euro per hour for a group up to 10 people. To get to the Black Sea Reserve, you should take a car from Kherson to the town of Hola Prystan (42 km) or a bus for 1-2 euro.

Uniqueness : Ukraine looks after processes of the continuous formation of the delta on the reserved territory. As a result, the Danube reserve automatically includes all newborns – islands, spit, etc – and its territory becomes bigger each year. In addition, among the insect species identified on the restricted area, seven were new to science.

Founded in 1927 , this reserve is headquartered in the town of Vylkove, situated on water arteries and is, therefore, called Ukrainian Venice. Among the mammals to be found in the springhead of the Sasyk Reservoir, there are such species as ridge, fox, raccoon dog, badger, stone marten, pies, wood harrow, common carp, European mink, hare, grass squirrel, ordinary hamster, muskrat, and others.

The most suitable way to visit the Danube Reserve is to take a guided tour from Odesa to the town of Vylkove and its surroundings. It lasts 1-2 days or longer. Prices start from 30 euro per person.

If you travel there by river, you must have your passport on your person, because it is not far away from the border with Romania.

Ukraine is rich in unique and picturesque territories. In addition to biosphere reserves, which are the most protected areas, the country has ordinary reserves, national parks, regional landscape parks, protected beams and others.

In total, 6.8% of area of Ukraine area is protected now, while the average level in the EU reaches 18%.

But the greatest expectations are for when Ukraine will be a member of the European Union and its program for saving unique territories named Nature2000. In order to get this possibility in future, it was necessary for Ukraine to join the Emerald Network, which was launched in 1989 by the Council of Europe as part of the Bern Convention. Ukraine joined it in 1999.

Most of these objects are not currently preserved. For example, Tarutynsky steppe - a former military training ground, which now has a low status of preservation, and may be sprouted or burned.

Thanks to Taras Pushkar , PhD in entomology, zoologist at the I.I. Schmalhausen Institute of Zoology of the National Academy of Sciences of Ukraine, for his scientific review

Ukraine Has Its Seven Wonders Too

In 2015 the Ukrainian Parliament adopted bill to introduce a 10-year moratorium on the export of round timber, which came into full force in 2017. The most evident...
VIDEO
December 17, 2020

Lviv is one of the most popular tourist cities in Ukraine. UkraineWorld listed some of its best terraces and rooftop views worth checking the next year.