June 10, 2019
In the last few years, development of aviation has received an unprecedented boost in Ukraine. In fact, Ukraine's Ministry of Infrastructure went as far in its enthusiasm as to advocate for the renovation, or even construction from scratch, of up to 50 airports around the country. Now, irrespective of whether Ukraine actually needs that many airports, this may seem like a long shot. However, is it? 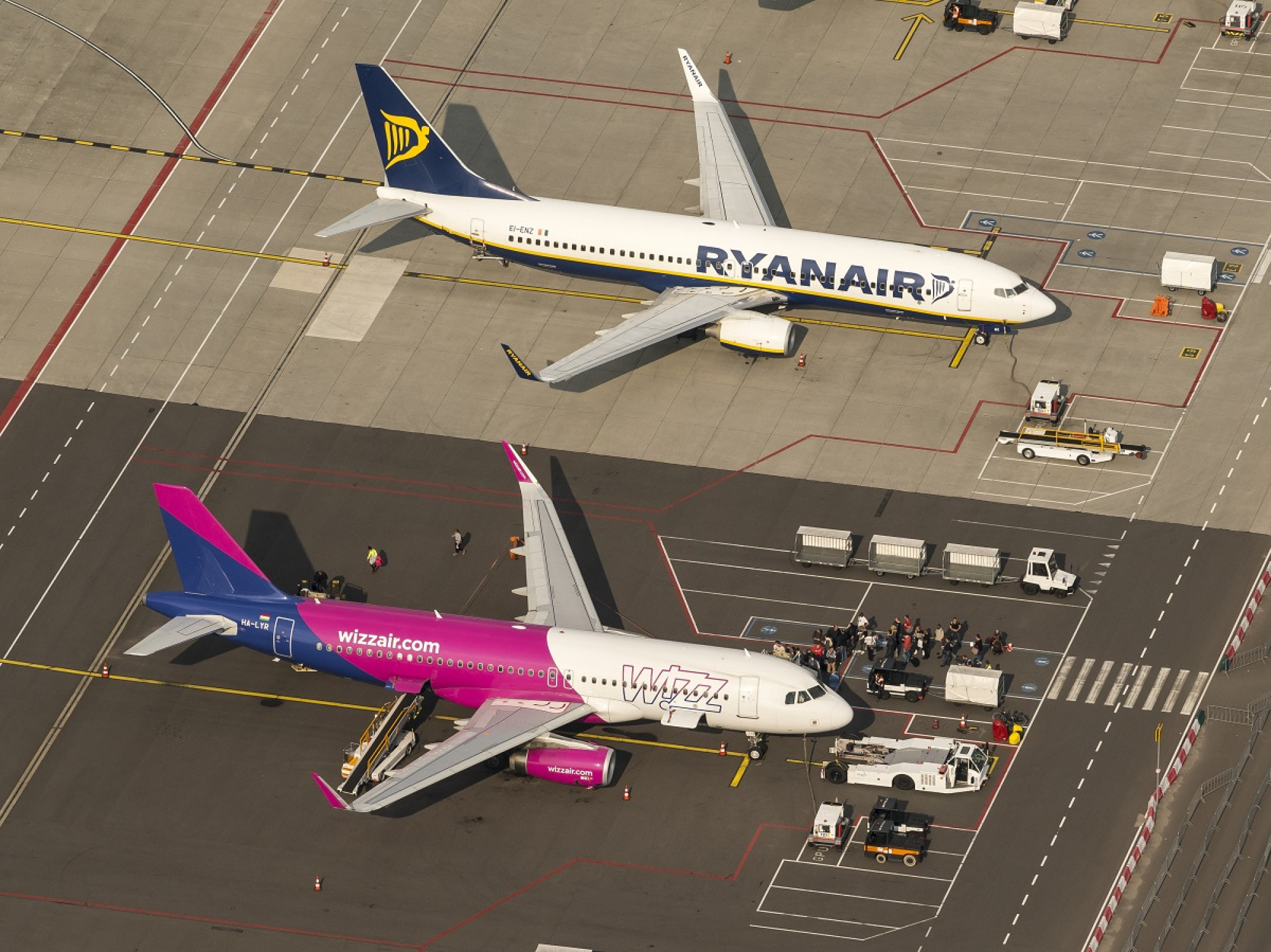 HOW MANY IS ENOUGH?

To be able to gauge the ideal number of regional airports Ukraine should be developing, it makes sense to rely on three specific criteria. These include the country's total area (the greater the span, the greater the number of airports that are needed), its population (the larger it is, the more promising the potential demand) and GDP per capita (the higher it is, the more significant the purchasing power in future). Of course, there are many other details, like the availability of specific time slots at airports, as well as their technical condition to begin with, but these three are key.

Results of such research may not necessarily show that Ukraine indeed needs fifty airports - not now, not even in the midterm perspective. However, if we take a look at Poland, Ukraine's closest neighbor to the West, we'll see that its 13 most active airports served an estimated 45 million passengers in 2018. Now, Ukraine's area is roughly twice as big as that of Poland, while its population is compatible with the Polish population. At the same time, the total number of passengers served by Ukrainian airports in 2018 hardly exceeded 20 million people.

Simple math suggests that, according to the first two criteria, Ukraine could easily stake on the development of around 25 regional airports (compared to the 7-8 that are currently operating, at best).

GDP per capita, the third criteria, is still a problem. However, based on the data of the World Bank, it has grown by almost an entire quarter in just three years, from 2014 to 2017. Moreover, the dynamics of passenger traffic at Ukrainian airports from the last couple of years unequivocally shows that Ukrainians are financially equipped to travel. This is sufficient to prove that development of regional airports makes economic sense. 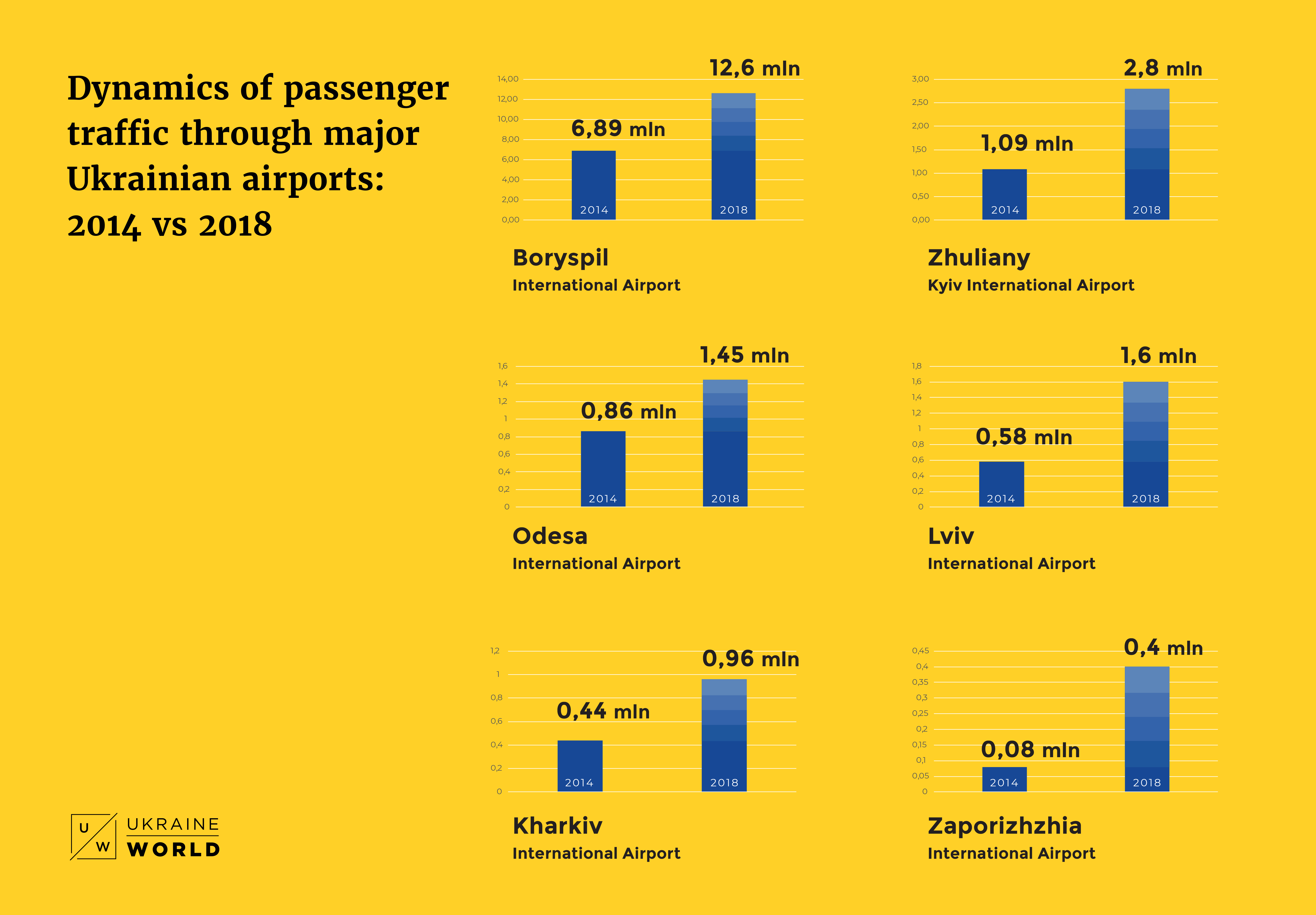 THE ROAD TO TAKE

Basically, there are two strategies that could in theory be employed for that particular purpose. The first one is expanding the network of domestic air connections. However, this scenario has little to no chances of being implemented in Ukraine's current economic realities. The cost price of domestic flights simply makes them unprofitable, and the purchasing power of Ukrainians is not even remotely sufficient to make domestic airlines operate at least at break-even level. This can be easily confirmed by some recent developments in the sector. The long-awaited connection between Kyiv and Uzhhorod was terminated just two months after its launch because too few passengers could afford a ticket. This further translated in the connection's unprofitability and its subsequent cancellation. Now, it should be admitted that several companies, like Ukraine International Airlines and SkyUp, do actually have some domestic flights, because they are able to compensate their losses in the domestic market with profits made on charters and international routes. However, they too are hardly willing to fly to any regional airports other than Lviv, Kharkiv, Odesa and maybe Dnipro, which is a world away from the mentioned 25 airports.

The above leaves Ukraine with the second choice, which comes down to attracting foreign low-cost companies.

Think of it. The crux of the strategy pursued by European low-cost companies comes down to using regional airports as much as possible, since this significantly cuts their expenditures. Indeed, unlike in large aviation hubs where the taxes and fees a company needs to pay are very high, payments are considerably lower in airports that do not see as much demand but still need a sufficient inflow of cash to operate. This is exactly why low-cost companies like Ryanair, Wizz Air or Easyjet fly to Gatwick and Luton instead of Heathrow, to Skavsta instead of Stockholm or to Beauvais instead of Paris Charles de Gaulle airport.

Thus, when applied to the Ukrainian market, a similar strategy could become a perfect basis for an economically sound trade-off. European low-cost companies would be able to harness profits at Ukrainian airports where their larger brethren, like KLM or Lufthansa, have no economic incentive to fly. At the same time, Ukrainian regions would benefit from the creation of numerous new jobs, an influx of tourists, and (in the event local authorities manage to fully seize the opportunity) European investment into regional economies. 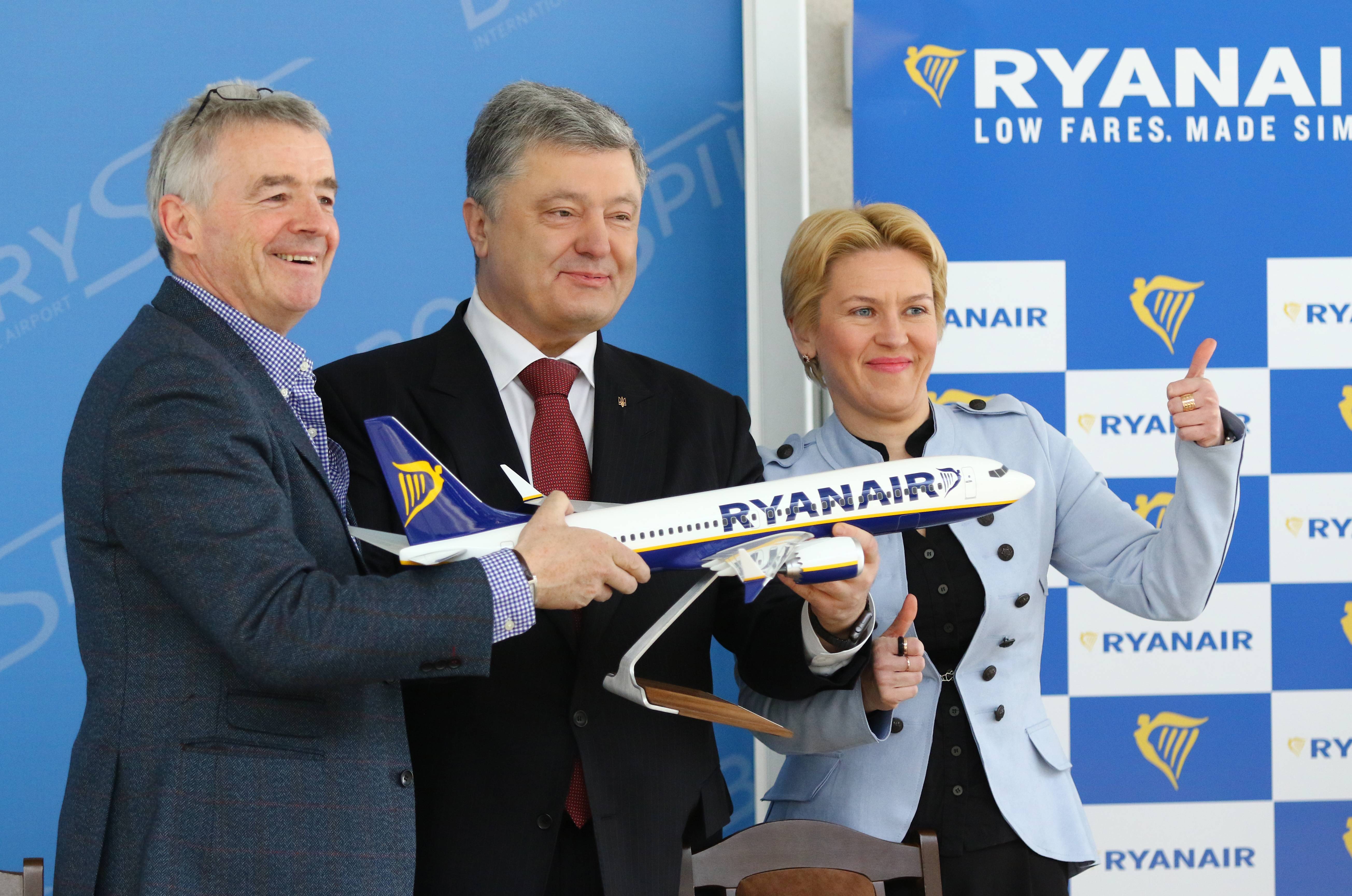 At the time being, Ukrainian customers are able to enjoy the services of two big European low cost companies, namely Wizz Air and Ryanair. Some of their competitors, like Vueling or Pegasus, are also present on the Ukrainian market, but they offer only one or two connections, most often from Kyiv. Many other low cost airlines, including Norwegian, EasyJet and Volotea do not fly to Ukraine at all. However, even Wizz Air and Ryanair fly to a very limited number of Ukrainian airports, namely Kyiv, Lviv, Kharkiv and Odesa. This leaves a long way to go to the mentioned 25 airports and, therefore, it seems like an enormous field of opportunities, especially if we bear in mind that Ryanair, for instance, flies to a stunning 29 Italian airports. However, there must be a reason why European low cost companies are not rushing to Ukraine's regions. Is there something wrong with airports in Chernivtsi, Ivano-Frankivsk, Poltava, Dnipro, Zaporizhzhia, Kherson, Uzhhorod, Rivne, Zhytomyr, Vinnytsia and other Ukrainian cities?

The most honest answer would be yes and no.

Yes, because the technical condition of most Ukrainian regional airports leaves much to be desired. For instance, a frequent problem is the unsatisfactory condition of the runway, which makes it impossible for a given airport to receive certain types of aircraft. In this sense, Ukrainian authorities, both central and local, should understand the volume of preparatory work that needs to be done for the successful attraction of companies. No, because development of aerial navigation between EU and Ukraine generally depends on a big stumbling block - the impossibility to sign the Treaty on Open Skies. Now, contrary to what one might expect, it is the EU and not Ukraine who is not ready to sign this Treaty. Brexit has revitalized the standoff between the UK and Spain over Gibraltar, and as long as this issue has not been solved, the signing of the document will remain postponed. The Treaty would lift all limits on the number of flights that can be operated between EU and Ukraine and so boost development of aviation in the latter. As of now, however, the number of flights is strictly limited. Being in the position of a hostage of circumstances, Ukraine can do nothing more than to wait until UK and Spain agree on their differences.

INVISIBLE HAND OF THE MARKET

While the above may create some serious obstacles for the development of Ukraine's regional airports, the basic economic rule – that of demand and supply – creates incrementally favorable conditions for the expansion of European low cost companies into Ukraine's regions. Below are the three key points in this respect.

First, the logic behind the geography of destinations currently operated by Wizz Air and Ryanair from Ukraine is quite eloquent. If we take a look at the route map offered by Wizz Air, we shall see that 17 out of 30 connections the company operates from Kyiv, Lviv and Kharkiv are situated in Poland and Germany. These two countries also happen to be the first and third most popular destinations for Ukrainian workers, as well as in terms of people-to-people contacts. Ryanair seems to be pursuing the same logic, too: the company offers 24 connections between Ukrainian, Polish and German cities versus only 15 other connections. Now, working in these countries has always been more popular in Ukraine's West rather than the East, which has traditionally been more interested in job opportunities offered by Russia. The latter trend, however, has been flagging against the backdrop of Russian aggression, so, Ukraine's East can be expected to reorient itself on Western neighbors, too.

This means that there is a huge vacant niche in Ukraine's Eastern and Southern airports, including Kherson, Mykolaiv, Dnipro and Zaporizhzhia, that is waiting to be filled.

This is all the more important, given that airports in Ukraine's East and South are significantly fewer numerically than those in the West, while the density of population there is significantly higher. 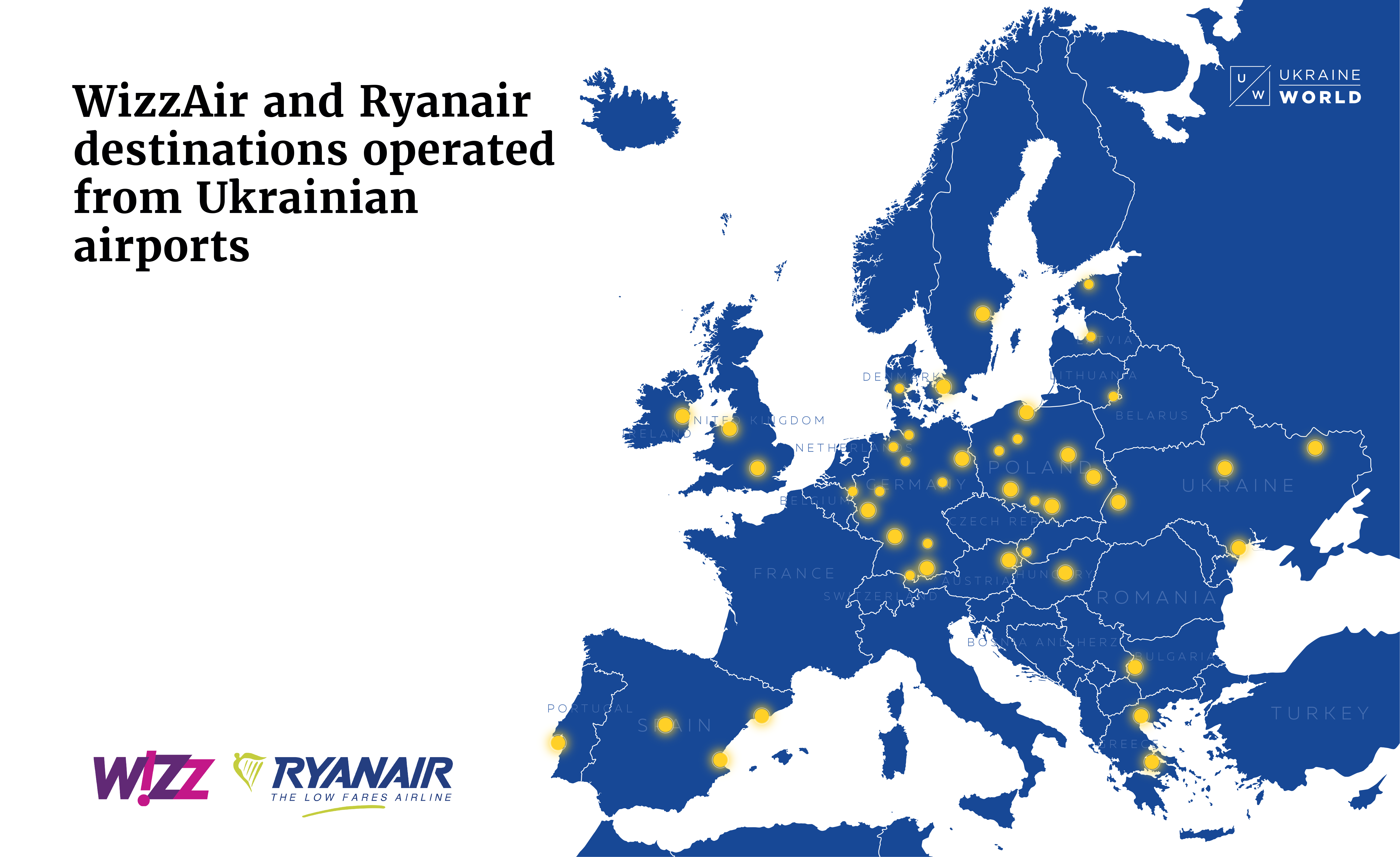 Secondly, there is an entire array of destinations that Ukrainians have long been anticipating to see on route maps of European low-cost airlines. For instance, there is virtually no direct low-cost connection between Ukraine and the Balkan states, like Croatia, Montenegro, Albania or Slovenia. At the same time, these countries offer competitive recreational packages that Ukrainians have been consistently showing growing interest in. As of now, however, these destinations are only accessible by charter flights or with several stopovers, most often as far as Brussels. The other heavily requested direct connections are those with Western European countries, like Italy, France and Great Britain.

Finally, as already mentioned above, the financial standing of Ukrainians has been consistently improving since 2014. Hence, while in the past it made sense for European companies to fly to the Ukrainian capital and several of the richest cities at best, they are now facing significantly elevated demand in many other Ukrainian regions, too.

All in all, no matter what regulatory or technical obstacles might exist, development of Ukraine's regional airports is a long-felt need. The realities of the Ukrainian market dictate not only the level of interest, but also the necessity, to develop regional aviation. In the circumstances when this can have a positive effect on Ukraine's regional economies in general, the issue should be an unequivocal priority of the Ukrainian authorities.

5 Ukrainian Biosphere Reserves You Have to Visit

2019 was an unusual year in Ukrainian politics. The spectacular victory of Volodymyr Zelensky and his political force at both the presidential and parliamentary...
Ukraine Explained
May 3, 2019

Ukrainian food is delicious but still not well-known around the world. Here is a brief overview of the 10 most outstanding Ukrainian dishes.