June 4, 2018
Can culture survive in the war zone of Donbas among industrial cities? Three activists in the region are proving that it can. Here are stories of people in Donbas who are using culture as a tool to challenge negative perceptions of the region and fight for positive change. 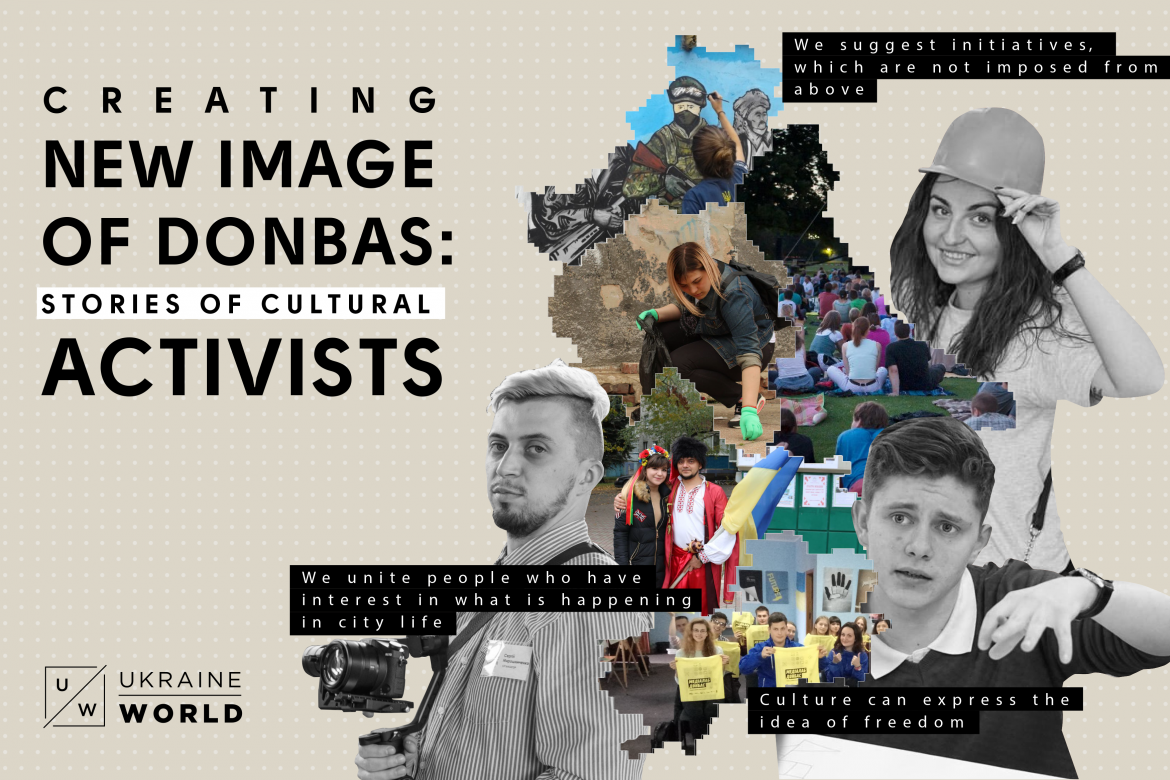 Denys Rudenko is an internally displaced person who came to Bakhmut in 2015 from Horlivka, a city in Donbas occupied by the "DNR". When he's not studying psychology at the local university or working at the radio station, Denys is active in a local cultural organization, the Space of Ideas "Workshop".

"When I came to Bakhmut, I understood that my new life was starting here and that I needed to be active so that I wouldn't lose it like I lost my last one. I wanted to be engaged in social activities to show people that they should appreciate what they already have," Denys said.

He began his activism with the support of the Ukrainian army. He helped to make camouflage nets in the organisation "Ukrainian Bakhmut." Later, he was invited to Workshop. There, Denys has organized multiple activities, such as street art projects and movie showings at open-air cinemas. Two years ago he took part in the organisation of free computer literacy courses for the elderly, in which young instructors work to adapt older people to the modern world. Courses also help instructors to practice in setting up communications and explaining complex things simply.

Denys believes that such cultural initiatives could change the perspectives of people in the region. "Culture can express the idea of freedom. Our people used to live under ideas dictated by a Soviet mentality; those ideas set out a certain path in life for people, but not one that they really wanted."

"Culture is able to resolve the differences that divide people. It does not sort us into good people and bad people; it's a moderator that doesn't just represent one side."

"Cultural organisations, which have appeared in the Donbas in the recent years, educate young people who could become new leaders of the region. There are a lot of people in Donbas who are creative and loyal to Ukraine. Their voices usually are not loud, but this does not mean that they do not exist," he said.

Serhiy Miroshnychenko, co-founder of the organization "Friends. Free Space," was born in Kostiantynivka. He studied at his local university to work as a mechanic, and started his own business at the beginning of 2014. After the war began and Donbas fell into the conflict, he converted his business into an online shop. In 2016 Serhiy moved to Kyiv in an attempt to expand his business. But the effort did not succeed, so after half a year, he returned to his hometown. And that when Serhiy became interested in initiatives to change the city.

"We met a 13 year-old girl, an activist, who inspired us to create our organization. She proved that many people in Kostiantynivka want changes – not only us," Serhiy said.

"Friends. Free Space" organises cultural events for young people such as festivals, courses, workshops and movie viewings. They also work to change public attitudes towards business and to foster entrepreneurship.

"In 2017, together with activists of Kyiv's Garden City NGO, we decided to revive an abandoned movie theatre that had not operated for 25 years. In the past, our city had 26 movie theaters, but none of them are working now. That's why we decided to create a public space for movie viewings on the big stairs of the old movie theatre; that is how the MovieStairs project started."

"When the war came to our region we lost a lot, but also we gained a lot. Now we have the opportunity to start everything in a new way and support from international organisations," Serhiy said. "In the past, nobody had worked with people in our region from the Western side, but work from the Eastern side was active. It is precisely because of this that the war began."

"When the war came to our region we lost a lot, but also we gained a lot. Now we have the opportunity to start everything in a new way and support from international organisations"

"Using cultural activities, we united people who have an interest in what happens in city life. They are becoming more active and able to work independently for change. People from Kostiantynivka started to organise their own cultural projects. It is a big shift for our city, because in the past most locals were closed-minded and kept to themselves. They have started to believe that better life for the city is possible," Serhiy said. 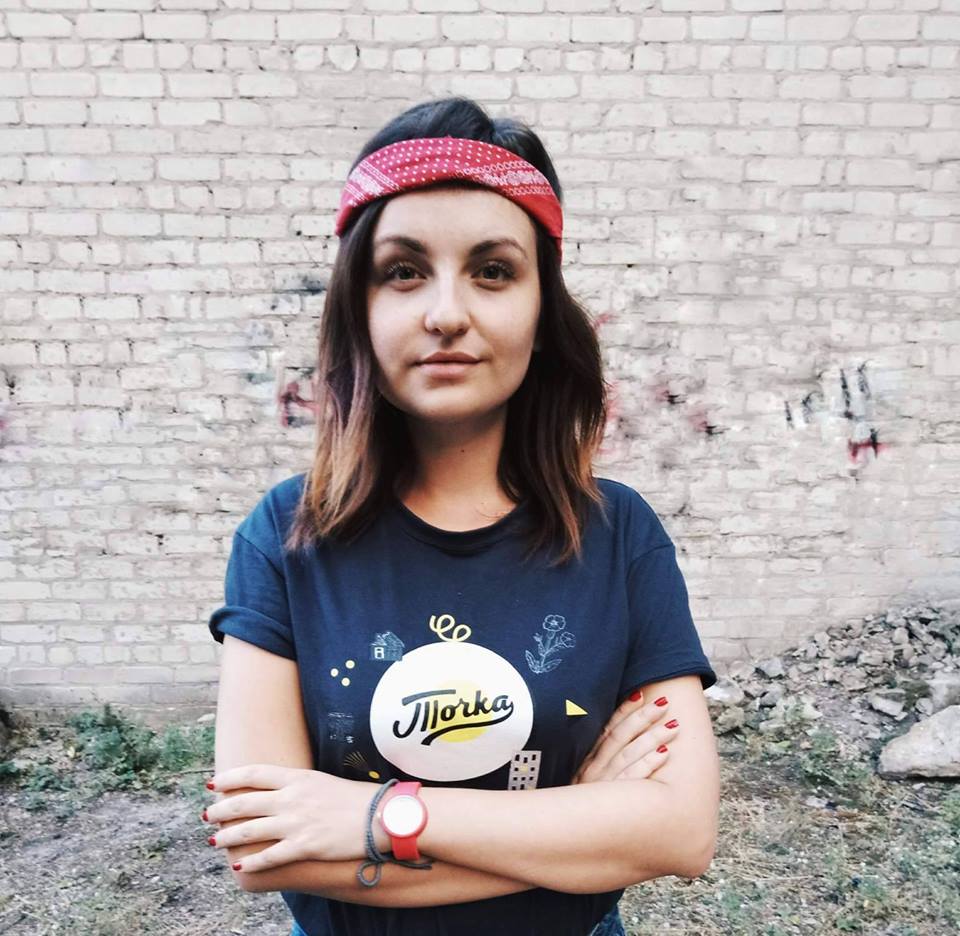 Alina Rudych was born in Pokrovsk. She began to live and study in Donetsk in 2007, but was forced to leave after the start of the war. "I thought for a long time about where to go – Kyiv, Lviv, or Odesa – but my friends and I decided that we don't want to go far, because we believe that we eventually will return to Donetsk, which feels like home for us," she said. So Alina returned to Pokrovsk, only 50 km away from Donetsk, where she works as a journalist for a local website and manages "Platform of Initiatives 'Lampova'."

"Pokrovsk is a miner's city, and lampova is the name for a room where workers get their miner lights. We chose this name for our organization, because we want to be a place where people will receive warmth and protection," Alina said. "We wanted to create a place where young people have interesting ways to spend their free time – the only places to go in Pokrovsk were a pizzeria or a hookah bar. We suggest to Pokrovsk residents events and initiatives, which are not formal and not imposed from above. During the past two years, our organization has increased the number of activists and events in our city."

"We suggest to Pokrovsk residents events and initiatives, which are not formal and not imposed from above".

In 2017, organization members worked with activists of Kyiv's Garage Gang NGO to build an open public space reflecting the industrial past of the city, made from bricks and metal arches. Right now it is used for exhibitions and lectures of local university. Lampova also has plans to organise movie showings there.

"Some people perceive Donbas as a region of criminals and lowlifes," Alina said. "We invite people from other regions to our events and send volunteers from Pokrovsk to bigger Ukrainian cities. We believe this could help to overcome negative stereotypes about the region."

Some Ukrainians see Donbas as an industrial wasteland with high crime, environmental problems, low cultural development and a critical attitude towards the Ukrainian state. War and the general crisis in the region has strengthened this stereotype.

But the rise of volunteer movements, along with attention from both the Ukrainian government and international donors, has opened the door for economic and cultural development in Donbas. And activists like Denys, Serhiy, and Alina are proving that these efforts have a bright future. They could create a new positive image of the Donbas.

Western Europe’s culture of anti-violence continues to exert a magnetic pull on Ukrainian society. But will that be enough to resist Russia’s twenty-first century...
VIDEO
March 21, 2018

Residents of a building in Ukrainian town Sumy had an opportunity to compare services provided by the state-owned utility company and the condominium. Find out which...