Deficit of Jabs: Ukraine’s Struggle to Vaccinate its Population

May 5, 2021
Vaccination in Ukraine started later than in most European countries. Nevertheless, the government aims to vaccinate most of the population by the end of 2021. 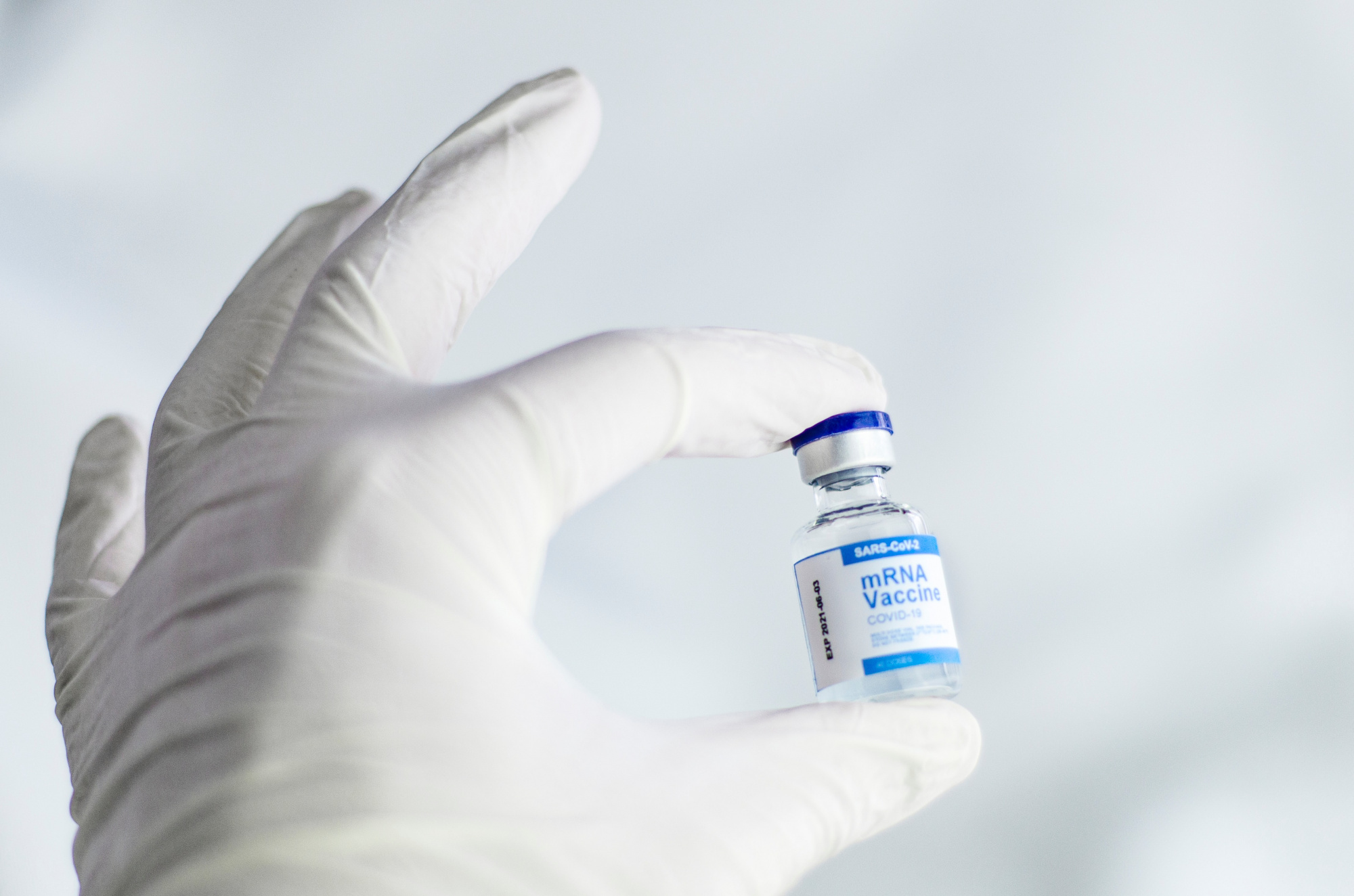 Ukraine started its vaccination on February 25. However, as of May 4, only 759 thousand jabs have been administered which means that 1.74% of Ukrainians have received their first dose of vaccine. Only 303 people have been fully vaccinated. 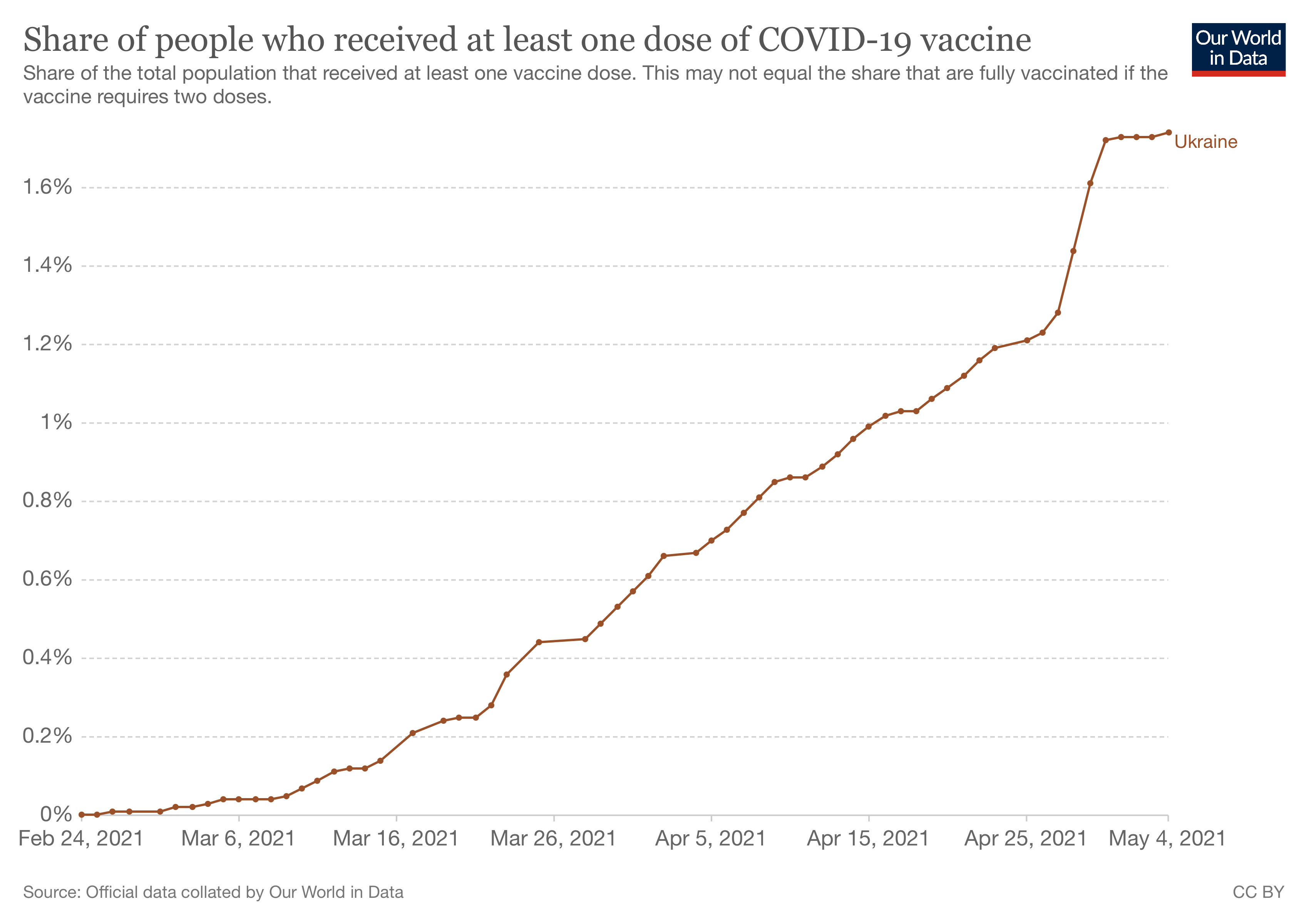 UkraineWorld studied why the vaccination has been so slow and whether there are reasons to expect its pace to increase.

On April 22, Ukraine’s Cabinet of Ministers published the National Coronavirus Vaccination Plan which foresees that Ukraine will receive 21.9 million vaccine doses by the end of 2021. According to the document, 13.9 million will be purchased directly from the state budget, while 8 million will be received within the COVAX initiative. In particular, 8.94 million vaccines from Oxford/AstraZeneca, 10 million from Novavax, 1.91 million from Sinovac Biotech and 1.07 Pfizer/BioNTech vaccines have been put on paper as planned for use by the end of 2021.

At the same time, the plan sets an ambitious vaccination pace: 47.8 million jabs have to be administered by the end of the year for Ukraine’s population to reach herd immunity. Such a goal means that more than 5 million vaccines have to be injected each month starting from May.

This goal is hardly reachable with the current pace of 10 thousand vaccinations per day on average. However, Ukraine’s chief State Sanitary Doctor of Ukraine Viktor Liashko announced on April 20 that it is possible to administer at least 90-100 thousand vaccines per day, but such pace was not possible earlier due to the lack of vaccines. Liashko promised that the pilot programme of increased daily vaccination would already start in April.

Iurii Ganychenko, head of the Health Economics Center at Kyiv School of Economics, said in a commentary for UkraineWorld that the new vaccination plan is more conceptual than practical: it sets an ambitious and necessary goal, but its weak point is vaccine supply. He also argued that it is important to closely watch the pilot programme of increased daily vaccination announced by Viktor Liashko. “To implement the plan, we would need more than 200 thousand daily vaccinations. If our healthcare system can handle 90-100 thousand vaccines per day right now, this would be the first step towards this goal,” Ganychenko said. If 100 thousand jabs per day turn out not to be possible, the government would have to increase the capacity or effectiveness of the healthcare infrastructure. Ukraine’s National Security and Defence Council data from May 4 shows that this goal was not reached.

Volodymyr Kurtipa, senior lecturer at the School of Public Health of the National University of Kyiv-Mohyla Academy, told UkraineWorld that the main reason the vaccination has been slow is the lack of vaccines. According to him, the new vaccination plan shows the vaccine supply schedule for the first time but offers no solution for the supply problem. “The plan included Covishield and Novavax jabs which are being produced in India. As we know, India banned the export of vaccines. Therefore, their supply to Ukraine might be delayed,” Kurtipa said.

He also argued that the new plan does not define progress indicators, especially on the regional level. “Local governments do not feel responsible for the pace of vaccination in their regions, and the new plan puts no responsibility on local officials as well,” Kurtipa noted.

Aside from the lack of vaccines, another factor contributing to the slow vaccination pace is vaccine hesitancy.

According to the survey conducted in March 2021 by the research agency Info Sapiens and presented by UNICEF, 63% of respondents would like to be vaccinated if it was possible to do so for free. In particular, 32% said they would accept any vaccine out there, and 31% would only do so only with certain vaccines. Meanwhile, 34% of respondents said they would refuse to vaccinate, and 3% were undecided.

Another survey conducted by Sociological Group «Rating» in March 2021 shows less hopeful figures. According to the study, 47% would like to be vaccinated for free, and only 38% would do that on a paid basis. Meanwhile, 49% of respondents said they were not ready to accept a vaccine.

Social networks reflect such vaccine scepticism. We have taken a look at Ukrainian public groups on Facebook via CrowdTangle, a public insights tool owned and operated by Facebook.

More than 13 thousand vaccine-related posts were published in Ukrainian public groups since May 5, 2020. The most popular posts were jokes about vaccines being the most helpful to those who sell them. One of the popular posts also shares disinformation that the Covishield vaccine is a cheap “generic” produced in India for the third world countries which has nothing to do with “real” Oxford/AstraZeneca vaccine.

Another factor which contributed to the rise of vaccine hesitancy is political rivalry. Opponents of the current government have been harshly criticizing the vaccination policy of the government. For instance, the openly pro-Russian Opposition Platform — For Life party led by Viktor Medvedchuk has been spreading disinformation about Covishield to promote Russian COVID-19 vaccine Sputnik V. At the same time, Petro Poroshenko, Ukraine’s former President and the leader of the pro-Western European Solidarity party, also stated that the government had brought “shitty” vaccines. While the politicians had different reasons to criticise the government’s vaccination policy, the effect of their statements has been equally damaging.

Vaccination against the clock

It is yet to see whether Ukraine’s government would be able to overcome the supply bottleneck. The new vaccination plan lays out the government's hope to secure at least 22 million vaccines by the end of the year, but this amount of jabs won’t be enough to reach herd immunity in 2021. Vaccinating its partly unwilling population against the clock, the Ukrainian government hopes there would be no delays in already contracted vaccine supply and strike new deals as soon as possible. Ukraine's President Volodymyr Zelensky recently announced an agreement to provide 10 million Pfizer/BioNTech vaccines. Although this agreement has not been reflected in the National Coronavirus Vaccination Plan yet, it might be the first sign that more vaccines are on the way.

Although Ukraine is not the best-adapted country when it comes to accommodating disability, some Ukrainian innovations aim to better engage disabled people into...
VIDEO
February 10, 2021