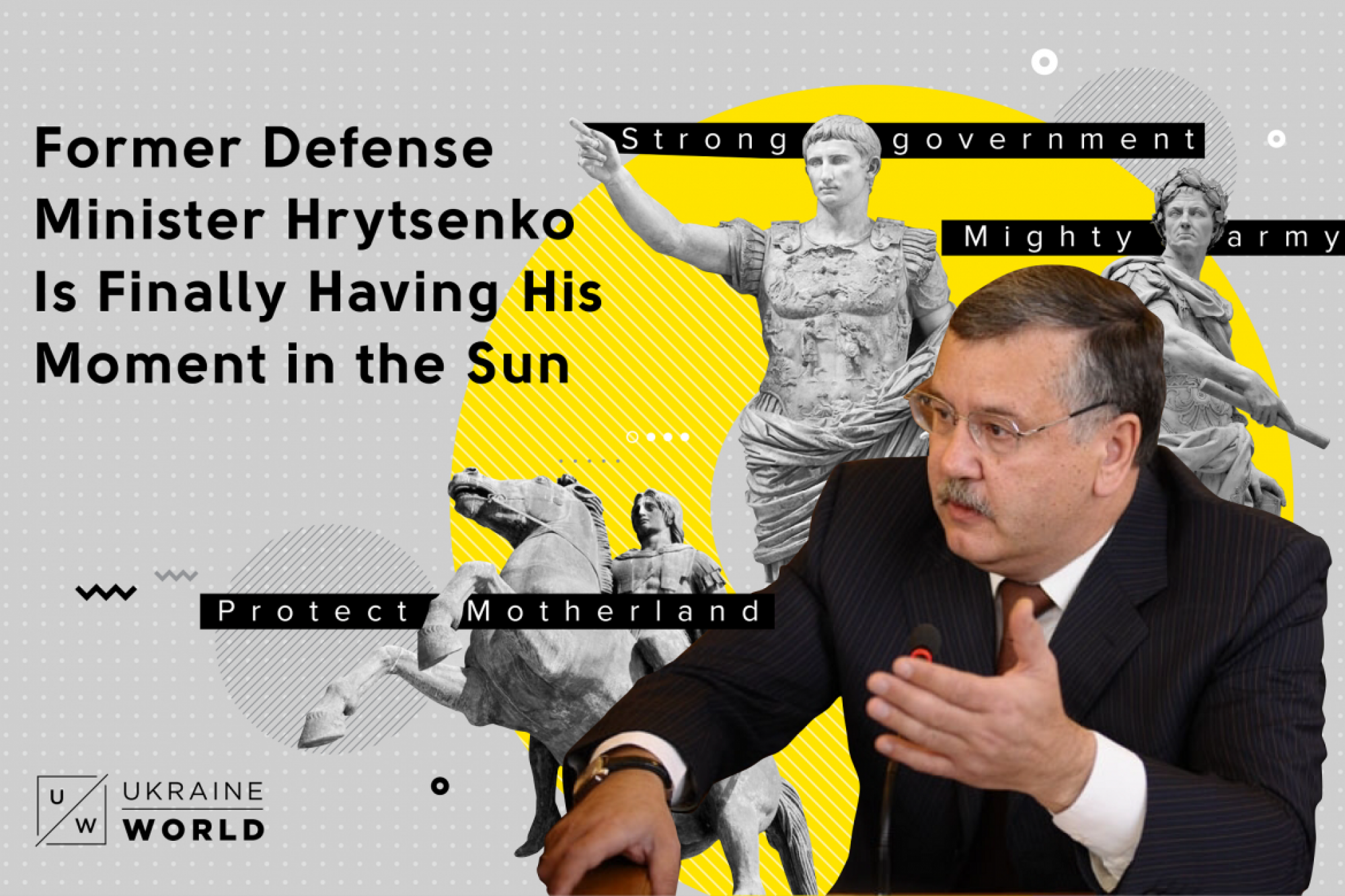 The latest poll shows that 12.7 percent of Ukrainians who have made up their minds would vote for Hrytsenko in the first round of the 2019 presidential election. This is progress compared to his previous results. The 2019 race will be the third attempt in Hrytsenko's political career to become president; he scored 1.2 percent of the vote in 2010 and 5.5 percent in 2014. However, at least 29 percent of Ukrainians are still undecided, so take these numbers with a large grain of salt.

Hrtysenko's political party, Civic Position, is also enjoying the same success. It polls second with 11.5 percent support, which is a massive improvement from its performance in the 2014 parliamentary elections, when it garnered 3.1 percent.

How did Hrytsenko and his party manage to climb the polls in a few short years?

Hrytsenko has one feature which sets him apart from other major Ukrainian politicians. He is a retired Ukrainian Armed Forces colonel who served for twenty-five years—a fact that he likes to cite.

Hrytsenko has one feature which sets him apart from other major Ukrainian politicians. He is a retired Ukrainian Armed Forces colonel who served for twenty-five years—a fact that he likes to cite. For instance, he presents himself as an expert while talking about Russian aggression in Crimea and the Donbas and often speaks about an "officer's honor."

Hrytsenko does have a rich military background. Apart from graduating from Kyiv Higher Military Aviation Engineering School, he also studied in the United States. He graduated from the US Defense Language Institute in 1993 and from the resident program of the US Air War College in 1994.

Hrytsenko also chaired the Verkhovna Rada's Defense Committee from 2007 to 2012.

According to his 2016 declaration, he is among the poorest presidential candidates. His annual income of 150,000 hryvnias (5,000 euros), four Kyiv apartments, a 2013 Volvo, and 3.2 million hryvnias (106,000 euros) in bank accounts is quite respectable for a regular Ukrainian, but rather small compared to his competitors.

Hrytsenko uses this fact to denounce oligarchs and Ukrainian President Petro Poroshenko in particular. He has already claimed that his campaign won't be financed by "oligarch money," while his income and spending will be transparent and open to the public.

However, there is one similarity between Hrytsenko and the Ukrainian oligarchs: they all have access to major media. Hrytsenko's wife is Yulia Mostova—one of the most influential Ukrainian journalists and editor-in-chief of the Dzerkalo Tyzhnia weekly newspaper. Nevertheless, Hrytsenko has not abused this connection, and _Dzerkalo Tyzhnia _is regarded as one of the best and most professional outlets in Ukraine.

"I rarely publish my articles in _Dzerkalo Tyzhnia _due to ethical reasons and internal censorship," Hrytsenko said in an interview on the 112 Ukraine TV channel. Instead, he is an active contributor to the Ukrainska Pravda website.

Hrytsenko is well-known for his bold statements.

Hrytsenko is well-known for his bold statements. For instance, he has called for"severe punishment" for Poroshenko for "stealing from the country" which includes "a life sentence with confiscation of property and no right to amnesty." In this same speech, he also called for the death sentence to be brought back to Ukraine.

He supports strong leadership. In a recent interview, Hrytsenko stated that "Ukrainians should not fear authoritarianism. It is not a dictatorship which suppresses human dignity and human rights. The word 'authoritarianism' comes from 'authority.'" He also argued that "enlightened authoritarianism takes a country to a new, higher level of economic development and democracy." According to him, the president should form the government and appoint all the ministers single-handedly. He sees "an executive vertical [power structure] with many heads" as "a huge problem for the country."

Besides denouncing oligarchs, Hrytsenko's favorite topic is the war against Ukraine and the condition of the Ukrainian Armed Forces.

Besides denouncing oligarchs, Hrytsenko's favorite topic is the war against Ukraine and the condition of the Ukrainian Armed Forces. He has often said that he actively continues to look for a way to achieve peace.

According to a 2018 VoxCheck study, only 40 percent of Hrytsenko's statements are true. This figure is much higher than Yulia Tymoshenko's (17 percent), but less than Poroshenko's (54 percent) or Prime Minister Groysman's (88 percent).

Hrytsenko positions himself as a leader to unite reform-minded political parties. There are negotiations between Civic Position, Samopomich (Self-Help), Democratic Alliance, Syla Liudey (Power of the People), and others.

At the moment, only one party has declared its support for Civic Position and Hrytsenko. On May 10, Yehor Firsov, a Ukrainian MP and leader of the Alternative political party, officially allied with Hrytsenko. In his blog on Ukrainska Pravda, he notes that Hrytsenko is the most decent among all those politicians who are running for the presidency and is the best candidate for the new faces to unite around.

Will Hrytsenko become a real alternative to current politicians like Poroshenko or Tymoshenko? This remains to be seen.

Vitalii Rybak
An analyst at Internews Ukraine and UkraineWorld.
Next article

Donbas is an integral part of a shared Ukrainian and European heritage. In our new video produced together with the Ukrainian Institute, we explain why.
PODCAST
March 3, 2021