February 22, 2020
The past several years have brought a boom in Kyiv’s restaurant industry. This industry in Ukraine’s capital has been rapidly flourishing with numerous cafés, restaurants, bars emerging in Kyiv downtown and other parts of the city. 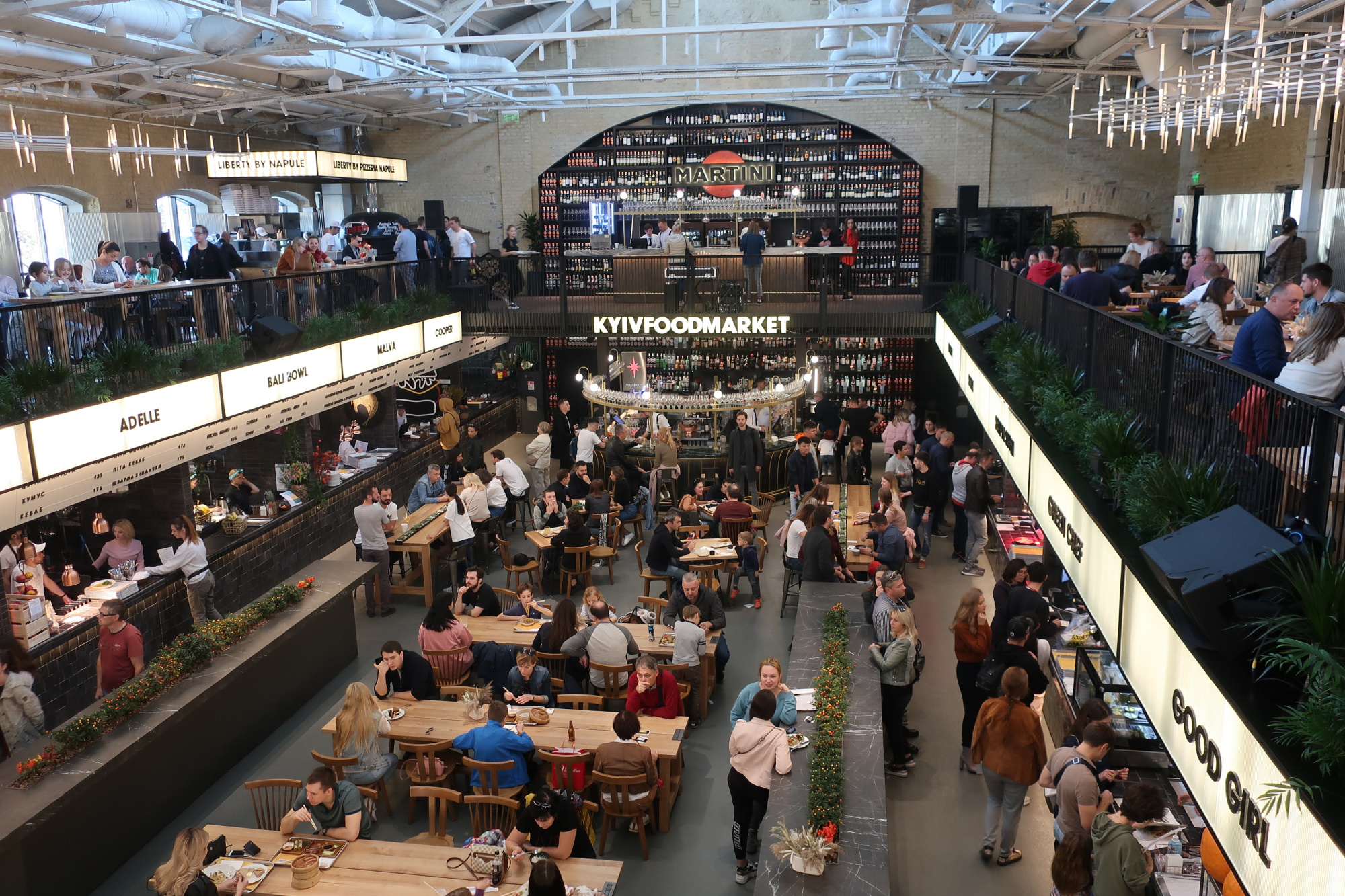 In 2019, Ukraine ranked third among European countries in terms of number of cafés opened. The Independent, a UK digital outlet, suggested visiting Kyiv as one of the most important destinations for foodies. However, while there has been overall growth, some food outlets have closed. Here are key trends that are driving today's Kyiv food market.

Kanapa, a restaurant located downtown on Andriyivskiy Descent, is one of the must-visit destinations for gastronomes suggested by The Independent. Its founder, Dmytro Borisov, is the owner of 55 restaurants in the Ukrainian capital and other cities, including Warsaw. He has pioneered the development of the so-called "one-euro-bar" format. In April 2018, he started his first place with this format, Biliy Nalyv, with a single, fixed price around one euro for all menu items, thus becoming a major driver for the development of a whole segment in Ukraine's restaurant business. 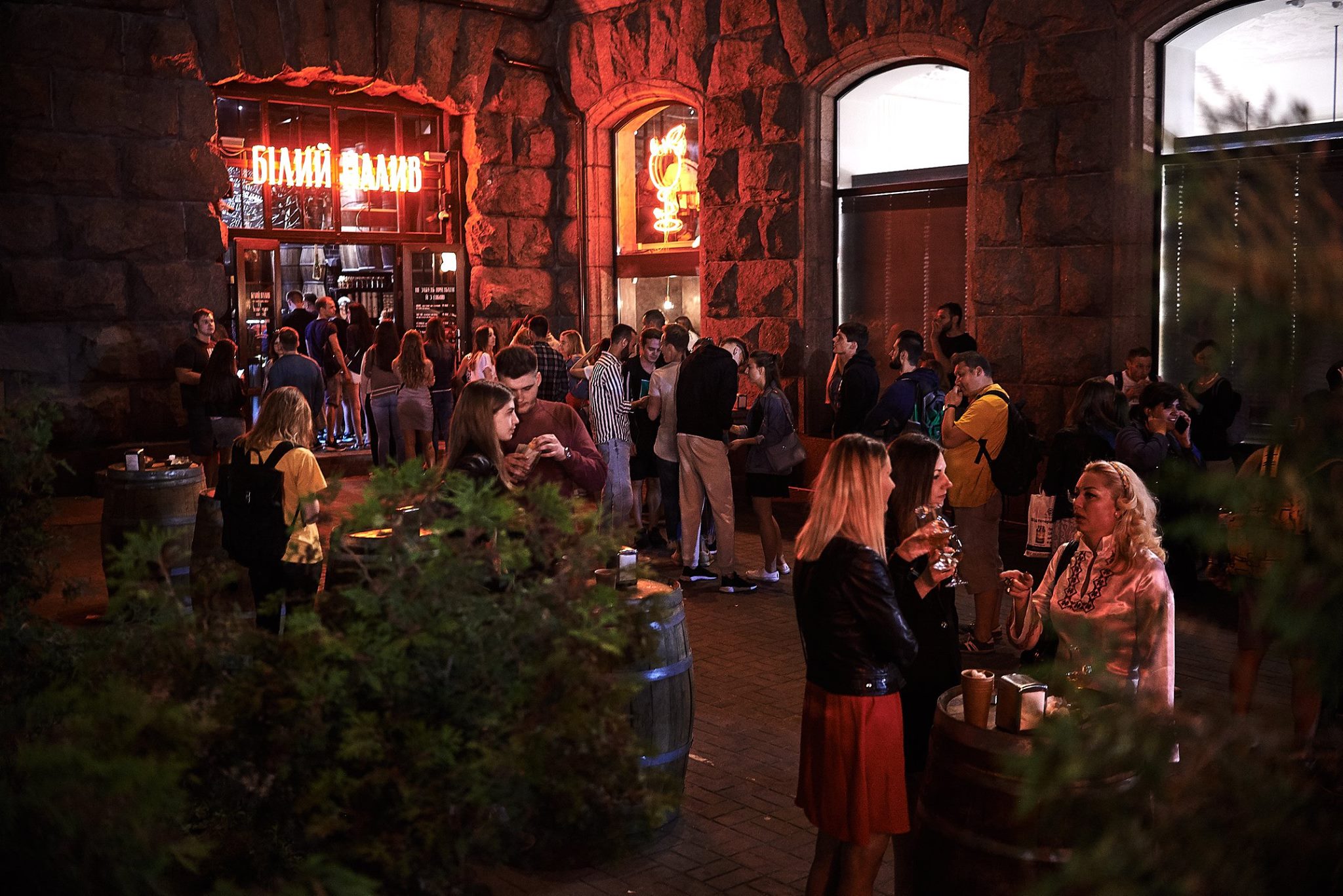 According to Borisov, there is a persistent belief among Ukrainians that it is quite expensive to visit restaurants and to eat outdoors. However, his network of "one-euro-bar" food outlets, including Mushlya Bar, Dogz&Burgerz, and BPSh, has given many Ukrainians, especially in the younger generation, the ability to go out to eat.

"Eighty percent of the people coming to my restaurants had never visited them before, and we've created a new niche in the Ukrainian market," Borisov argues. His motto, as he puts it, is to "develop the country's gastronomic culture."

Borisov is not the only one who is developing Ukraine's gastronomic culture through the "one-euro-bar" format. Naprosecco, Flowers Mafia, Rozkovbas and other restaurants are further examples of this wave in Kyiv. In addition to quick service and minimal waitstaff, most of these locations offer a menu limited to a few items, like oysters, hot dogs, burgers, pizza, french fries, coffee, and cider. "The smaller the range of dishes, the faster and easier the process of food preparation is," explained Volodymyr Grigori, co-owner of Naprosecco, a place specializing in burgers, fresh seafood, and prosecco. 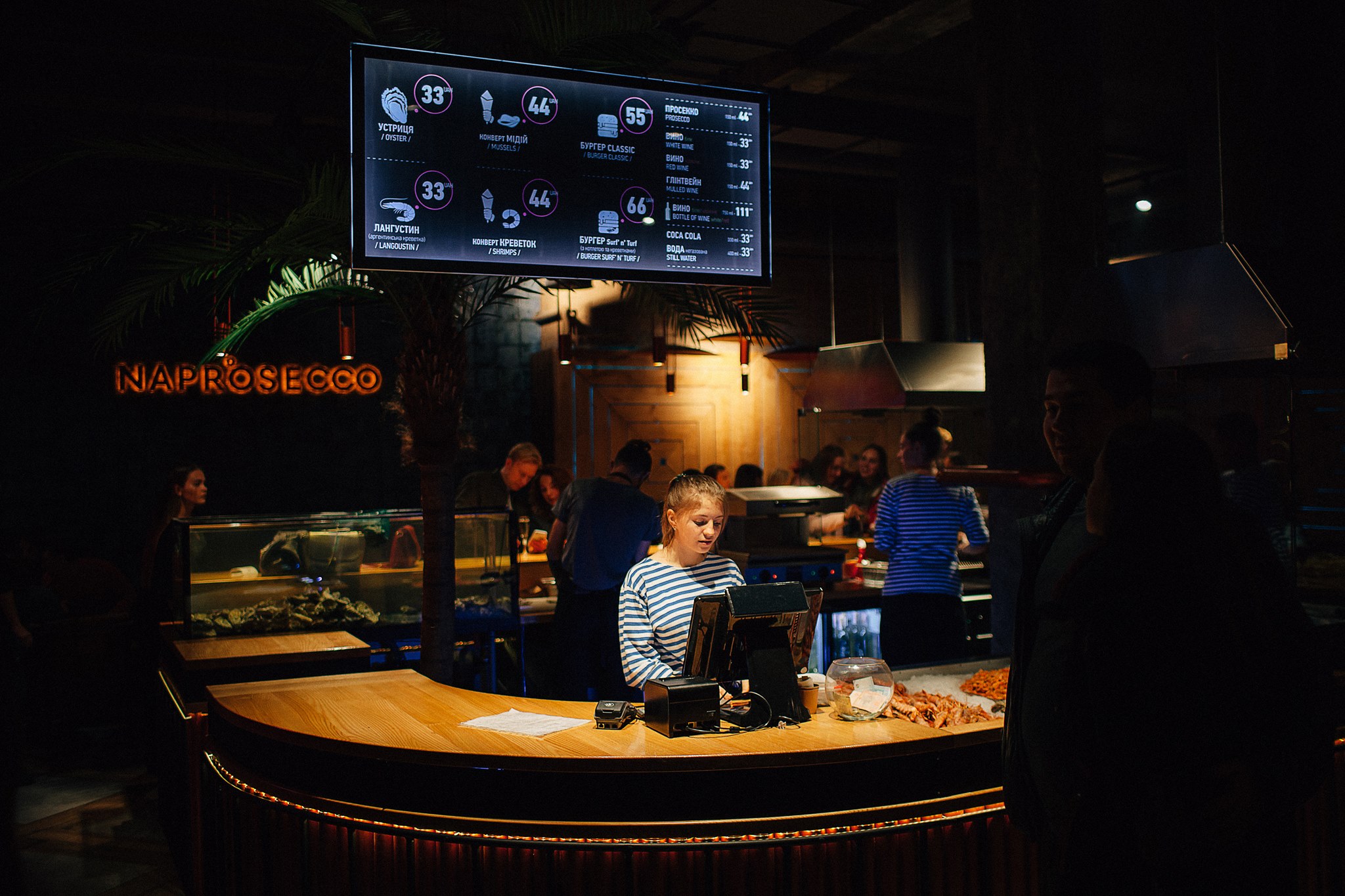 While this fixed price format is quite common in the Western restaurant industry, it is a relatively new trend for Ukraine. According to Olha Nasonova, the director of Restaurant Consulting, the emergence of this type of food outlet was just a matter of time. The fixed price concept has become very timely in meeting the rising demands of the customers who had been fed up with the same old business lunches and short-lived special offers.

"I think that fixed-price food outlets will be a  long-term phenomenon in the Ukrainian market," Nasonova says. Borisov agrees, predicting that the "fast-casual" format will "be the basis for the development of gastronomic culture for the next 10 years."

According to various estimates, between 150 and 200 new restaurants of different formats were opened in Kyiv in 2019. Vitaliy Kyrychenko, co-owner of Pink Freud bar in Kyiv, links the boost of restaurant business with the mass movement of internally displaced persons from Donbas to the capital, as these people see going out to eat as a means to quickly get integrated into their new environment. The rise of tourists coming to Ukraine from abroad as a result of cheap air fares is also driving the high-speed development of these businesses, the restaurateur says.

Nasonova looks at this phenomenon from a slightly different angle. An increase in consumer demand in 2016-2017, especially among young people, the substantial fall in real estate prices, as well as the restaurant industry becoming a hip new thing to be involved in are the factors that have become an impetus for the rise of Kyiv's restaurant market. Mariya Yakush, a co-founder of the Restoranskiye consulting company, agrees with Nasonova. "The restaurant business is very trendy. People think it is easy to run this kind of business, and they treat it as a personal passion project" she says.

However, it often turns out not to be so easy. This approach can be unkind to both newcomers and veteran restaurateurs, and a number of restaurants have closed. Nasonova believes 2019 was the peak year in terms of the growth of Kyiv's restaurant business, which is going to experience a decline in the coming years.

As the market starts facing a lack of space for new food outlets and prices are artificially inflated by newcomers seeking quick profit, new formats start to emerge. Food halls - large sections of department stores, where food and drinks are sold - give restaurateurs the ability to open up new outlets with small investments.

"In fact, a food hall is a very big restaurant with a wide range of dishes," Mike Tsvetaev, an independent restaurant critic, explains. "You do not need to think of what to have for your dinner - sushi or khachapuri. You can get both and even more at a single location. But you just need to be aware that a food hall is a more democratic format aimed at young, smart audiences who are ready to skip table service in favor of waiting on themselves."

Being quite popular in the West, the food hall concept is still new for Ukrainians, especially for Kyiv residents. Alex Cooper, an Odesa-based restaurateur, is one of the people who are eager to bring about this model in Kyiv.

Based on his Odesa experience, in late September 2019, Cooper and his business partner launched Kyiv Food Market, a two-floor, 2000-square-meter food hall which encompasses more than 20 restaurants and bars under one roof. Explaining one of the main differences between his food hall and other dining formats, Cooper emphasises on the ambiance. "When you are at the table in a restaurant, people see it as your intimate space, and very few will come by to strike up an acquaintance. But at our market, people walk around with glasses, share food, and talk with strangers. This creates a really cool atmosphere," he says. Cooper compares this atmosphere to a"big birthday party," saying, moreover, that just few in the West have managed to create such an atmosphere with this format. 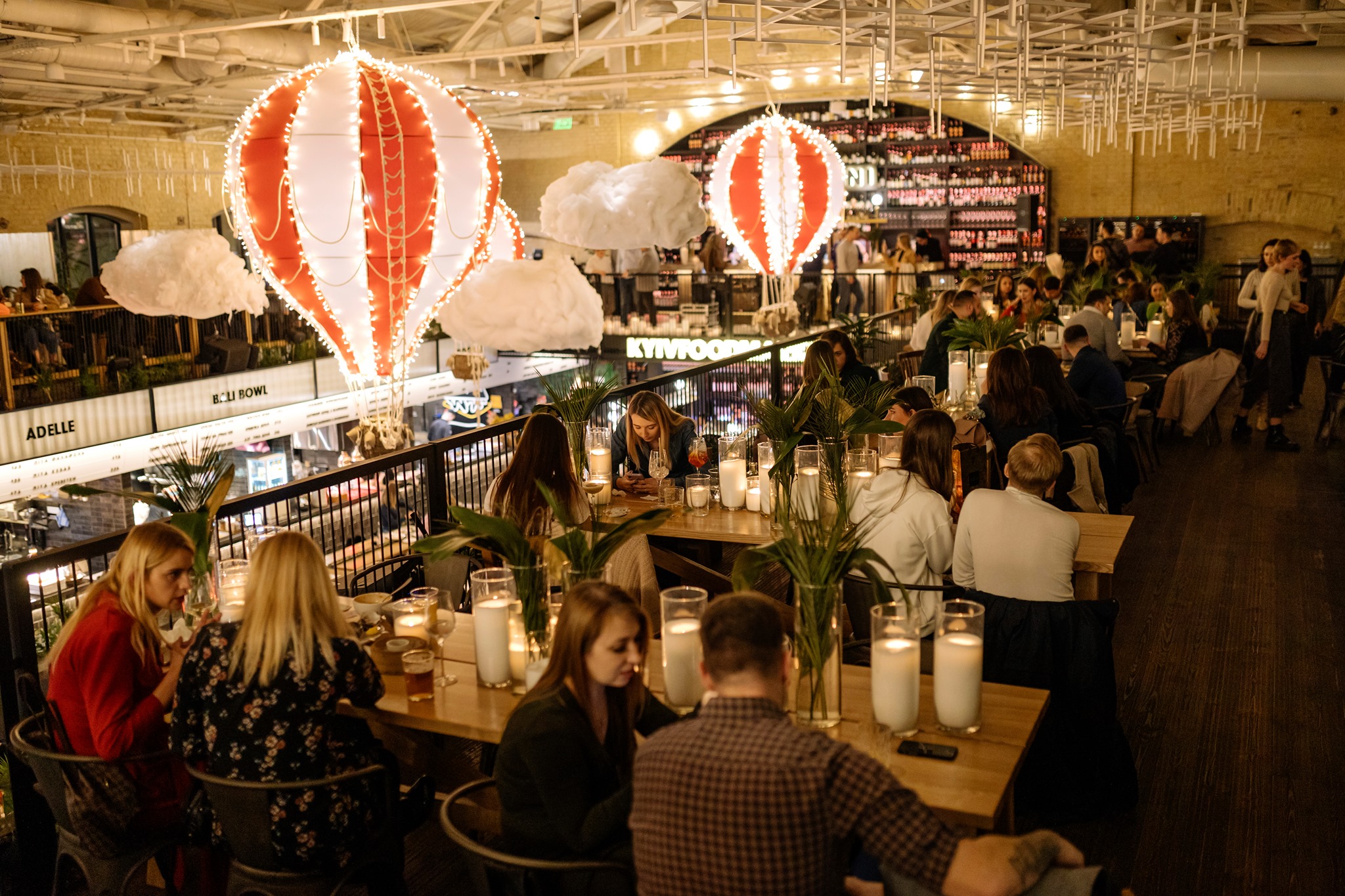 Roman Tuhashev, the creator and co-owner of the Ulichnaya Eda (which translates as "Street Food") and Bukhta food station projects, has revealed plans to open two food halls soon, one of which is set to be the biggest in the city with about 38 restaurants and bars operating in one building. In general, he predicts rapid development for food halls in Kyiv and other large Ukrainian cities in 2020-2021.

Tuhashev is not the only one with plans to expand food hall spaces in Kyiv. Bessarabskiy Market, Kyiv's most famous indoor market located downtown, has been under consideration for a long time to be reconstructed as a food hall. Already this year, there are a number of plans by other actors to open new locations, including one on Kyiv's left bank of the Dnipro River. A big space which unites over 30 bars under one roof is set to become operational in 2020. "There could be 10-15 food halls located in Kyiv, and a number of food halls may take root in such cities as Kharkiv and Dnipro," Tsvetaev says.

Tuhashev believes this expansion of food halls will continue for up to another five years.

With all the ups and downs of restaurant culture, Kyiv today is certainly a different place from five years ago. The emergence of a middle class with its quest for fun and socializing, as well as the rising demands of young people, make Ukraine's capital one of the most dynamic gastronomic cities in the world. This makes it an awesome place to visit!

How much of one’s life can fit into a suitcase? This is the question that around 1.5 million Ukrainian IDPs have dealt with. Thanks to the support of the Black Sea...
PODCAST
June 22, 2020