May 14, 2019
How much of one’s life can fit into a suitcase? This is the question that around 1.5 million Ukrainian IDPs have dealt with. Thanks to the support of the Black Sea Trust for Regional Cooperation (BST), Internews Ukraine has found a creative way to draw people’s attention to this problem. 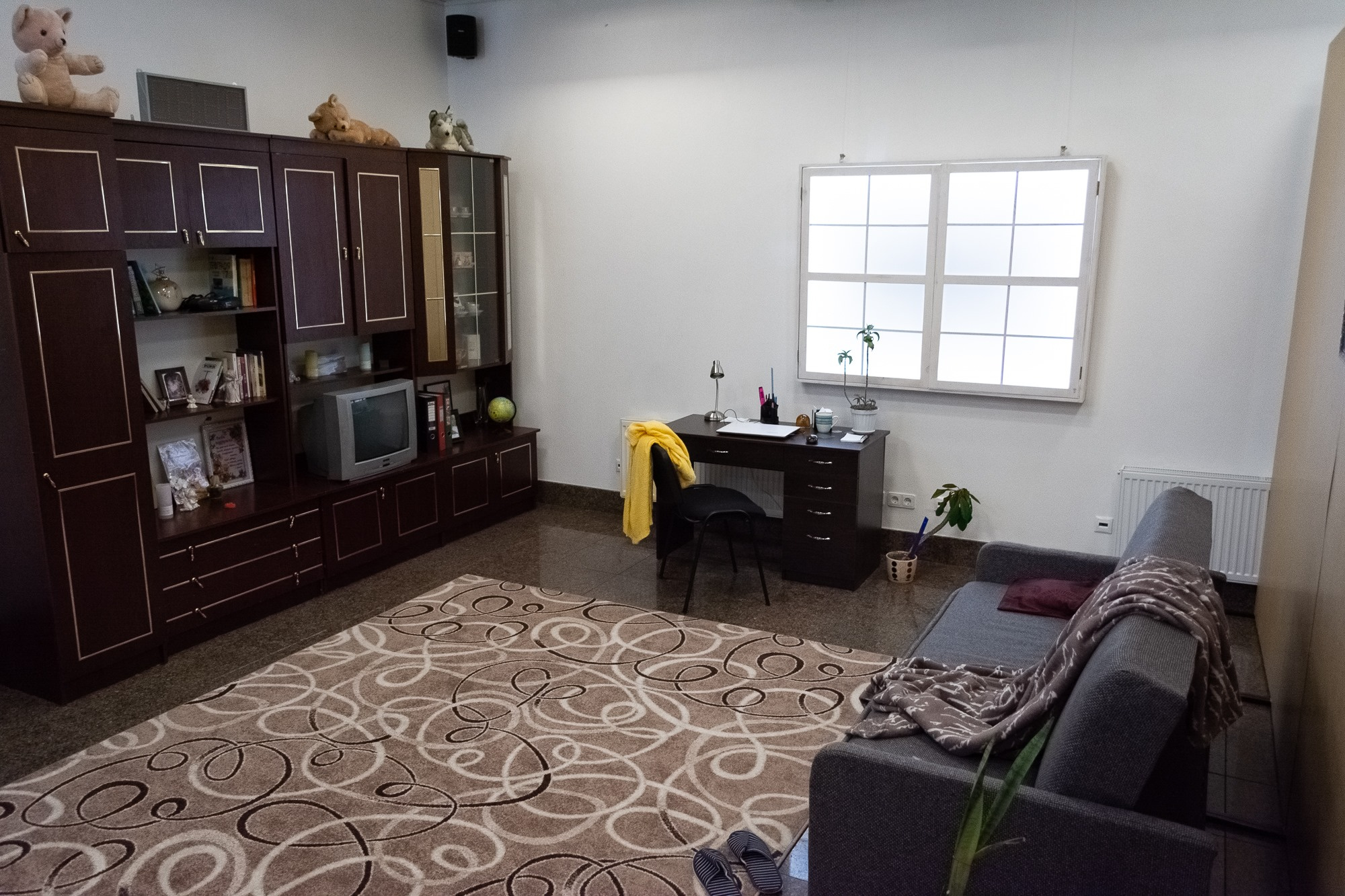 On 10 May, the interactive installation 'Fit Your Life in the Valise' was officially opened in the Kyiv History Museum. As part of social projects by Internews Ukraine and UkraineWorld, its task is to shed more light on Ukraine's social challenges.

Divided into two rooms, the installation gives visitors the chance to step into the shoes of IDPs.

With a list of items from the moderator, a guest enters a room with a wall unit, a TV, a desk with a chair, a sofa and a carpet inside. Everything is reconstructed into a typical Ukrainian flat with everyday things that often have an intangible value for inhabitants. Among clothes, books and photographs, s/he has to quickly find and pack all s/he needs to move into "uncertainty", as some speakers for IDPs described it at the opening presentation. Besides the pressure of a 5-minute countdown timer, an audio track of everyday sounds reinforces the sense of reality. When finished, a person proceeds to the next room to continue the IDP's path via virtual reality glasses. The 360-degree video takes the viewer from the checkpoint to the railway station, from the social welfare centre to a boarding house, and finally to a rented flat, cluttered with unfamiliar furniture and items of someone's everyday life.

All this reflects the initial idea developed by the organizers: to draw people's attention to the problems encountered by IDPs by providing a better understanding of what it is like to flee with your past and present in one suitcase.

'There have been a lot of information projects, but now, it is difficult to just inform, just interpret, or just talk,'  Program Director Andriy Kulakov said at the opening. 'We need to give  emotions, to give an opportunity to feel. We tried to do it in such a way that people who have not lived through war would be able, at least, to feel a little of what those who suddenly had to grab everything and leave to go far away, went through,' he added.

At the opening, the installation stirred up sentiments and bitter memories in some of the speakers who have been working with IDPs, or have become IDPs themselves. The suitcase is 'symbolic' to Olesya Tsybulko, Head of the Expert group of the Directorate of Social Services and Integration of the Ministry of Social Policy. 'On 1st March, when I saw the Russian State Duma had given permission to send troops to Ukraine, my first thought was that the Donbas region would be the first one to meet the enemy. And that I didn't have a suitcase. At night, I found a shop that was still open and bought this suitcase.' In late April she tried 'to fit everything in' the purchase and left Donetsk. In her opinion, despite positive steps the government has taken to solve the problem of IDPs, housing remains the biggest challenge.

Oleksandra Dvoretska, the Executive Director of the CF Vostok-SOS, which has been helping IDPs with new homes since the beginning, underlined that the latter is part of the systemic problem which forces many families to 'go back to the occupied territories today'. Nonetheless, it also demonstrated a unique solidarity of Ukrainian society in its willingness to help those who often did not even taken linen and towels, hoping to come back. 'What unites all those people is that they well remember the date when they left their homes. After 5 years, they know the time of day, the weather and the clothes they were wearing'.

Journalist and Сoordinator of Programs at Internews Ukraine Oksana Viter and the Head of the Ukrainian Department of Belsat Ilya Suzdalev, confirmed this through the sharing of their memories. Their two different stories on fleeing Donetsk are similar in the precise descriptions of details and mood. While Oksana left 'in a pink dress, with a pink suitcase', Ilya recalled he was sure he would be back by Independence Day. Neither of them have been back yet.

The Coordinator of the Donbas SOS hotline, Violeta Artemchuk,says they keep receiving 80-100 calls each day. 'Each call is an item in the suitcase. Either material, or intangible,' she said, comparing. Given her experience, the hardship lies in the fact that some non-essential things are parts of a person's "identity and soul", and because of this, are vital for his or her adaptation to  a new life. Artemchuk remembered a call from a family in Donetsk Region: 'A man asked me 'Can I take 40 boxes of beatles [from the occupied territory] with me?' He said he was a collector, and that was his whole life. He had been collecting  them for 30 years. You could not take 40 boxes of beetles. They moved without them'.

While many found it impossible to move parts of their lives, Alevtina Kakhidze faced an even more daunting challenge. Her mother, whose life the artist described in a series of stories, was one of 300,000 so-called 'pension tourists', a fake IDP. Being pro-Ukrainian, she had not left the Ukrainian government-controlled side, but crossed the checkpoints only to get her pension. 'During these 5 years, I was in the situation of being 'a bad daughter', Kakhidze confessed. 'Very often I would hear a question 'why don't you bring your mother here?' I was thinking about it for two months. The answer was: she is not a piece of furniture.' The artist emphasized that there are all kinds of people in occupied Donbas: pro-Russian, pro-Ukrainian, and apolitical, and they have their own reasons to stay.

Crimean Tatars were the first ones to experience what it is like to flee in fear.

Alim Aliev, who is the Program Director of the state-owned enterprise Crimean House, recalled his grandparents who, 75 years earlier, had packed in 15 minutes during the Soviet deportation. Today, his natives are leaving again because of repressions, forced disappearances, and murders. Aliev stressed that they usually do not like to be called IDPs, so they use the term 'new neighbours' to break any stigma. 'When we talk about help and dialogue, we have to remember that they are those [IDPs] who bring our victory de-occupation, both of the East, and of Crimea, closer' he explained.

This is the leitmotif of the 'Fit Your Life into the Valise' installation. Since its opening, it has already received dozens of examples of emotional feedback. 'It was extremely important to see ordinary people, who were just walking around here, to come in and leave with tears in their eyes,' Iryna Loyuk, an expert in Program of Advisor in questions of IDPs and the moderator of the installation, noted. 'This project generates empathy. And this is where the understanding comes from, capable of uniting those, who live in the territories under Ukrainian control, who have moved, and who have stayed there [on the occupied side],' she said, concluding.

The project has been implemented with the help of charity funds and public organizations such as Vostok SOS, Donbas SOS, Crimea SOS, Crimean House and human rights project Radnyk (Advisor-ed.) on IDPs.

This article was prepared with financial support from International Renaissance Foundation

HBO mini-series Chernobyl accurately replicates Soviet life of 1986. While many locations shown on the series are real, they do not always look the same. Our journalist...
Ukraine
April 8, 2019

Ukrainians voted for a new President on 31 March. Ahead of the second round on 21 April, we analyse the programs of the top-5 candidates that people supported to...