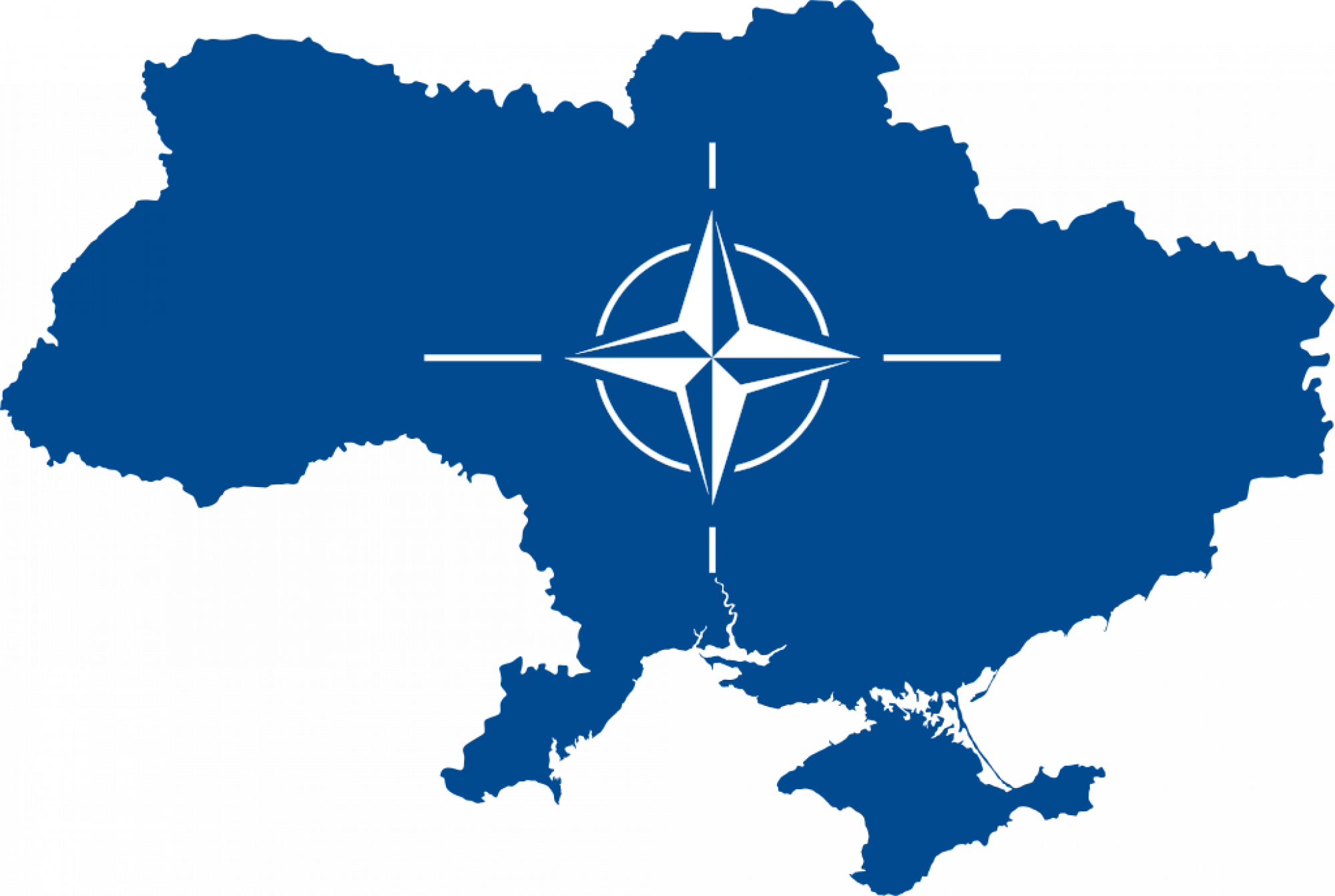 After the Second World War, NATO became the building bloc for the security of Western Europe. Stability in the region empowered political, economic and social development. After the collapse of the Soviet Union, NATO provided security and stability for countries of Central and Eastern Europe, leaving Ukraine behind. As an outsider, this made Ukraine vulnerable in terms of Russian appetites and recent aggression left Ukraine no other choice than to look for strong security allies like NATO.

Ukrainian aspirations for membership within the Alliance are stronger than ever.

At the same time, NATO, celebrating its 70th birthday, being overflooded with new challenges, is not in a hurry to take Ukraine on board. For Ukraine, which secured its EU and NATO aspirations in its Constitution, making this vector hardly reversible, it is essential to understand whether the strong alliance who we're greatly aiming to join is a stable partner that is ready to offer more than "deep concerns".

Is NATO-Ukraine-Russia a deadlock or a new chapter for involved stakeholders?

To start with, geographically Ukraine is located between the two ideologically opposing blocs: the Euro-Atlantic and Russia, in particular, the Collective Security Treaty Organization (CSTO). Since independence, Ukraine has set Euro-Atlantic integration as its priority, but while experiencing a lack of strategic integrity it swayed from one bloc to another.

On the other side, the competition is taking place between those two blocs as they value Ukrainian geostrategic significance. Some scholars even claim that Ukraine is a country that can have a significant impact on the balance of powers in the world. Besides, for Russia in order to fulfil its vision of "Russkiy Mir" (Russian World, a concept that suggests that Russia is a separate "civilization" opposed to the West), it is essential to establish pro-Russian attitudes in Ukraine. Moreover, we can compare the actions of these blocs towards Ukraine as 'pushes' and 'pulls'.

Right after the collapse of the Soviet Union , Ukraine faced a tough decision about nuclear weapon disarmament. At that time, Ukraine possessed the world's third-largest nuclear arsenal not to mention tactical weapons that suddenly disappeared in the first month of Ukrainian independence.

Looking back, nuclear disarmament was one of the most controversial decisions made by the Ukrainian authorities: it made the world more secure, but it made Ukraine less secure.

The signing of the Budapest Memorandum on Security Assurances in 1994 left Ukraine with vague promises about preserving Ukrainian security and territorial integrity, so when Russia illegally annexed Crimea, Ukraine faced the world of "real politics" where state interest is above and beyond. The Budapest Memorandum has led to the creation of fundamental security vacuum, which is still the case.

While international relations and geopolitics are complex, multifaceted areas , we assume four potential combinations: Ukraine-NATO; Ukraine-Russia; Ukraine on its own, making the value of both blocs; Ukraine cooperates with another firm partner, like China or the Intermarium concept. The tricky part is that the scenario should be chosen or Ukraine will always find itself in danger.

By contrast, NATO-Ukraine cooperation was fruitful starting from 1991 when Ukraine joined the North Atlantic Cooperation Council, even though the nature of partnership was loose. After the collapse of the Soviet Union, NATO decided to strengthen its ties with the former Soviet bloc by establishing Partnership for Peace Programme (PfP). The main idea is not only about cooperation within the PfP, but also in joining NATO afterwards. 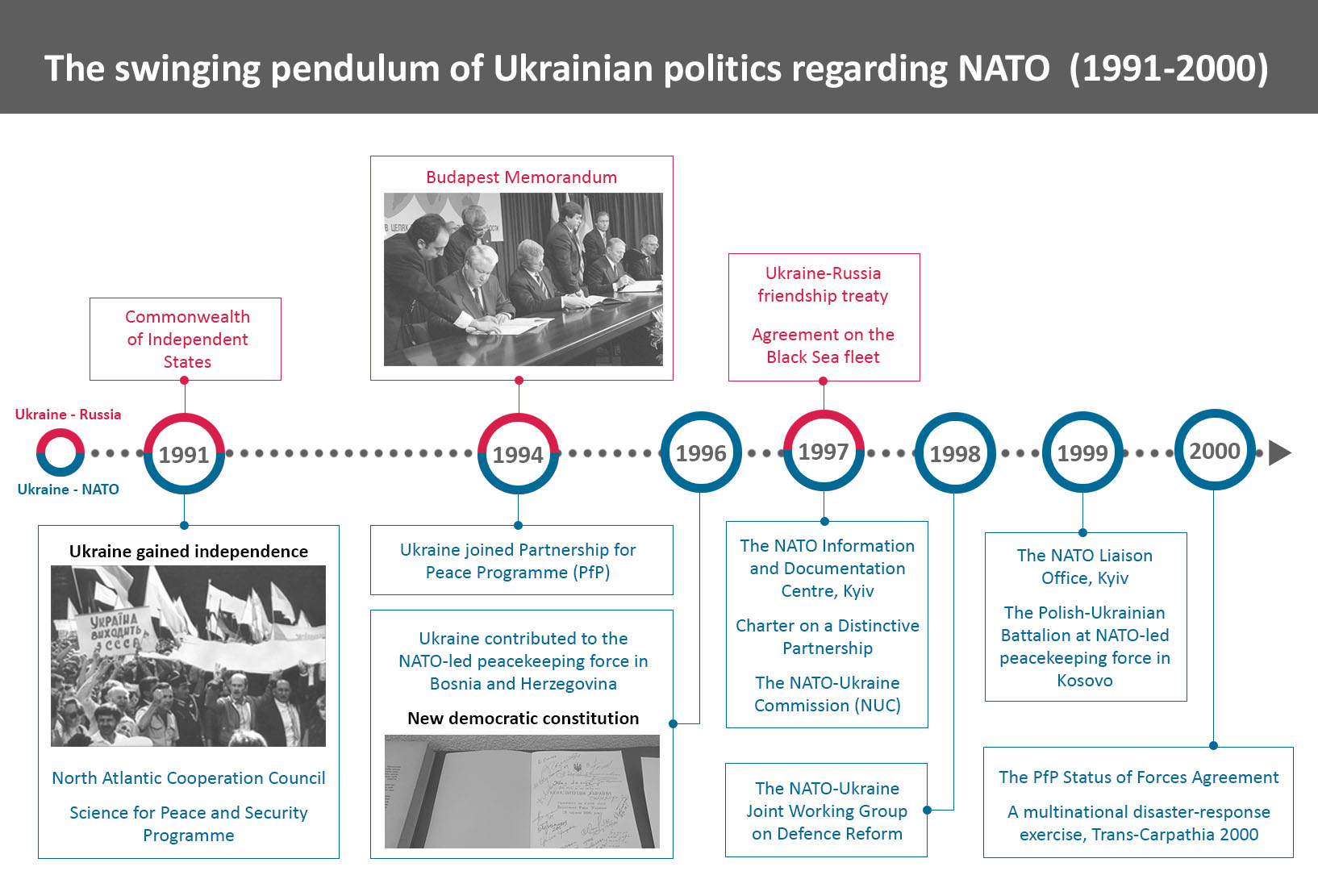 Alongside this, it was only in 2002 that Ukraine first announced its aspirations to join the Alliance, but later on, President Kuchma decided to exclude this statement from the country's military doctrine. Meanwhile, NATO was continuously providing financial and expert support for Ukraine in order to meet the entry standards. The Alliance standards are high , but achievable, for instance, the most favourable time for Ukraine from both sides, Ukrainian and NATO Member States, was right after the Orange Revolution, when Viktor Yushchenko tried to put the issue of NATO membership on the political agenda. 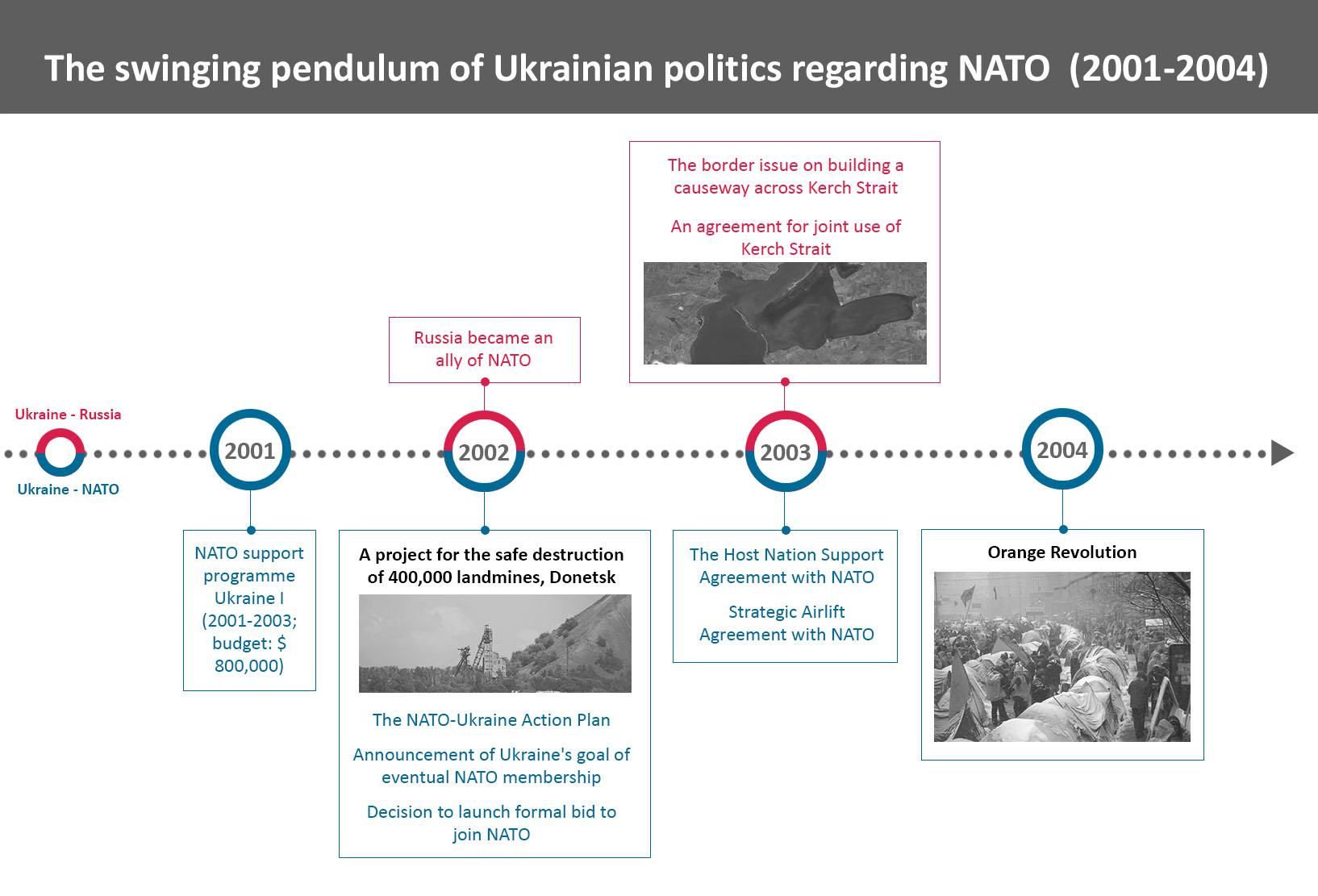 In particular, in 2008 Ukraine and Georgia had significant support among NATO members with regard to joining, but after heated discussions and opposition from France and Germany, neither of these countries was offered the chance to join the NATO Membership Action Plan (MAP). MAP is the only specific and precise way of joining NATO, it is like a guideline with a step-by-step explanation for Ukraine to join NATO. Russia was threatening both, Ukraine and NATO, at that time. In other words, the probability of unrest and potential escalation of worsening relations in the world made it possible to call 2008 the "if case scenario". Because if Ukraine had joined the MAP in 2008 it would have been a member, for now, which would have made annexation of Crimea and the war in the East of Ukraine impossible. The NATO decision not only postponed Ukraine joining, but also emphasized the security vacuum as a window of opportunity for Russia. The lack of NATO membership action plans for Ukraine and Georgia untied Russia's hands for its aggression in Georgia in 2008. and in Ukraine in 2014.

Even though Yushchenko's fatal mistake was to give up on NATO after the 2008 MAP incident and not to officially declare Ukrainian strategic aims. The non-bloc bloc status of Ukraine made room for changing the country's vector. By preserving the non-bloc status pro-Russian President Yanukovych focused on strengthening ties with Russia, which put our national security and territorial integrity at stake. 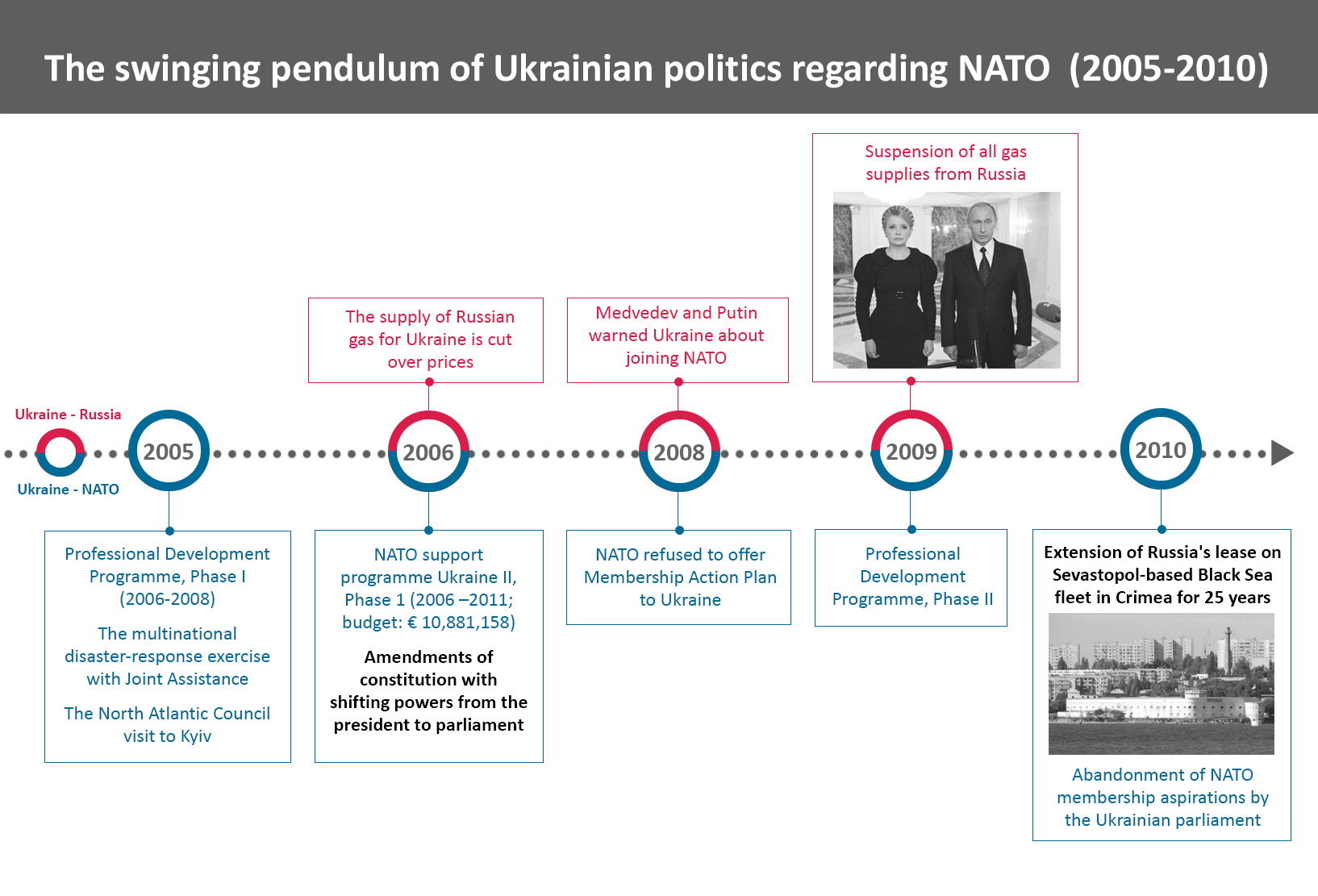 Talking about NATO, it is worth mentioning the current challenges it is facing and their possible impact on Ukrainian membership. The rise of populism and nationalism among Member States has led to fragmentation within the Alliance. It is crucial for NATO to keep everyone on board as it is built on the principle: "all for one and one for all" , especially when talking about great states like the USA. Trump has openly questioned NATO as an institution and the Alliance, and what is more important, even expressed the idea of withdrawing the US from NATO. His main reasons revolve around the so-called burden-sharing debate. Other critical debates concern Article 5 and its vague wording. The Article itself raises the question whether all NATO members are forced to commit themselves when one of them is attacked. Besides, the question of dimensions is also an issue as cyberspace is considered a new battlefield in today's world. Europe, from its perspective, has recently focused on strengthening cooperation in security, which should result in strategic autonomy. The EU has initiated some interesting projects in terms of regional security such as CARD, EDF and PESCO. 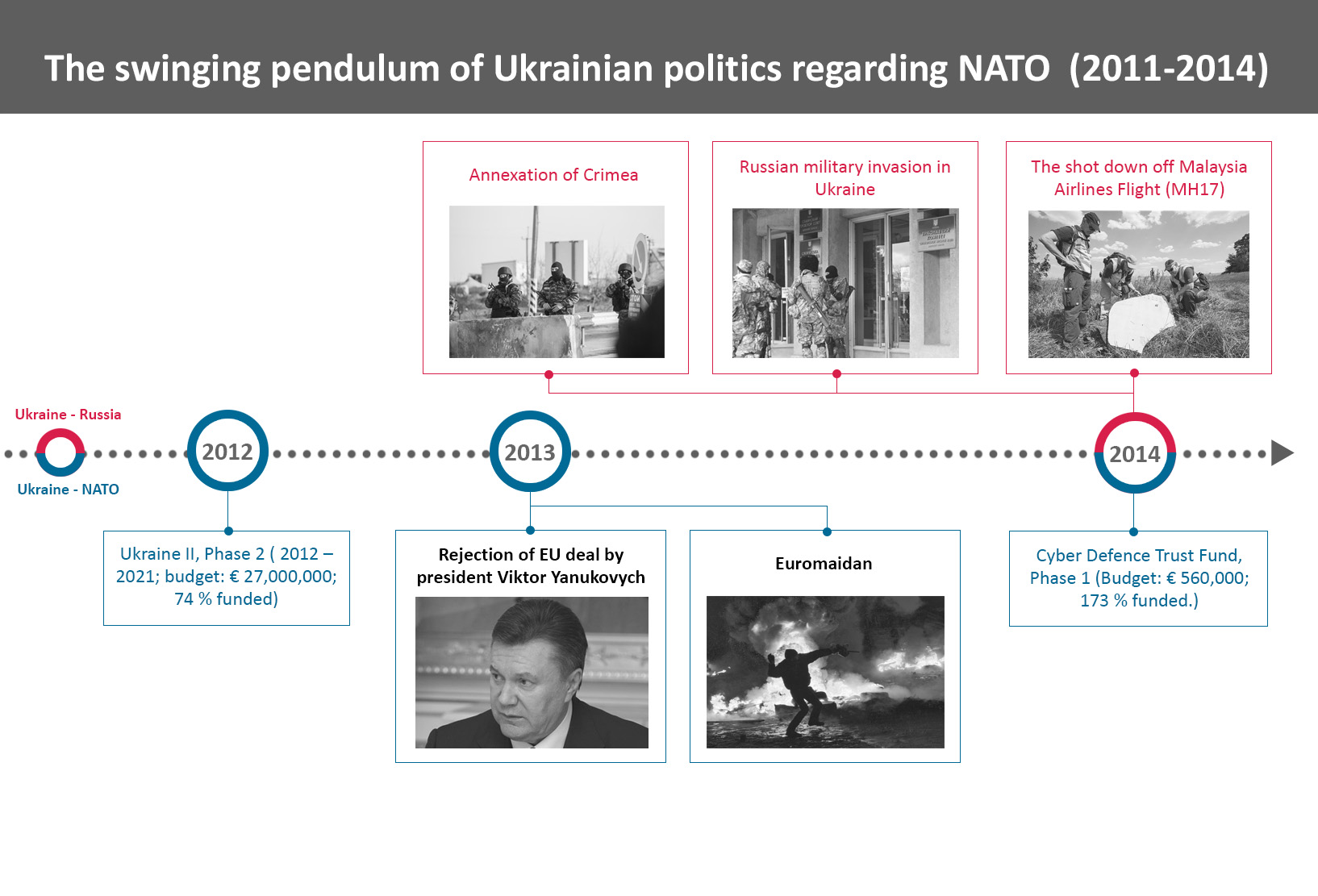 Despite NATO issues and due to the urgent need for military support, Ukraine has declared its strategic course for joining NATO in the country's constitution.

Poroshenko was clear from the very beginning about being a pro-Euro-Atlantic president. It is worth noting that Ukraine's declaration of its Euro-Atlantic vector and strategic goal of joining NATO make three of the options described above almost impossible as the newly-elected president is no longer able to change partners as Viktor Yanukovych did. 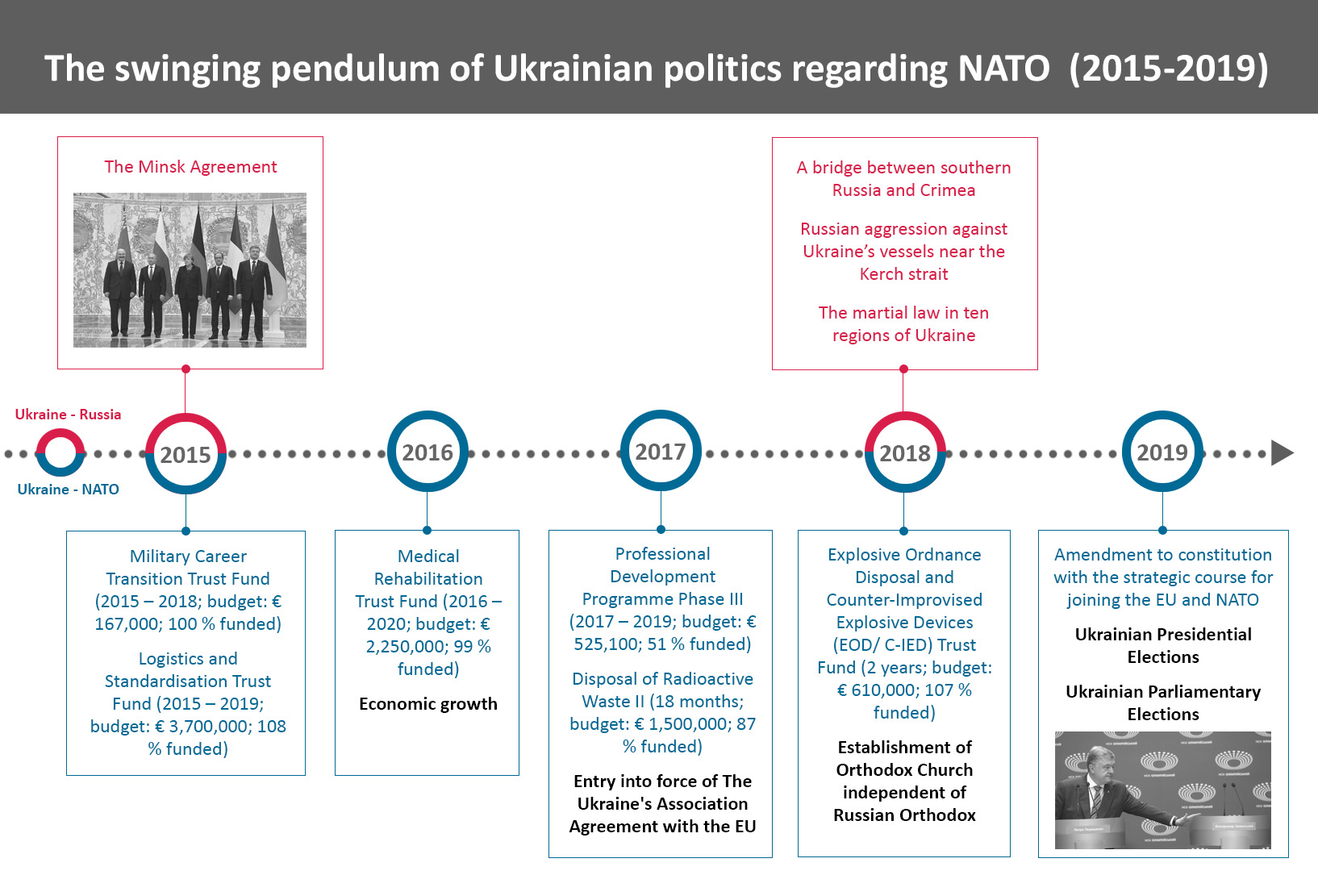 Currently, Ukraine has vague promises made by NATO about joining one day, but it should be clear that the Alliance is not willing to accept Ukraine, not because of its weakness and weak capacity in reaching the set criteria, but because they're seeking a partnership that will lead to peace, not war.

In addition, the number of Ukraine supporters among NATO members has decreased in comparison with 2008. This did not affect future cooperation. For example, from 1991 to 2019 NATO support provided to Ukraine comes to about 45 000 000 euros, and various educational and consultative support was delivered.

To recap, while NATO is facing several different challenges, Ukraine is determined in its aspirations for Euro-Atlantic integration. At the same time, finding itself between two blocs makes the idea of joining much more complicated. Therefore, populist promises made by presidential candidates about joining NATO shortly is not the issue. For now, Ukraine should focus on strengthening its resilience inside and outside the state. Reforms and reaching NATO standards are a must-have on the Ukrainian agenda , but actual membership, with all its benefits and responsibilities is, instead, a long-term goal.