April 30, 2019
We have selected the best music and art festivals right across Ukraine, which would be a perfect summer trip destination. 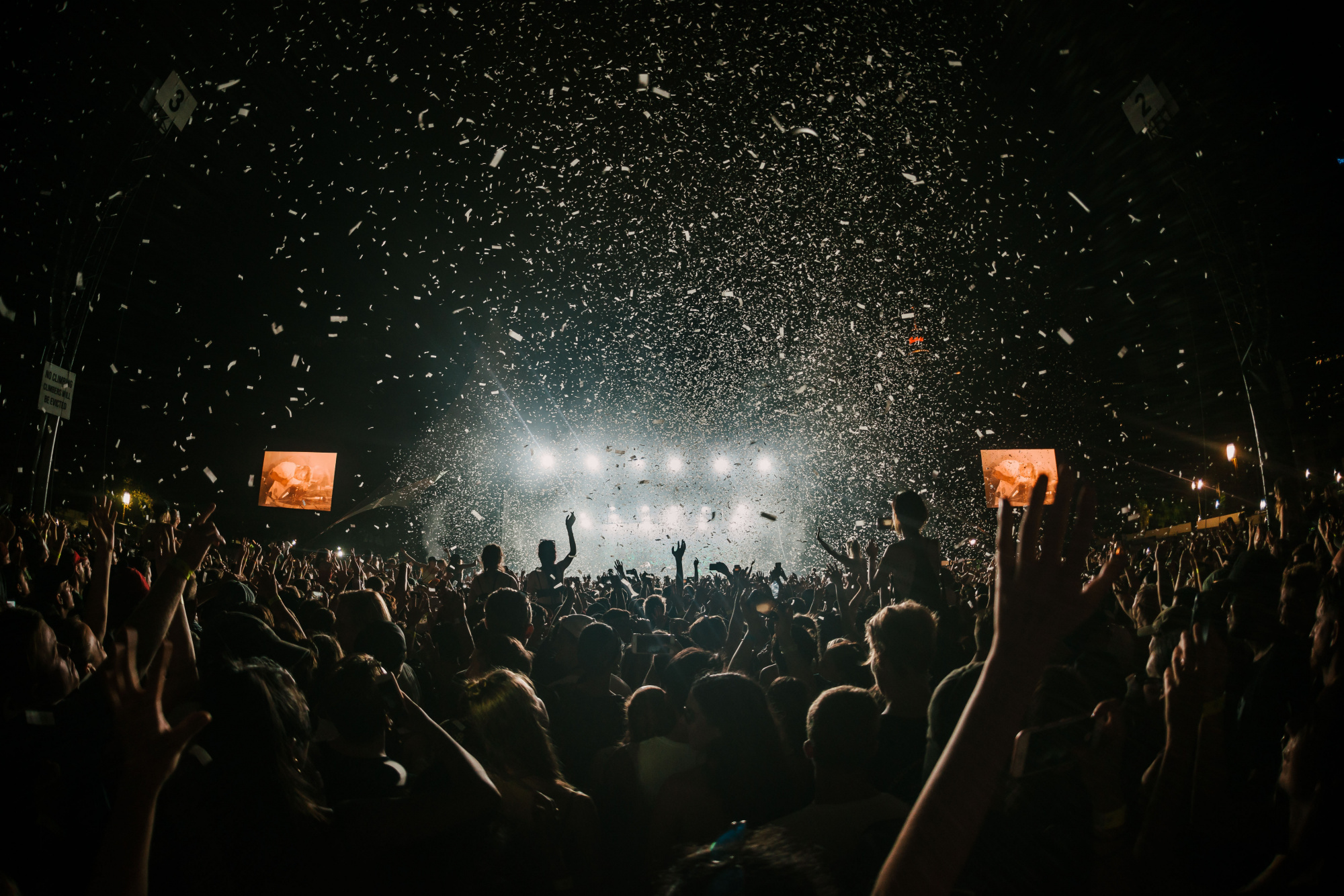 In 2014, when Russian aggression against Ukraine started, most foreign artists and musicians cancelled their gigs in Ukraine. However, this trend did not last long. Five years later, the Ukrainian concert and festival scene is more vibrant than ever. Big music festivals are not only the prerogative of Kyiv. There are also ones in Lviv and Kherson Regions, Ternopil and many other picturesque places all over Ukraine. Here are the most interesting ones. 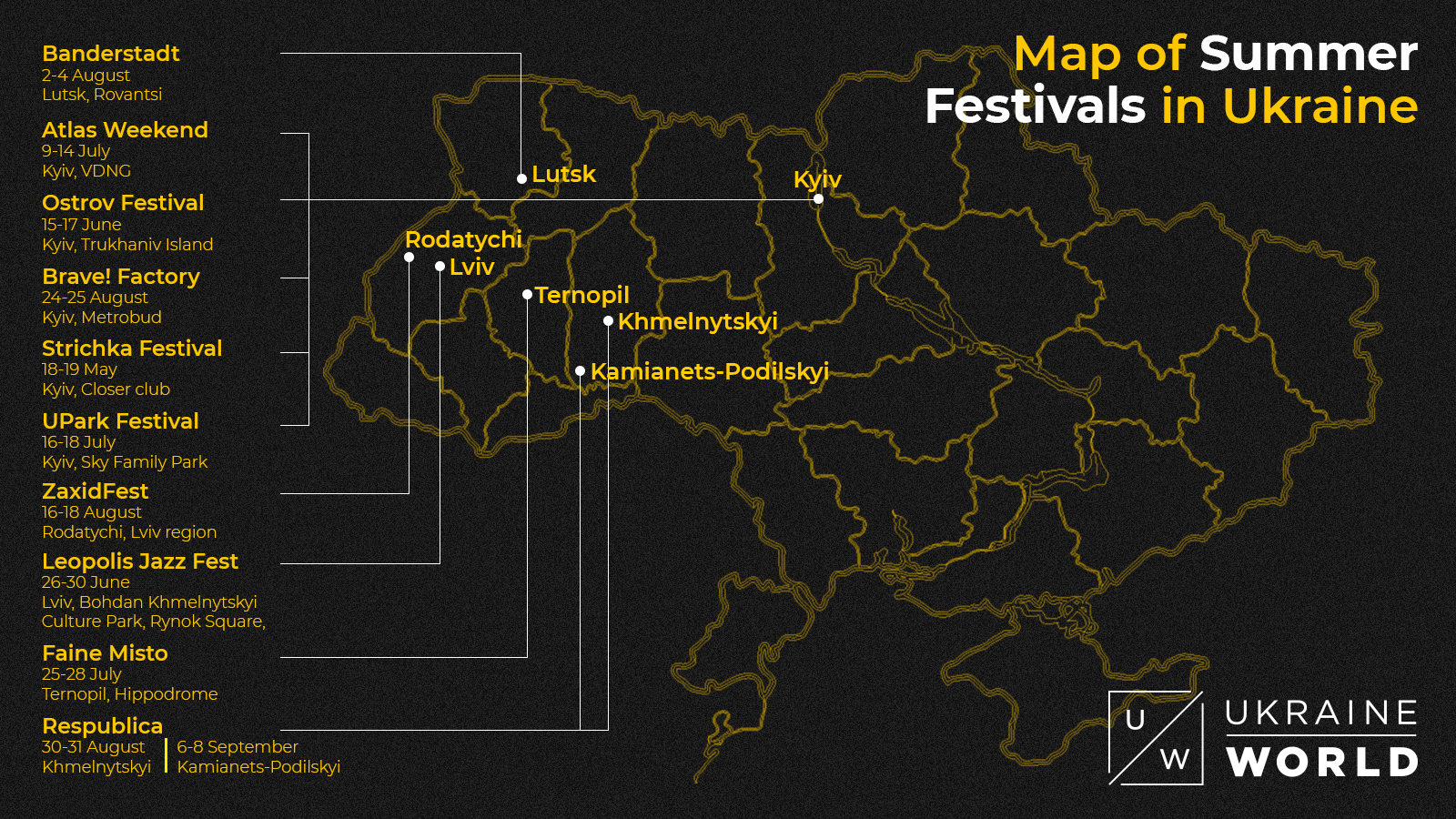 Atlas Weekend has been going since 2015. In its first iteration, it was  club-based festival with a heavy focus on Ukrainian music. However, this focus has shifted towards the European model of week long open-air festivals with camping and numerous side activities. Now, it is one of the two big summer events on the Kyiv music scene.

Lineup: Odyn v Kanoe, I Am Giant, Yurcash, Katya Chilly, Space of Variations, ANNA and others

This open-air festival aims to "promote Ukrainian language, culture, values, and music" and "popularise the Ukrainian national idea among young people." The name "Banderstadt" comes from a song of Ukrainian rock band My Khloptsi z Banderstadtu, which was an ironic and post-modern response to Soviet (and later Russian) propaganda blaming Western Ukrainians (and then Ukrainians in general) for being nationalists. Organisers also promote a healthy lifestyle: the festival is alcohol-free. Banderstadt also positions itself as family-oriented: admission is free for children under 12. In addition to rock concerts, the festival also offers "hutyrky" (dynamic discussions with famous people), nightly movie screenings as well as an arts and crafts fair.

This one is a festival of independent music and culture that was created by enthusiasts on the premises of a working plant. Brave! Factory is an event which involves everyone from a visitor to an organiser, from an artist to a factory worker. Apart from music, the festival also features an exhibition of art objects made by Ukrainian and world artists and sculptors.

This open-air music festival positions itself as a "Territory of Free People." It has been gradually developing since 2013 when a few friends at a party decided to create their own music festival. The number of visitors has grown from 1,500 in the first year to 16,000 unique visitors over four days in 2017. A curious feature of Faine Misto is that it's a big self-organized centre where everyone who wants to can join the development of the festival. The festival is named after the unofficial title of Ternopil, which can  be translated as "good city" or "city with a positive vibe."

This international open-air jazz festival, formerly known as the Alfa Jazz Fest, has been featured on The Guardian's "Top 10 jazz festivals in Europe" list. 2019 will be the eighth year for the festival. In addition to concerts by jazz musicians from around the world, jam sessions, master-classes and autograph sessions involving world jazz stars take place during the festival.

This festival has been going back and forth between Trukhaniv Island in Kyiv and the Black Sea coast. In 2019 the festival comes back home to Kyiv! The organisers aim to attract party-people with a solid line-up with the emphasis being on international artists as well as representatives of the best electronic music labels, event promoters and communities on the Ukrainian electronic music scene.

For the last few years, this festival has been taking place in two locations --- in Khmelnytskyi and Kamianets-Podilskyi, Khmelnytskyi Region. The organisers put strong emphasis on inclusiveness, environmental protection and international exchange between musicians.

This festival of modern electronic dance music is named after the famous Kyiv factory that produces ribbons (or "strichkas" in Ukrainian). Since 2014, it has been able to take the best of electronic music culture, dance culture and culture as a whole and combine them all together on its premises at this festival.

Lineup: Apocalyptica, Lacuna Coil, You Me At Six, Caspian, After The Burial, Eyes Set To Kill

The biggest open-air festival in Western Ukraine, ZaxidFest offers a bunch of foreign artists to those who are willing to spend three days in a picturesque neighbourhood of Rodatychi village which is a one-hour drive from Lviv.

Lineup: Thirty Seconds to Mars, Die Antwoord, Bring Me The Horizon, Rag'n'Bone Man, Nothing But Thieves, MØ and others

2019 will be the third year for UPark, an open-air festival which used to take place at  sports arenas in Kyiv (at the Olimpiyskyi Stadium in 2016 and the Lobanovskyi Stadium in 2018). This year, the organisers have opted for a park near the Dnipro River instead to offer visitors more side activities in addition to music.

This list barely scratches the surface of all the activities this coming Ukrainian summer has to offer. Many other highlight festivals -- Impulse Festival, Koktebel Jazz Fest, Hedonism Festival -- had, of 11 April, not announced the details. Ukraine has tons of interesting events and places for summer tourism which are supported by relatively low prices, welcoming people and tasty cuisine. A summer spent in Ukraine could be your best yet.

Crimea has a rich history and diverse culture. However, since Russia’s illegal annexation in 2014, Crimea’s unique heritage is jeopardized. Our new video produced...
VIDEO
November 6, 2020