September 27, 2019
Inclusive education is quite a novelty in Ukraine, where the overall inclusion rate is just 7%. However, with Soviet-style segregation and neglect for people with disabilities in place, the country has made tremendous steps towards an inclusive society. 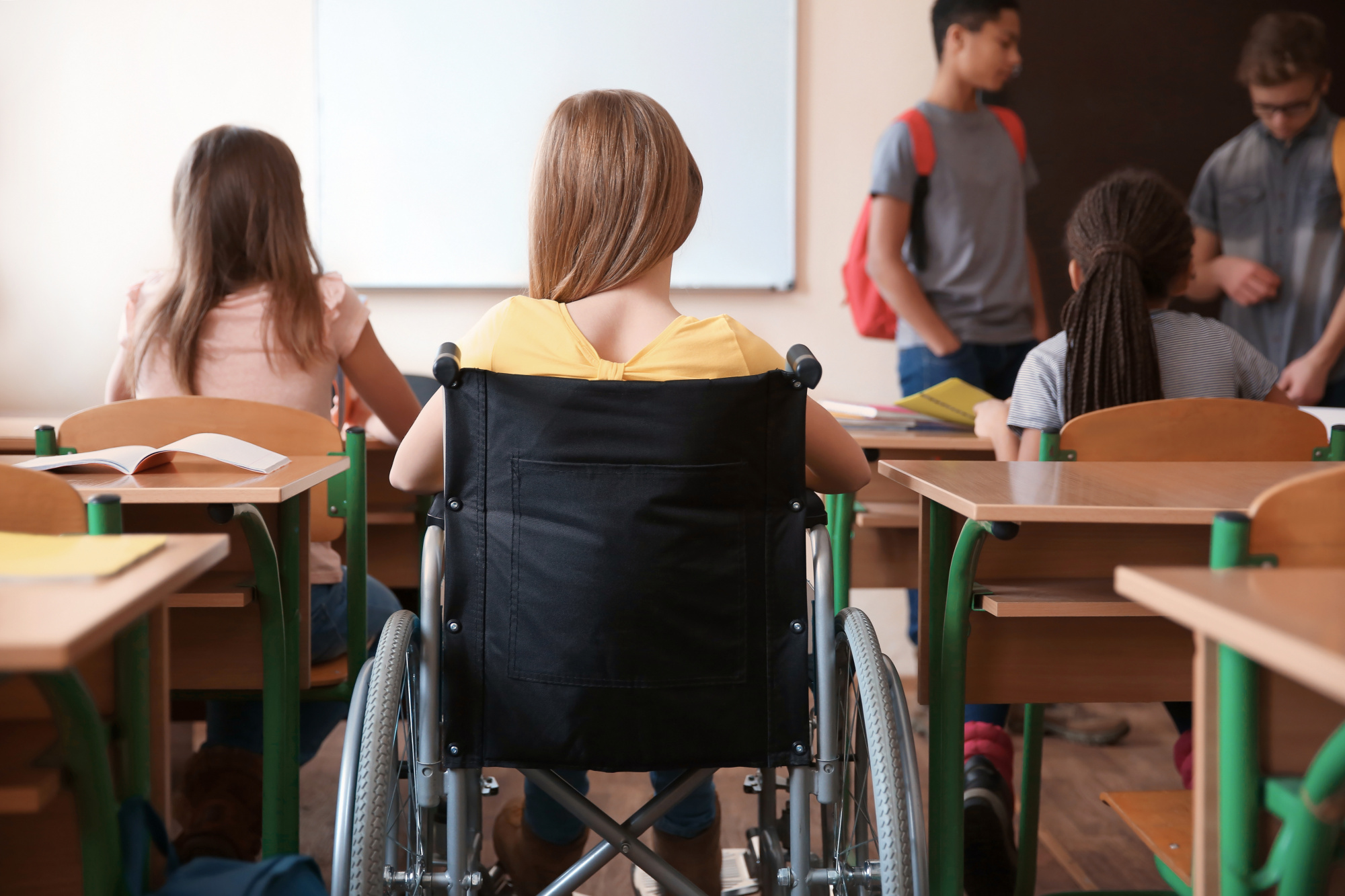 Of the 700,000 Ukrainian children with disabilities, more than 168,000 of them have special educational needs in Ukraine. While only 6% of schools have inclusive classes, the number is growing year by year since the legislative framework for inclusion was set in 2017.

It was largely thanks to the former First Lady Maryna Poroshenko that Ukraine got onto the path towards an inclusive society. Having no law-making powers, she started to advocate for inclusive education in 2017 and initiated changes in legislation. For the first time in Ukrainian history, the Law "On Education" was amended to protect children with special educational needs.

To make inclusion possible in every village and town, more than 580 Inclusive Education Resource Centers have been open all around Ukraine for the past 3 years. This novelty appeared in order to counter the ineffective practice of regional consultations.

To make inclusion possible in every village and town, more than 580 Inclusive Education Resource Centers have been open all around Ukraine for the past 3 years.

By 2017, there were only 25 psychological medical pedagogical consultation services (one per region) which were overloaded. Valentyna Hivrych, Director-General of the Directorate of Inclusive and Extracurricular Education of the Ministry of Education and Science of Ukraine, says that parents often complained since the diagnosis was made in a hurry after 20 minutes of checking. "So we had to create a body that would move away from the diagnosis and would allow for a child to be examined appropriately, according to international and national norms, and draw a substantial conclusion", shetells UkraineWorld.

Today, such an examination can take up to 10 days. It includes psychological and pedagogical assessment of a child's development, offers correctional and developmental services and other qualified support if needed. What's more important, conclusion of this public institution has a legislative power. With a mere appeal, parents can oblige any pre-school, general secondary school, extra-curricular or professional education institution to organize an inclusive class or group and assign a teaching assistant there. Hence, any parent with the slightest suspicion can come to check his or her kid.

With a mere appeal, parents can oblige any pre-school, general secondary school, extra-curricular or professional education institution to organize an inclusive class or group and assign a teaching assistant there.

Each Inclusive Research Center can provide services to 7-12 thousand children in total, including those with special educational needs. Unlike before, these public institutions function regardless of whether there are any children with disabilities.

Although the general budget for inclusion will not increase, all the costs previously allocated for the creation of Inclusive Resource Centers are now directed to support children with special educational needs to organize the working space in classrooms.

Accessibility is another challenge for Ukrainians with disabilities. In August 2019, the Cabinet of Ministers signed a decree "On the organization of inclusive education in out-of-school educational establishments". It sets tasks to secure unrestrained access to buildings according to "principles of universal design in the educational process", "smart adjustment" and "individualization of educational process for students". As for January 2019, Ukraine adapted around 74% of middle schools for unrestrained access to the first floor, though ramps, signs and lifts cannot be found everywhere needed yet.

As for January 2019, Ukraine adapted around 74% of middle schools for unrestrained access to the first floor, though ramps, signs and lifts cannot be found everywhere needed yet.

Valentyna Hivrych says to UkraineWorld, the lack of technical adjustment is not a problem, since "many schools started to accept children with special educational needs before they got a ramp". What's more important is having an inclusive society and people's openness.

Yuliya Aronova, mother of 9-year-old Diana, who has Down Syndrome, agrees. This is the 3rd year since her daughter came to school in Lviv, Western Ukraine. "We were lucky with the school," she tells UkraineWorld, "because despite the absence of experience, practice and knowledge, the teachers and administration just accepted the philosophy of inclusion". Aronova believes nothing will be effective without this. While she thinks her experience "would definitely be different" if not the work of the government, she understands that not all parents may relate to her positive experience in Ukraine.

While children are considered to be the most open to otherness, the Soviet-era stigma of a "special child", often considered ill, persists among adults. Today, many look at children with special educational needs with sorrow and pity, Olesya Yaskevych, mother of a son with disability notes. She's also  a founder of the NGO To See with Heart, and says they strive for children with disabilities to be perceived as "normal" and equal.

While children are considered to be the most open to otherness, the Soviet-era stigma of a “special child”, often considered ill, persists among adults.

To change the wrong concept of disability among adults, Yuliya Aronova from Lviv promotes tolerance within her NGO Wings Spread. They try to change the attitude of people through social advertising, photo exhibitions, media, and inclusive events for children. Besides that, they educate students in pedagogical institutes and provide training for teachers.

The mother of a girl with special educational needs is sure that the warm atmosphere and relations between her kid and others in class is the merit of teachers and particularly the teaching assistant. Prior to the reform many schools were afraid of accepting children with disabilities. Zhanna Kharchun, Principal of Prosvita Lyceum of Lviv City Council, recalls that everyone was afraid because they “did not know what to expect”. Today, fear is replaced with excitement among teachers and pupils.

Prior to the reform many schools were afraid of accepting children with disabilities. Today, fear is replaced with excitement among teachers and pupils.

"Both teachers and students are very open to such children [with disabilities]. They support and help them all the time, and their classmates care about them so much that it is impressive," says Kharchun to UkraineWorld. She adds that such support greatly facilitates their work. According to a survey by sociological agency FAMA, provided by Aronova to UkraineWorld, almost 70% of teachers in Lviv Region claimed they were ready to work in an inclusive class. At the same time, less than 7% understand the mechanisms of inclusion at school.

In spite of the number of teaching assistants increasing, Ukraine significantly lacks qualified specialists in inclusion. To make sure that new methodologies for inclusion work, the Ministry of Education and Science has been actively training teachers and their assistants. The Institute of Postgraduate Education has been providing 1-3-day courses in Ukrainian regions on inclusion for teachers and principles. With the help of independent experts, the Ministry gives licenses only to those who pass the test. As of the time when this article was being written, 511 out of 869 were sufficiently qualified to work with children with special educational needs.

To make sure that new methodologies for inclusion work, the Ministry of Education and Science has been actively training teachers and their assistants.

Today, teachers of inclusive classes get 20% on top of their salary, while teaching assistants get the full wage. The Ministry also plans to use 65% of the budget previously allocated for IRC to ensure the payment for teachers of corrective-developmental classes.

Step back from "special schools"?

Around Ukraine, there are 141 schools with special classes. While this is already much less compared to the number of inclusive ones, it is expected that there will be fewer and fewer children in special classes. Following international standards, the Ministry does not plan to support special classes as they segregate children.

Following international standards, the Ministry does not plan to support special classes as they segregate children.

With all the reforms in place, special education institutions also remain. Many of them are now inspected. "In these special institutions there were children who did not belong there, they perform some kind of a social function," Hivrychsays. Nonetheless, they will be available for those who need special care.

As Maryna Poroshenko told RFE/RL last year, Ukraine will most probably follow the mixed system "where inclusive education in mainstream schools and special facilities for people with severe nosology work".

Although almost 90% of children with special education needs are still held within four walls of stigma and their parents fear, Valentyna Hivrych does not lack optimism. "We plan to make all schools inclusive, even specialized ones," she tells UkraineWorld. "When the process was launched, not many knew what the word "inclusion" meant. Today, everyone knows and uses this word".

Beyond Religion: What media outlets in Armenia, Georgia, Moldova and Ukraine say about the autocephaly of Ukrainian Orthodoxy