December 1, 2020
There are no tours around the capital of Ukraine dedicated to the history of the Holodomor of 1932-1933. Moreover, you will probably hear nothing during sightseeing tours around Kyiv about this tremendously dark and important chapter of Ukrainian history, when one of the greatest crimes in human history took place. But with the help of the new Track Holodomor History mobile app, you can discover this story on your own.

The Holodomor (literally in Ukrainian "mass death from starvation") - the genocide of the Ukrainian nation, committed by Soviet authorities in 1932-1933 by artificial famine. The Holodomor was aimed at Ukrainians, who in majority were rural population, so it is often thought that only peasants starved, suffered and died. Nevertheless, this genocide struck all parts of society, meaning that cities have their own stories to tell - as witnesses, as saviors, and as participants.

Created specially for UkraineWorld, the Holodomor Museum charted a route around Kyiv, which includes 12 different locations and gives a complete picture of what the Holodomor was. 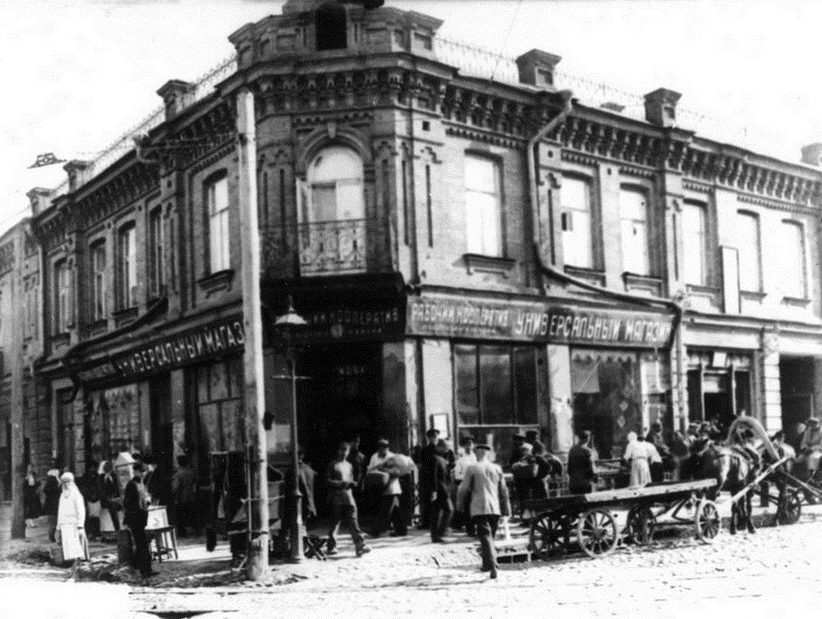 At the beginning of 1930's Kyivans mostly had access to food by receiving state ration baskets and ration coupons that were so meagre that one could hardly ever feel full. On rare occasions raw food could be bought for money at collective farm markets and in so-called state 'commercial shops'. The selection was poor, prices sky-high, and the shelves of these shops were often empty for days. As eyewitnesses Ovcharuck Mykola remembers, queues for commercial bread were enormous, and still there was never enough of it. Police on horseback often tried to disperse these queues using physical force. 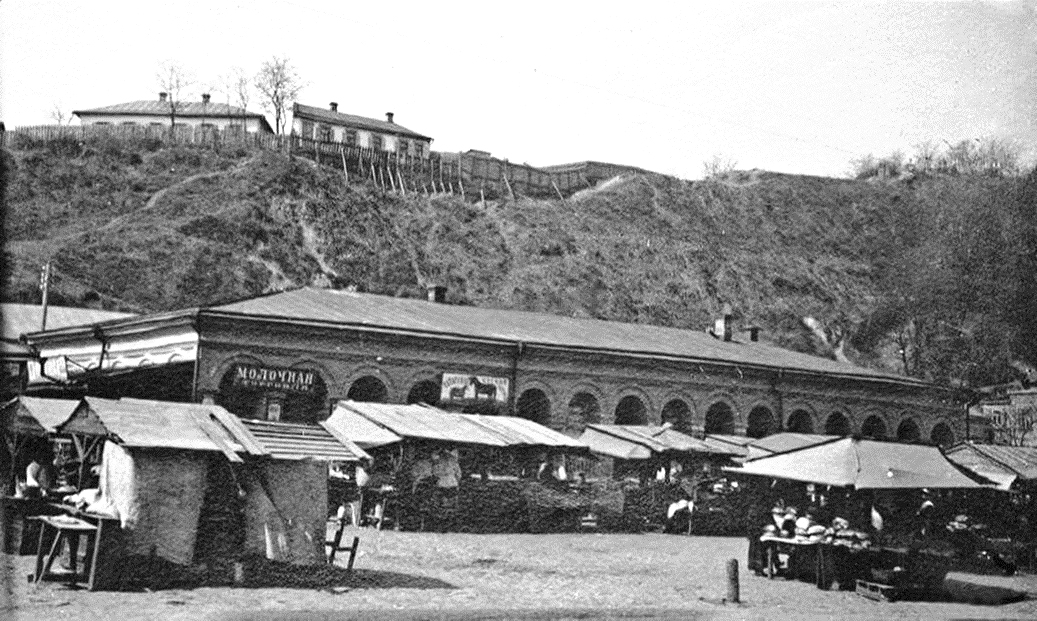 Markets were places of high demand during the Holodomor as a place of food concentration. Refugees from starving villages were attracted to markets by hopes of trading hand-made goods or valuables for food or money to buy it. That is how the Zhytniy Market became a spot for speculative or unlicensed trade. Sychenko Petro, an eyewitness to the Holodomor, also remembers that this place in the 1930's became highly criminal and dangerous, because there were products sold made of human's meat, which was the result of mental disorders among people caused by prolonged starvation and lack of food. 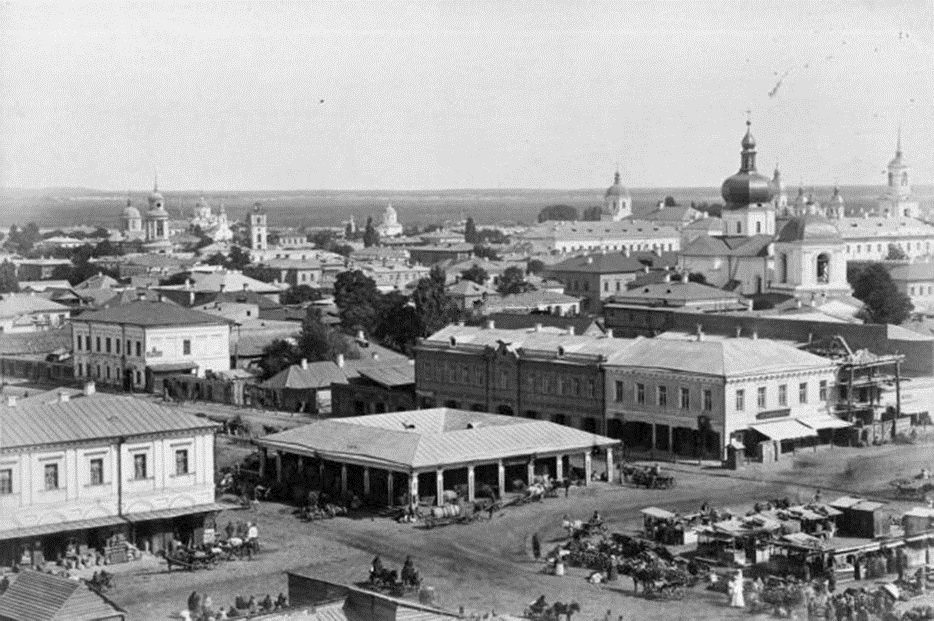 Here you can see a graphic narration based on memories of Halyna Afanasieva, who remembers that the boulevard was full of starving peasants who had come from the villages and were sitting, lying, dying on the benches. 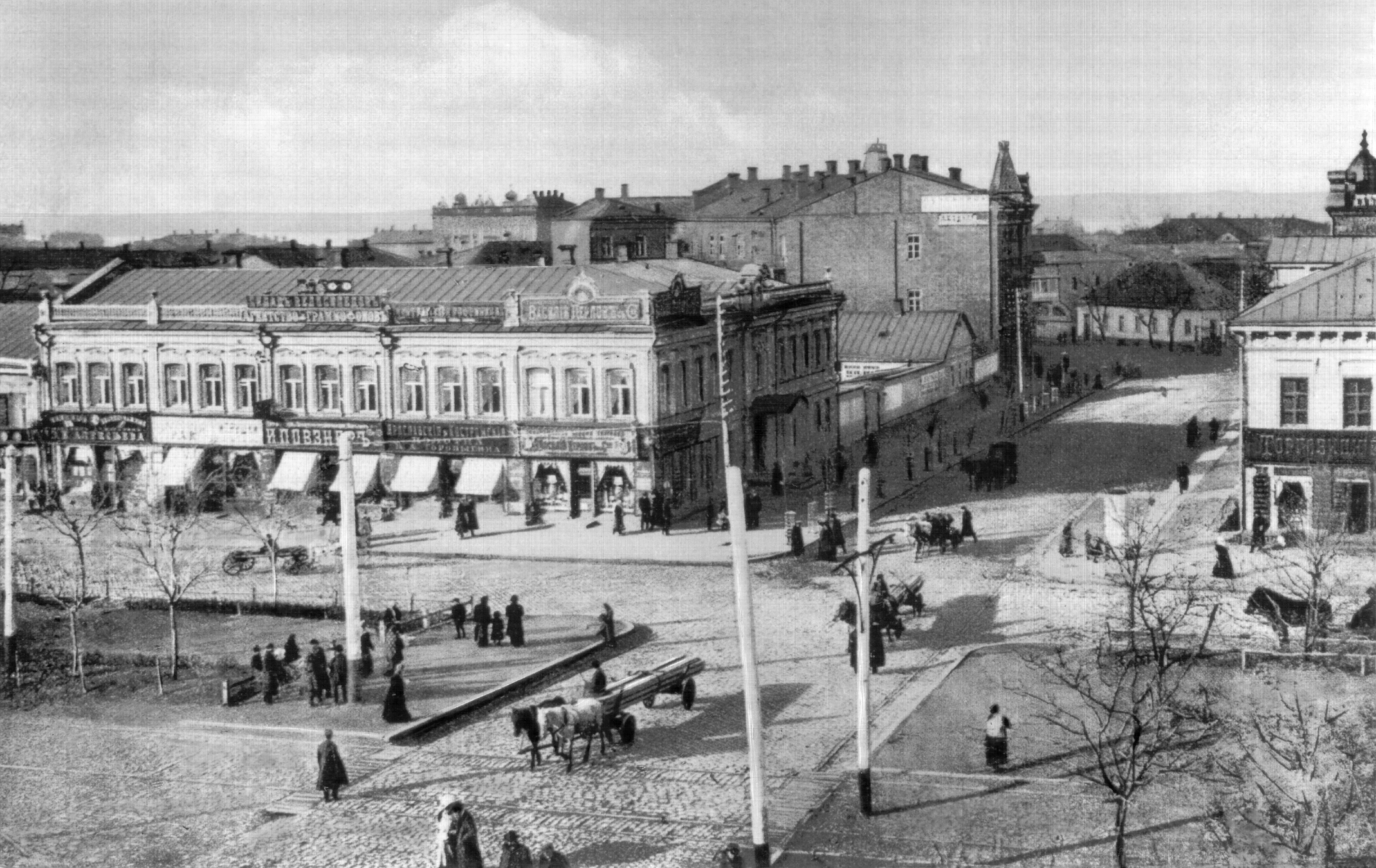 Due to the influx and accumulation of hundreds of people fleeing the famine, unsanitary conditions made disease spread like wildfire. Among the illnesses which accompanied hunger were smallpox, dysentery, and typhoid fever, not to mention invasion of lice and bedbugs. To put an end to sanitary catastrophe citizens were given free tickets to public bathhouses, while beggars from the streets (peasants) were forcibly taken to temporary disinfection chambers, one of which was located in Podil, near the market. 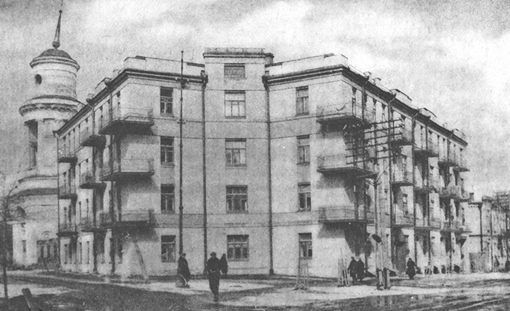 Podil District was a common destination for peasants also because of the dozens of churches located there. Starving beggars came there in search of food. But the history of the Church of the Resurrection is kind of unique - it was used by municipal authorities as a collection point for corpses and apparently as a mass grave. Although those who died of hunger were usually brought to cemeteries around cities, where they were buried anonymously in mass graves, according to memories of four eyewitnesses this church was also used for this purpose. In 1935 the church was destroyed and an apartment building was built there. 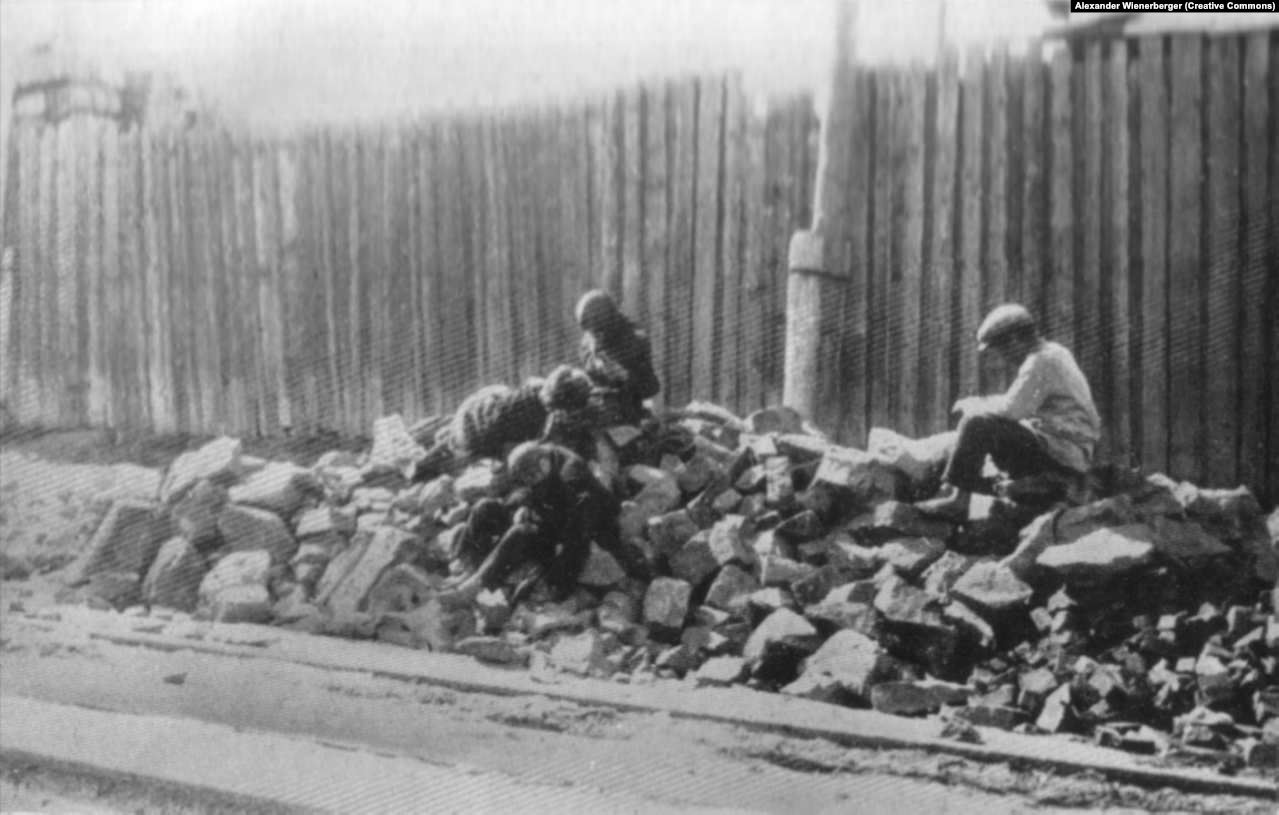 Children were one of the most threatened social groups during the Holodomor. Thousands of abandoned children left by their parents who could no longer feed them and orphans of dead or deported parents stumbled around looking for food. Authorities collected these children and kept them in special quarantines. According to the report of inspectors from October 1932, the quarantine at Skovoroda Street was a shelter to 120 children (77% peasants' children, 23% workers' children) while the building was designed to accommodate only 45. This led to terrible conditions. But these institutions were highly important for Soviet authorities because the separation of children from their parents made it possible to bring up Soviet citizens loyal to the totalitarian state. 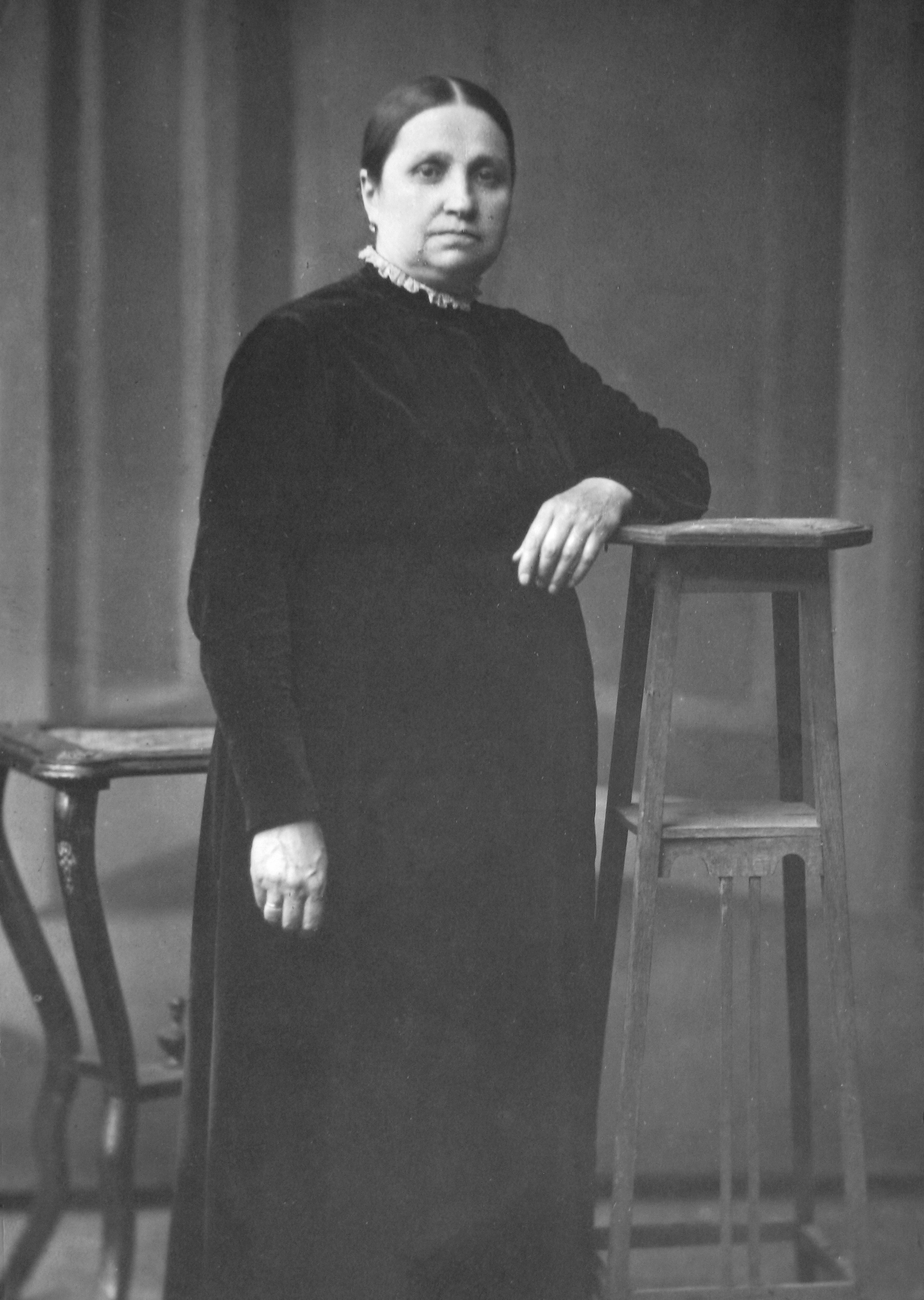 The terrible history of the Holodomor knows its own examples of heroism. For instance, Yevdokiya Nechaieva, the head of a large family and owner of once prominent (before the arrival of Soviet government) manufacture for sweets and gingerbread production during the Holodomor saved up to 40 people. She took starving people from the streets, hid them in her backyard (which was prohibited), fed them with supplies, and then let them go and return to their home villages. 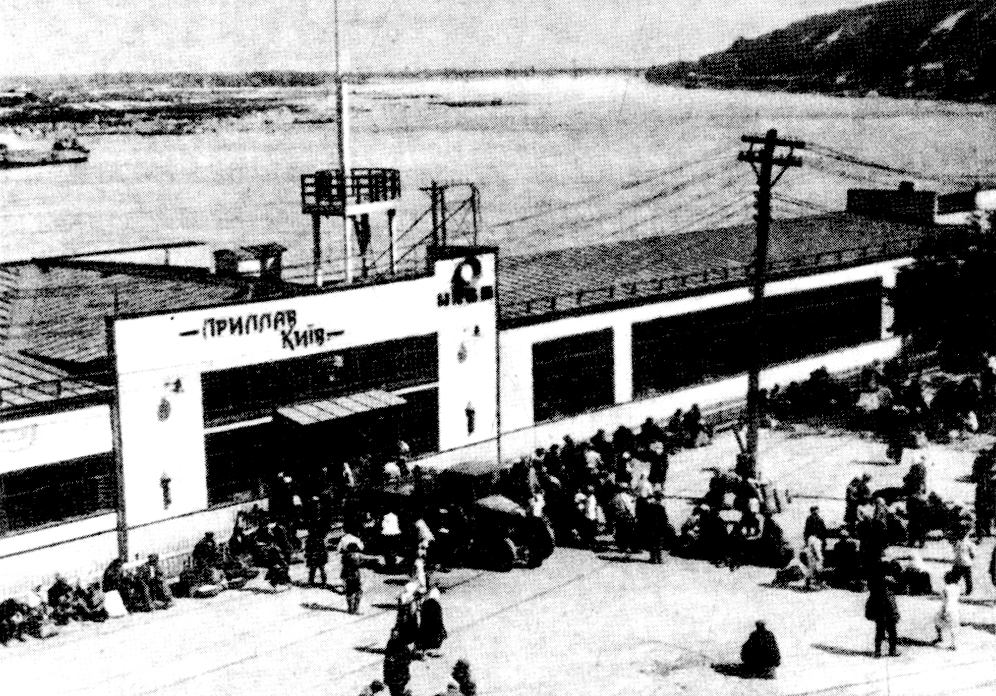 The mortal danger of famine loomed mostly upon villages and rural population. This made thousands of people leave their homes and come to the cities seeking food. The vast majority of them came on foot, while the rest came on trains and steamboats. The boats would arrive at the Kyiv River Terminal. As Semen Kozlov remembers from his childhood, he saw bodies carried out from the steamboats - they were villagers who had died on the trip. This process was deliberately legally stopped in January 1933 with the introduction of an internal passport regime to prevent the cities from overcrowding. 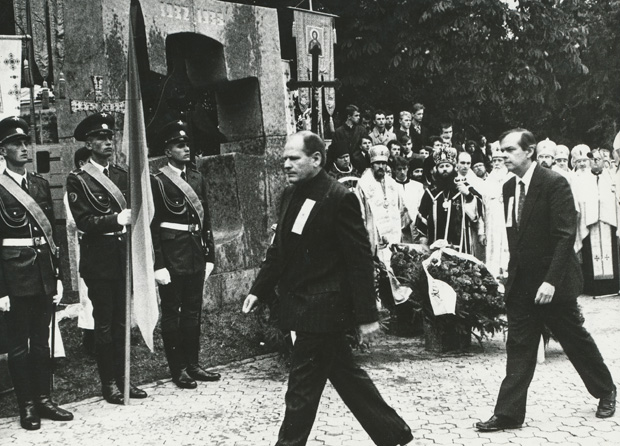 The truth about the Holodomor was kept secret by the Soviet regime for nearly 60 years - it was prohibited to talk about it and people were arrested for saying anything about the catastrophe, even in their private diaries. Remembering the victims of the genocide was one of independent Ukraine's most urgent first tasks. On September 12, 1993, this first monument to the Holodomor's victims, one of the first, was installed. 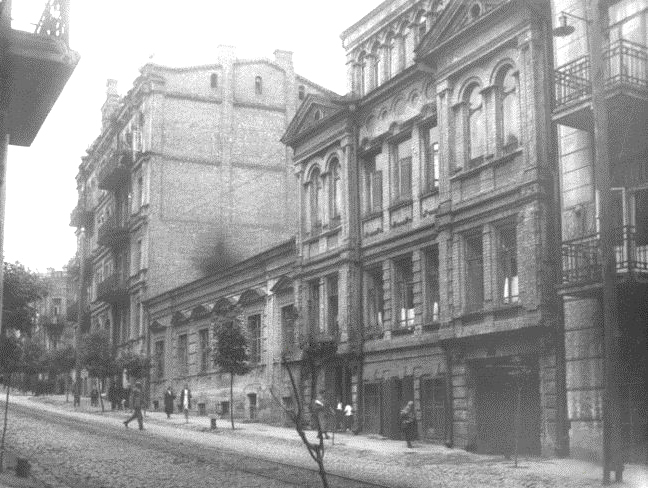 Read an illustrated narrative based on the memories of Natalia Mossokovska, who remembers that in 1932-1933 a black flag was raised when somebody died in the house. She said that during the Holodomor, the flag was raised every day. 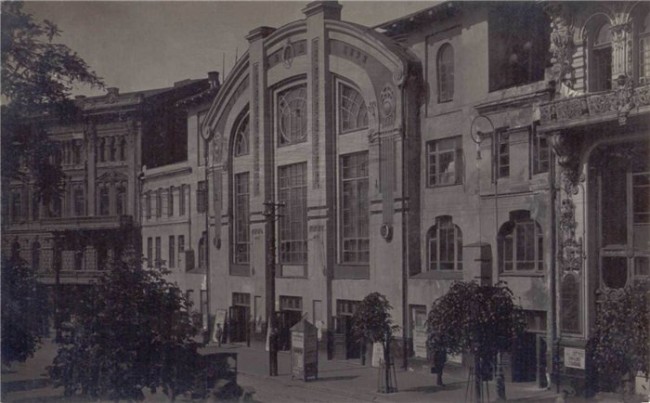 Torgsin (abbreviation for trade with foreigners) was a network of state-owned shops which sold goods and products for foreign currency, gold, silver and jewelry. Launched in the Soviet Ukraine in 1931, torgsins played a huge role during the Holodomor as a means of extracting from people every possible bit of private wealth. Desperate from hunger, people traded their family valuables to the state in exchange for food. Although the exchange rate was extortionate, people still gave everything and anything they could in order to buy food. Moscow eventually earned tons of gold and silver. 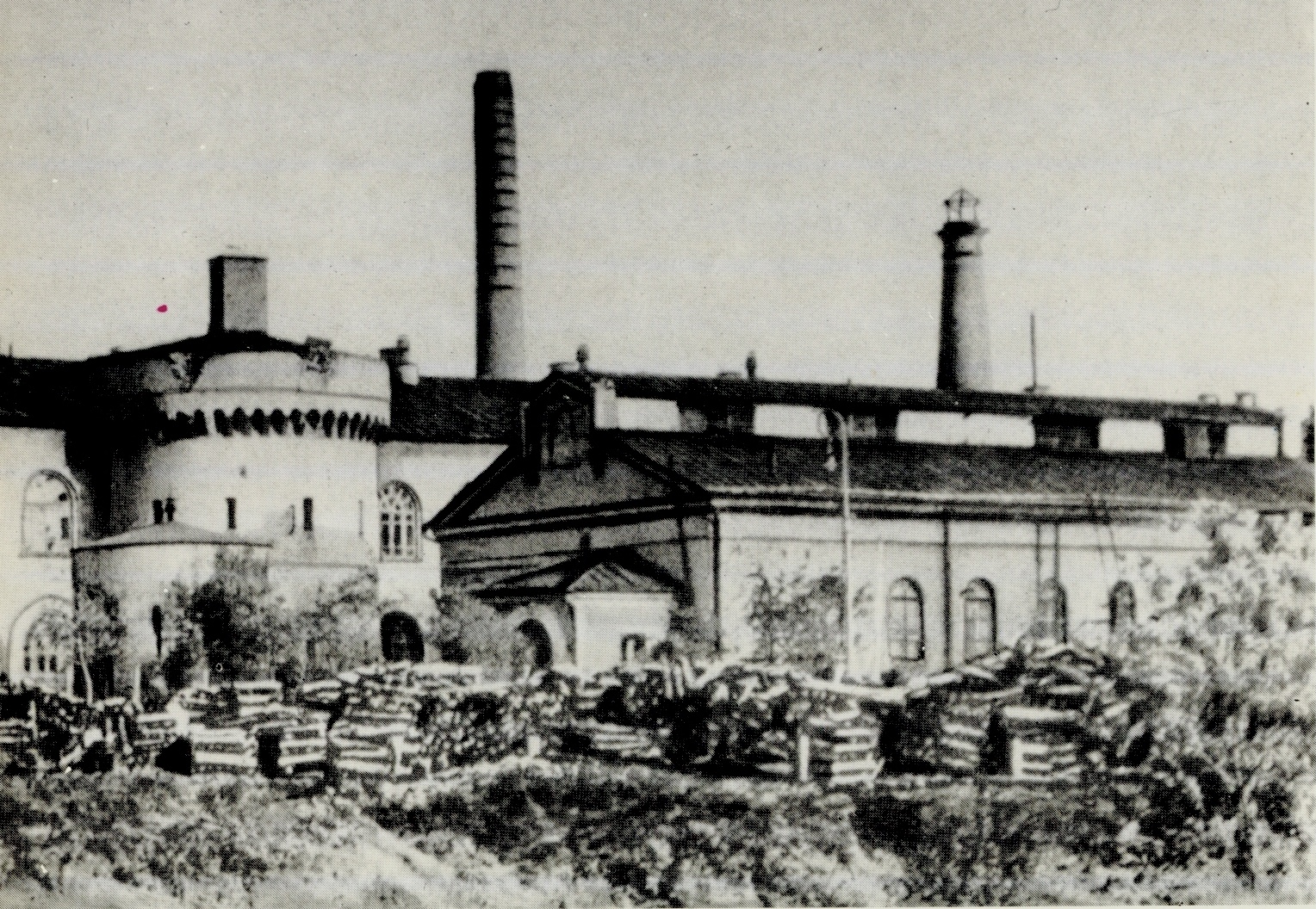 The last stop is a famous Ukrainian factory. This may be an unusual spot, but to understand the Holodomor in detail, one must understand relations between villagers and urban workers. The situation in Ukrainian villages in 1932-1933 was murderous - peasants were forced to enter state collective farms and relinquish  their property. Resistance was brutally crushed, as whole villages were 'blacklisted' from receiving food or goods and murdered with hunger. On the other hand, workers were considered by the authorities as loyal cogs in the machine who were less likely to support Ukrainian independence from the Soviet Union. However, during the Holodomor plant workers suffered from the lack of food as well, as it is stated in numerous documents regarding factory canteens. Despite this, Ukrainians from villages left their houses and tried to get jobs in the city. This was possible only until the end of 1932, when internal passports were introduced to restrict people's movement and employment.

This is the end of the tour. It's not an easy or pleasant walk, but it sheds some very important light. The Holodomor is part of Ukraine's and a lesson for all mankind: This must never happen again.

For more locations and more information about the Holodomor in Kyiv, download the Track Holodomor History mobile app on AppStore and GooglePlay. The project was created by the Holodomor Museum with the support of Ukrainian Cultural Foundation.

Track Holodomor History - a unique historical tour app about the Holodomor, which explores and delivers information about locations of Kyiv which were associated with the Holodomor during 1932 and 1933. The app includes memories of eyewitnesses, documents, archival photos and videos, audio, and illustrated narratives.

The 30th anniversary of Ukrainian independence invites us to look back into the history of Eastern Europe and try to understand why Ukraine’s independence is so...
Ukraine
September 27, 2019

Inclusive education is quite a novelty in Ukraine, where the overall inclusion rate is just 7%. However, with Soviet-style segregation and neglect for people with...