May 11, 2018
As the world turns slowly to face and deal with global climate change and threats of industrial pollution, each country has its own run at sustainability. 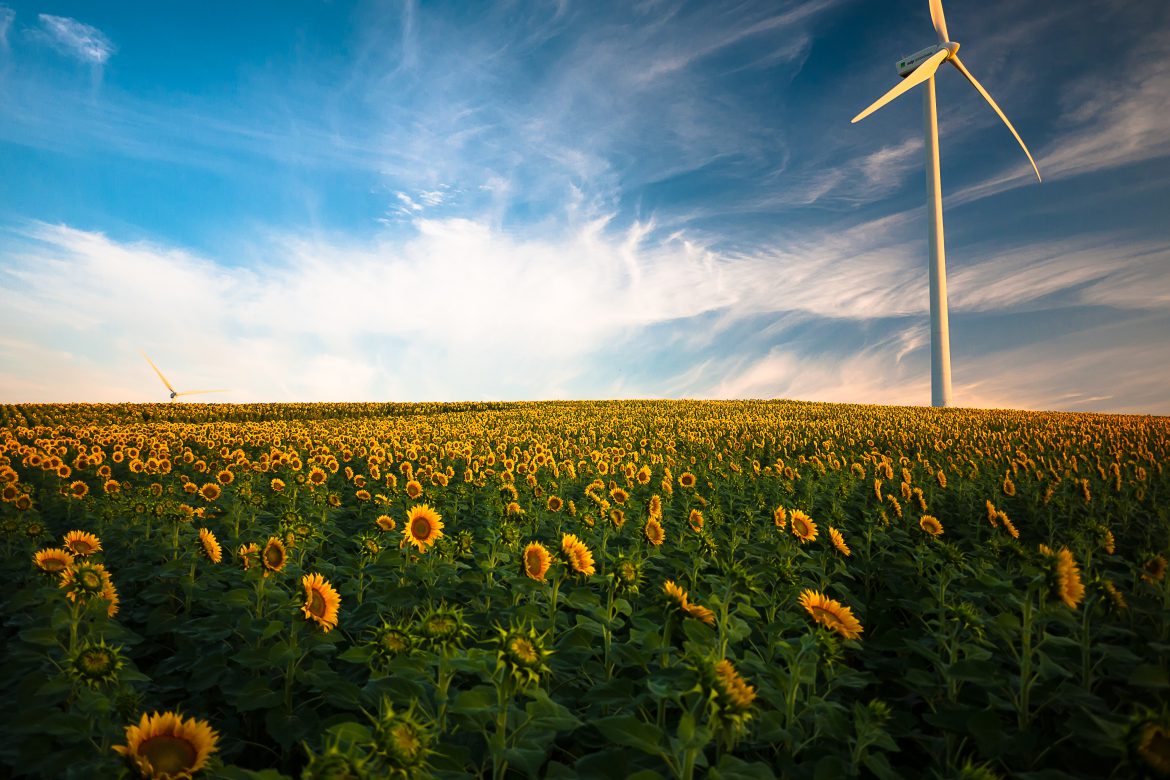 According to the Climate Action Tracker Ukraine's current rating is "critically insufficient". The research states that Ukraine is not even close to those actions that will keep the rise in the average global temperature below 2 °C and pursue efforts to limit the temperature increase to 1.5 °C above pre-industrial levels in accordance with the Paris Agreement. The sad statistic comes from the uncertainty in implementation of climate policies and overall political instability, as researchers simply cannot calculate the course and make perhaps more optimistic projections. However, in national programs and international agreements Ukraine undertook commitments which the Government has to consider. Here are the most important eco-obligations of Ukraine, directly linked to the country's ecological challenges.

In 2017 Ukraine adopted the national Energy Strategy for the period up till 2035 , which is called "Safety, Energy Efficiency, Competitiveness". As stated in the document, the goal is to increase the share of renewable energy to 25% by 2035. The national energy supply currently consists of 30.4% coal, 28.9% natural gas, 25.5% nuclear, 11.6 % oil, and around 4% consists of renewable energy resources. 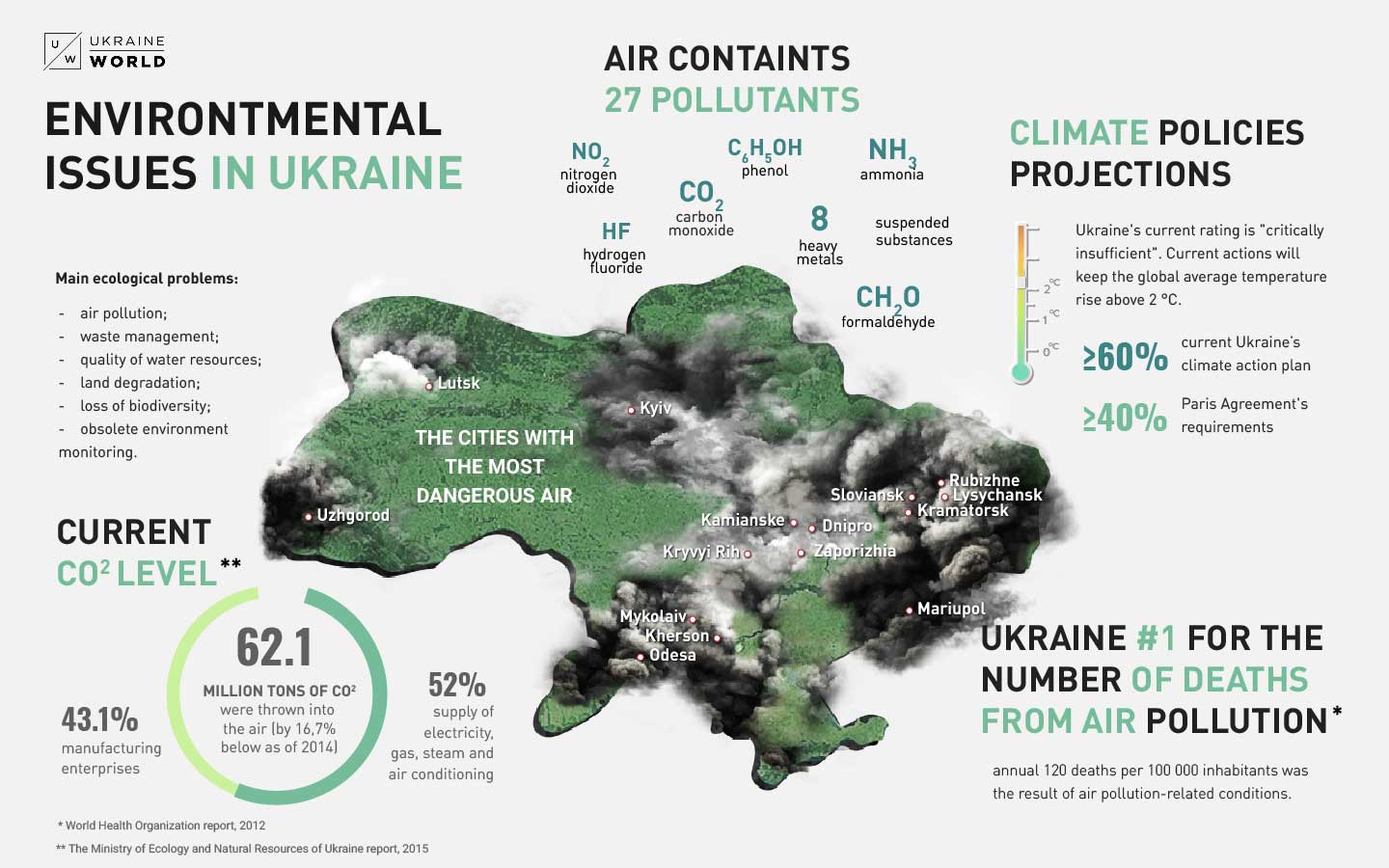 In a recent interview for the Kyiv TV Channel Serhiy Savchuk, Head of the State Department for Energy Efficiency, said that Ukraine has made some positive moves towards replacing gas. According to his statements, the public sector consumed 24 billion m3 of gas in 2014, whereas in 2017 the figure was 18 billion m3. Although he does not specify whether savings in gas were reached thanks to renewables or due to other reasons, like the post-2014 economic crisis.

While looking for future benefit from reducing gas, oil, and coal, it has to be taken into consideration that global investment in electricity conservation technology grows by 2/3 annually. And Ukraine can success in the manufacture of lithium-ion batteries, as the country ranks first in Europe for lithium and second for nickel stocks.

Before signing the Paris Agreement in 2016, Ukraine delivered its climate action plan – the Intended Nationally Determined Contribution (INDC). But the targets Ukraine declared don't meet the requirements of the Paris Agreement: Ukraine planned to not exceed 60% of 1990 GHG emissions level in 2030, while according to the Agreement the level should not exceed 40%.

It might seem that Ukraine's share of global warming is too poor to take it into account, but according to the groundbreaking Carbon Majorsresearch, one Ukrainian company got onto the list of 100 active fossil fuel producers that are to blame for 71% of industrial greenhouse gas emissions since 1988. That company is Ukraine Coal, with its share of 0.5% global industrial GHG. 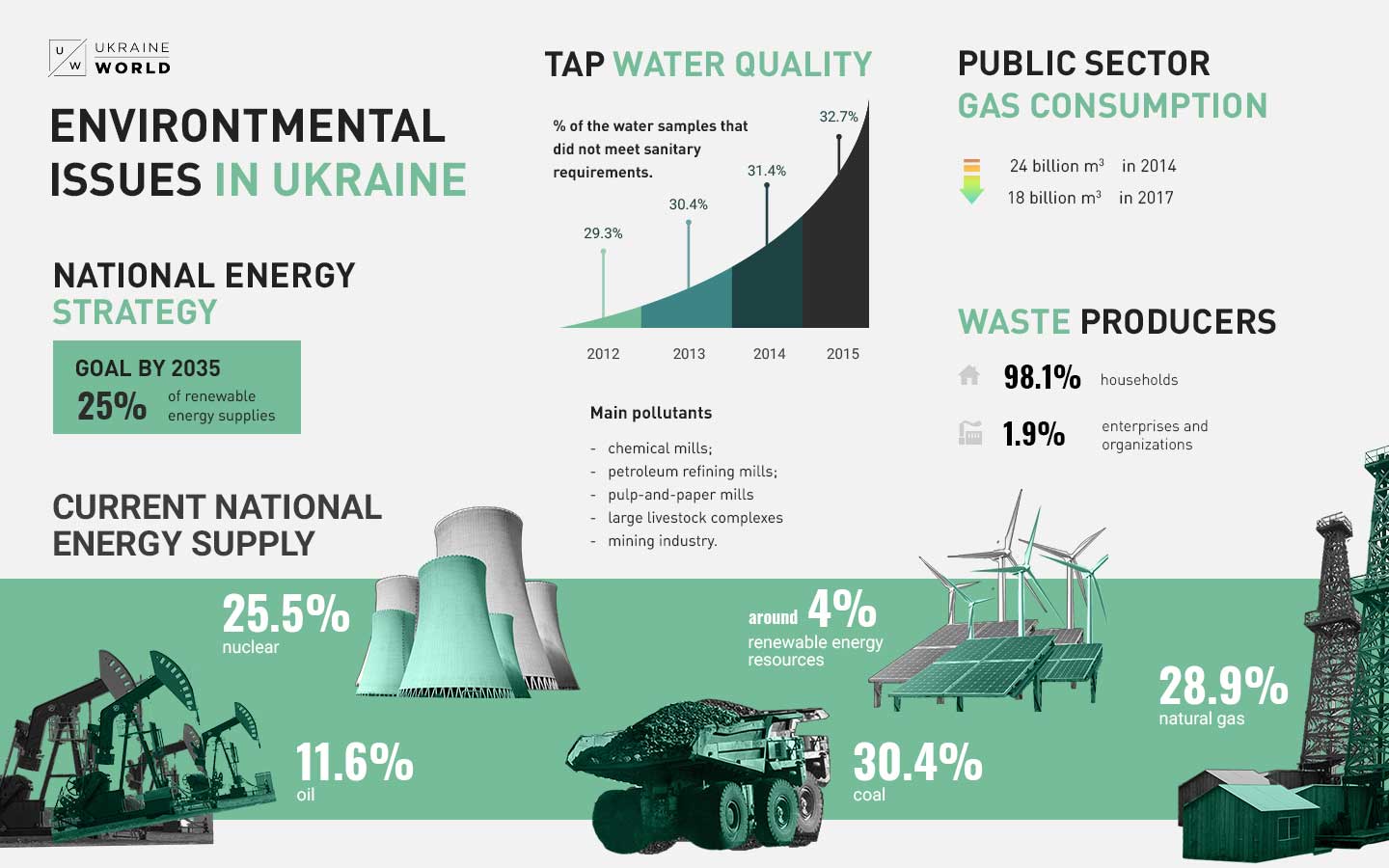 Ukraine currently lacks a solid and, as demanded by the Paris Agreement, ambitious strategy of eco-friendly economy development and environmental conservation. The Ministry of the Ecology and Natural Resources, together with the Ministry of Energy and Coal Mining, developed the Concept of implementation of state policy in the field of climate change for the period up to 2030. But the Concept is not an action in itself, and the adopted Plan of Measures (December 2017) describes what laws and actions should be taken to finally start implementation. "These documents not only define the new national climate policy of Ukraine but they also should contribute to the implementation of current low carbon projects. This is a way to integrate the principles of sustainable development into national, regional and local strategies and development systems," the head of the Ministry of Environment, Ostap Semerak, said when the Ministry sent the draft plan to the Government.

The sacred cow of Ukrainian international politics, the EU-Ukraine Association Agreement, maintains Ukraine's vows to make changes and reach goals in the economy, financial sector, legal system, etc,. in return for EU financial and political support and access to EU markets. But there are important ecology commitments too. According to the Agreement Ukraine has to adopt national legislation in line with European legislation in order to have relevant norms in measuring and identifying GHGs. This is a key missing factor in all of Ukraine's ecological promises – absence of the emissions trading system (ETS), while the Agreement envisages the introduction of an ETS within two years of its coming into force (it came fully into force in 2017).

According to the last report (March 2018) from the International Carbon Action Partnership, Ukraine is currently working on its plans for ETS development under the Ukraine-EU Association Agreement with the assistance of the Partnership for Market Readiness, the European Bank for Reconstruction and Development, the United States Agency for International Development, the Deutsche Gesellschaft für Internationale Zusammenarbeit and other institutions. The Ministry of Ecology and Natural Resources of Ukraine is responsible for its delivery.

Unfortunately, at the present time Ukraine is following world trends in relying on gas and oil as the main energy resources. The Global Energy and CO2 Status Report demonstrates that in 2017 global energy-related carbon dioxide emissions increased by 1.4% after three years of remaining flat. That is due to strong economic growth and increasing demand for energy, which was satisfied by oil, gas, and coal to the level of 70%. China and Asian countries provided the majority of growth, while the USA, UK, Mexico, and Japan provided in terms of the decline in carbon emissions. In its turn, Ukraine seems to have more reasons to become efficient , as the mechanisms supplying gas- operated, oil- operated, and coal-operated industries in the main hail from the Soviet era and are on the verge of their working lifespan. This situation should be used by the Government to redesign the national economy in a sufficient, eco-friendly way.

Anna Kyslytska
An analyst at Internews Ukraine and at UkraineWorld, an information and networking initiative
Next article