December 17, 2018
Ukraine’s information technology sector has been among the country’s fastest growing industries, and IT experts from Ukraine have found international success. Its companies, however, have developed largely in service and outsourcing. IT in Ukraine may outgrow these market segments eventually, but it isn’t there yet. 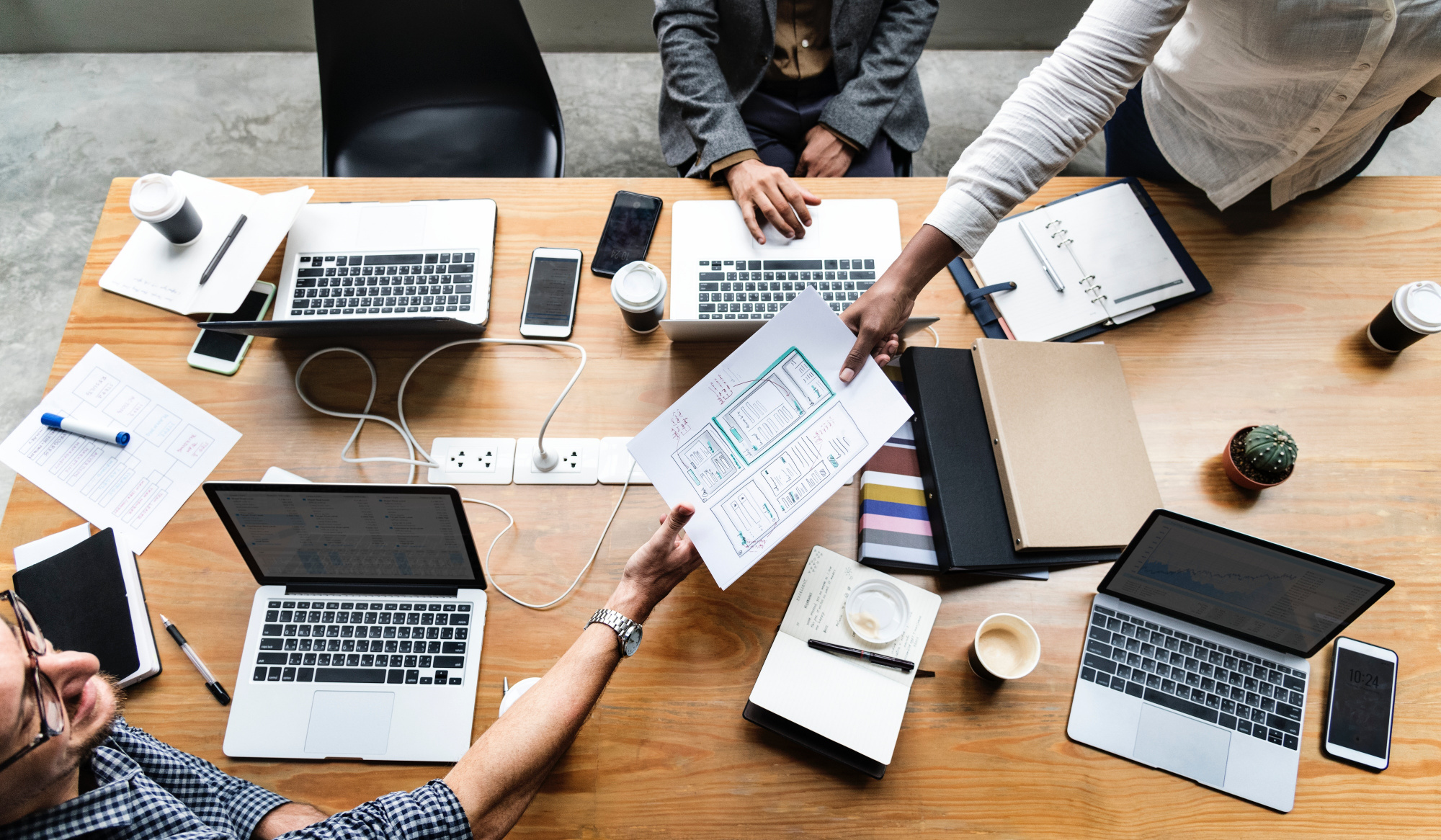 Over the last ten years, exports from the Ukrainian IT sector have grown by 540 percent—from $243 million to $1.311 billion, according to a recent report. This puts it in third place among Ukrainian exports. IT companies brought in 4.1 billion hryvnias ($146 million) in tax revenue to the state budget in 2017—a figure that has been growing by approximately 27 percent annually since 2015, according to Ukraine's State Fiscal Service. In 2018, this figure is projected to reach 10 million hryvnias ($357 million). 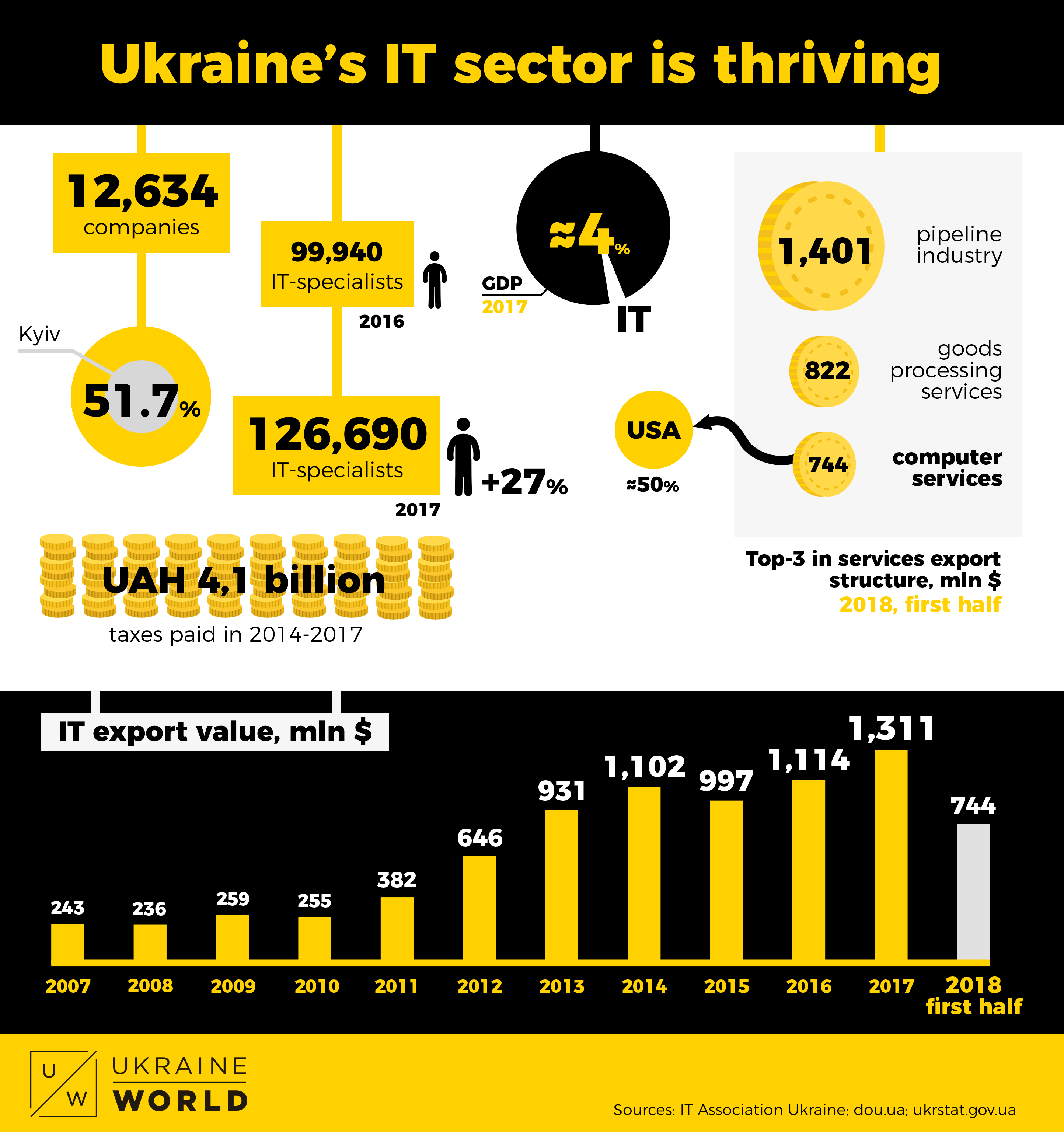 Numerous leaders in the world IT market—GlobalLogic, Microsoft, DataArt, Ubisoft and many others—have offices in Ukraine. And they aren't all centered in Kyiv; many have also opened regional offices.

What is the reason for this continuous growth? The answer can be found by looking at the country's business environment, human resources, and infrastructure capabilities.

The state of the IT business environment

Ukraine's IT sector has not been hampered by excessive regulation. "[An] absence of regulatory pressure on the IT sphere adds to its growth and competitiveness," the IT Ukraine Association and Better Regulation Delivery Office (BRDO) reports.

Even though Ukraine is at 71st place in the World Bank's Doing Business 2019 report, Ukraine's tax policy makes the country lucrative for international IT companies. Ukrainian tax legislation allows companies to work with self-employed specialists who pay only a single tax—5 percent of their income—and a monthly unified social tax, which is 22 percent of the minimum wage, or 819 hryvnias ($31). This allows both companies and IT specialists to maximize their income.

"We think that the business climate in Ukraine has become more predictable in the past few years," says Igor Byeda, the Head of Central Eastern Europe (CEE) at GlobalLogic. "IT…achieved some important changes in the industry in 2018."

First, the registration of private entrepreneurs who are non-residents of Ukraine has become simpler. "This simplifies the cooperation between Ukrainian IT companies and foreign tech professionals," Byeda noted.

Second, the process of importing prototypes for R&D purposes has been simplified. Byeda argues that "this accelerates the procedure for importing engineering samples, which are used in digital product development for international clients."

Finally, a memorandum of cooperation between Ukraine's IT Association and the Ministry of Education and Science of Ukraine has been signed, which means both sides will work to enhance a technology-based educational environment. For instance, IT Association experts will create an electronic educational platform for schools and universities and develop electronic textbooks. In return, IT companies will receive higher quality young specialists.

This lack of investment is not the only problem facing startups. At the initial stage, domestic sources of financing are helpful. However, the average interest rate for business loans in Ukraine is around 25 percent, a remarkably high rate.

That's why many Ukrainian startups seek funds from abroad. Petcube, which created interactive pet cameras, has raised $14 million in seed, venture, and Series A financing, as well as $500,000 from two Kickstarter campaigns. It is currently one of the most successful Ukrainian startups.

The state of human resources

Ukrainian IT engineers earn far above the average level in Ukraine. Their average salary is $2,095 per month, seven or eight times higher than the average salary. That is why the industry attracts many new workers.

As of 2017, 94,000 self-employed IT-specialists were registered in Ukraine, while 46,000 were employed at IT companies; this is a 27 percent increase from 2016. The total number of IT specialists has since grown and is now close to 150,000, according to some estimates.

Ukraine still has room for improvement in tech education. According to QS World University Rankings 2019, only one Ukrainian university is in the top 500 globally: V. N. Karazin Kharkiv National University sits at number 471. In fact, most Ukrainian IT specialists are self-educated, since university programs are often behind.

Another problem is brain drain: 9.6 percent of Ukrainian IT engineers moved abroad in 2015, while it was only 3.8 percent in 2017. Nevertheless, more than 22 percent of Ukrianian IT specialists think about moving abroad.

The state of the ecosystem

IT sectors thrive in environments where universities, government, corporations, service providers, and venture capital interact with each other. These components make up the IT ecosystem, as defined by the Global Competitiveness Index (GCI). Ukraine's IT sphere is just starting to build this kind of ecosystem.

Ukraine's tech ecosystem has been developing mostly through IT-clusters—small networks of connected businesses, suppliers, and associates—as well as through IT parks, locations where infrastructure and cooperation enable high technology and innovative businesses. 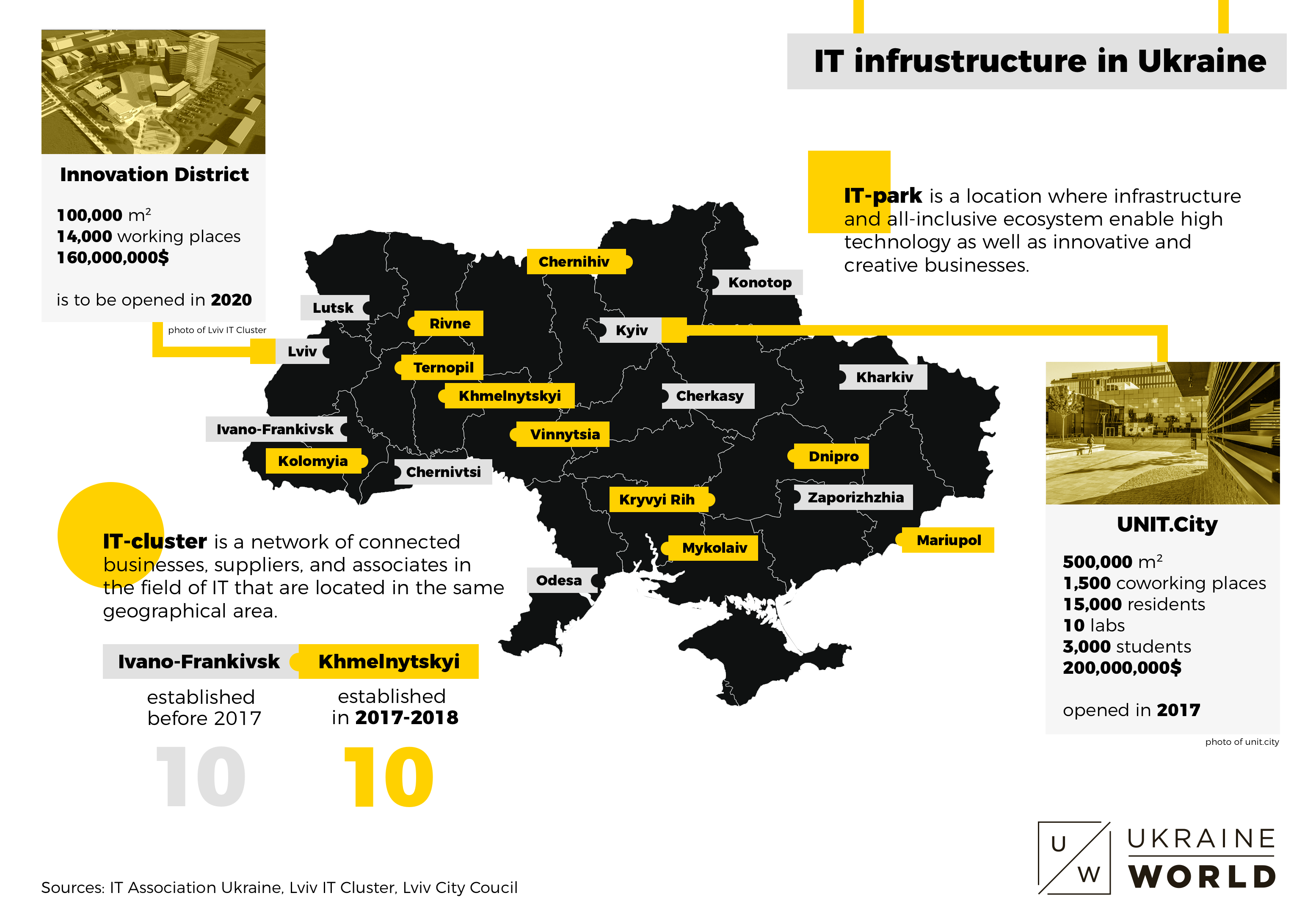 UNIT.City, an innovation park located in Kyiv, is an example of how this works. UFuture Investment Group, which is owned by Ukrainian entrepreneur Vasyl Khmelnytsky, has transformed an abandoned factory into a high tech space for companies, startups, students, professionals, and research laboratories.

Ukraine also has several business associations, including the IТ Ukraine Association. To date, it has assembled fifty-eight software development companies, which collectively account for 50 percent of the total revenue of the industry in Ukraine. Its goal is to represent the interests of member companies in international industry associations and organizations, as well as to facilitate the sustainable development of IT in Ukraine.

The state of competitiveness

Ukraine is more and more competitive globally. According to the 2018 Global Innovation Index, it has climbed to 43rd place, a jump of twenty-one spots since 2015. And eighteen Ukrainian companies made the 2018 Global Outsourcing 100. 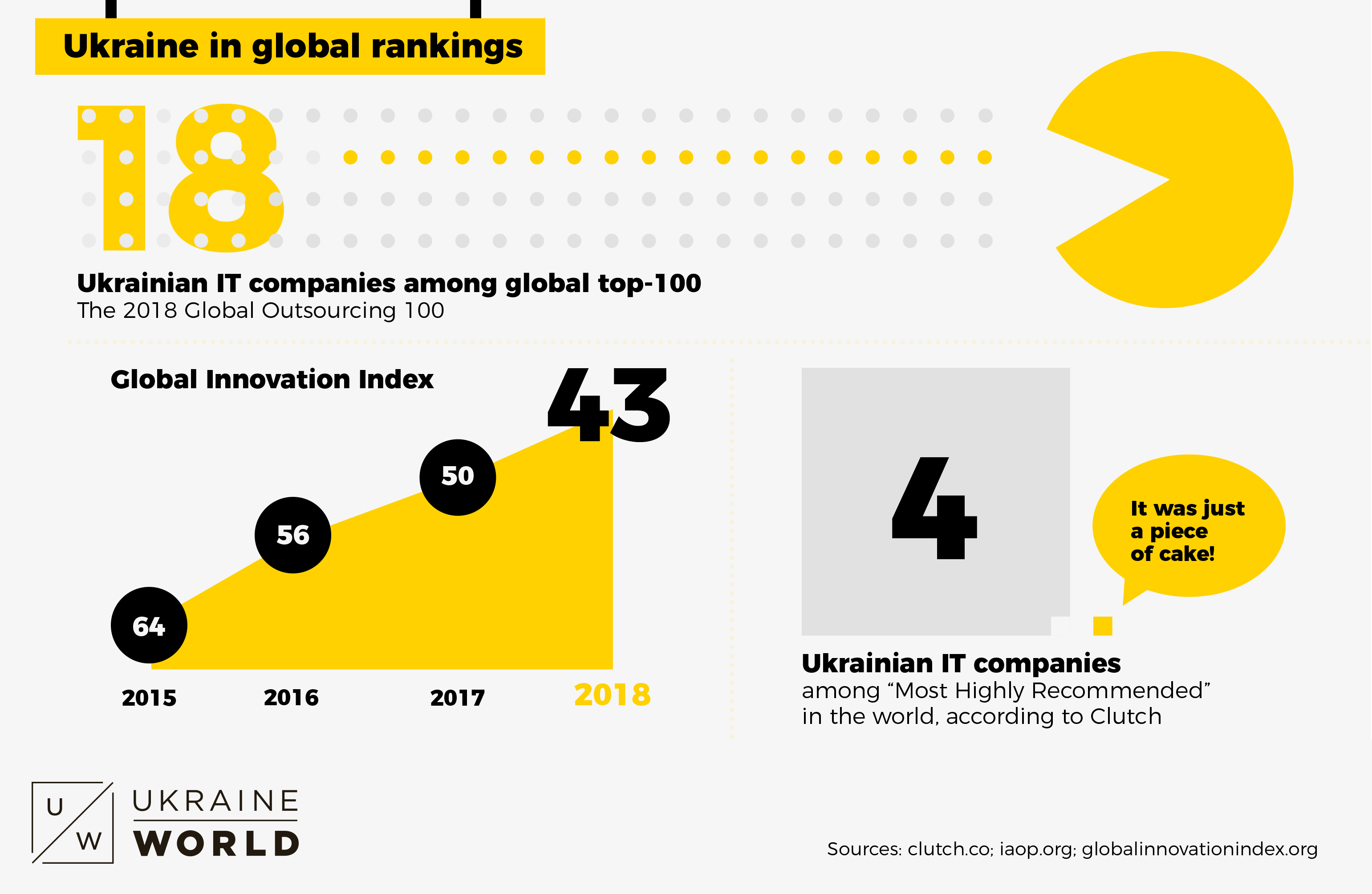 The future of Ukraine's IT sector likely lies in global cooperation, not competition. Byeda emphasized that IT projects are becoming more and more complex, and that "their successful accomplishment goes beyond a single engineering center." The spike in international IT-cooperation could be an opportunity for Ukraine's IT sphere to grow beyond outsourcing and put out more of its own projects.

Ukraine's EU integration, which includes coordinating the EU digital union, would further aid Ukraine's incorporation into the global IT market. However, the main thing to do is to further improve the overall business climate and provide every benefit for startups. Without these steps, the sustainable development of Ukraine's IT sphere won't be achievable.

With VK, a Russian social network, finding itself the subject of sanctions in Ukraine, its pro-Russian users are flooding Ukraine-related discussions with hate speech.
PODCAST
April 18, 2019