Ukraine Has Its Seven Wonders Too

June 24, 2019
Recently, the main nationalist parties, Svoboda, National Corps, Right Sector and three smaller parties, said they would run together in the Parliamentary election on 21 July. 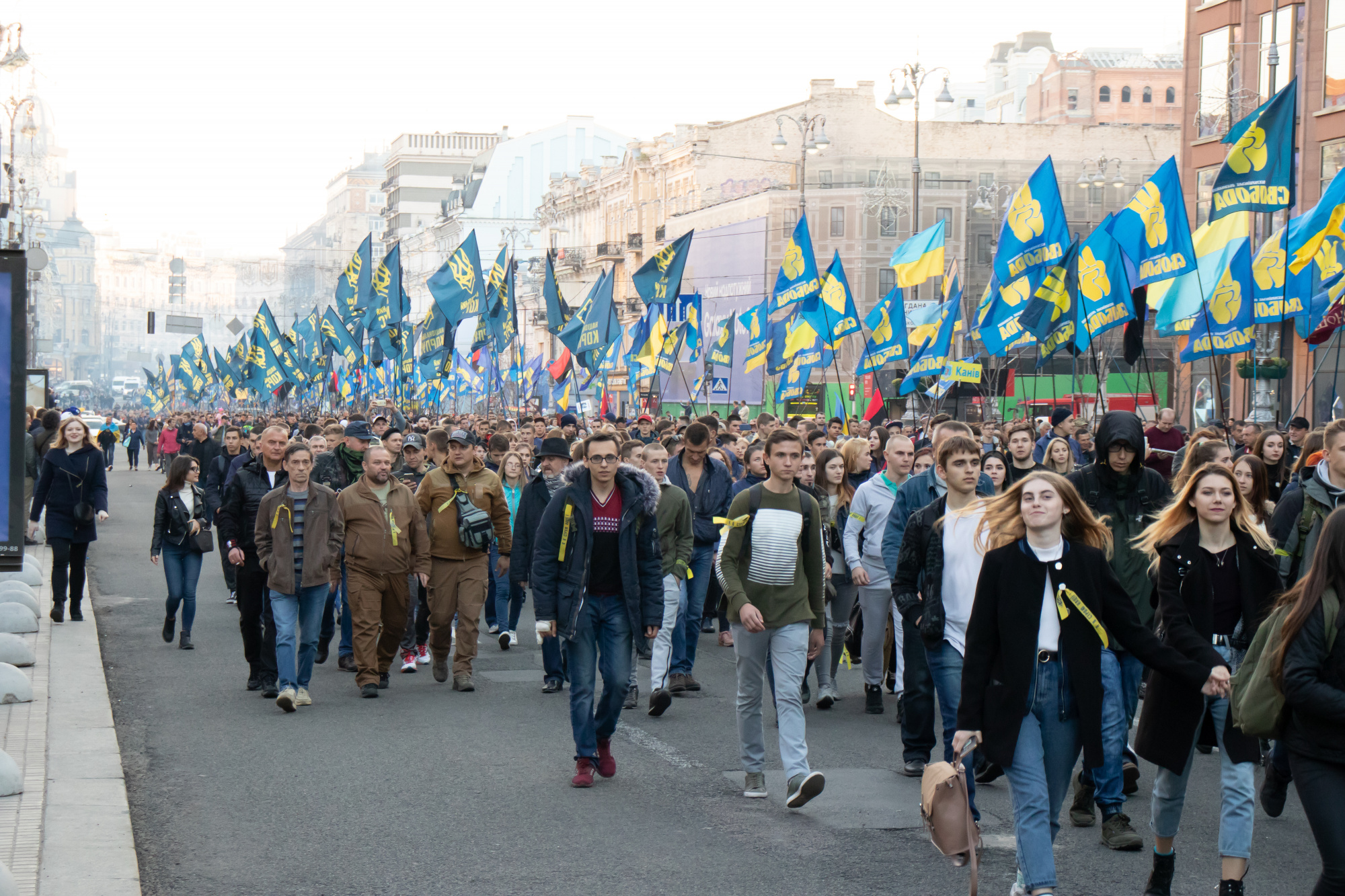 Unlike many other countries in Europe, nationalist and far-right parties in Ukraine have weak electoral positions. At the previous Parliamentary election in 2014, two nationalist parties, Svoboda and Right Sector, together gained 6.5% (4.7% by Svoboda, 1.8% by Right Sector). At the 2019 presidential election, nationalist candidate Ruslan Koshulynskyi, who was supported by a few other nationalists politicians, gained only 1.62% (just over 300,000 votes). For a country which is the target of foreign (Russian) aggression and in which patriotic slogans and feelings play an important role, this weakness deserves attention.

Despite this electoral weakness, nationalist parties are actively present in Ukrainian political and social life. They act decisively when the authorities are not capable of solving a problem. Despite their weak electoral positions, they have the capacity to mobilize supporters, which makes them a factor in Ukrainian politics.

UkraineWorld decided to look at their programs to get a better understanding of what they want to achieve.

According to the last opinion polls, National Corps has only 0.3% support, but it is a well-known party because of its controversial reputation. National Corps is probably the best-presented party on the streets. One year ago it created the militia organization National Druzhyny, with around 600 members to patrol Kyiv. As proof of their capability they very rudely demolished a Roma camp in Kyiv's Holosiyivskiy Park. From time to time they organize raids on illegal gambling establishments and so on. "When the police don't act, the National Druzhyny takes control of the situation," the militia wrote.

The most emphasized topics in their program are Security, A New European Unity, and traditional family values.

Security."Ukraine has to have a nuclear weapon" is one of the party's slogans. The party proclaims "Ukraine was robbed in Budapest [1994 Budapest Memorandum on Security Assurances for Ukraine, as a result of which Ukraine gave up the third largest nuclear weapons stockpile], and was betrayed in Minsk [Minsk agreements designed to end the armed conflict in Eastern Ukraine] that's why the country needs to build its own security, and a nuclear weapon is the way to do this".

One of the top issues of the European Union's agenda – immigration policy - is a priority of the party's program, just like it is for other far-right parties. They want to change the procedure, make it easier to deport illegal immigrants and introduce annual quotas for skilled foreigners.

Geopolitics. Nationalists see strengthening Ukraine's geopolitical position through the building of a commonwealth of countries located in the geopolitical space that connects the Baltic Sea and the Black Sea. "I want a country that will be the center of attraction. Geopolitically, I see it in the Baltic-Black Sea bloc. Ukraine will be a bastion of conservative values ​​for Europe and for a European national idea" – Andriy Biletskyi, leader of the National Corps, said in the Naspravdi program.

The National Corps stands against the propaganda of LGBTQ, including Pride parades. Instead, they regard support of traditional values and increasing the social standing of mothers as crucial for the Ukrainian nation. In so doing, they recognize the traditional nuclear family as marriage between a man and a woman.

Biletskyi explains nationalism itself as a sense of community.Whoever meets the minimum criteria of Ukrainian identity, and is ready to shed blood for Ukraine is welcomed, no matter the origin. Unlike Svoboda, National Corps is less concerned about language and have a position which is common to the majority of Ukrainian parties. "The Ukrainian language needs maximum support and development, and it should be the only state language, but it's an absurd statement [to make] that language is the only marker of patriotism or nationality," said Biletskyi in an interview with Gordon. Interestingly enough, Biletskyi himself was born into a Russian-speaking family.

Language, Presidential Republic, and traditional family values seem to be the most important issues for Svoboda.

Security. Unlike the National Corps and Right Sector, Svoboda puts more onus on internal threats for Ukraine than on external ones. Hence, they want to prohibit the activities of all anti-Ukrainian political parties and non-governmental organizations. The party intends to instigate criminal liability for any manifestations of Ukrainophobia. In order to do so, the plan is to create a separate section of the Criminal Code of Ukraine called "Crimes Against the Ukrainian Nation". This is supposed to increase criminal responsibility for actions and inaction in violation of territorial integrity, for the manifestation of separatism and abuse of state symbols.

Svoboda wants a Presidential Republic."The role of Parliament is leveled, it's a place for statements, not decisions," Andriy Illienko, one of the party's leader, said on the air of 112 Ukraine. They suggest a draft Constitution of Ukraine, according to which the Ukrainian state is a presidential republic, the President of Ukraine is the head of state and directly heads the Government and Armed Forces.

The party wants to satisfy ethnic minorities through the draft law on proportional representation in the executive authorities of Ukrainians and representatives of ethnic minorities. But this issue is unlikely to meet mutual agreement among the newly- established union of nationalist parties.

Svoboda does focus on traditional family values, like other nationalists do. The party's program sets the goal of encouraging families to give birth to a child. A family with three or more children should receive compensation for purchasing accommodation and even free accommodation for families with five or more children. Their attitude toward LGBTQ is not as radical as the National Corps's position, but they want to keep the status quo without giving LGBTQ the rights they want. As one of the party's leaders, Ruslan Koshulynskyi said, a same-sex family is not defined by the Family Code of Ukraine, ao their marriage should be understood as a union between a man and woman.

The Party is most concerned about the national idea, non-aligned status, and traditional family values.

The program of the Right Sector contains a lot of similarities to the 1941 program of the Organisation of Ukrainian Nationalists. First of all, they want the state's ideology to be based on the national idea and anchored at constitutional level. The party is going to use history in order to unite all citizens and create the same identity, that's why their program starts from references to Ukrainian History and nationalist heroes. Moreover, they use the same flag which was used by the Ukrainian Insurgent Army. As other nationalist parties all around Europe, Right Sector gives a great deal of attention to the issue of uncontrolled migration. They say it destroys the identity of Europe and tomorrow could ruin Ukraine's identity.

Right Sector has a common point with Svoboda around language. They want to use language as a tool in the identity-building process, and so ensure the development of the Ukrainian language as the single state language, its full functioning in all spheres of public life.

Foreign policy. Dissimilar to National Corps, which wants to build a new European Unity, Right Sector has stated clearly that they don't see Ukraine as a member of any supranational organization, especially the EU. The party considers the EU as neocolonial enslavement which leads to national degradation. Thus, Ukraine needs to have non-aligned status and focus on partnership and alliance with neighboring countries.

Traditional family values seem to be the topic which unites all nationalist and far-right parties. Right Sector is noexception. As follows, they stand for the propagation of the sanctity of marriage between a man and a women, and the role of maternity. The party fights against gender policy and sexual perversion in order to defend traditional family values. "The propaganda of the LGBTQ kills the soul, and that's much worse than killing the body. We say that it is evil. This is our principled position. Neoliberalism, which is fooled from the West, is the worst evil", said the Head of the Political Party, Andriy Tarasenko.

Conclusion. A new European Unity, support for the Ukrainian Language and Family values are the crucial points in the political programs of the newly-united nationalists. It's clear that they don't support the current path of integration between Ukraine, the EU and NATO, and offer their own alternative. But despite their unification, the overall rating shown in opinion polls is no more than 2% support. The current minimum to enter The Verkhovna Rada (Ukrainian Parliament) is 5% of the vote, so it will be hard for them to get the required barrier. In the event of them not getting into Parliament, it is very likely that their union would fall apart.

President Zelensky's party "Servant of the People" failed to curb the power of local mayors in Ukrainian local elections on October 25th. Why did this happen, what...
InfoWatch
November 3, 2020

Social media continues to be one of the main sources of information in Ukraine, and it is actively used by many political forces. Parties and individual politicians...