June 25, 2019
June has been challenging month to keep up with Ukraine’s vibrant politics. Numerous new political parties—Servant of the People, Holos, Might and Honor, Ukrainian Strategy, and others—held party conventions and presented their candidates and programs for snap parliamentary elections slated for July 21. 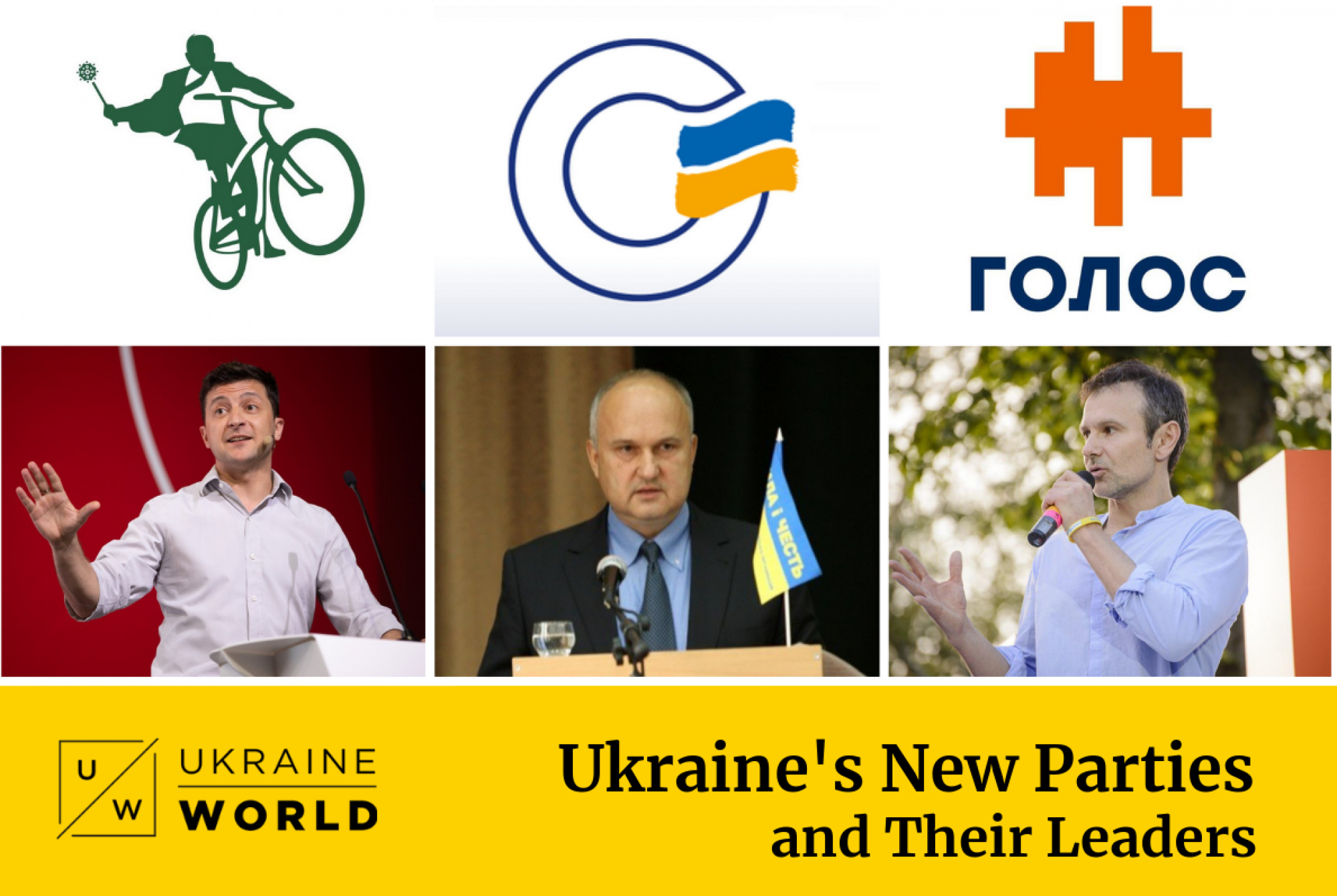 Let's take a look at the three most important newcomers to the race.

Servant of the People

Named after the hit television series in which Ukraine's new President Volodymyr Zelenskyy played a teacher turned president, the party's campaign is a prolongation of Zelenskyy's presidential campaign.

The party's campaign is a prolongation of Zelenskyy's presidential campaign.

Its slogan---"let's do them together" (a hint on ordinary citizens opposing seasoned politicians)---is aimed at satisfying the public's desire for new faces in politics. The party's program consists of sixteen ideas to "turn Ukraine into a free, independent, and successful dream land."

Oleksandr Korniyenko, the head of the party's campaign, said the party list is made up of experts who advised Zelenskyy during his presidential campaign, the heads of the regional Ze!Teams, and influential people. However, there are also people from Kolomoisky's team included. Oleksandr Tkachenko, the director general of the 1+1 media group owned by Kolomoisky, is ninth on the party list. The party has also announced its candidates in majority constituencies; it is a mix of people from regional Ze!Teams, UKROP, a party supported by Kolomoisky, and local businesspeople. Some controversial candidates, like blogger Maksym Buzhanskyi who opposes the Maidan and has nostalgia for the USSR, are candidates.

Some Ukrainian media claimed that Servant of the People was selling places on the party list for $2 million and places in majority constituencies for $300,000. However, no proof was provided, and Korniyenko denied the allegations.

Servant of the People also introduced a "post-primary" check, which means that people can send proof that a person on the party list has a shady past and they would then be excluded. So far, five people have been kick off.

The party has a real shot at controlling the Verkhovna Rada and the next Cabinet of Ministers, including the selection of the prime minister.

According to the latest Rating poll, Servant of the People gets 47.1 percent support among decided voters. This would give Zelenskyy's party 135 places in the next Rada. While 226 MPs are necessary for a majority, it is likely that Servant of the People will win at least 91 places in majority constituencies, making them the party in power.

Ukrainian rockstar Sviatoslav Vakarchuk was expected to run for president but he backed out at the last minute. Instead, in May 2019, he unveiled a new party---Holos (The Voice)---that puts a premium on people.

"We want to build a society in which a person would be the main value," the party program reads.

The party list is an interesting mix of experts, reformers with government experience, civil society activists, and businesspeople. For instance, Kira Rudik, the COO of the home security start-up Ring which was acquired by Amazon for $1 billion, is #3 on the list. Oleksandra Ustinova, formerly an activist with the Anti-Corruption Action Center, and Yaroslav Yurchyshyn, the former head of Transparency International-Ukraine, are #5 and #7 respectively.

The party's top candidates will visit 300 small towns across the country to rally young people. Overall, the party depends on the popularity of Vakarchuk and his band Okean Elzy, the most beloved rock band in Ukraine.

According to the latest Rating poll, Holos gets 8.1 percent of the vote among decided voters, which would give the party 23 seats in next the Verkhovna Rada.

Headed Ihor Smeshko, the head of Ukraine's Security Service (2003-2005) and an advisor to former President Petro Poroshenko, the party is hardly new. While it participated in the 2014 parliamentary elections, it received less than 1 percent and went virtually unnoticed. Now the situation is different.

The party polls around 5 percent and has a real shot at making it to the Rada.

Smeshko is popular now. In the first round of the 2019 presidential election, he received 6 percent, with almost no TV presence and or billboards. He campaigned through the internet, namely on his YouTube channel. Dmytro Gordon, a Ukrainian journalist popular with the forty plus crowd, deserves a great deal of the credit. Gordon urged his audience to vote for Smeshko in the presidential race and become the head of the party's campaign in May.

Gordon hopes for 10-18 percent and participation in a future governing coalition. According to Gordon, the electoral strategy of Might and Honor will be similar to Smeshko's presidential campaign, relying on the internet and influencers, rather than traditional media.

Might and Honor is being positioned as an alternative to Servant of the People and Holos. While these two parties promise to bring fresh faces to politics, Might and Honor includes seasoned professionals. Among the first ten candidates on the party list, three were formerly connected with Samopomich, the Lviv-based political party, including businessman Ihor Miroshnychenko and Olena Sotnyk.

According to the program, the party's main goal is to build a strong middle class. The program also promises deoligarchization, to fight corruption, and decrease utility tariffs.

Among the new parties, Servant of the People, Golos, and Might and Honor have the best chance to make it to the Verkhovna Rada and be represented in a new government.

However, there are many more new political forces running for the parliament. Prime Minister Volodymyr Groisman's Ukrainian Strategy and Mikheil Saakashvili's Movement of New Forces are two examples.

All of these "new faces" hope to take advantage of the mood of voters who are fed up with the old political system and desperate for positive change. On July 21 we will see which new parties succeed.

True or False: What Chernobyl Liquidators Think about the HBO TV Series

UkraineWorld takes a snapshot of 2020 in Ukraine, analyzing key events and trends of the year in politics, the economy and society.