August 1, 2019
On July 12, an Italian court sentenced former Ukrainian National Guard soldier Vitaliy Markiv to twenty-four years in prison for his role in the murder of Italian photographer Andrea Rocchelli in Ukraine in 2014. This is the first time a Ukrainian soldier with dual Italian and Ukrainian citizenship has been tried and sentenced abroad for his alleged actions during the conflict in eastern Ukraine. Despite the novelty of the case, hardly any major media covered it. 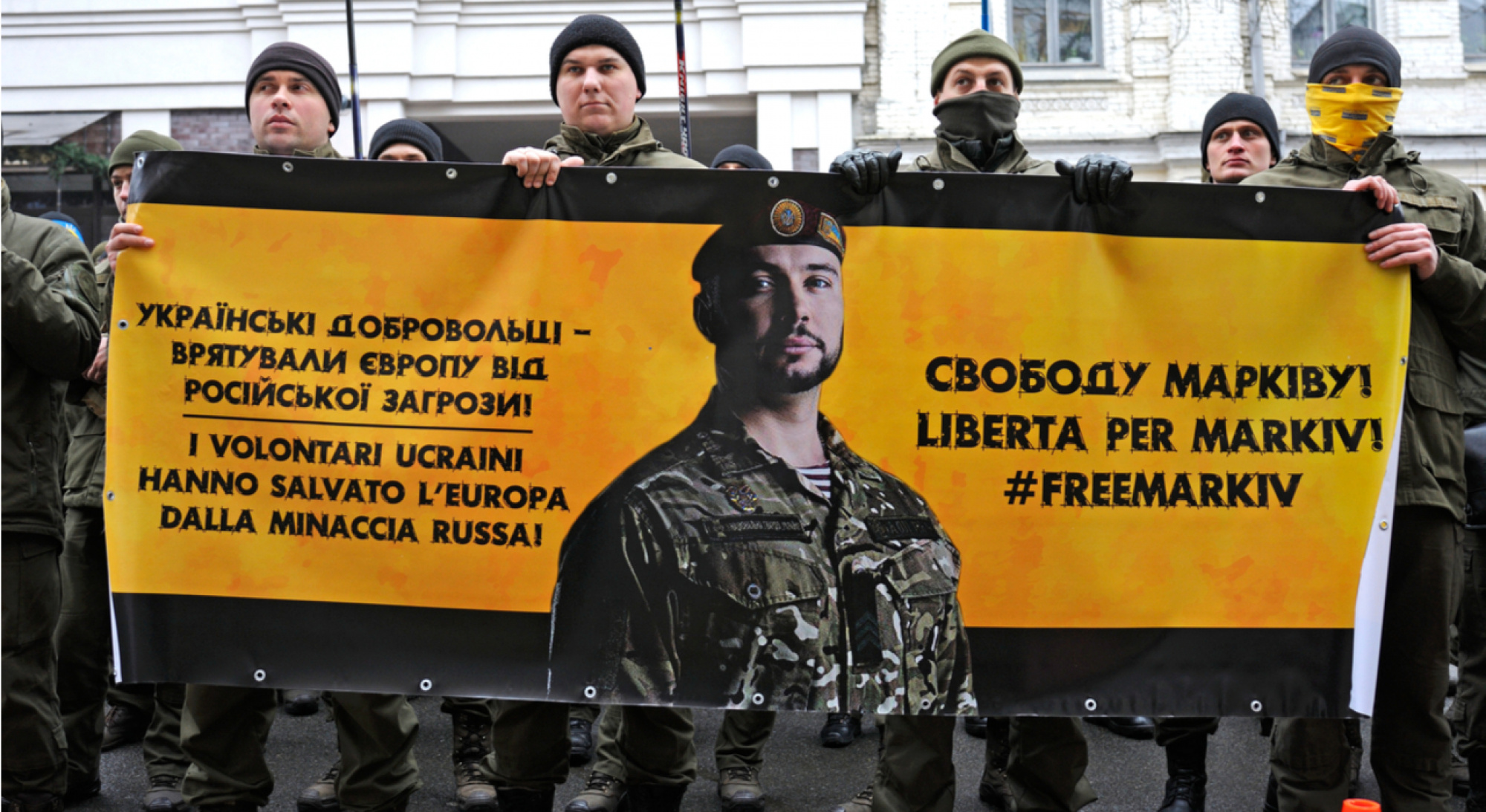 But they should. The case sets a dangerous precedent. Russian propaganda uses Markiv's conviction by an independent court in Western Europe as an example to confirm the lie that the Ukraine army commits crimes. Misinformation, disinformation, and outright fakes played a role in assembling the case, which should be seen as another chapter in Russia's hybrid war against Ukraine. Only this time, it was fought on Italian soil.

"I have never seen such an absurd sentence in fifty-six years of my career," Raffaele della Valle said. An experienced lawyer who represents Vitaliy Markiv, Della Valle believes the sentence is politically motivated.

What the case was about

Markiv was arrested in June 2017 and charged with complicity in the premeditated murder of Italian photographer Andrea Rocchelli in May 2014. Rocchelli, along with his Russian translator Andrei Mironov, died near Slovyansk in the then separatist-controlled territory, hit by mortar fire. Another journalist, William Roguelon, survived the attack and became the key witness in court.

Markiv, who served in the National Guard, was on Mount Karachun overlooking Slovyansk at the time. According to the prosecution, he provided the Ukrainian military with information about the whereabouts of the journalists, who allegedly proceeded to fire at them from mortars.

Markiv's role, according to the prosecution, was key to the death of Rocchelli and Mironov. The jury believed this absurd version of events and sentenced him to twenty-four years. Such a harsh sentence shocked not only his relatives and the Ukrainian community in Italy, but also fellow journalists who were in the Donbas at the time.

Some of these journalists express doubt about the judges' understanding of the situation in Ukraine: indeed, it was a full-fledged war and the spot was the hottest and most dangerous at the time where no other journalists dared to go. Moreover, Rocchelli and Mironov weren't wearing clothing marked "press" or bulletproof vests; they wore civilian clothes, as many separatist fighters did in the early stages of war.

No evidence was presented in court that the Ukrainian army shot at the journalists and that Markiv somehow called in their location. Incredibly, the Italian side decided not to conduct an investigation in Ukraine, relying instead on satellite images and photos. The accusation were based on the testimony of two witnesses: French photographer William Roguelon, the survivor of the attack, and freelance journalist Ilaria Morani, whose article in Italy's Corriere della Sera newspaper laid the groundwork for Markiv's arrest.

However, there are strong doubts about their credibility.

Roguelon changed his account several times. In 2014, he told French police that he thought the Ukrainian army shot in the journalists' direction, but he couldn't say for sure; in 2017, he said with confidence that it indeed was the Ukrainian army, although he himself did not see a single Ukrainian soldier.

Roguelon's colleagues, who worked in the Donbas in May 2014, recall that he had little experience in conflict zones and knew next to nothing about Ukraine. He spoke neither Russian nor English. Olya Morvan, Roguelon's colleague from the Wostok Press agency, remembers Roguelon calling her after Rocchelli's and Mironov's death completely disoriented, telling her that they were being shot at from every direction.

Another colleague, French journalist Paul Gogo tried to dissuade Roguelon from going to that spot which was the hottest at the time (The Italian Embassy in Kyiv warned its citizens against visiting those areas.). "In the evening, he called me in a panic, frightened, saying 'They are all dead, I might die too.' I tried to reassure him. I asked, Where are you? With whom? What is their nationality? What happened? He could not answer where he was. He said that he was with his Italian colleague who had been killed. He was in panic and quickly hung up ... In a few hours, I saw Roguelon on a Russian propaganda channel. He was hospitalized, wounded, and saying that he was shot at by the Ukrainian army," Gogo told Hromadske TV.

Roguelon's testimony, while implicating the Ukrainian military in the death of journalists, didn't provide any links to Markiv. Accusations against him are based solely on one article by freelance journalist Ilaria Morani. She quotes Markiv (without citing his name): "We don't usually shoot in the direction of the city or at civilians, but when we see movement, we load the heavy artillery. This is what happened with the car of two journalists and an interpreter." These words were interpreted by prosecutors as a confession. Markiv denies he said it was the Ukrainian army who shot and insists he only found out about the reporters' death from his call with journalists. There is no recording of the conversation, so the prosecution has fully relied on the journalist's testimony.

The credibility of Morani's article and quote is highly suspect. During the trial, it was revealed that Morani never spoke to Markiv personally; instead, she "transcribed" the conversation between him and another journalist Marcello Fauci, while listening to it on loudspeaker. In court, Fauci couldn't confirm that Markiv mentioned Rocchelli's death in that conversation. In Morani's article, there are several important errors: she calls Markiv a captain in the Ukrainian army, while he was just an ordinary soldier, and she says he was coordinating the defense of Slovyansk, which he was not. Under normal circumstances, this level of sloppiness would raise serious questions about a journalist's professionalism. Moreover, Morani and Fauci gave different testimonies on date, location, and language of the conversation, which, in addition to information from other sources, leads one to wonder whether Morani was present during the call between Fauci and Markiv. Perhaps she relied on Fauci's oral account and later exaggerated its content in her article in order to sell a scoop.

Markiv's sentence was based on speculation, not fact. It seems like he just happened to be in the wrong place at the wrong time, and spoke to the wrong person. Due to his Italian citizenship and his comments to the Italian media, he was an easy target for the Italian police to arrest and prosecute, bowing to pressure from society and journalists' organizations to nail someone for Rocchelli's death.

Another chapter in Russia's hybrid war

While there is no evidence of direct Russian influence on the decision of the Italian court, there are some worrying facts which illustrate a general pervasiveness of Russian propaganda in Italy and the climate in which this sentence was pronounced.

First, many passages in the prosecutor's account of events seem to echo Russian propaganda. They called Markiv "an irregular militant," presented the Ukrainian army as chaotic and incompetent, and blamed Ukraine for being uncooperative and unwilling to investigate Rocchelli's death (which is partly true - Ukraine failed to investigate back in 2014, but sent numerous requests for a joint investigation after Markiv's arrest, which were ignored by Italy). These arguments were repeated during the trial. Prosecutors also presented articles taken from Russian propaganda and separatist websites as evidence in court.

Second, the depiction of the case in the Italian media was blatantly one-sided. Immediately after Markiv's arrest in 2017, major Italian newspapers and TV stations called him "the killer," ignoring the time-honored presumption of innocence. During the trial, articles in the Italian press groundlessly portrayed members of the Ukrainian community present in the court as far-right supporters, and wrote that the slogan "Glory to Ukraine," which Markiv used, is a neo-Nazi salute. In many cases, the media only wrote about the prosecution's position. This manipulated public opinion toward perceiving Ukrainians as dangerous far-right militants and Markiv as a merciless assassin. It also landed on fertile soil, as Russian propaganda spinned its description of the conflict in the Donbas as a "civil war," Ukraine as a country "governed by Nazis," and the Maidan protests as a coup d'etat. This skewed representation of reality might have had an impact on the jury.

Third, Russian propaganda used this case against Ukraine by promoting disinformation in Italy and abroad. Oksana Chelysheva, a friend of the late translator Andrei Mironov, and a Russian journalist who used to be critical of Putin regime but since 2014 has taken a strong pro-separatist and anti-Ukrainian stance, was in close contact with the Rocchelli family. Chelysheva has many contacts with separatists in the Donbas and calls Zakhar Prilepin, a Russian writer who fought in the Donbas on the pro-Russian side, a friend. She says that in 2015 she conducted her own investigation of Rocchelli's and Mironov's death and transferred her findings to Italy. Later she participated in several events in Finland, Belgium, and Italy, where she explicitly blamed the Ukrainian army for attacking civilians and journalists, without mentioning the crimes of Russia and its proxies in the Donbas. After the Markiv trial began, she took part in a roundtable in Milan in December 2018. At the roundtable, panelists stated that Ukraine deliberately attacks journalists and Rocchelli was a victim of such an attack. The vice president of the Foreign Affairs Commission of the Italian Parliament and MP Paolo Grimoldi attended.

Finally, the Ukrainian community which is one the largest groups in Italy recently experienced several attacks from the local press and politicians. On July 16, Vice Primer Minister and Interior Minister Matteo Salvini accused an unidentified Ukrainian neo-Nazi group of plotting to kill him. Neither police nor the prosecutor's office confirmed the charge. It looks like Ukrainians are becoming scapegoats in Italy, and the main one now is Vitaliy Markiv.

This article was first published at the Atlantic Council

Since Russia annexed Crimea in 2014, Moscow and its proxies have put dozens of Ukrainian and Crimean Tatar political prisoners behind bars. However, there are many...
PODCAST
August 12, 2019