March 13, 2019
The Ukrainian Cossack has come to symbolize Ukraine’s ethnic image, much like the medieval knight of Western Europe or the Samurai of Japan. In fact, only a minority of Ukrainians belonged to this famed social group – but their influence on history, culture, and the psychology of the country was deeply profound. If you know the history of the Cossacks, you won’t be surprised to find that Ukrainians, who seem quiet and humble at first sight, can go to protest on Maidan and become courageous warriors. 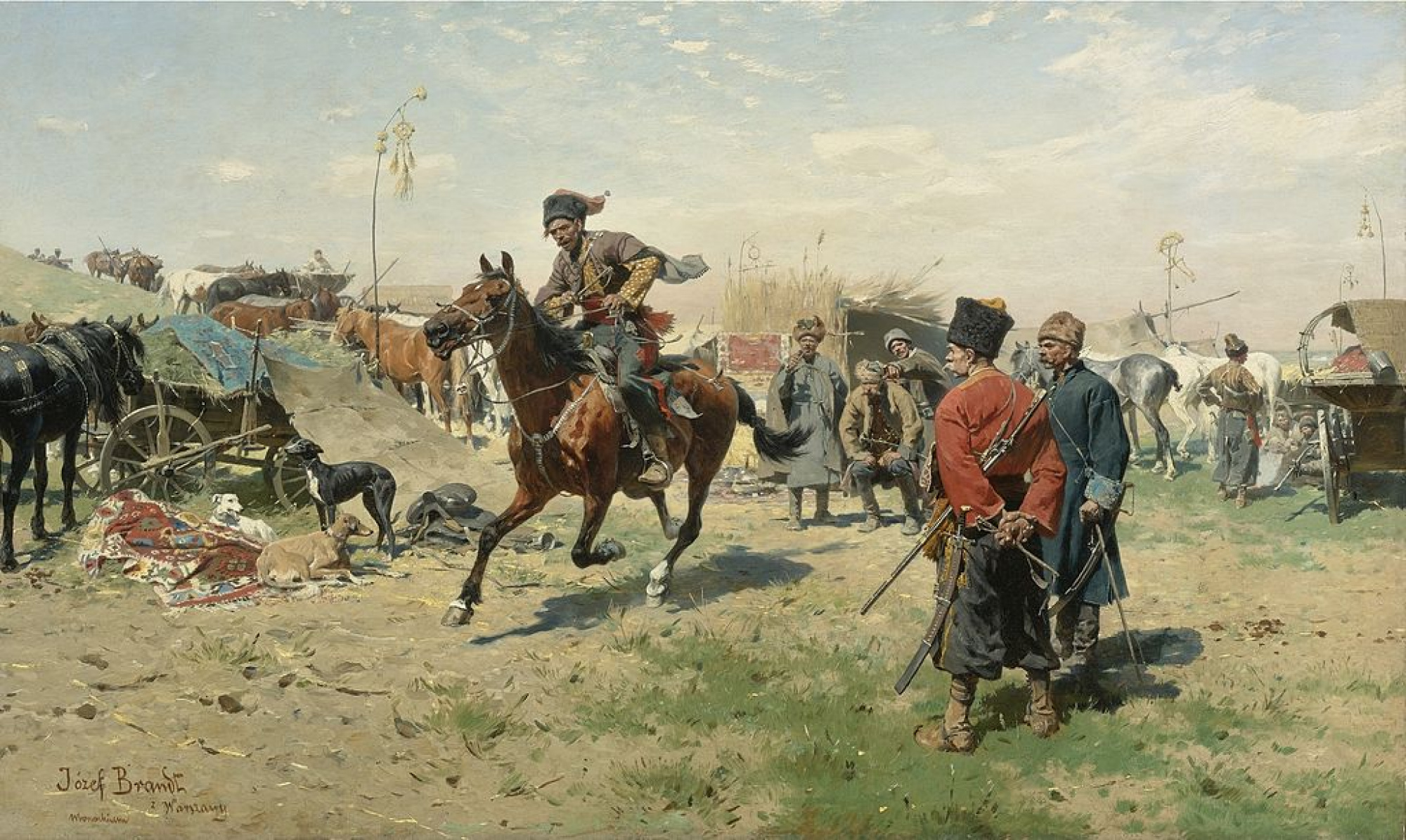 Historical sources tell us that the Ukrainian Cossacks came from a variety of nationalities and social groups. Their ancestors came from Ukrainian, Russian, Polish, and Tatar territories, and migrated at great risk to the southern steppes to hunt, fish, gather honey, and make handicraft goods.

The first references of the Cossacks appear at the end of the 15th century, and their fame spread throughout Europe over the next hundred years. Their raids and robberies intimidated Turkey, and their support of Poland in campaigns against the Muscovites shook the throne of Moscow.

At the beginning of the 16th century, Christian believing European governors considered the Cossacks to be crucial allies in their war against the Ottoman Empire. In 1621, Lithuanian-Polish troops battled the Ottoman Empire at Khotyn. There, Cossack troops, headed by Hetman Petro Sahaidachny, joined Polish-Lithuanian forces and they stopped the Turkish army at its borders.

After that, the Zaporozhian Cossacks began to impose increasingly big social requirements on the Commonwealth. The reaction of the Poles did not satisfy the Cossacks, so they raised a rebellion under the leadership of Hetman Bohdan Khmelnytsky. It ended with the creation of Cossack autonomy.

Ukrainian Cossacks gained their independence in 1649. That year, as a result of the Zboriv agreements between the leaders of the Rzeczpospolita and Cossack hetman Bohdan Khmelnytsky, it was formed as part of the Kyiv, Chernihiv, and Bratslav regions (called "voivodeships", areas administered by a voivode orgovernor) to the east of the Sluch River.

It was the Cossacks who spread and popularized the term "Ukraine", which had not been used in the pre-Cossack era, as the name of their territories.

Historians consider Zaporozhian Cossacks to be the first purely Ukrainian society. As aproto-state nation, it fought for the right to exist, develop, and resist hostile encroachments. The Cossack army created its own, uniquely developed state-administrative structure, which fundamentally different from similar structures of neighboring states. They received foreign ambassadors, concluded international agreements, and so on. However, the titles of the Cossack aristocracy did not have any weight in the eyes of foreign elites.

The laws of the Zaporizhian Sich were rather strict. For theft or killing of one of his congeners, a Cossack could be buried alive with the dead one or beaten to death with batons. This was not particularly humane treatment, but it helped to maintain excellent discipline.

Video of BBC News: "The warrior Cossacks of Ukraine":

Legends say that there were unusual people called "Kharakternyks"among the Cossacks. People believed that they originated from ancient pagan magicians who possessed secret knowledge and were even able to predict the future. Some historians maintain that after the adoption of Christianity in Kyivan Rus, pagan magicians were persecuted and moved to the wild steppe where the Zaporizhian Sich was established later. There, Kharakternyks taught warriors martial arts, rituals, and customs.

Supposedly, the Kharakternyks could neither be burned in fire nor be drowned in water. They were said to speak twelve languages, turn into wolves and other animals, catch bullets and kernels with their hands, walk on water and even breath under water. Legend has it that they lived for a very long time and were extremely strong – and only silver bullets could kill them.

Nowadays, Khortytsia Island , where the Zaporizhian Sich was established, is the largest island on the Dnipro River and is 12.5 kilometers long. It is included in the list of Seven Wonders of Ukraine. The island is integrated into the infrastructure of the city of Zaporizhzhia. You can find a lot of awesome attractions to spend the whole weekend throughout its territory.

Here, the life of Ukrainian Cossacks is recreated to the smallest details. Khortytsia has the unique Museum of the History of Zaporozhian Cossacks. In addition, they created the Historical and Cultural Complex "Zaporizhian Sich". This is a generalized reproduction of the Cossack capital, presenting its main building: the church, the kuren' (house), the office, the military treasury, the school, and the pushkarnia (a place for gunfire).

Panoramic video of the Cossack fortress on Khortytsia Island:

Tourists in Kyiv can also see a recreation of the everyday lives of Cossacksin the "Mamajeva Sloboda" Open Air Museum in Kyiv. This museum is situated seven kilometers from Khreschatyk – the central street of Kyiv. Its thematic exhibits are spread out on 9.2 hectares and present a full replica of a historical settlement showcasing Ukraine's nature, architecture, and way of life. It provides guided tours in English, German, French, and Italian. One can book a private tour called "Ukraine is a Land of Cossacks" on Tripadvisor from $35.

One can also enjoy a weekend in the Cossack village of Marynivka , which is 30km from Odesa. There one can go on a guided 6-hour tour with a German-speaking guide, where tourists can discover the traditional Ukrainian lifestyle and explore the beautiful landscape that surrounds the area. In addition, one can learn interesting things about Cossack traditions, enjoy authentic cuisine, dress in traditional attire, and sing in a Cossack choir. It costs $60 per person.

Another fascinating tour, which is already opened for booking, is called "In the Footsteps of the Cossacks". This is an iconic journey from Bucharest to Kyiv to Zaporizhzhia along the Dnipro River in Ukraine and the Danube River in Romania aboard the ship "Dnipro Princes". It will start in September 2019 and costs from £1,795 per person for 11 nights.

Cossack history, like the entire history of Ukraine, is a valuable part of Europe's cultural heritage.

The Cossack songs of the Sicheslav (former Dnipropetrovsk) Regionwere included in UNESCO's List of Intangible World Cultural Heritage in Need of Urgent Safeguarding.

There is also a database of all the Spanish newspapers of the 17** th **century which mention Ukraine and the Cossacks as well as various military campaigns that took place on the territory of Ukraine. It was created by Ukrainian researcher Oleksandr Scromnitsky. So far, 135 newspapers containing news from Warsaw, Lviv, Vienna, and Istanbul, have been collected. The database currently contains newspapers until 1698, but the author plans to add those published between 1698-1700.You can visit the database of newspapers here.

Modern Ukrainian soldiers who fight in Donbas often copy the forelocks of Cossacks to look like those fearless medieval warriors. After all, the Russian-Ukrainian war is taking place precisely on those territories where the boundary between the Cossacks lands and the Wild Steppe passed in antiquity.

When one searches for the English word "Cossacks," search engines often return news and articles that are related to Russia, not Ukraine. Why does that happen? The answer is that Russia had its own Cossacks ( Kazaks ) in Don, Kuban, Terek, Yaik, Sibir and other territories.

Today, there are Registered Cossacks of the Russian Federation – the Cossack paramilitary formation created on the basis of the Federal Law on December 5, 2005. They have become notorious because of their support of separatism in the Donbas and public beatings of opposition politicians and protesters in Russia.

In Russian law, Cossack groups can assist police in public control. For example, these nationalist paramilitaries had an official role in Russia's World Cup. Then, on May 12, 2018, the Kremlin deployed Russian Cossacks to Moscow to suppress protests against the Russian authorities.

Therefore, it is impossible to imagine the history of Ukraine and Europe without the Ukrainian Cossacks. They have always been free fighters on the European borderland; and their territories were Europe's crossroads with the Muslims and Muscovites.

Ukrainian folk music is getting more and more world attention and recognition. It is multidimensional, so we’d like to tell you all about it!
Ukraine
March 8, 2022

The following is a shortened version of a conversation between Serhii Plokhy and Volodymyr Yermolenko.