June 26, 2020
For centuries, Ukraine’s long struggle for statehood has been mirrored by the often troubled fate of the Ukrainian language. Oppressed and marginalized throughout the Czarist and Soviet eras, Ukrainian finally shed its second-class status in 1991 to become the official state language of newly independent Ukraine. However, the story did not end there. 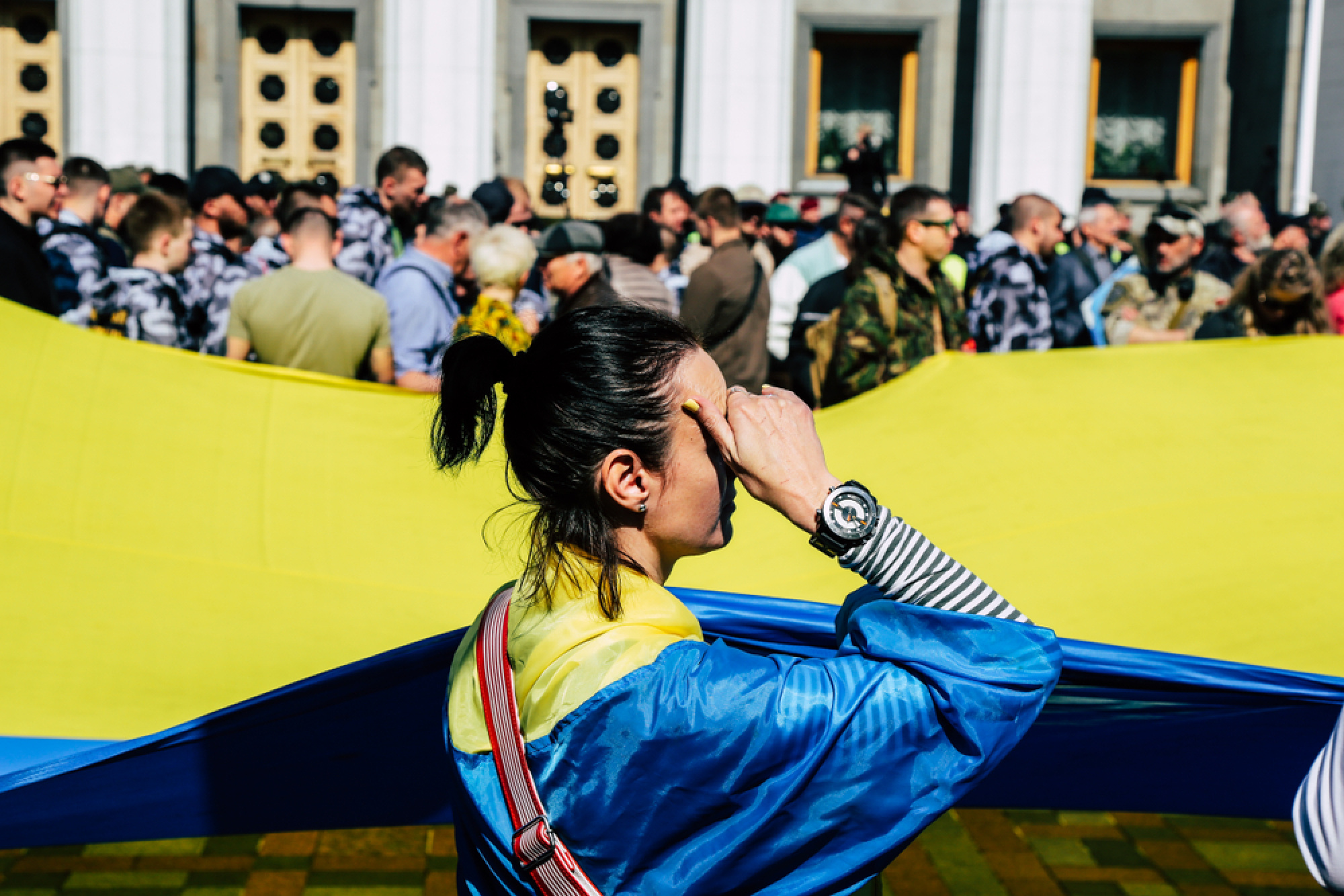 Despite the upgrade of Ukrainian following the collapse of the Soviet Union, the language has continued to play second fiddle to Russian throughout much of the country and in many aspects of everyday life. Ever since the 1990s, efforts to regulate and promote the use of Ukrainian in place of Russian have proved politically explosive and have come to symbolize independent Ukraine's post-Soviet identity crisis. Meanwhile, the national debate on the language issue has reflected lingering divisions within Ukrainian society over attitudes towards the dominant role played by Russia in the country's past.

This politicization of language does not reflect the day-to-day reality of bilingual Ukraine, where both Russian and Ukrainian are commonly spoken and widely understood across the country. Russian remains in the ascendancy in most Ukrainian cities, while Ukrainian tends to dominate in rural Ukraine and across the formerly Hapsburg lands of the west, but the linguistic fluidity of the country is such that it is not uncommon to hear both languages spoken in a single conversation.

This pragmatism has not prevented Russia and Ukraine's pro-Kremlin political parties from masterfully exploiting the language issue. Since the early 2000s, Russian-speaking Ukrainians have been actively encouraged to think of themselves as a distinct and oppressed minority. This messaging reached a crescendo during the Kremlin's 2014 annexation of Crimea and the subsequent "Russian Spring" campaign throughout southern and eastern Ukraine. It has remained at the heart of Russia's ongoing hybrid war against Ukraine ever since, with the need to defend Ukraine's Russian-speaking population repeatedly cited by the Kremlin media and Vladimir Putin himself.

The prominent role played by Russian-speaking Ukrainians in repelling Putin's hybrid invasion has done much to alter perceptions of language and identity in today's Ukraine, leading to the rise of a civic national identity that goes beyond the narrow confines of language and ethnicity. Many saw the election of Jewish Russian-speaker Volodymyr Zelenskyy as Ukraine's sixth president in 2019 as further confirmation of the country's evolving linguistic politics.

Despite this apparent progress, the language issue retains the power to provoke extreme responses within Ukrainian society. This combustibility was once more on display in mid-June when a casual social media post briefly sparked a fast food-related national scandal.

On 11 June, Ukrainian Facebook user Satana Ross posted an image of a McDonald's electronic menu screen featuring Ukrainian and English language options. The accompanying text implied that the Russian language option had been removed. The post was lighthearted in nature but quickly went viral. It was then picked up by Ukrainian pro-Kremlin politician and social media star Anatoliy Shariy, who claimed the menu language choices "once again emphasize the (negative) attitudes towards the half of Ukraine's population that speaks Russian."

Boosted by Shariy's considerable online presence and amplified by various additional Kremlin-friendly Ukrainian media outlets, the issue soon took on a life of its own, complete with calls for boycotts and the obligatory conspiracy theories involving George Soros. The scandal even developed a diplomatic dimension, with the Ukrainian Embassy in Washington DC tweeting its thanks to McDonald's for the company's "firm position" on the language issue. The Russian Embassy responded to this by accusing the fast food giant of "excluding minority languages".

As tempers flared, few seemed to care when McDonald's officials clarified that there had never actually been a Russian-language option on the company's electronic menus in Ukraine, but customers were welcome to order in Russian if they preferred.

This manufactured outrage over a McDonald's menu may seem trivial, but it underlines how language sensitivies can be manipulated by anyone wishing to destabilize Ukraine. As Ukrainian society continues to address the linguistic disparities created by generations of russification in every sphere of public life, the scope for similar flash points remains vast.

Despite ongoing attempts to portray Russian as an oppressed language, many believe that Ukrainian is actually in far greater need of governmental support and protection.

Despite ongoing attempts to portray Russian as an oppressed language, many believe that Ukrainian is actually in far greater need of governmental support and protection. Longstanding chauvinistic and demeaning Russian stereotypes of Ukrainian remain widespread, while the systematic eradication of Ukrainian cultural identity under Stalin continues to cast a long shadow over modern Ukrainian society. Efforts to popularize the Ukrainian language among young Ukrainians must also compete against the often overwhelming influence of contemporary Russian pop culture.

Against this backdrop, many Ukrainians regarded the adoption of a new Language Law in early 2019 as a moment of optimism in the country's long nation-building journey. Ukrainian philosopher and journalist Volodymyr Yermolenko saw it as the first systematic attempt to boost the development of Ukrainian culture in 28 years of independence. The Law sought to enhance the status of the Ukrainian language throughout society, with a particular emphasis on the media and public services.

This new Language Law seems to be broadly in line with public opinion. A poll conducted by the respected Democratic Initiatives Foundation and Razumkov Center in December 2019 found that 69% of Ukrainians favored preserving Ukrainian as the country's only official state language while maintaining the freedom to use Russian in private life. Nevertheless, amendments to the Language Law remain on the political agenda, with senior members of President Zelenskyy's political team leading calls for changes.

In the current political climate, any attempts to dilute the status of the Ukrainian language will be particularly dangerous.

In the current political climate, any attempts to dilute the status of the Ukrainian language will be particularly dangerous. With no end in sight to the country's six-year undeclared war with Russia, and with Ukraine's own pro-Kremlin forces gradually reasserting their influence on the domestic political scene, efforts to revise the Language Law or postpone implementation could quickly escalate into a national crisis.

Ukraine knows from decades of painful experience that the language issue ranks among Russia's favorite destabilization tools. There are growing indications that the country's Kremlin-friendly forces are once again preparing to use it as a rallying cry. Putin's closest personal ally in Ukraine, opposition leader Viktor Medvedchuk, recently published an op-ed calling for an end to "forced Ukrainization" and "anti-Russian hysteria" while arguing that greater rights for Russian-speaking Ukrainians could play a decisive role in winning back the largely Russian-speaking population of Kremlin-occupied eastern Ukraine.

Medvedchuk's arguments may seem persuasive to President Zelenskyy as he struggles to make good on his election promises of bringing peace and national unity to the country. However, any concessions that boost the Russian language at the expense of Ukrainian would pose a very real threat to the country's future sovereignty.

The past six years of Russian hybrid warfare have made Kremlin attitudes towards the language issue crystal clear, and have only served to underline the importance of safeguarding the status of Ukrainian. Polls indicate that most Ukrainians recognize this, but incidents like June's McDonald's menu debacle reflect continued vulnerability to linguistic provocations. Zelenskyy wishes to enter Ukrainian history as a unifying figure who transcends linguistic boundaries, but he must trend carefully. If a new language war breaks out in Ukraine, the only winner will be Vladimir Putin.

A new app using augmented reality technology to tell the stories of Ukrainian prisoners of the Kremlin has been launched by Internews Ukraine, with support of the...
Stories
May 10, 2022

Story #16. The Life of an Engineer from Mariupol under Russia's "liberation"

The life of an engineer from Mariupol under Russia’s “liberation”.