June 23, 2020
In past years, but especially after the 2019 elections in Ukraine, anti-Western and anti-democratic messages have become more widespread in the Ukrainian information space. We have studied five anti-western narratives which have been very popular in Ukraine’s information space in 2020. 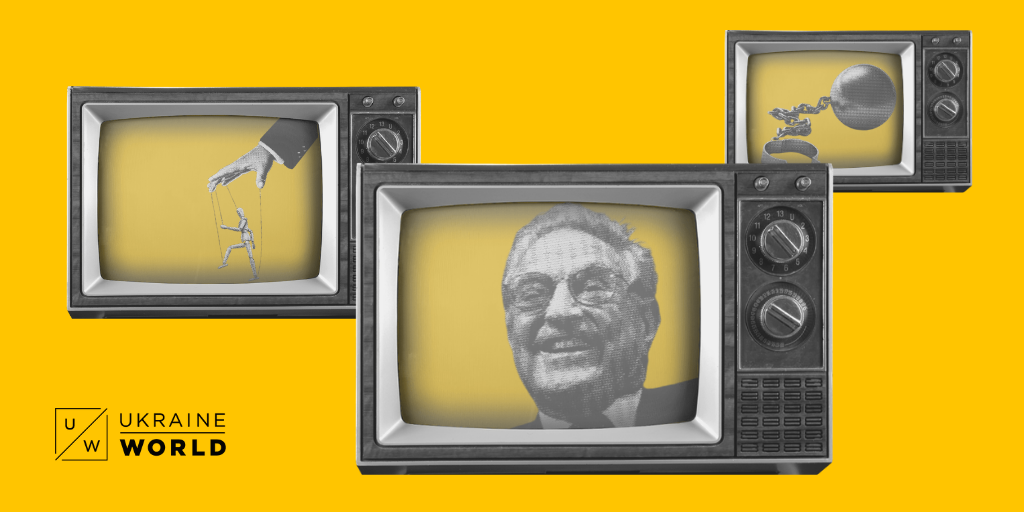 Note: this research is based on our regular roundup of anti-Western messages in Ukraine as well as data provided by Semanticforce. The search was conducted over 9 thousand news websites, 2 thousand blogs and all popular social networks (Facebook, Instagram, Twitter, VK, Odnoklassniki). The timeframe of this research is January 1 --- June 15, 2020.

"George Soros has numerous servants in Ukraine, the so-called "sorosiata"

This narrative has been the most popular: we've spotted 79811 messages in 708 sources which have promoted it. We can see the biggest surge in January 2020 --- that's when the term "sorosiata" started being actively promoted by anti-Western actors to target the government of Oleksiy Honcharuk. Another key moment was the beginning of March, when a broadcast marathon called "It Reeks of Soros" was held on ZIK TV channel.

The term "sorosiata" has joined the lexicon of anti-Western actors. It is used to describe any person who has ever had any connection to Western or Western-financed organisations. According to the narrative, "evil and greedy "sorosiata" do everything to please their master, Budapest-born American financier and philanthropist George Soros, who is portrayed as "the almighty leader of globalists." They are even willing to betray the interests of their country for more money from Soros, anti-Western actors say. 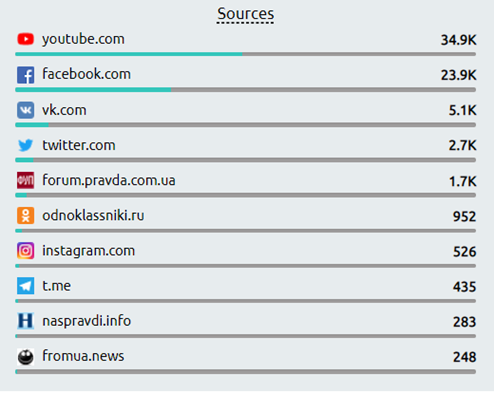 Anti-Western players blame "sorosiata" for any economic difficulties or processes in Ukraine's political and cultural life which they don't like. Hence, the contexts in which "sorosiata" are mentioned are quite diverse:

"Ukraine is under external governance"

This narrative goes hand-in-hand with the one about "sorosiata," but it targets foreign governments and international organisations instead of Ukrainian civil society.  It has been the second most popular: we've spotted 12678 messages in 484 sources which have promoted it.

We see a huge spike in activity at the beginning of March, right after the "It Reeks of Soros" marathon on ZIK. OnMarch 10, as well, news appeared that the long-pushed-for agricultural land market law might be adopted soon, so anti-Western actors reacted to this actively. Another spike can be observed in the second half of May and beginning of June, right after the so-called "Poroshenko-Biden tapes" were published. It was also the key period of negotiations with the IMF on provision of the first loan tranche of the new stand-by programme.

According to anti-Western actors, globalists organised Euromaidan in 2013-2014 to overthrow the legitimate government in Ukraine and replace it with their pawns. They succeeded in this, anti-Western actors say, and Ukraine has been ruled from the U.S. ever since. According to this narrative, the end goal of the "external governance" is to drain natural resources from Ukraine, control all state-owned enterprises and turn our state into a colony.

This narrative was spotted on all available social networks. It was also very popular with MPs from the pro-Russian Opposition Platform---For Life party and TV channels allegedly controlled by Viktor Medvedchuk: 112 Ukraine, NewsOne and ZIK. 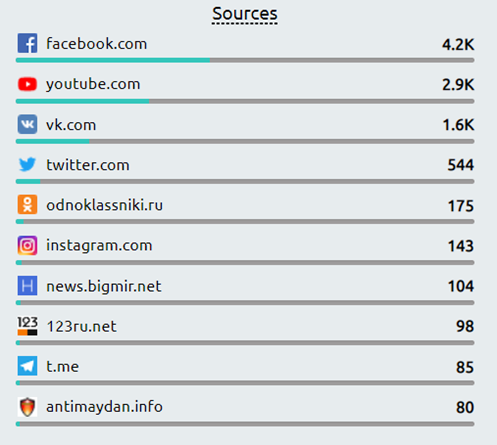 The narrative about "external governance" is very linear and straightforward. Many different actors repeat the same points:

"Ukrainian land will be sold off"

While this narrative is more specific --- it has been targeted specifically against the long-pushed-for agricultural land market law --- it has still been very active this year. We've spotted 6110 messages in 484 sources which have promoted it. We can see spikes of activity in key periods of this law's adoption. On February 6, the Verkhovna Rada started looking into the draft law. On March 30, this law was adopted by the Rada. On April 30, the law was published in the Holos Ukrayiny newspaper and therefore officially went into force.

According to anti-Western actors, "the greedy West" wants to buy out all Ukrainian agricultural lands on the cheap, stealing it from ordinary Ukrainians. This would lead to deterioration of Ukraine's agricultural industry which would leave many Ukrainians without means for existence, they say.

This narrative can be readily spotted on social networks and in speeches of MPs from various parties, including Opposition Platform---For Life, Servant of the People, and Batkivshchyna. 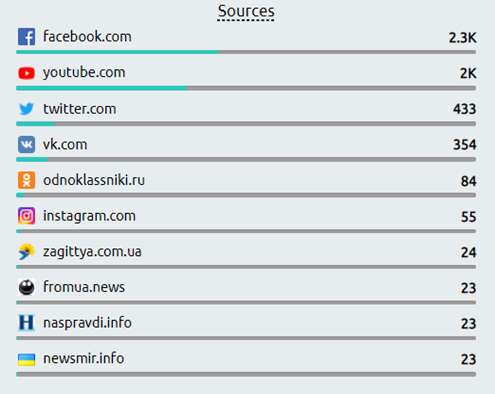 Here is what anti-Western actors say about the agricultural land market law;

"The IMF has enslaved Ukraine"

Anti-Western actors portray the International Monetary Fund as the organisation responsible for Ukraine's economic crisis. It has been in the spotlight since the beginning of the year due to negotiations on providing Ukraine with a new loan. This narrative was seen in 2640 messages over 309 sources. This narrative has become especially active since the end of March when negotiations on the next programme of cooperation with the IMF began.

The International Monetary Fund stands separate from all other international organisations in the minds of anti-Western actors. According to most of them, it controls Ukraine's political, social and economic life to squeeze natural resources directly out of Ukraine.

This narrative can be spotted on social networks, "junk websites," and TV channels from Medvedchuk's sphere of influence. 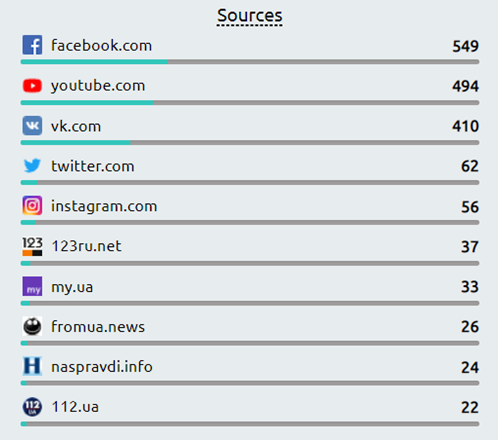 Notable examples of such rhetoric include:

This is another narrative which is targeted mainly against Ukrainian civil society. Anti-Western actors say those who support Ukraine's EU and NATO integration are controlled from Washington. We spotted 1751 such messages over 142 sources. Unlike in previous narratives, there are many equally active spikes in this narrative. This is due to the fact that since the beginning of the year there were many protests by Ukrainian activists who, according to anti-Western actors, are controlled by the U.S. Embassy in Ukraine.

Anti-Western actors truly hate and despise the activists who steered Ukraine's course away from Russia back in 2014. That's why they are trying to show them as dependent on the United States. They try to say that there was no Revolution of Dignity in Ukraine, but merely a foreign intervention from Washington. This is a clear continuation of Kremlin narratives which blame the U.S. for "organizing Euromaidan."

This narrative is mostly active on Russian social networks and "junk websites" controlled by Russia. However, pro-Russian politicians from Opposition Platform---For Life and anonymous Telegram channels also use it quite often. 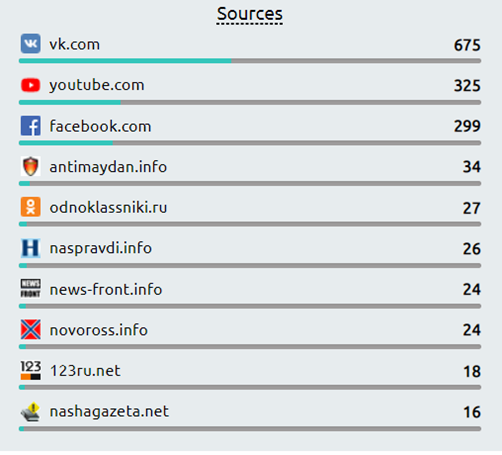 Some examples of this rhetoric:

These are only few of the many narratives spread by anti-Western actors and information sources in Ukraine. There are many others which target specific policies, organisations, or persons. Howerer, there  is one thing that unites all these narratives - they are aimed at undermining trust in democracy and creating a monstrous image of the "West" ("Europe", "America", "Soros", and "the IMF") trying to destroy Ukrainian sovereignty. They also try to build an "information bubble" for Russian-speaking Ukrainians and supporters of pro-Russian political parties and escalate tensions in Ukrainian society to destabilize our country.

On 21 April Ukraine will elect its next President. So far these elections have been the most democratic and the most interesting to follow in the history of our...
VIDEO
August 8, 2018