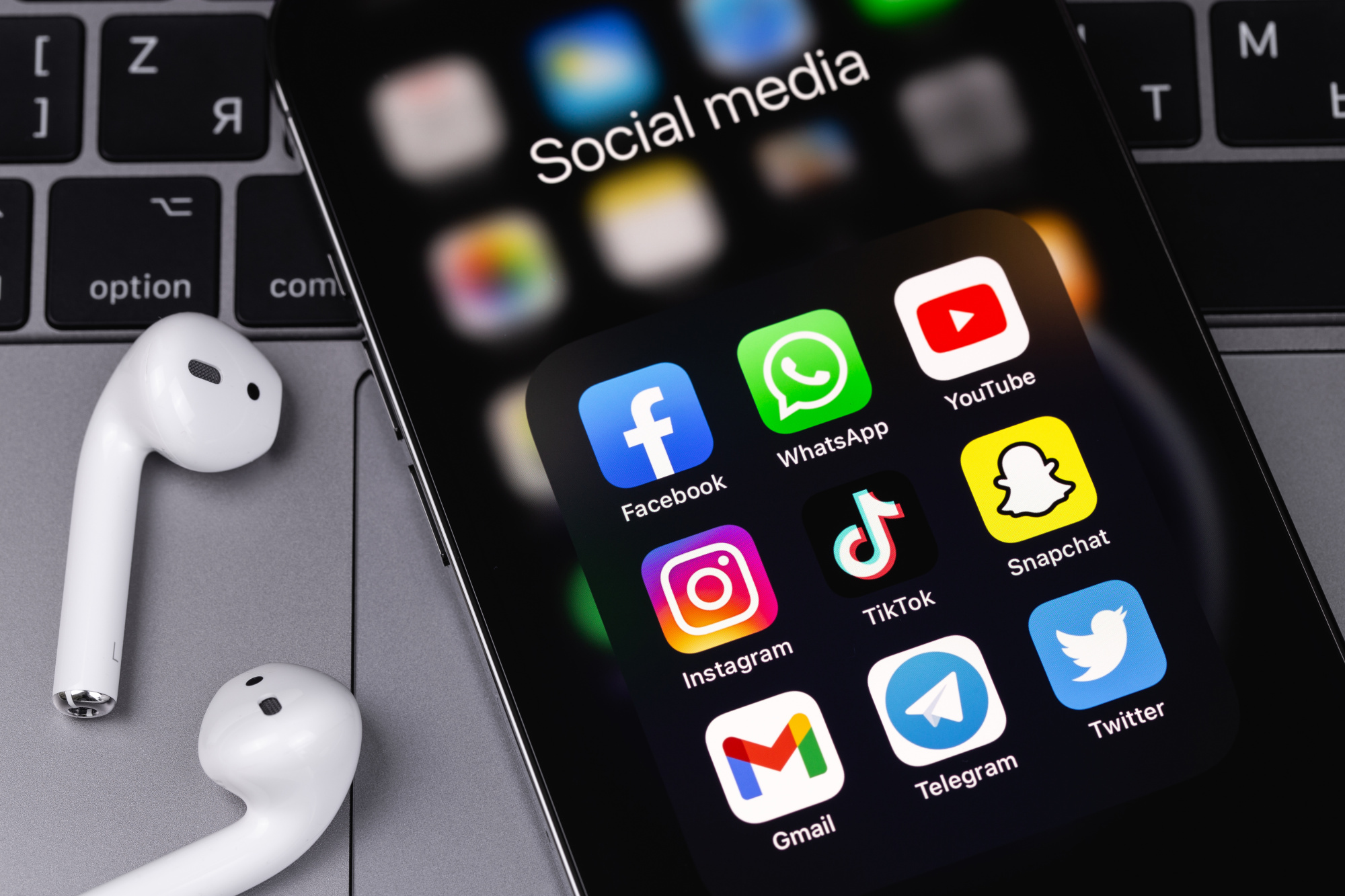 On February 7, during his press conference with French President Emmanuel Macron, Russian President Vladimir Putin stressed the importance of the Minsk Protocols. "As for the Minsk Protocols, are they alive and do they have any prospects or not? I believe that there is simply no other alternative. I repeat once again, in Kyiv, they either say that they will comply, or they say that this will destroy their country. The incumbent president recently stated that he does not like a single point of these Minsk Protocols. 'Like it or don't like it, it's your duty, my beauty.' They must be fulfilled. It won't work otherwise," Putin said.

Putin's rhetoric coincided with an increase in messages related to Minsk Protocols on the Russian-language segments of Facebook, Telegram and Twitter. Pro-Russian accounts have been relaying Putin's rhetoric and saying that Ukraine is the aggressor state which does not want to implement the Minsk Protocols. What has this looked like on social media?

Data from Crowdtangle, a public insights tool owned and operated by Meta, shows an increase in mentions of the Minsk Protocols in Russian-language posts right after the Putin-Macron press conference. 174 such posts appeared on February 8, a significant increase over 23 posts on February 7 and 6 posts on February 6. Similar spikes happened on February 1 (102 posts — following a statement by Ukrainian President Volodymyr Zelensky) and January 28 (126 posts — after a statement by Russian foreign minister Sergei Lavrov). 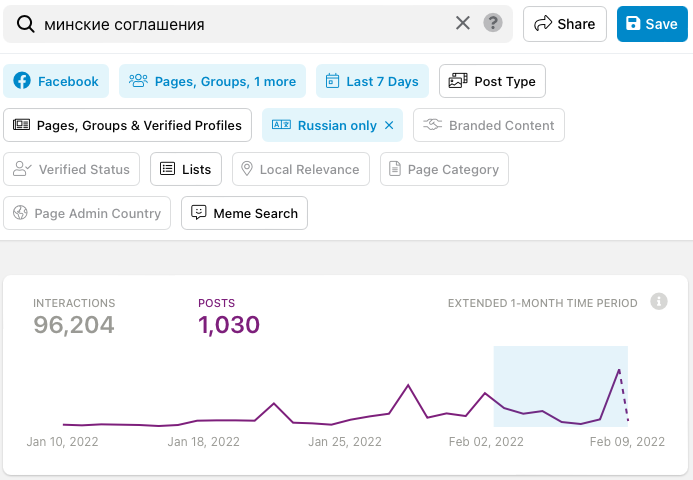 The three posts with the most engagement (likes+comments+shares) since the beginning of February all echoed the Kremlin's narrative on the Minsk Agreements, but in different ways.

The most engaged-with post appeared on the public page Владимир Путин (Vladimir Putin), "the official page of supporters of Vladimir Putin." The post features a clip from the Putin-Macron press conference in which Putin says that "already twice Ukrainian authorities have tried to solve the issue of Donbas by  armed means," and that Russia therefore needed "security guarantees." Notably, people commenting on this post and sharing it mostly have non-Slavic names. Many of these are either accounts without profile pictures or avid Putin fans — possibly bots.

The second most engaged-with post was published on the page Блог обо всем и ниАчем (A blog about everything and nothing). The post mocks Ukraine's President Volodymyr Zelenskyi for spouting "a fountain of random phrases" in his answer to a question about the Minsk Agreements during a joint press conference with Britain's Prime Minister Boris Johnson.

The page is not pro-Russian, but is nevertheless very critical towards the Ukrainian President. While there is nothing wrong about that, the page has suspicious follower dynamics. During the period of November 1-November 30, 2021, 18.4 thousand news followers appeared on the page, a 39.7% increase. This might indicate the usage of bots to amplify the reach of the page. 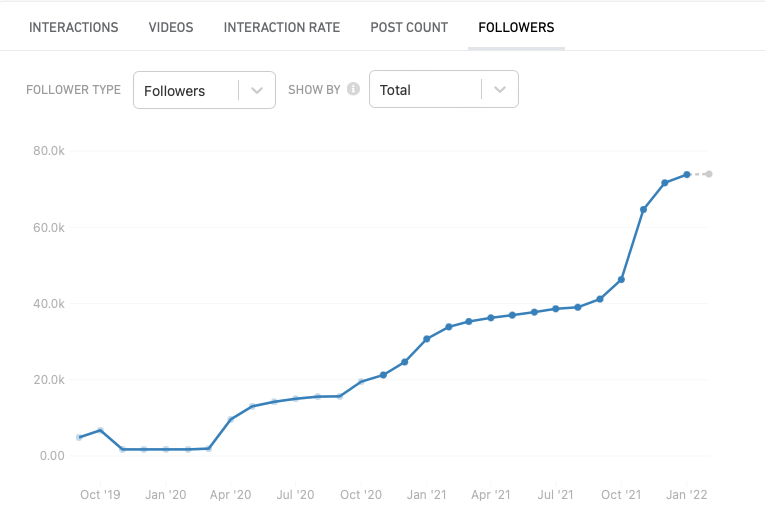 Another suspicious fact is that the page is managed by two people from Spain in addition to one account from Ukraine. Additionally, the authors of the page do not disclose their identity either on the page or on the linked website vovka.com.ua. 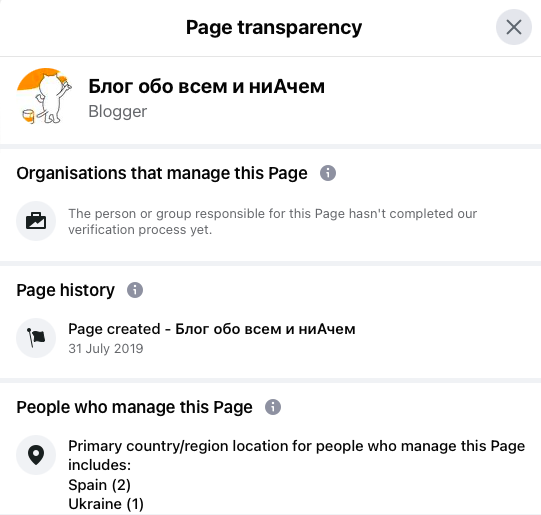 Finally, the third most engaged-with post appeared on the profile of Oleksandr Kachnyi, a Ukrainian MP from the pro-Russian party Opposition Platform — For Life. Kachnyi posted a clip of his speech on TV channel Ukrayina 24 (owned by Rinat Akhmetov), in which he said that "Ukraine has become just a springboard where the main actions are unfolding" and "the US and Russia are fighting not for Ukraine, but for influence in the world."

The post was shared to numerous pro-Russian public groups by bots. One example is the newly created profile Алла Сулицкая, which has no friends, uses a drawing for its profile picture, and regularly repost news from Russian sources like TASS. This account shared the post by Kachnyi to the Facebook groups Освободим Украину! Олег Царев (Let's free Ukraine! Oleg Tsarev), АНТИ ЗОМБИ УКРАИНА 2 (ANTI ZOMBIE UKRAINE 2) and Народно-освободительное движение Украины (People's liberation movement of Ukraine). Messages in all these groups call for "freeing Ukraine from  American rule." 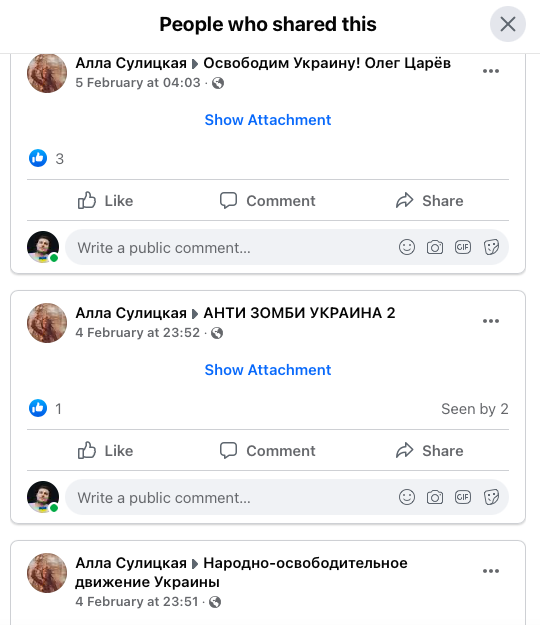 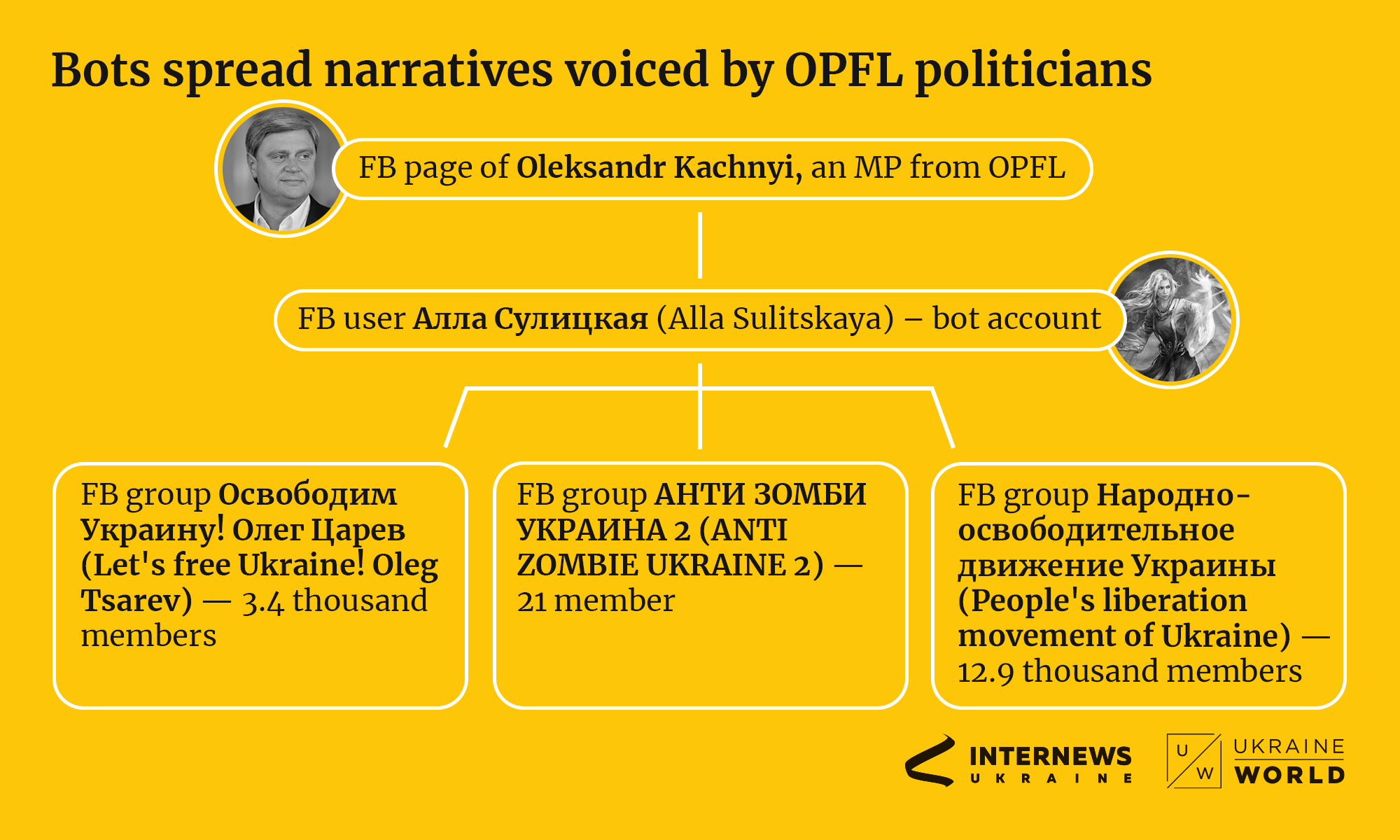 The dynamics of posts about Minsk Protocols on Telegram are very similar to what was observed on Facebook. According to tgstat.com, a Telegram analytics service, 886 posts mentioning the agreements were posted on February 8, reaching 5,294,805 users. Most of these posts also relay Kremlin narratives. 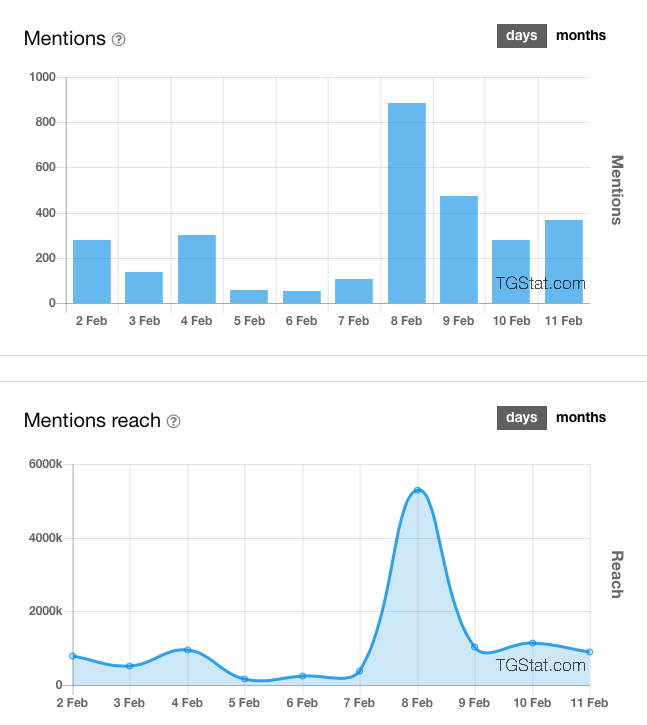 For instance, the anonymous channel Майор и Генерал (Major and General) wrote in regard to Putin's "like it or don't like it, it's your duty, my beauty" expression that "the current statehood of Ukraine is a corpse which one uses for unnatural relations." 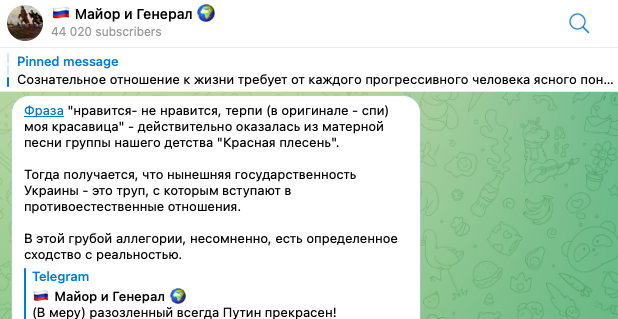 Legitimnyi, another anonymous channel, which is allegedly controlled by Russia's Main Intelligence Directorate (GRU), writes that the "London lobby" is pushing Ukraine's President to "choose the path of war", because "confrontation in Ukraine allows [them] to earn billions." 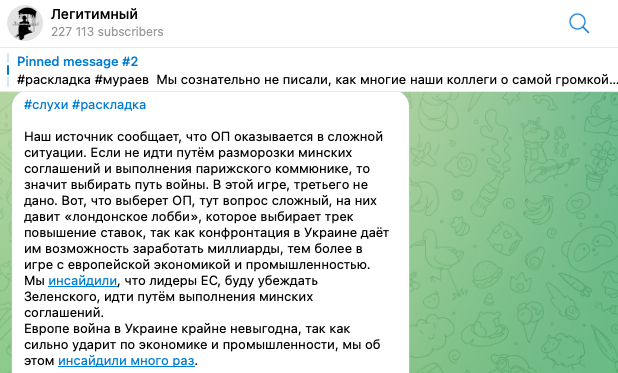 Oleg Tsarev, a former Ukrainian MP who fled to Russia in 2014, wrote in a Telegram post that "Ukraine is a country occupied by NATO," and therefore "Russia has the legal right to liberate the primordially Slavic lands from occupation." 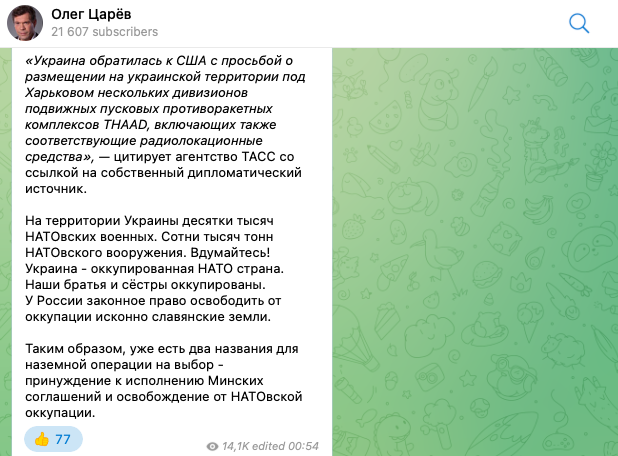 On Twitter, popular accounts are being used to promote messages pushing pro-Kremlin narratives, which are further distributed by networks of bot accounts.

For instance, according to data from Hoaxy, a monitoring instrument set up by the University of Indiana, the primary conversation starter on the Minsk Protocols on Twitter is Vladimir Soloviov, one of the Kremlin's key propagandists. His tweets related to the Minsk Protocols were distributed by a network of 929 accounts, 239 of which are more likely bots.

In order to support the Kremlin's narratives, Soloviov often manipulates in his tweets. For instance, according to one of his tweets, the German parliament has stated that Ukraine can no longer be supported unilaterally until it fulfills the Minsk Protocols. 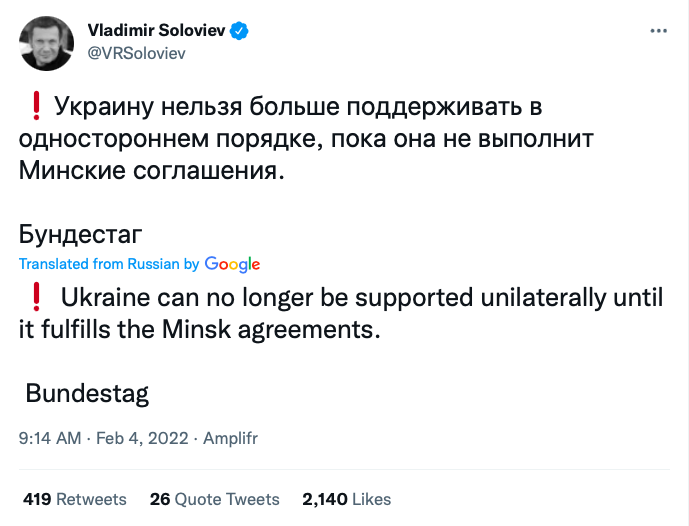 This tweet is in line with headlines in the Russian media. However, this was not the statement of the German parliament as a whole, but words of only one MP — Stefan Kottre, a representative of the far-right Alternative für Deutschland (AfD) party which often relays Kremlin narratives in Germany. Nevertheless, Soloviov's tweet was retweeted 445 times. 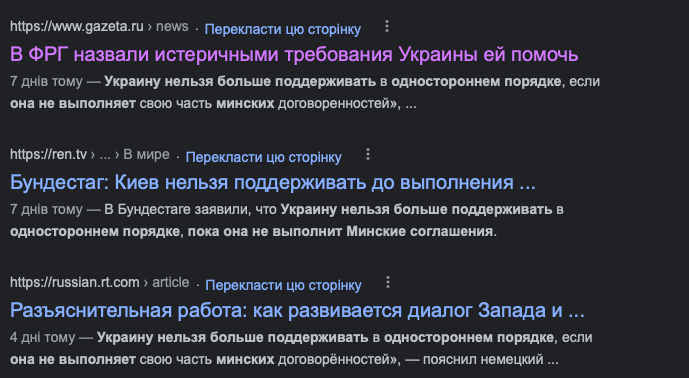 The Kremlin's disinformation campaigns on Minsk Protocols are based on its own understanding of how these agreements should be implemented. The Kremlin and its proxies in the so-called "DPR" and "LPR" escalated hostilities both in 2014 and 2015 prior to negotiation of the Minsk Protocols (referred to as  "Minsk-1" and "Minsk-2" in order to force a deal on Russia's terms, using the strategy of "coercion to peace."

While Ukraine holds that the political components of the Minsk Protocols can only be sustainably ensured when the security elements (namely the withdrawal of Russian forces and equipment and the returning of the border to Ukrainian control) are ensured, Russia is demanding internal political changes in Ukraine (special status for of the now-occupied territories, changes to the constitution etc), only then to be followed by a peace settlement on the ground.

Over the years, Ukraine's refusal to proceed with the political steps has been portrayed as unwillingness to make peace. This is also the key message of the latest Kremlin disinformation campaign. According to the Kremlin's narrative, voiced both in the statements of Russian officials and on social networks, Ukraine is an aggressor state egged on by the West to attack the pro-Russian militants in Donbas or even Russia itself, which could be used as a possible pretext for a new Russian invasion of Ukraine.

Crimea has a rich history and diverse culture. However, since Russia’s illegal annexation in 2014, Crimea’s unique heritage is jeopardized. Our new video produced...
PODCAST
December 14, 2021