June 19, 2020
As the world is captivated by the Black Lives Matter protests in the United States and around the world, Ukrainians are faced with an incident of grave police misconduct in their own country. UkraineWorld analyzed why police violence is a systemic problem in Ukraine, and why blame lies at the feet of the Interior Minister. 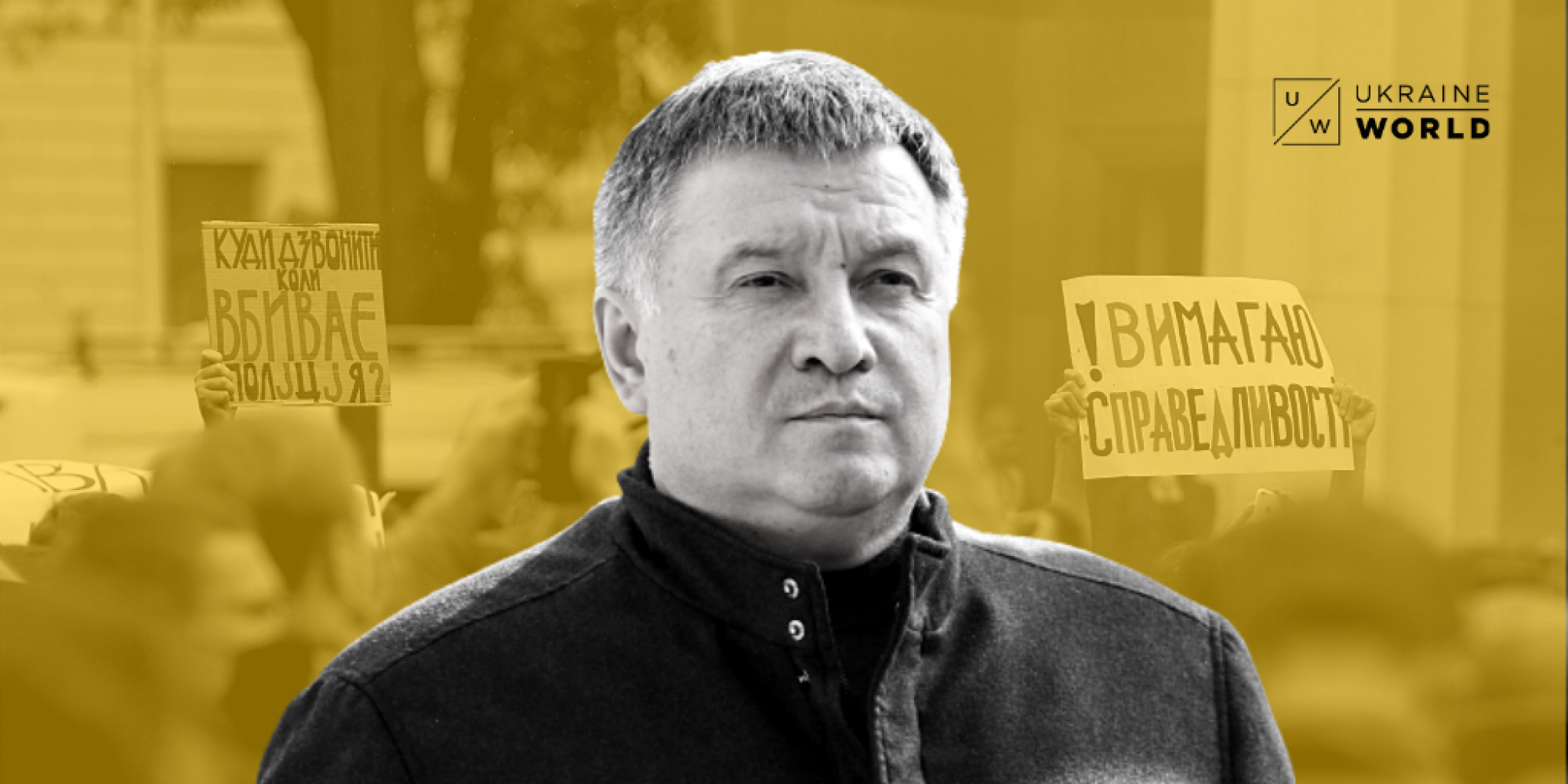 A day before they joined the world in watching the unfolding protests in America over the murder of George Floyd, Ukrainians had their attention called to outrageous police misconduct in their own country. On the night of May 23-24, two policemen allegedly tortured and raped a woman in Kaharlyk, a small town in Kyiv Oblast. She had been summoned to the police station for questioning as a witness to a case of theft, but according to reports, an officer at the station put a gas mask on her, handcuffed her, and fired a shotgun over her head to terrorize her. The officer then allegedly raped the woman several times. The same night, another man was reportedly beaten with the truncheons and threatened with rape at the same police department, suffering fractured ribs and a broken nose.

The following day, the head of the National Police fired the accused police officersHe also promised to dismiss the management of the police department, to disband the department and to recertify all the employees in the next two months. Two police officers suspected of rape were arrested. Later on, investigators discovered other cases of abuse that had taken place earlier in the same police department. Yuriy Belousov, Head of the Special Department of the Prosecutor General's Office for Supervision of the Investigation of Torture in Law Enforcement Bodies, confirmed that the incident was part of "a systematic practice."

Quarantine restrictions are not the only reason why the case in Kaharlyk has sparked little protest. The truth is that it was by no means an unprecedented act of police violence in Ukraine.

Even six years into his tenure, Ukraine's Interior Minister Arsen Avakov has allowed police abuse to remain a systematic problem which has reincarnated itself under each new government in the Rada. Even worse, Avakov himself has been part of this systemic problem.

Journalists and human rights defenders argue that the recent rape case is just the tip of the iceberg -- one of those few examples among many others that occasionally get the media spotlight. For civic activists, this latest incident is a small encapsulation of how rotten the law enforcement system in Ukraine really is.

A week after Kaharlyk, a "gangland-style" shootout shook the residential area of Brovary, a town some 20 kilometers away from Kyiv. The confrontation was reportedly between criminal protection groups for authorized and unauthorized passenger transportation services. Out of 100 participants, 28 have been arrested so far. But instead of seeing the incident as a failure of the police to ensure civil order and public safety, Avakov presented the incident in comments on 5 June as an example of prompt police reaction to sudden mayhem.

Besides what could be seen as a sudden outbreak of criminal skirmishes that no one was prepared for, the public still remembersa shocking killing of a 5-year-old Kyryl Tliavov by a drunk policeman almost exactly a year ago in Kyiv Oblast. So far, no one has been convicted of the negligent homicide, and the two suspects have been released on bail, thus showing a police system far more broken than in Avakov's rosy representations.

All of this together has given Ukrainians another reason to express their fury with the rotten law enforcement system headed by Arsen Avakov. While the international Black Lives Matter protests initially held the attention of most social media users, Ukrainian activists and journalists have tried to call their fellow citizens’ attention to Ukraine’s own problems of police abuse and support protests against Avakov.

Carrying signs with messages like  mottos like "Avak-Off" [a play on words with the Interior Minister's surname - ed.], "Avakov is a devil," and "Whom can we call when the police kill?" hundreds of people in Kyiv, Lviv, and Uzhhorod took to the streets to  call for his dismissal on June 5, as Avakov  was addressing the Parliament after being summoned to account for the results of his tenure.

Anger at the "forever interim minister," as Avakov is often called (in reference to his original interim appointment to his position), has accumulated steadily as he has remained in office and gathered more power for himself over the past six years

After being appointed Interior Minister right after the Euromaidan revolution (and before the May 2014 Presidential election), Arsen Avakov was considered to be "the main counterweight" to then-President Petro Poroshenko. According to independent Ukrainian news outlet Ukrainska Pravda, different sources confirm that the Minister not only controls all the law enforcement power structures, but also has a political influence around the country. In spite of public demand, this has not changed since Volodymyr Zelensky took office as President in May 2019. Though four governments in the Rada have come and gone, Avakov remains. To top it all off, during the press conference about his first year in office, Zelensky called Avakov "a powerful minister," though he also eemphasized Avakov's responsibility for concluding the investigation of the murder of Belarusian-Ukrainian journalist Pavlo Sheremet, who was killed in July 2016. The Minister shortly thereafter denied his role in the investigation.

Yet, this is not an isolated case. The Ukrainian public has repeatedly reminded Avakov that the Interior Ministry under his supervision has sabotaged the investigations of high-profile cases. As with the Sheremet case, no instigator has been found or held accountable for the death of Kateryna Handziuk, an anti-corruption activist in Kherson who was doused with acid.

Appalling attacks on activists, lawyers, and independent journalists have gone without serious investigation and have left many bloody stains on Avakov's reputation.

Another tendency that highlights the danger of the growing power of Ukraine's within Ukraine's law enforcement is the persecution of veterans and activists. The latest instance is the case of Odesa activist Serhiy Sternenko. The ex-leader of the Odessa "Praviy Sector" (Right Sector- ed.) is now accused of premeditated murder and illegal handling of weapons after he killed an attacker in self-defence  on 25 May, 2018. While Sternenko had been attacked three times in the first half of 2018, investigators have still cast doubt on his self-defence claims. Despite public outrage with the investigation, a court placed him under house arrest on 15 June. Sternenko's case is only the latest of many notorious dubious investigations in Ukraine. The investigation of the Sheremet case shows that veterans and volunteers of the Donbas War might one day be labeled criminals as well.

All together, the torture, rape, and murder committed by police officers, along with their general impunity for serious crimes, expose Avakov's failure to reform the law enforcement system that was so hoped for after the Euromaidan Revolution. In the judgement of Khatia Dekanoidze, the head of Ukraine's National Police in 2015-2016 who oversaw the creation of Ukraine's post-Maidan reformed police force, the recent examples of Kaharlyk rape and the Brovary gangland shooting are striking evidence of this failure. In an interview for Ukrainian RFE/RL, she noted that "93 percent of those [policemen] dismissed after the re-certification have been reinstated through the courts," and the criminal investigative units have not been properly reformed, either.

In addition to his lack of political will to drag Ukraine out of the post-Soviet swamp, where law enforcement is more of a threat than a protector, Avakov keeps boasting about his ministry's dubious achievements.

As protestors decried the lack of safety and fear in the country outside the Verkhovna Rada on 5 June, Avakov urged the deputies inside to look on the bright side. "Unfortunately, cases of torture and maltreatment exist in police of any country in the world," the Minister stated in reference to the rape of a woman in Kaharlyk. However, unlike in a similar case in Vradiivka in 2013, when policemen beat and raped a 29-year-old woman, Avakov proudly pointed out that this time, the crime in Kaharlyk was "not covered up" but reported on time. When Holos party MP Inna Sovsun confronted the minister and asked him to apologize for police atrocities, Avakov furiously dismissed her demands. Although Avakov refuses to recognize his political responsibility for injustice, Ukraine's parliament will soon have to make its own decision on change in Ukrainian law enforcement with a resolution on Avakov's dismissal awaiting a vote.

Whatever the Interior Minister boasts as his accomplishments in a self-praising Soviet manner, be it with an increase in criminal referrals for police misconduct, or his far-fetched claims of a 92% success rate in solving murders, the reality proves him wrong. All this does not make people feel safe.

The infuriating lack of discipline and accountability in law enforcement under Avakov is what made far-right nationalists, LGBT-activists, and Crimean Tatars stand side by side against him in a protest in the Western city of Lviv.

"No Ukrainians can feel protected as long as such [professionals -ed.] as Avakov are in office. Because they generate danger," said Serhiy Sternenko during the protest against police misconduct. The infuriating lack of discipline and accountability in law enforcement under Avakov is what made far-right nationalists, LGBT-activists, and Crimean Tatars stand side by side against him in a protest in the Western city of Lviv. This is the ultimate sign that now is a critical time for change in Ukrainian law enforcement culture, and for it to happen without Avakov.

Read a new issue of bi-weekly newsletter with monitoring of Russian activities and influence in Belarus to know more.
PODCAST
June 5, 2020