February 22, 2021
The blocked TV channels linked to Medvedchuk claim to be in opposition to the government. Under this guise, they have been spreading Russian narratives in Ukraine. 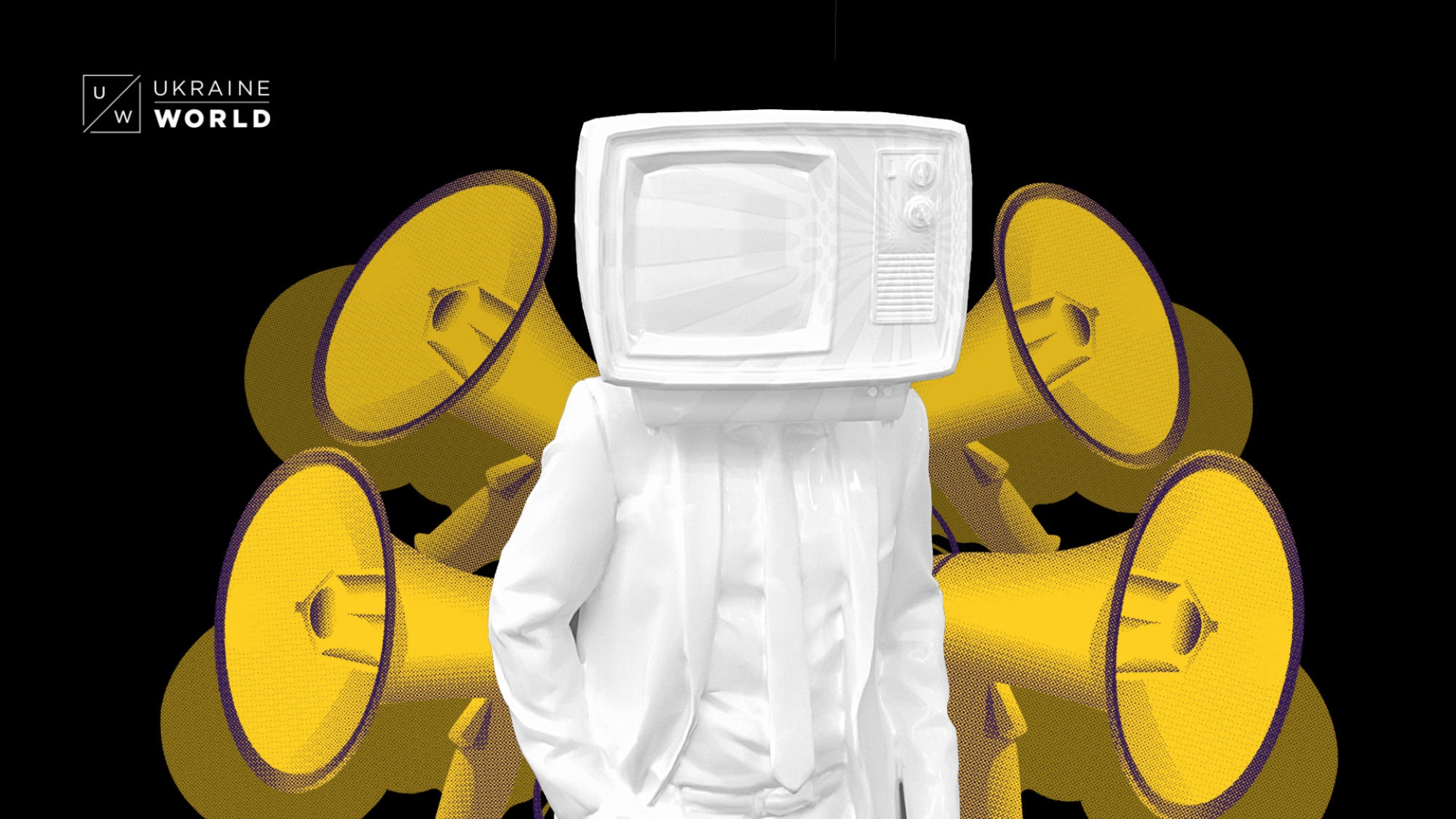 On February 2, Ukraine's President Volodymyr Zelensky signed a decree which enacted the decision of the National Security and Defense Council of Ukraine to impose sanctions on Taras Kozak, the formal owner of TV channels 112 Ukraine, NewsOne, and ZIK (Novyny media group). However, the de-facto beneficiary of these channels has for several years been Viktor Medvedchuk, one of the leaders of the pro-Russian party, Opposition Platform — For Life.

Sanctions against Kozak were introduced at this particular point time because of findings by Ukrainian intelligence services that 112 Ukraine, NewsOne, and ZIK had received financing from the temporarily occupied territories of Donetsk and Luhansk Oblasts of Ukraine and the Russian Federation, nv.ua writes. Dzerkalo Tyzhnia newspaper writes that the money used to fund the channels came from selling coal from occupied Donbas.

Ever since the closure, journalists from the blocked channels and MPs from Opposition Platform — For Life have been saying that President Zelensky has unjustly and illegally usurped power and destroyed his opposition. They also criticize Europe and the U.S. for their refusal to react to such a blatant violation of freedom of speech.

The activities of Russia-linked TV channels in Ukraine are not only an issue of freedom of speech, but also of national security. It is always difficult to find a balance between freedom and security when a country is at war.  Ukrainian media organisations issued a statement on the issue, saying that "any information resources which are financially linked to the aggressor state or to those having a close relationship with the main culprit of the current war — the Russian president — cannot operate in a country that is victimized by their aggression." Another statement issued by the Ukraine Crisis Media Center reads that "these channels constitute tools of foreign influence operations, and therefore a systemic threat to the information security of Ukraine."

All three TV channels regularly repeated pro-Kremlin disinformation and misinformation narratives. The goal of this article is to provide examples where the messages spread by Russian officials and Russian media aligned with what was said on 112 Ukraine, NewsOne, and ZIK.

"It's not Russia's fault that Ukraine lost Crimea"

● Russia's President Vladimir Putin said in the documentary "Crimea: Road to the Motherland" that in 2014, Russia was ready to use nuclear weapons to protect "its people in Crimea" from "Ukrainian nationalists." "I told [Western] colleagues that it [Crimea] is our historic territory, Russian people are living there and they turned out to be in danger," Putin stated.;

● Vladimir Soloviov, TV host on Russian state-owned channel Rossiya 1, argued that "the U.S. wanted to turn Crimea into NATO military base," hence Russia had to act and annex Crimea;

● Anatoliy Shariy, Ukraine's most popular political blogger and the leader of the Party of Shariy, stated on NewsOne that there have always been pro-Russian sentiments in Crimea, but "they [People of Crimea] started thinking about breaking away [from Ukraine] because they were intimidated [during the Euromaidan]";

● Olena Bondarenko, former MP from the Party of Regions, decried on 112 Ukraine that the U.S. used Crimea to play out a geopolitical combination against Russia: if Russia didn't take Crimea, the U.S. would have; if Russia took Crimea, the U.S would introduce sanctions. "This is a perfect scheme to put Russia into an unfavourable situation using Ukraine," Bondarenko argued.

"Ukraine is under the external governance of the West"

● Russia's President Vladimir Putin argued in an interview for TASS  that the U.S. "is courting Ukraine and has taken it under external control, but they want Ukraine to exist in part for our [Russian] money";

● Vladimir Zhirinovsky, the leader of the Liberal Democratic Party of Russia argued in an interview with Vladimir Soloviov that the "armed forces of LDPR ["Luhansk People's Republic" and "Donetsk People's Republic"], with support from Russia, should free Ukraine from its external governance";

● Andriy Derkach, a non-affiliated MP with links to Russian intelligence, appeared on 112 Ukraine TV channel saying that "international corruption and external governance are twins which create the context in which Ukraine lives." He claimed that "external governance" created the High Anti-Corruption Court, NABU and supervisory boards for state-owned companies "which are outside of state control" to "effectively drain money [from Ukraine]";

● Olexandr Dubinskyi, a blogger and MP who was recently expelled from the Servant of the People (party due to the U.S. sanctions against him), asserted on 112 Ukraine that "Ukraine's biggest problem is the external governance".

"George Soros has numerous servants in Ukraine, the so-called "Sorosiata"

● While commenting on the accusations against Russia of interference in U.S. elections, Vladimir Putin said that George Soros "interferes everywhere," but that is his position as a private person, not the position of the U.S.;

● Ukrainian political commentator Kirill Molchanov argued in an interview for Russian website ukraina.ru (run by the Russian state-owned news agency RIA Novosti) that "the myth that Zelensky was allegedly a puppet of Kolomoisky was busted very quickly. In reality, the country [Ukraine] is controlled by "Sorosiata".

● On February 28, 2020, a "marathon" titled "It Reeks of Soros" took place on ZIK. On November 13, 2020 the channel decided to repeat this broadcast. The new "marathon" was called "Revanche of Sorosiatnia [Soros' mob]." An ad for this "marathon" claimed that "Joe Biden has won, the Democrats are back, and sorosiata are already preparing popcorn and gallows: popcorn for themselves and gallows for all Ukraine";

● 112 Ukraine, NewsOne, and ZIK aired a live broadcast of "a protest against external governance" near the U.S. Embassy to Ukraine in Kyiv organised by Opposition Platform — For Life. During the protest, there was a performance in which aman in a mask with the face of George Soros dragged around a woman dressed in traditional Ukrainian clothing (who represented Ukraine). Illya Kyva, an MP from Opposition Platform — For Life, freed her and said that "Soros has to be kicked out of Ukraine." This performance can be seen in this video.

"Ukraine is a battlefield in war between Russia and the West"

● Russian website Anna-News wrote that the U.S. has an "anaconda-loop plan" for a future war against Russia. According to the article, this plan foresees further destabilisation in Donbas, Nagorno-Karabakh, and Transnistria. "Ukraine's Armed Forces will be actively used in special operations against Russia," the article reads.

● Alexander Khodakovsky, the founder of the pro-Russian Vostok Battalion which has fought in Donbas war on Russia's side, stated in a commentary for the Russian website eadaily.com that "with regard to Ukraine, the global task of making it "anti-Russia" has been systematically implemented, [so as] to preserve a hotbed of tension on the near borders of our country [Russia]." "America is far away, it will not send its soldiers, but one can turn Ukrainian soldiers into mercenaries, soldiers of America,"  Khodakovsky claimed.

● Vadym Rabinovych, one of the leaders of the pro-Russian Opposition Platform — For Life party, declared on ZIK that Ukraine's government "wants to turn Ukraine into an arena of war between the West and Russia on Ukraine's territory so that we would be sitting in cellars under bombshells while others makes deals on military bases";

● Oleksandr Lazariev, a political commentator who often speaks on Medvedchuk-controlled TV channels, argued on NewsOne that the U.S. and NATO see Ukraine as "Russian backdoor" and that "they will never let us [Ukraine] join their ranks."

"The West won't help Ukraine to deal with coronavirus pandemic; only Russia can do this"

● Russian news website RT wrote that "Ukraine is left entirely without a vaccine, since they [Ukrianians] do not want to use the Russian Sputnik V". "The West is not ready to supply them with their jabs, since vaccination of their own citizens remains a priority. At the same time, the pathetic state of science and healthcare does not allow Ukraine to create its own vaccine," the article reads.

● Oleksiy Yakubin, a Ukrainian political commentator, argued in an interview with ukraina.ru that Ukraine will not use Sputnik V due to "instructions from Washington" and "interests of Big Pharma lobbyists who see Ukraine as a target market for their vaccines." Strangely, this message contradicts the previous one: if Ukraine is left without a vaccine because the West does not want to supply vaccines to Ukraine, why do Big Pharma lobbyists want to keep Ukraine away from Sputnik V? Do they want to supply their vaccine to Ukraine, or do they not?

● Vadym Rabinovich, one of the leaders of Opposition Platform — For Life, asserted on ZIK that Viktor Medvedchuk struck a deal with Russians to provide Ukraine with Sputnik V vaccine on a first-priority basis. "But we will not take it, because it seems unpatriotic to Zelensky, Shmyhal and Stepanov. Let the people die, but they will look for other vaccines. Criminals, criminals who kill the people of Ukraine," Rabinovich said.

● Mykhailo Chaplyha, a political commentator and frequent guest of TV channels controlled by Viktor Medvedchuk, claimed on 112 Ukraine that if anything could save Ukraine from coronavirus, it's vaccination. Chaplyha further argued that the Ukrainian government should get the vaccine as soon as possible, and that Viktor Medvedchuk had already struck a deal by which Russia could provide Ukraine with vaccines. "However, the decision as to which vaccines to buy is being taken not by medics and economists, but by the U.S. Embassy, Sorosiata and other talking heads," Chaplyha argued.

The story of the blocking of Medvedchuk-controlled TV channels is hardly over. Detector Media reports that the management of Novyny media group is already planning to launch a news information TV channel which would be co-owned by all the employees of 112 Ukraine, NewsOne, and ZIK. This way, the channel would avoid the sanctions against Taras Kozak.

After the shutdown of 112 Ukraine, NewsOne, and ZIK, the channel NASH, another Ukrainian TV news network, became the mainvehicle of pro-Russian and anti-Western messages in the country. It is owned by Yevhen Murayev, a former member of the Opposition Bloc and the leader of Nashi political party, which has a clear pro-Russian orientation. Murayev's position is very much reflected on the information policy of his channel. Murayev himself regularly voices pro-Russian and anti-Western narratives on NASH's broadcasts, and the channel also hosts numerous political commentators from Medvedchuk's sphere of influence.

According to a study by Vizeum Ukraine, NASH experienced its biggest ratings boost in history after Medvedchuk's channels were shut down. It rose from  seventh place among information TV channels on February 2 to second on February 3. It trails only the Priamyi TV channel which is allegedly owned by Petro Poroshenko, former President of Ukraine. 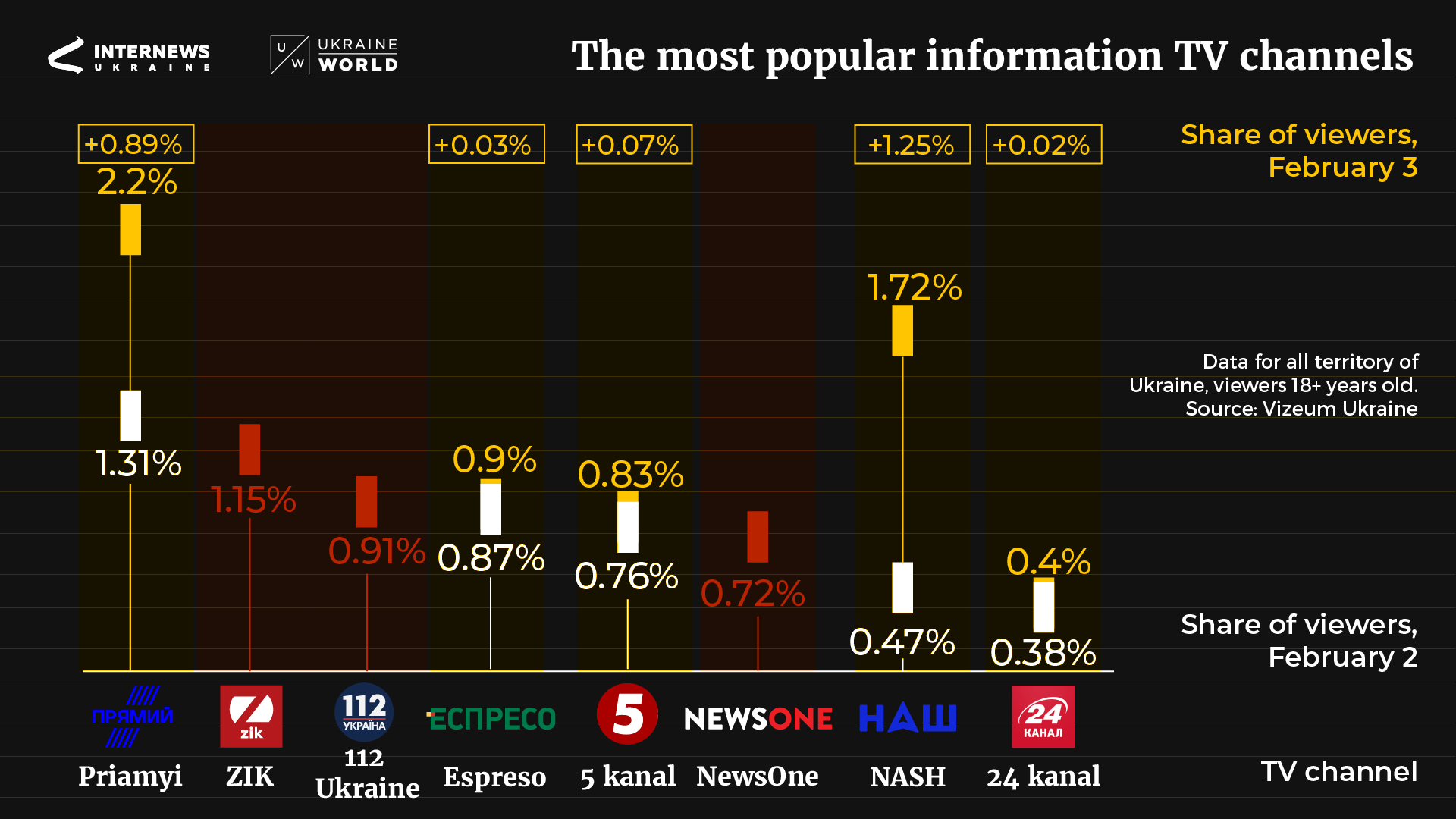 Thus, it is likely that pro-Russian opinion leaders will focus on NASH to share their messages. It will not be shut down anytime soon. Ukraine's culture minister Oleksandr Tkachenko stated in an interview for Obozrevatel that law enforcement agencies do not have documents that would justify the application of sanctions on NASH like those applied to the Kozak-Medvedchuk media group. Ukrainian audiences with pro-Russian views are also likely to watch this channel in the future, at least until Medvedchuk makes some kind of a comeback.

Read a new issue of bi-weekly newsletter with monitoring of Russian activities and influence in Belarus to know more.
VIDEO
January 13, 2020