April 24, 2019
The political plan of President-elect Volodymyr Zelenskiy is largely unknown. Will his presidency be as unique as his rise to power? 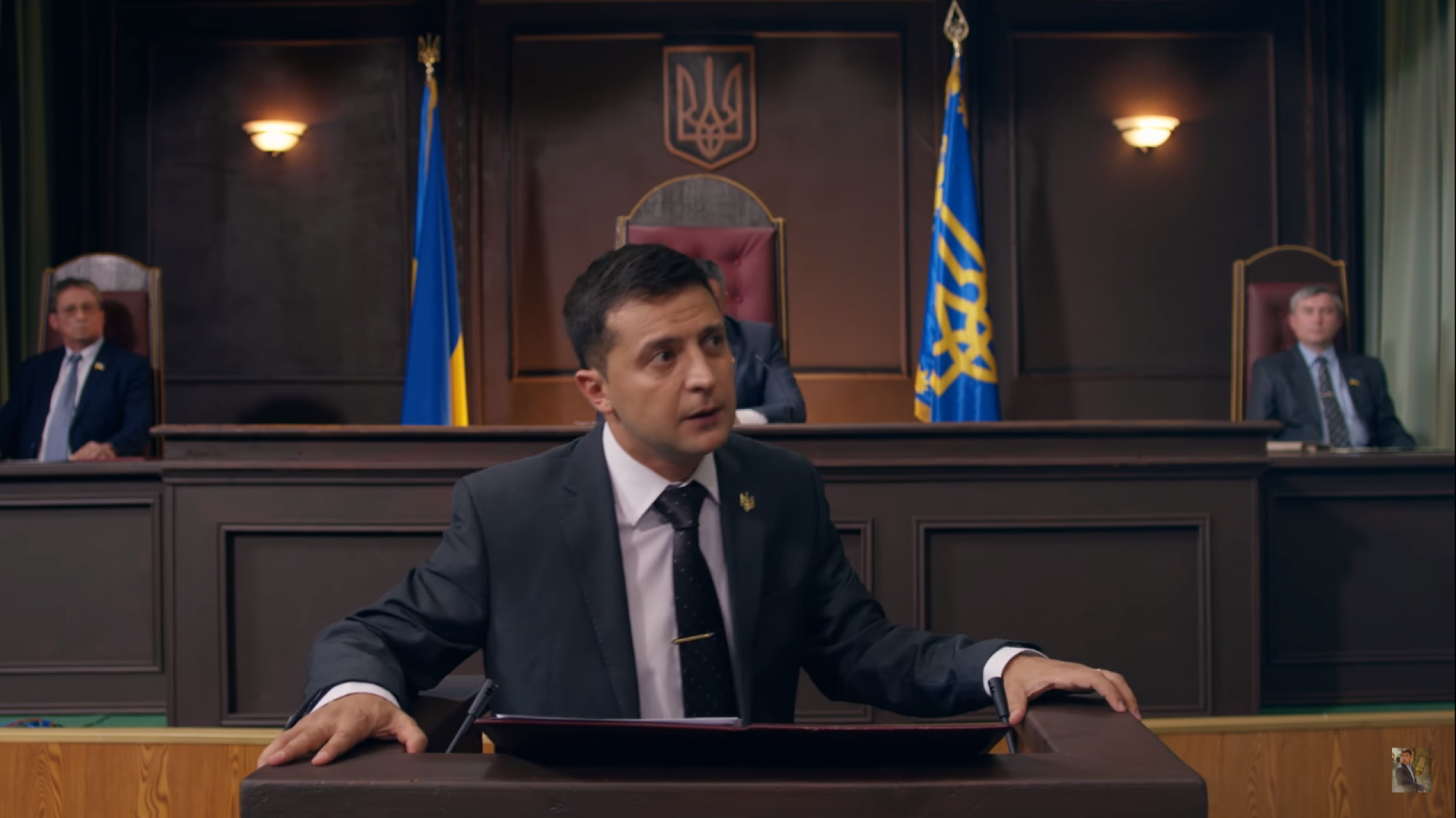 In one of the final moments of the debates that took place last Friday in Olympiyskiy stadium in Kyiv, incumbent President Petro Poroshenko started singing the Ukrainian national anthem with his hand near his heart. His opponent, comedian and actor Volodymyr Zelenskiy, was bumptiously smiling to his fans with his fingers showing a victory sign, more like a movie star than a nation’s leader.

Later Zelenskiy joined the singing of the anthem; but the episode showed the difference between the two candidates.

Poroshenko was playing a father of the nation and showing a major focus on national identity and security, in the moment when Ukraine has been a target of Russian military aggression since 2014. Zelenskiy was instead playing an ironic, post-modern showman with an assault on Poroshenko’s five-year presidency.

The idea of holding political debates in a crowded stadium was one of Zelenskiy’s most successful campaign moves. He challenged Poroshenko to the debate in a viral video two weeks before the run-off. And this put Zelenskiy in a better position: as a showman, he knows how to make thousands of people cheer or boo. Turning politics into a show and merging the line between politics and entertainment was Zelenskiy’s key strategy, which may spill over to other countries as well.

Poroshenko’s slogans aimed at uniting people into a group, mobilising them in a fight against an external enemy (Putin’s Russia). Zelenskiy’s memes were ironic, they empowered individuals in their capacity to laugh and reject – mostly the internal enemy (corruption).

Poroshenko’s tactic was to stress the feeling of community among Ukrainians while Zelenskiy’s tactic was to empower individuals in their protest feelings. By merging politics with entertainment, and a political campaign with marketing, the Zelenskiy campaign became a symptom of a new type of populism, “populism 2.0”. For decades, Ukraine has been a country for populist politicians, whose tactics were simple: promise as many utopian things you can imagine and then forget about them the day after the election.

Zelenskiy was different. He did not promise much. One of his “memes” was “no promises, no excuses”. But he tried to show himself as a simple fellow close to the people. Many people voted for him as they vote for singers or dancers on shows like “Ukraine’s Got Talent”, just because they like him, or they were like him, not because they understand or support what he is going to do politically.

“Populism 2.0” is a new post-modern turn, when policy is erased from political debates.

We still do not know what Zelenskiy’s major policies would be and this is the most risky thing in a country that can be so easily destabilised from the outside. Yet, importantly, the Poroshenko-Zelenskiy battle did not affect values or geopolitics. Both candidates say Putin is their enemy, and both declare they want to bring Ukraine closer to the EU. 50 per cent of Zelenskiy’s voters and 60 per cent of Poroshenko’s voters are openly pro-European.

What makes them different, however, is their vision of Ukraine’s national project. Poroshenko represents a large part of Ukrainian society that believes that the “liberal” European project and “national” Ukrainian project (striving to revive Ukrainian culture from centuries of oppression in both the Russian empire and Soviet Union) coincide, as they have one enemy: Soviet legacy and Putin’s Russia.

Zelenskiy’s voters might have a different idea. He comes from Kryvyi Rih, in the industrial south-east of Ukraine. In all elections since independence (except for post-Maidan 2014), this region had supported pro-Soviet or pro-Russian candidates. Since then, however, things have changed. Zelenskiy voters may be mostly Russian-speakers, but are also pro-European (though some of them are still pro-Russian). They feel uncomfortable with the Ukrainian cultural project but no longer feel themselves part of the political “Russian world” (an anti-western idea saying that Russia is a different civilisation). They can be less afraid of security challenges than Poroshenko supporters, and more willing to accept quicker changes and modernisation. They may also be alright with Russian mass culture. Perhaps, they could agree with former President Leonid Kuchma’s famous book Ukraine is Not Russia; but they still might not have an answer as to what Ukraine is.

Zelenskiy is therefore a black box. He is a symptom of a new era when entertainment merges with politics and when the most successful campaign strategy is a popular TV series and viral online videos.

His voters are very different as they are a result of multi-faceted and targeted marketing. But he is also a symptom that earlier pro-Russian parts of Ukraine gradually become pro-European, still feel uncomfortable with the Ukrainian national project.

This can make Zelenskiy’s presidency a “Trojan horse” in both ways. It can be a way of “Europeanising” earlier pro-Soviet and pro-Russian mindset; but it can also be the way for a silent return of Russian mass culture and political culture back, under a “pro-European” and “modernising” mask.

Putin’s Russia will most probably play “carrots and sticks” with the new president. Zelenskiy is obviously much more comfortable for the Kremlin than Poroshenko – just because he has much lesser sense of community and nation-building than Ukraine’s incumbent president. Some Russian politicians and media were already euphoric about Zelenskiy’s win in the first round and Zelenskiy fan pages welcomed Russian support. Zelenskiy did not react to this euphoria though, and he keeps repeating that Putin is his enemy.

Whether the Russians will be successful and where Zelenskiy will turn, depends very much on two factors: how strong civil society pressure inside Ukraine is and how strong international pressure from the outside will be.

The key thing is to continue the reforms and progress closer to the European Union and NATO, seek peace in Donbas but not on Russia’s terms, develop Ukrainian political and cultural project after centuries of repression and keep pressure on Russia for annexing Crimea and continuing military actions in Donbas. These are the red lines the new president should stick to.

This article has been first published at New Eastern Europe.

Host Volodymyr Yermolenko welcomes Kostiantyn Kvurt, a well-known Ukrainian media expert and the head of board of Internews Ukraine, one of the leading Ukrainian...
VIDEO
April 19, 2019