November 4, 2020
The Russian occupational ‘government’ in Crimea has been persecuting and imprisoning Crimean Tatars since its illegal annexation of the peninsula in March 2014. As the human rights situation at the peninsula has deteriorated, no Crimean Tatar, young or old, is safe. 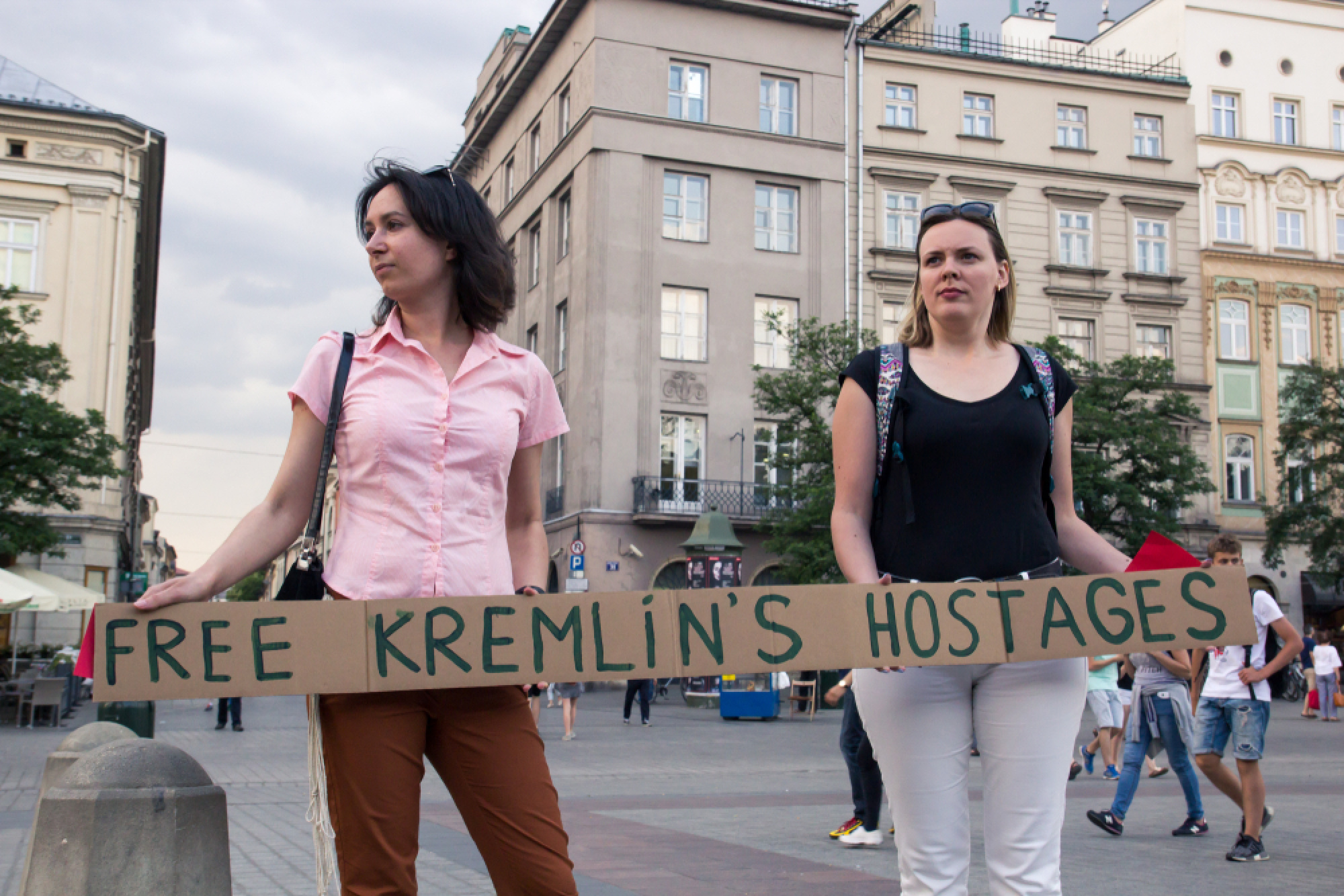 July 24, 2020 was a terrible day in the Crimean village of Strohanovka. Musa Suleymanov, a 3-year-old child, disappeared from a playground near his house. Thousands of people went looking for him the next day, but found nothing. On the next day, the boy's dead body was found in a nearby drainage pit. The search partieshad checked it first on July 24 and found it closed.

According to the official story from the Russian 'police' in Crimea, this was a tragic accident. However, the Mejlis of the Crimean Tatar people does not agree. Refat Chubarov, the Chairman of the Mejlis, argued on Facebook that "the place where Musa's body was found and circumstances around the boy's death raise questions which must be answered after he is buried."

Musa Suleymanov was the youngest son of Ruslan Suleymanov, a civic journalist with Crimean Solidarity who was detained on March 27, 2019, along with 22 other activists in the so-called "second Hizb ut-Tahrir case." His elder brother Eskender Suleymanov was arrested three months later. Despite being held in pre-trial detention facilities 20 minutes away from Strohanovka, Ruslan Suleymanov was not even allowed to come to his son's funeral on July 27.

Crimean Tatars have only been involved in peaceful movements. Russia's FSB labels them as terrorists in order to hinder international support for Crimean Tatars and the Majlis

The majority of Crimean Tatar prisoners of the Kremlin" are accused of being members of in Hizb ut-Tahrir---an international, pan-Islamist political organization which is legal in most countries, including Ukraine. It has been banned in Russia since 2003, despite not having done anything extremist or terroristic. "Crimean Tatars have only been involved in peaceful movements. Russia's FSB labels them as terrorists in order to hinder international support for Crimean Tatars and the Majlis," says Alim Aliev, the manager of The Crimea House, a Kyiv-based Crimean Tatar community organization. Meanwhile, the reality is quite the opposite. The Kremlin would prefer violent resistance which could be crushed. However, Crimean Tatars have a long record of responding to Russian repression with non-violent resistance. Crimean Tatars started a grassroots non-violent struggle against the Soviet Union in 1956 in the post-Stalin era, and they continue to base their strategy of nonviolent resistance upon this experience.

In this case, Ruslan Suleymanov's only "crime" was his support of other Crimean Tatars and Ukrainians imprisoned by Russia. On 21 February 2017, he was one of 10 activists jailed for five days merely for standing and streaming information online the raid upon the home of Marlen Mustafaev, another activist jailed for social media reposts. In October 2017 he was jailed and fined once again for peacefully protesting with a placard reading "In 1944 they deported us, now they imprison us."

Ruslan's placard referred to Stalin's deportation of Crimean Tatars from Crimea beginning  on May 18, 1944. More than 240 thousand people were forced to leave their homes and were deported to the Central Asian republics of the USSR. Because of the success of the widespread nonviolent resistance of Crimean Tatars inside the Soviet Union and the support of their diaspora,, they returned to the peninsula in 1989. Russia's annexation of Crimea in 2014 in many ways repeats the events of 1944, as more than 20 thousand Crimean Tatars have been forced to flee their homes once again for refuge in mainland Ukraine.

Russia's annexation of Crimea in 2014 in many ways repeats the events of 1944, as more than 20 thousand Crimean Tatars have been forced to flee their homes once again for refuge in mainland Ukraine

Those who could not or did not want to leave have found themselves in a no man's land for human rights. As the Kremlin has a long history of conflict with Muslims in Chechnya, Tatars were often automatically perceived as terrorists. Thus, the Russian security services have had license from Moscow to openly detain and prosecute any person they saw fit. FSB officers have not allowed Tatars access to lawyers during searches, and agents often use force against Crimean Tatars during arrests.

Server Mustafaev, who was a coordinator with the Crimean Solidarity movement, was detained by the Russian security services on May 21, 2018. He was one of the first people who live-streamed the searches, arrests, and court hearings of Crimean Tatars on social media. Just like Ruslan Suleymanov, Mustafayev was accused of participating in a local cell of Hizb ut-Tahrir and was kept in pre-trial detention at a jail in Simferopol. Like many other Crimean Tatar prisoners, Server Mustafayev has undergone a compulsory examination in a psychiatric hospital. The Crimean Solidarity movement considers Mustafaev's arrest a form of "persecution" and  "intimidation of society as a whole."

See also: What The World Should Know About The Ukrainian Prisoners Of The Kremlin, And Why

Another name to know is that of Crimean Tatar human rights activist Emir-Usain Kuku, who was arrested in February 2016 for allegedly belonging to Hizb ut-Tahrir. Prior to his detention, Kuku was severely beaten by FSB operatives for his work as an activist. For three years, Kuku was held at a pre-trial detention centre in Rostov-on-Don, Russia, and charged with the "preparation of actions aimed at a violent seizure of power, or forcible change of the constitutional order." On November 12, 2019, Russian judges from the Southern District Military Court in Rostov sentenced Kuku to 12 years in prison. On June 25, 2020, the Military Court of Appeal in Vlasikha affirmed the sentence.

While speaking in the courtroom on June 25, Emir-Usain Kuku declared, "[w]e were convicted for declaring our right to live in Crimea, in the land of our ancestors, in harmony with Islam, because I am a Crimean Tatar, a Muslim, and I don't plan to accept the evil and injustice ruling on my land." Kuku's words describe very clearly the torment that Crimean Tatars have had to endure under annexation. They have been persecuted in their own land with little chance of help, left at the mercy of invaders.

These stories are only a few among the many horrible cases of illegal detention and imprisonment. As of August 2020, 100 Crimean Tatars and Ukrainians are still illegally imprisoned in Crimea and the Russian Federation. You can find a complete list here.

You can also get to know more stories of "Prisoners of Kremlin" via the #PrisonersVoice project, a mobile application with augmented reality technology. In this app, former political prisoners Oleg Sentsov, Oleksandr Kolchenko and Volodymyr Balukh tell their stories and reflect on their imprisonment. You can also use this app to turn your room into a prison cell via AR and experience political prisoners' reality for yourself.

Over the past decades, Russian cinema has served not only as “art,” but as a tool of propaganda which dehumanized Ukraine and the West, preparing Russian citizens...
VIDEO
October 30, 2020

Crimea has a rich history and diverse culture. However, since Russia’s illegal annexation in 2014, Crimea’s unique heritage is jeopardized. Our new video produced...