July 1, 2019
Maryinka, Sloviansk, Kramatorsk, Donetsk, and other places from modern-day Donbas military chronicles have been the territories where various cultures and political systems met from the XVI century. 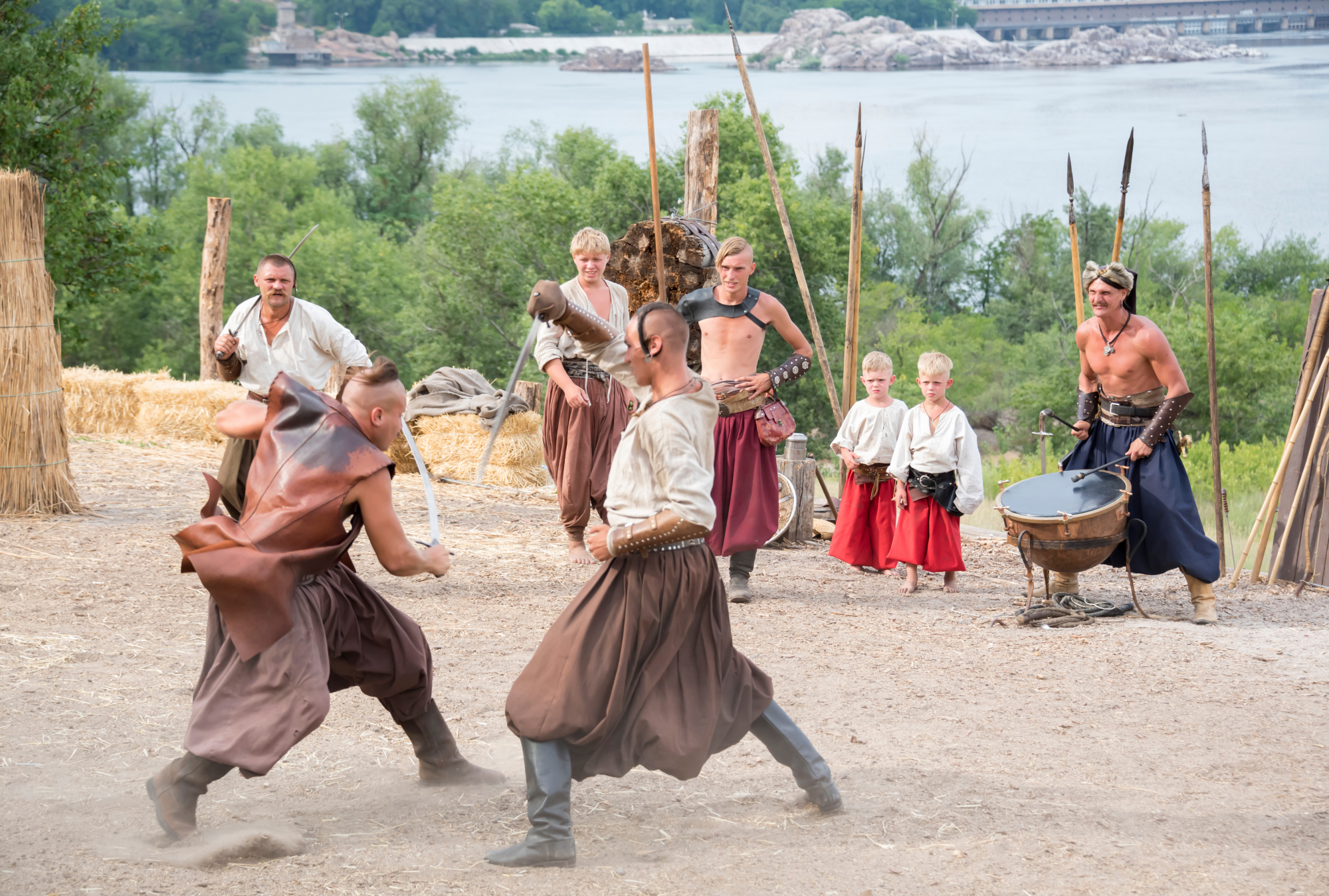 Nowadays, the Ukrainian Army defends territories in Eastern Ukraine like their predecessors, the Cossacks (read more), did in XVI-XVIII centuries. At that time, Donbas was an almost deserted place between various cultures and political structures: Orthodox Moscovy, Catholic, Protestant and Greek Catholic Polish-Lithuanian Rzeczpospolita, the Islamic Ottoman Empire, and the Crimean Khanate.

In fact, the name Donbas appeared only in the XIX century (read more). It means "Donetsk coal basin", and this territory is not absolutely the same as Donetsk and Luhansk Regions. The basin is also partly located in Dnipropetrovsk Region and in Russia. But in this article, for simplification, we call Donbas the territory of Donetsk and Luhansk Regions.

Wild Steppe warriors: from the Scythians to Cossacks and Europeans

Historically, Donbas was part of the Wild Steppe in the south and east of modern Ukraine. In ancient times, it did not have a clear boundary. Cimmerians, Scythians, Sarmatians, Huns, Pechenegs, Polovtsi , and other tribes raided these lands.

This Wild Steppe was not part of Kyivan Rus; the Slavs appeared later there.

In the XIII century, after Batu Khan founded the Golden Horde , a division of the Mongol Empire, it invaded the south of modern Ukraine. 200 years later, the Crimean Khanate was created there. The Tatars roamed with their herds mainly near the northern Black Sea and Azov Sea coasts, while the vast territory between the rivers Dniester and the Don remained uninhabited. Therefore, it received the name Wild Steppe, or simply Steppe.

The word "Ukraine" first appeared in Medieval times to describe the borderland between inhabited forest and forest-steppes, and nomadic steppes.

In XVII-XVIII centuries, Slobidsky and Zaporizhzhian Cossacks colonized the Wild Steppe. After Catherine II, the Empress of Russia, expropriated these lands from the Cossacks in 1775, refugees from other countries began to settle there – Serbs, Croats, Bulgarians, Montenegrins, Poles, and Moldovans. As a result, this area was called Slavic Serbia. The task of the newcomers was the same – to protect the borders of the Russian empire.

The first fortified settlements on the Donbas – Bakhmut, Slovyansk, Mariupol – were founded by Zaporizhzhian Cossacks in the XVII century. But more massive Ukrainian colonization took place in the XVIII century when sections of the Cossacks led by Hetman Mazepa sided with Swedish King Charles XII and lost the war against Russia in 1708-1709. At that time, they created the New Sich , one of the territorial units of which – Kalmius (Kalmiuska) Palanka – was situated on the lands of modern-day Donbas.

Year by year, more and more Cossacks came from Kharkiv's Sloboda and the Zaporizhzhian Sich, and the Wild Steppe turned into an Eastern European analogue of the American Wild West with a permanent war of all against all. Donbas was a kind of "Wild East" for Ukrainian lands, in a way similar to the Wild West in American History.

In 1657, after the death of Cossack Hetman Bohdan Khmelnytsky, a civil war began in the Hetmanate, which provoked a wave of refugees to the Wild Steppe. The majority of such settlers accepted Russian citizenship but, at the same time, they kept their old traditions and way of life. Two such suburban Cossack regiments, Izium and Ostroh, included the northern regions of modern-day Donetsk and Luhansk Regions.

At the same time, on the territory of modern Donetsk Region, the cities of Bakhmut, Mayaky, Thor (currently Slovyansk), and Rayhorodok, which became centers of the Izyum Regiment, arose in the inter-valley of the Siversky Donets and Torez.

On the territory of modern-day Luhansk Region, along the Aidar River, the largest New Sich settlements were Bilolutsk, Starobilsk, and Zakotne. Cossacks also lived on the territories of what is contemporary Luhansk itself, Slovianoserbsk, Krasnyi Kut, Lysychansk, and the city of Horlivka.

Most of their population consisted of people of various social groups, who moved from Podillya, eastern Bratslavshchyna, and right-bank Kyiv Region.

Cossacks as free-fighters, Kazaks as invaders

There is a myth created by Kremlin propaganda, that states that the Donetsk and Luhansk Regions are historical lands belonging to Russian Don Cossacks (Kazaks), and not Ukraine.

In reality, only a small part of these areas once belonged to the Don Kazaks. The Donetsk and Luhansk Regions consist of 36 districts in total. Only 10 of them are fully or partially located on Don lands – Taganrog district and others.

In fact, modern Donetsk and Luhansk Regions are located predominantly on the eastern outskirts of the former Katerynoslav and Kharkiv provinces. In 1917, according to the Central Rada III Universal, these provinces belonged to Ukraine. The Bolsheviks also considered them to be part of Soviet Ukraine.

It is important to know that Don Cossacks (Kazaks), who are currently fightingin the Donbas on the side of the so-called "Luhansk People's Republic", are not free warriors but a part of modern Russian regular military forces.

According to Russian laws, they fully obey the orders of the Head of State, namely Vladimir Putin. As of now, there are 11 Kazak troop unitsin Russia, which function as government-controlled structures. There is also a law of the Russian Federation on the state service of Russian Kazaks. 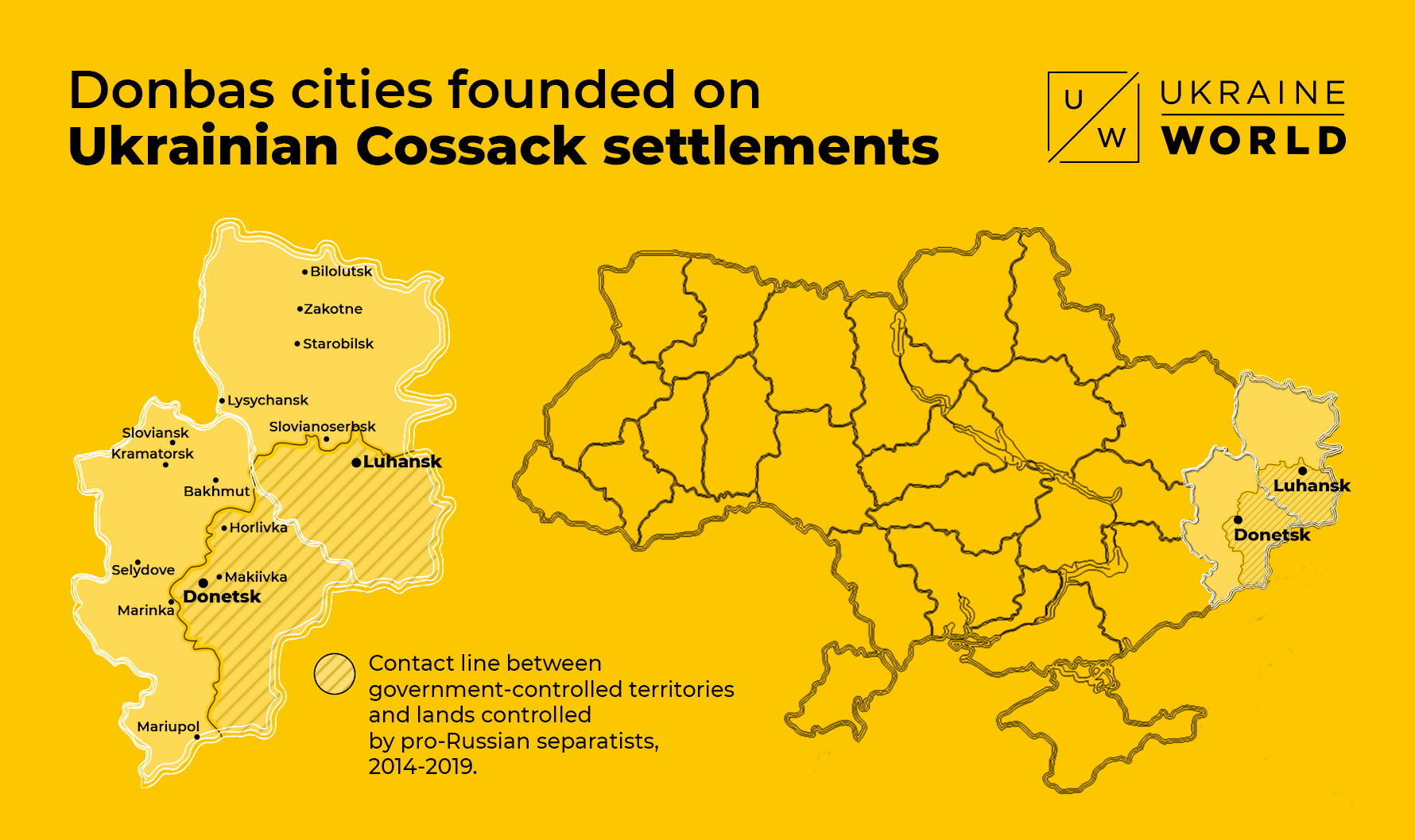 Bakhmut. As a complete settlement, it was founded by Cossacks of the Izyum Sloboda regiment in 1680-1690. It was an important salt mining point.

Donetsk. In 1779, Cossack Colonel Yedokym Shydlovsky founded the first settlements, Oleksandrivka and Krutoyarivka. Today, they are part of the city of Donetsk.

Horlivka. Initially, the Cossack settlements of Hosudariv Buerak, Mykytivka, Zaitseve and others arose on this territory. Now they are part of Horlivka. The first name of the city was Hosudariv Posad.

Kramatorsk. The mass migration of Cossacks on its territories officially started in XVIII century. They came from the Izyum regiment. The name is probably a word combination of "Krom" and "Tor" - the border of the Thor lands.

Lysychansk. In XVIII century, on its territory, there were two winterers of the Kalmius Palanka of the Zaporizhzhian Army - "Fox Beam on the Donets" and "Vysche [Upper] on the Donets".

Makiivka. The first settlement, a winterer (zymivnyk), on its place appeared in 1690. It was founded by Cossack Makiy (or Makiiv).

Maryinka. In 1704, on both sides of the Gnilusha River, at the site of this settlement, there were several winterers and farms of the Zaporizhzhian Cossacks.

Mariupol. The settlement at Kalmius's beal was founded in the XVI century by Zaporizhzhian Cossacks as a guard post for Domakha to protect their winterers, crafts, and routes from attacks by Crimean Tatars.

Sloviansk. In 1676, in order to protect themselves against Tatar raids, the Cossacks built the castle of Thor on the territory of the future city. Thor belonged to the Izumsky Cossack regiment.

Starobilsk. Bielska Sloboda was founded in 1686 by Ukrainian Cossacks from the Poltava Region on the territory of the Ostrohozk Sloboda Cossack Regiment. It was laterrenamed into the city of Starobilsk.

The fightfor Donbas continues in 2019. Modern-day Ukrainian Cossacks refuse to give up the territories that Ukrainians won with their blood through the centuries.

Tetyana Matychak for UkraineWorld
Next article

Enthusiastic pupils from a so-called "green school" in Ukrainian village sort waste and in this way contribute to the preservation of the environment. Our new grassroots...
Ukraine
January 25, 2021

Ukraine reopens today after a 17-day lockdown. The country returned to adaptive quarantine measures that were in place before.