April 30, 2019
Ukrainian football, which managed to survive shortly after the collapse of the Soviet Union, embarked on a new model of development beginning from the 2000s. The start of the new millennium in Ukrainian football was marked by wealthy businessmen and oligarchs buying or gaining control over the clubs, thereby reflecting the developments that had been occurring in the socio-political and economic life of the country. 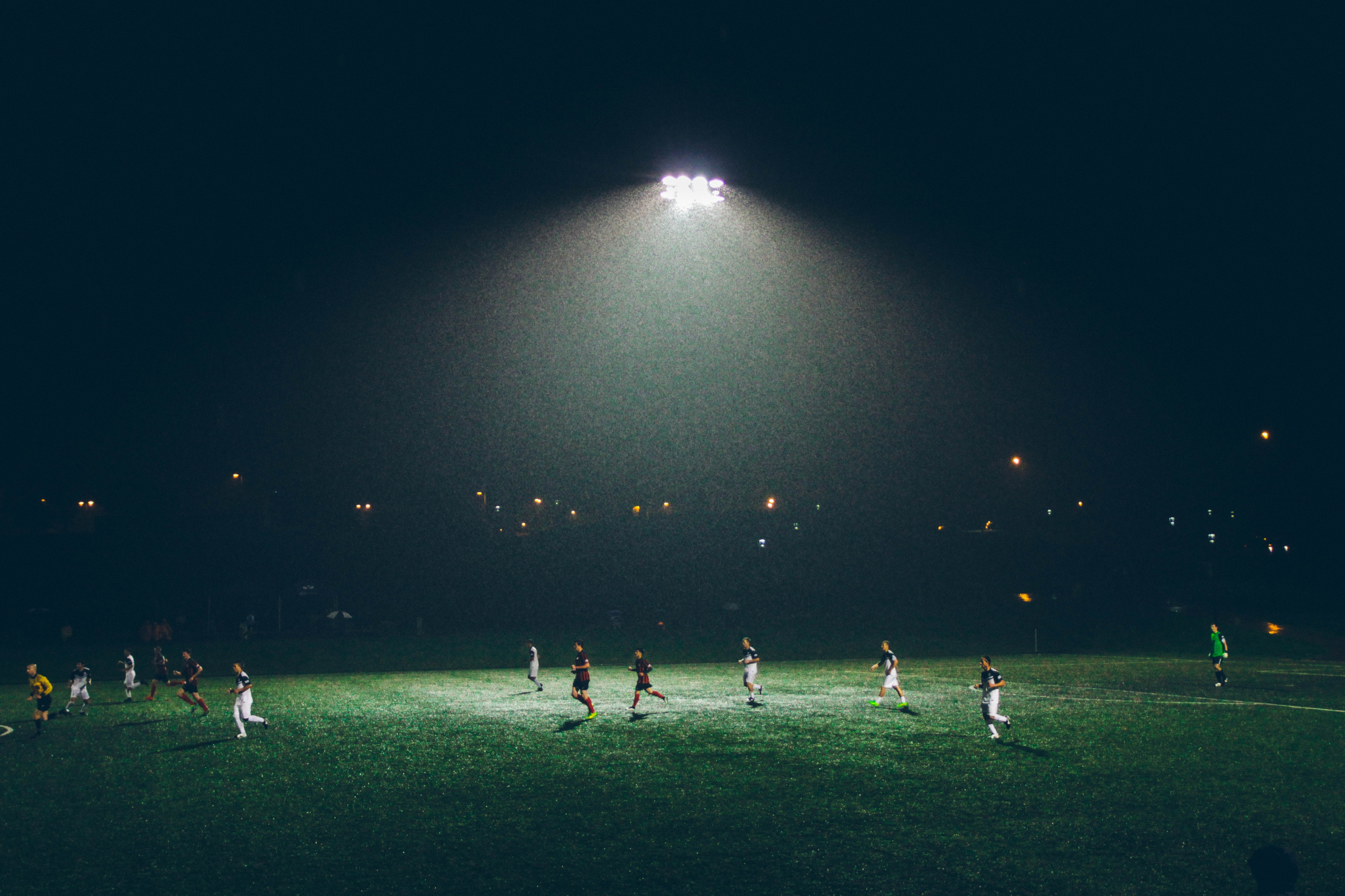 Ukrainian football has become a favourite toy of Ukrainian oligarchs. On the one hand, it gave a short-term boost to football with the impression of a flourishing future; but, on the other hand, it has led to disastrous consequences, with many clubs ceasing to exist, a reducing in the number of clubs able to perform in the national tournament, the Premier League, and huge fall in attendances at games, among other things. So, when you see football declining, this means oligarchs have less money than before.

In the early 1990s, Dynamo Kyiv, the most decorated Ukrainian football club, came  under the control of Hryhoriy Surkis, a Ukrainian businessman and politician, and then passed to his younger brother, Ihor Surkis. Rinat Akhmetov, reportedly the richest man in Ukraine, laid his hands on Shakhtar Donetsk FC carrying his team to the biggest success in the history of Ukrainian football in independent times -- victory in the 2007/2008 UEFA CUP tournament.

Other oligarchs have taken the path of these two: Oleksandr Yaroslavskiy, a Kharkiv-based business tycoon, bought Metalist FC from the same city;  Ihor Kolomoyskiy, one of the most scandalous oligarchs, became the owner of Dnipro FC, while allegedly keeping the financial influence over the Kryvbas (Kryviy Rih), Volyn (Lutsk) and Arsenal (Kyiv) football clubs. Other clubs have also fallen under the control of oligarchs. Petro Dyminskiy, a Lviv-based businessman, became the president of Karpaty (Lviv), Kostiantyn Zhevaho, a Ukrainian billionaire, became sponsor of Vorskla (Poltava), Yevhen Heller, a businessman and former MP, started financing Zorya (Luhansk), etc.

Because of this, football has turned into a game of oligarchic nature, with clubs playing the role of toys in the hands of business tycoons and being overwhelmingly dependent on the financial injections of their owners.

Such a state of play reflects developments within the country. The oligarchic and clannish model that has been prevailing in Ukraine's economic and socio-political life has moved to national football. Clubs have become a tool to "do a little muscle-flexing" and play political games between competing rivals. Moreover, they also served, in some cases, as a source to partially legalize revenues invested in football, which had been obtained while committing allegedly corrupt activities. Successful clubs have also showed that there is a lot of "free money" in the economy that oligarchs invested into sports entertainment.

On the one side, backed by some local successes on the international arena, the rising flow of well-skilled foreign players coming to Ukraine and increase in the number of fans coming to games, it provided an imaginary conviction that Ukrainian football has become as wealthy as European football.

But, on the other hand, this model showed its key weakness too: total non-resilience amid economic and socio-political hardships that the country may face and great losses that the moguls who own clubs may sustain.

This trend has become most evident after Euromaidan and the start of Russia's war against Ukraine. The harsh economic situation in the country has hit oligarchs as well: they massively began to give up on their football-related commitments by drastically cutting spending on the clubs they owned or even abandoned them. In such harsh circumstances, oligarchs realized that their clubs had become "suitcases without a handle". As a result, just three years on from 2014, and 20 professional clubs in Ukraine ceased to exist, while many others are eking out a miserable existence. Moreover, many people stopped visiting stadiums, which led to  record-low attendances at stadiums. 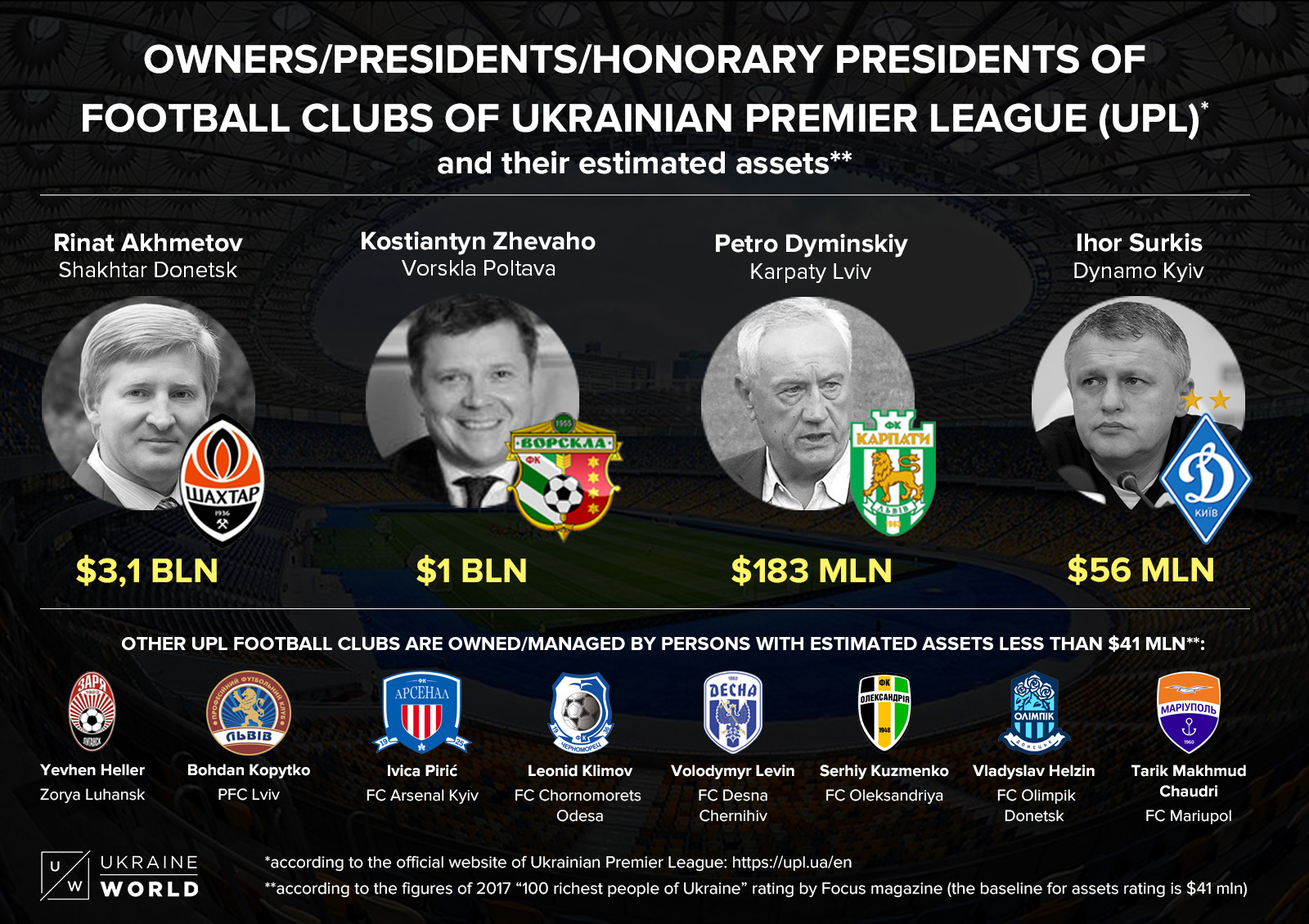 One of reasons that led to such bad consequences is that, over the years of their functioning, national clubs had failed to profit from football. Despite the fact that wealthy businessmen owned Ukrainian clubs, football has hardly developed as a business. Contrary to the Western model, where football and sports is seen primarily as a business activity, in Ukraine it was perceived, to one extent or another, as a way of competition between dissenting business and political camps.

In the West, the understanding of football as a business is common knowledge. According to the 2018 Football Money League report provided annually by Deloitte Touche Tohmatsu, revenues of the 20 most-generating clubs reached EUR 7.9 billion in 2016/2017, with England's Manchester United securing its position at the top of the rating with more than EUR 676 million revenue in 2017. By comparison, the budget for the whole Ukrainian Premier League (UPL) tournament in 2018 was UAH 13 million (approximately USD 480,000), as former UPL head Volodymyr Heninson said.

The English Premier League (EPL) has best mastered such a business model. Among the TOP-5 European football leagues, it is first in terms of revenues. In 2017, EPL's revenues came to EUR 5.340 billion, followed by the Spanish La Liga (EUR 2.899 billion) and German Bundesliga (EUR 2.799 billion). Out of the EPL's entire amount of revenue, more than half (EUR 2.910 billion) was generated by TV broadcasting contracts and EUR 1.250 billion was earned due to sponsorship deals and other commercial activities.

Thus, the Premier League remains the most intensely marketed football league in the world. The EPL has the biggest representation in the TOP-10 list of the most valuable brands, with six clubs being there, alongside 2 Spanish clubs, and just 1 German and 1 French. The marketable value of all players that play in the EPL is also record-breaking and reached EUR 8.3 billion. By comparison, the total market value of all the players of Ukrainian Premier League in 2018/2019, was according to Transfermarkt, evaluated at almost EUR 285 million.

The poor condition of national football has on many occasions been confirmed by club owners. In 2009, Oleksandr Yaroslavskiy, the then-owner of Metalist FC, admitted that his club is "a non-performing asset," saying, moreover, that there will be no possibility to make money out of national football in the next 10 years.  Nine years later, Ihor Kolomoyskiy, ex-owner of Dnipro FC, confirmed Yaroslavskiy's words, describing his former football club as a project that leads to losses. "Football [in Ukraine] has almost died," he stressed. In an interview with Viktor Vatsko, one of the most prominent Ukrainian football commentators, in early 2019 Ihor Surkis, President of Dynamo Kyiv, answering the question about the business attractiveness of the club he owns, confessed that only if Dynamo was controlled by a true businessman could it have been seen as an asset capable of generating profit.

Such a trend is confirmed by statistical data. The figures presented by a report by UEFA, the body that runs European football, shows that Ukrainian Premier League clubs suffered losses of EUR 60 million in 2017.

What is the way out

The oligarchic model of football management has been dominant in Ukraine for many years. However, the transformations that have been taking place in Ukrainian football since 2014 may finally become a game changer for the whole sector and lead to its future step-by-step revival.

Financial optimization is one of the tools that may, in the long-term, help Ukrainian football to get back on track. Denys Bosianok, a Ukrainian football commentator, even advocates making football salaries match the real situation in the country

Andriy Kovalenko, in his article for Dilova Stolytsia, predicts that full deoligarchisation and drastic changes in deeply rooted approaches of managing football in Ukraine are key preconditions for the game of millions in the country to begin getting up from its knees. This may, first of all, result in the total decadence of the professional football in Ukraine. However, in the long-run, it might open a new window of opportunities for the clubs, which, after years of stagnation, should realize that living within their means is precisely the way it should be done.

After the rehabilitation, new investors, in cooperation with local authorities and communities, as well as professional football managers, should become the force that will provide a helping hand for a club to survive and develop based on internationally-accepted business models. However, in order for this to become true, the overall economic prosperity of the country should also increase significantly. And the transfer from oligarchic and clannish model in the country's socio-political and economic life is paramount in this regard.

The German model of football management may serve as an example in this situation, subject to certain specifics that Ukrainian football has been living with for years. According to the German legislative framework, at least 51% of shareholders in a club, with some concrete exemptions, should constitute sport communities and football fans. It significantly minimizes the possibility for big moguls, including from those outside the country, to come into German football and establish control over its clubs. On the contrary, this, alongside professional football managers that are involved, provides for maintaining sound economic policy, which allows for profits to be earned from  organizing football with further investment in a club's development. Such a model has already confirmed its feasibility: the German Bundesliga ranks third is in the TOP-5 European leagues in terms of revenues it generates (EUR 2.799 billion in 2017), just slightly behind Spain's La Liga.

Thus, the evolution of Ukrainian football from the oligarchic nature of management to the business model, alongside a rise in living standards in the country, may become the factor that will change the rules of the game and contribute to football getting back on track.

While inclusion is still a wishful thinking in Ukraine, some companies are trying to change the situation by putting the idea of socially responsible business in...
PODCAST
February 26, 2020