May 26, 2020
Internews Ukraine and UkraineWorld.org publish a regular roundup of anti-Western messages in Ukraine aimed at undermining trust in democracy and in Ukraine’s integration with the EU and NATO. We publish regular weekly and monthly reports, and also provide alerts covering specific narratives when they appear 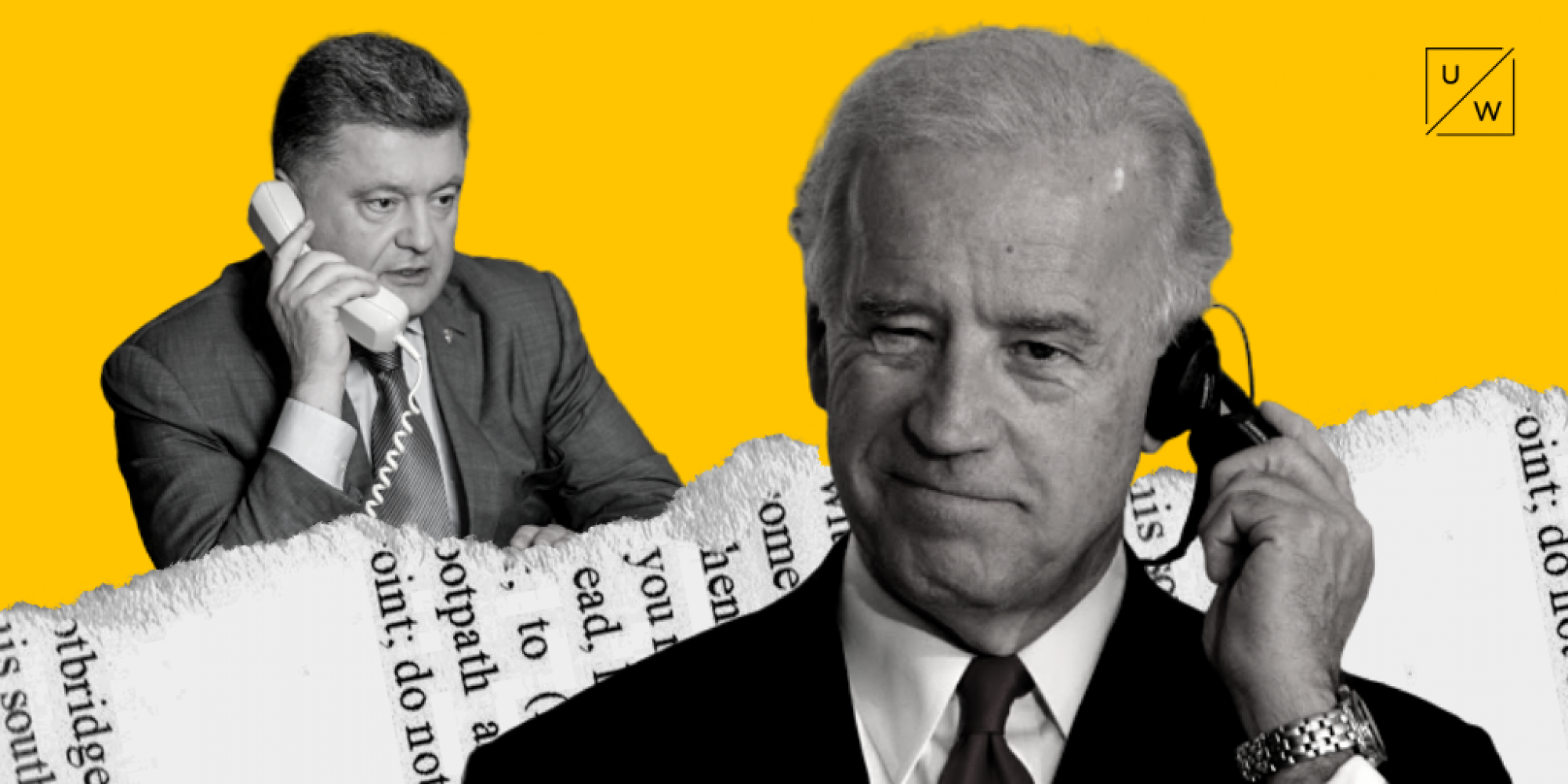 Over the period of 18-25 May, the following anti-Western narratives were the most prominent in Ukraine's information sphere:

"Ukraine should get rid of  external governance" 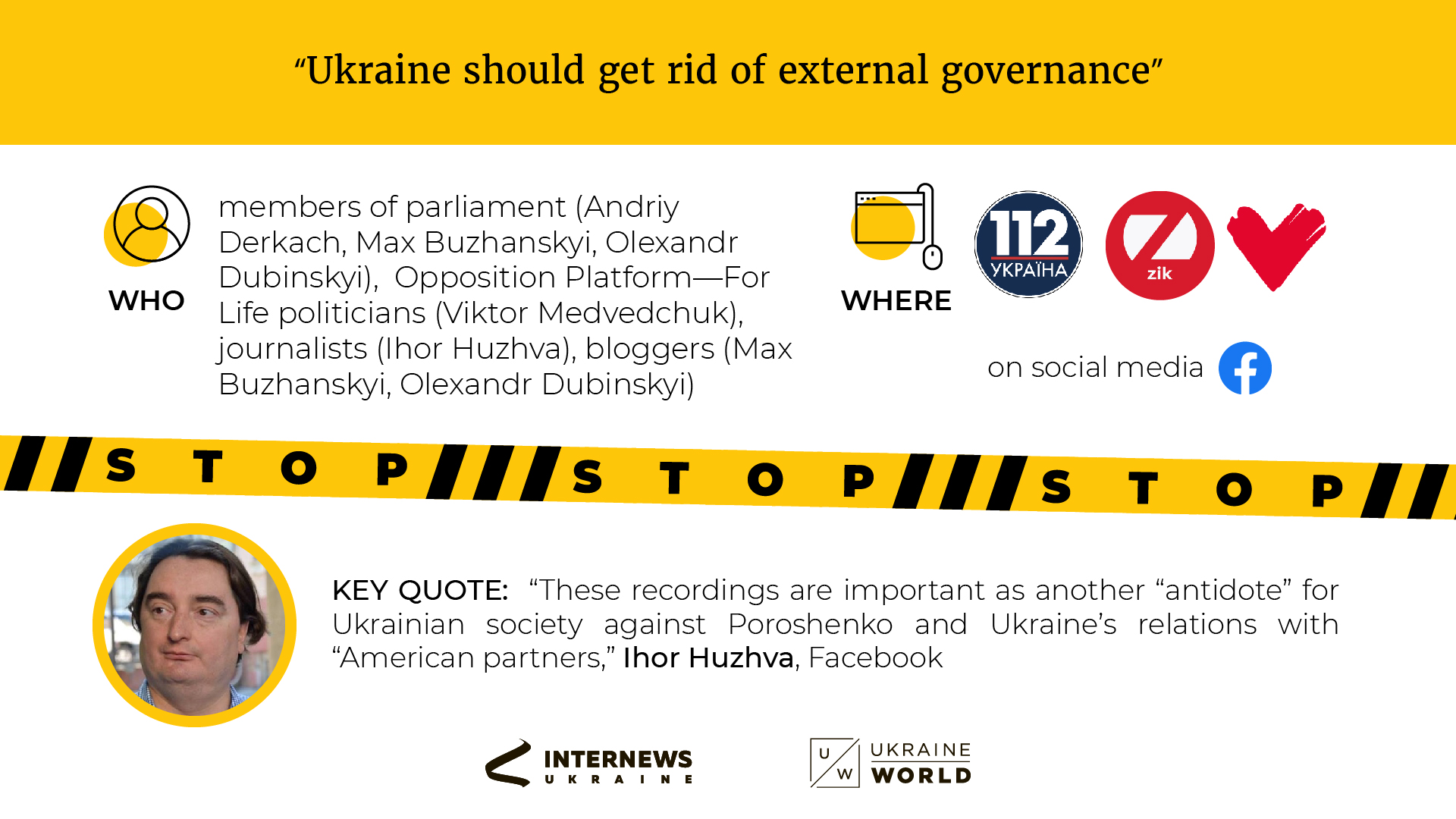 On May 19, Andriy Derkach, a non-affiliated MP, gave a press conference where he revealed excerpts of recordings of alleged phone conversations between Petro Poroshenko, Ukraine's President from 2014-2019, and Joe Biden, the Vice President of the United States from 2009-2017. On these recordings, the voices alleged to be Poroshenko and Biden discuss various issues, including Ukraine's cooperation with the IMF, the nationalisation of PrivatBank, and resignation of Viktor Shokin, Ukraine's prosecutor general from 2015-2016.  "These conversations clearly show [...] Biden was controlling Ukraine," Derkach declared during the press conference.

Derkach's press conference became the most discussed event of the week. It reignited the narrative about "external governance."  Viktor Medvedchuk, one of the leaders of the pro-Russian Opposition Platform---For Life party, released a statement calling on the Ukrainian government to "propose a plan to radically eliminate the illegal influence of the United States of America on the domestic and foreign policies of our state." According to the statement, the Ukrainian government should outlaw certain people "from holding positions in central and local executive bodies, leadership positions, or seats in the supervisory boards of state enterprises or enterprises with state capital." The people barred would include "citizens of foreign states and stateless persons; persons with dual citizenship, as well as persons working in non-governmental foundations and non-governmental organizations with funding from abroad." According to Medvedchuk, "there is a real risk of external control and management of Ukraine through them."

Ihor Huzhva, editor-in-chief of strana.ua, argued on Facebook that "the recordings of conversations between Biden and Poroshenko are the annals of external governance." He also noted that the release of these recordings is "another "antidote" for Ukrainian society against Poroshenko and Ukraine's relations with "American partners."

Max Buzhanskyi, a blogger and MP from the Servant of the People party, wrote on his Telegram channel that Poroshenko should be scrupulously questioned regarding all the events discussed on the recordings. "It should not only become clear to everyone, but should be documentarily verified, that he [Poroshenko] completely subordinated the interests of our state to the interests of another state," Buzhanskyi demanded. Meanwhile, another MP from Servant of the People, Olexandr Dubinskyi, argued on Facebook that Ukraine's Verkhovna Rada should reconsider the so-called "anti-Kolomoyskiy" banking law as the nationalisation of PrivatBank is what Biden wanted. Both MPs are allegedly close to the oligarch Ihor Kolomoyskiy.

"Ukraine is just a pawn in geopolitics" 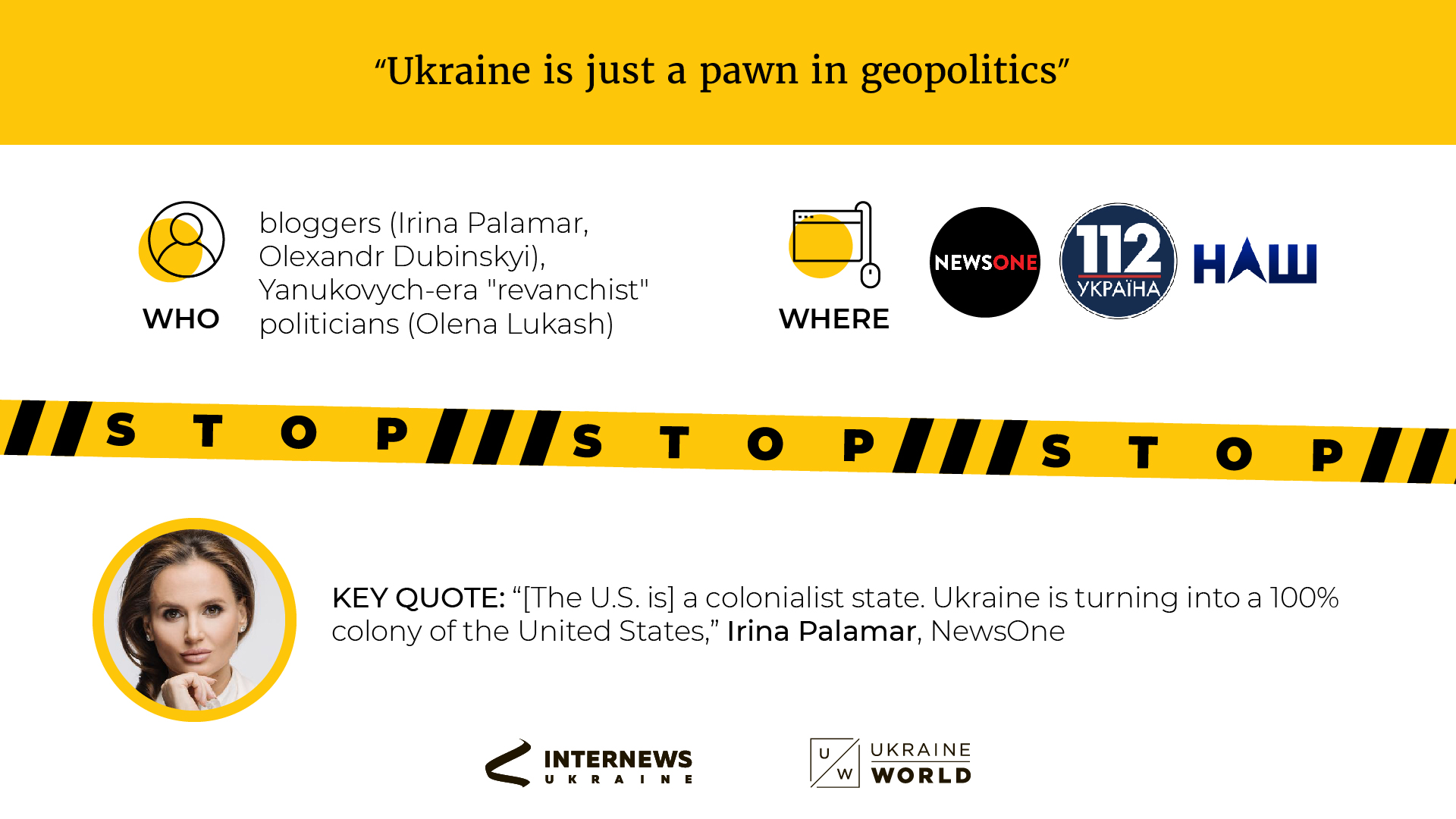 Another narrative reinvigorated by alleged recordings of conversations between Biden and Poroshenko is that Ukraine is being toyed with by the U.S. for their geopolitical gain.

Irina Palamar, head of the Ukrainian Stock Breeders Association and blogger, decried during the Ukrayinskyi Format talk show on NewsOne that "Ukraine is merely a bargaining chip in a big geopolitical game." "These recordings did not appear out of the blue. It's the plan of the [American] Republican Party. They have their own game, a big fight for the throne of that huge state," she insisted. Palamar also argued that the U.S. is  "a colonialist state" and "Ukraine is turning into a 100% colony of the United States."

This message was also voiced by Olena Lukash, a former member of the Party of Regions and  Justice Minister in the government of Mykola Azarov, on 112 Ukraine. "Ukraine is being used as fodder during every electoral campaign in the U.S. Sadly, Ukrainian politicians have agreed to become a fig-leaf for the problems of Republicans and Democrats," Lukash said.

Olexandr Dubinskyi, a blogger and MP from the Servant of the People party, hinted on NASH TV that "external governance" drove a wedge between Ukraine and Russia. "The system of a unipolar world for Ukraine has been built up for quite some time, since 2010. Actions were deliberately taken to ensure that [Ukraine broke ties] with Russia ... but it is not so difficult to quarrel with Russia and stimulate its aggression against itself," Dubinskyi asserted. He said that while he does not defend Russia's actions against Ukraine, he is nevertheless sure that "the systemic policy of external management from elsewhere pushed us [to provoke Russia]." 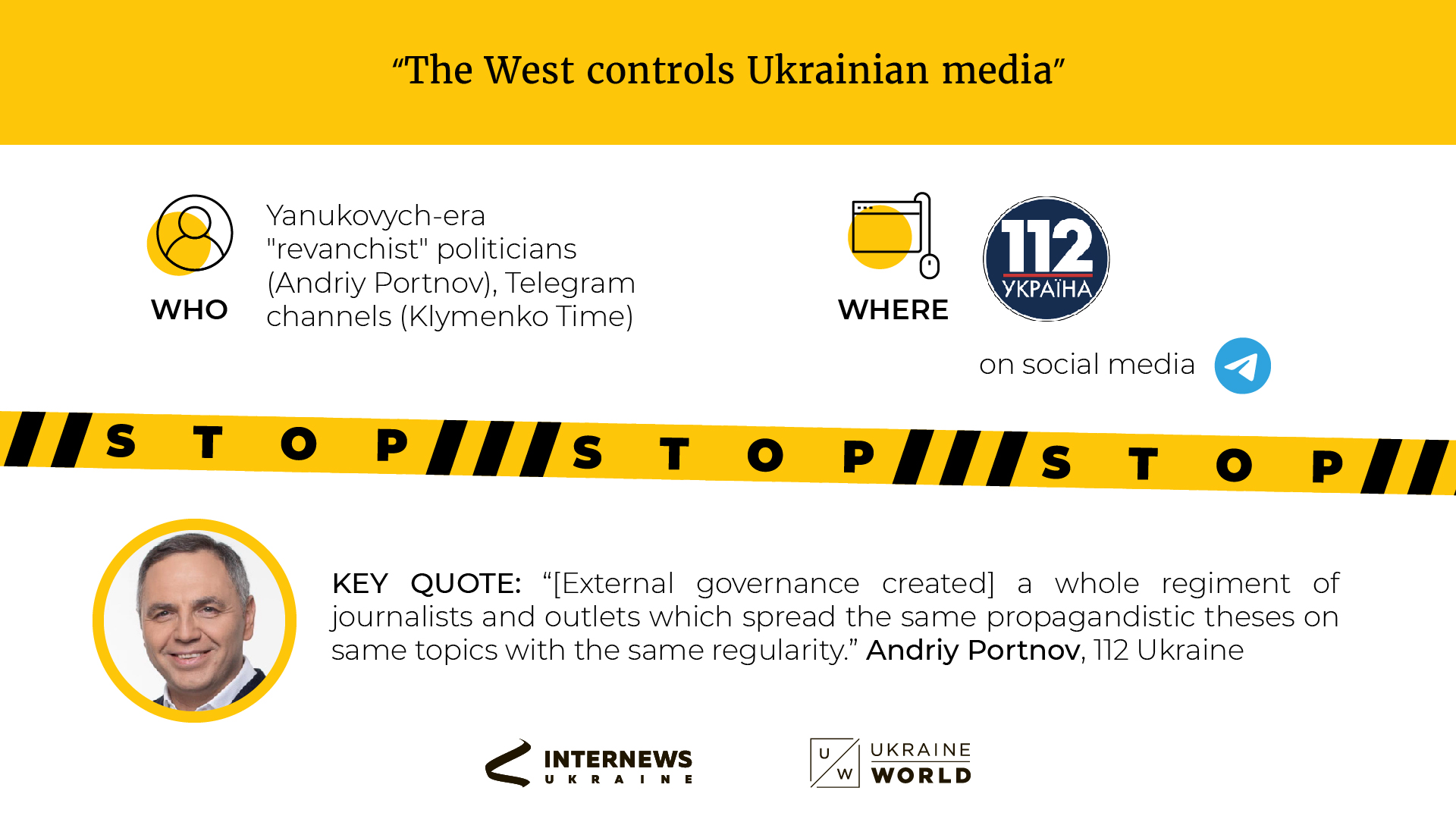 Last week there was a campaign against media outlets and organisations with pro-Western positions.

Andriy Portnov, a lawyer and former advisor to Ukrainian President Viktor Yanukovych (2010-2014), argued on 112 Ukraine that "external governance" created "a whole regiment of journalists and outlets which spread the same propagandistic theses on same topics with the same regularity."

Potnov had earlier accused Radio Svoboda (the Ukrainian branch of Radio Free Europe/Radio Liberty) of "propagating and promoting thieves and murderers." "You are a thievish Radio which raised a generation of thieves and fools," Portov wrote angrily on his Telegram channel.

The Klymenko Time Telegram channel wrote that some Ukrainian outlets---"Ukrayinska Pravda, liga.net, Dzerkalo Tyzhnia, lb.ua and others"--- did not report on the  alleged Biden-Poroshenko recordings because their American curators hadn't told them what to say yet. "Now they [the curators] will come up with something and send the unbiased, professional and independent journalists the playbook," reads Klymenko Time's post.

More than 80 Ukrainian diplomats, experts, and civic activists have signed the statement on the 12 Steps For A "Peaceful Settlement" For Ukraine
VIDEO
May 4, 2020