April 26, 2021
The NASH news network controlled by Murayev has taken the place of the banned TV channels of Medvedchuk. It mostly features the same guests and similar messages. 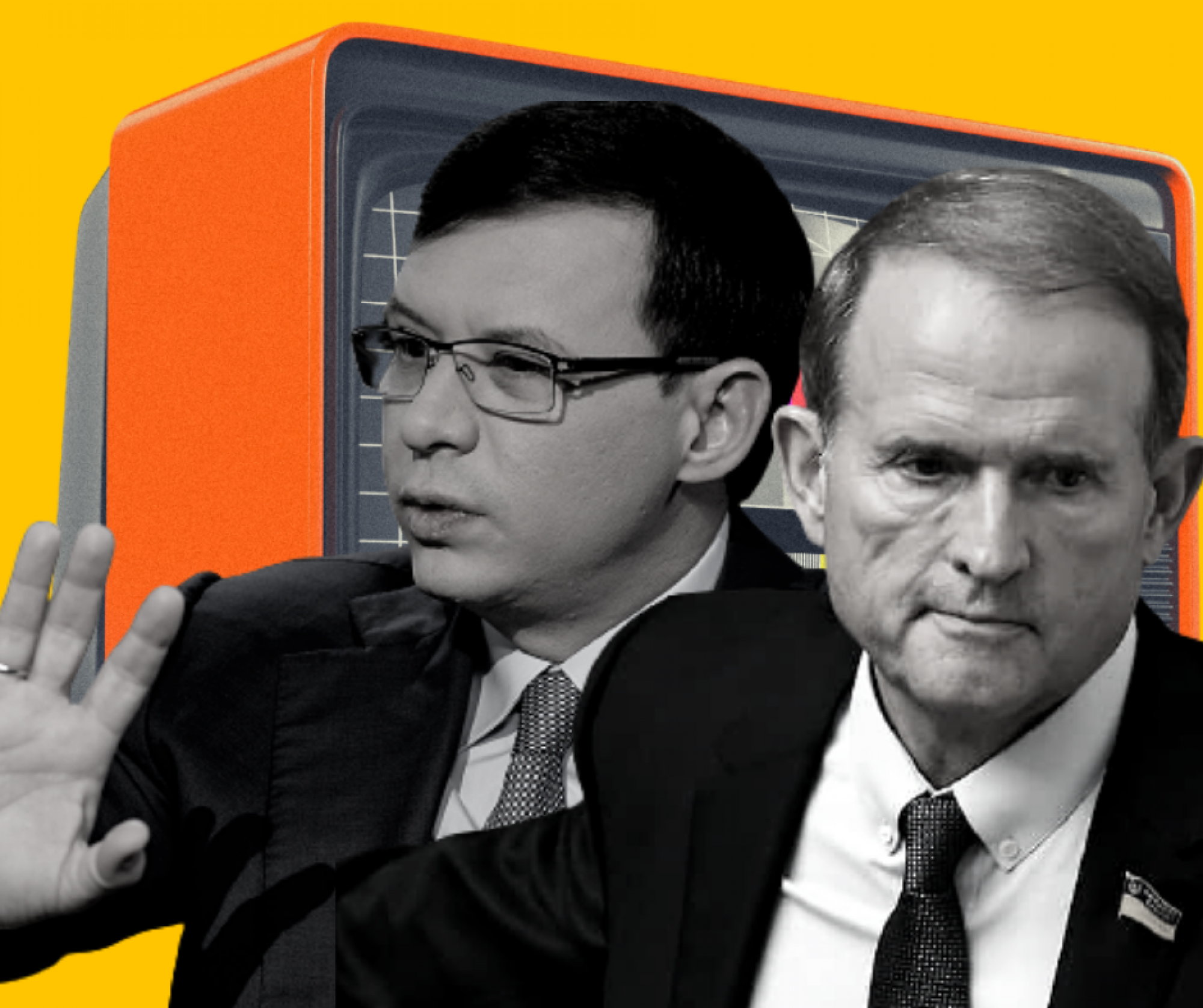 2021 has been a good year so far for the news channel NASH. In February, the TV networks 112 Ukraine, NewsOne and ZIK controlled by Viktor Medvedchuk, the key pro-Russian politician in Ukraine, were taken off the air by the National Security and Defence Council of Ukraine (NSDC). The First Independent TV channel, Medvedchuk's latest attempt to come back to Ukraine's TV scene, had its satellite signal blocked mere hours after its launch. Meanwhile, the popularity of NASH has grown threefold. NASH has become the second most popular news channel in Ukraine.

NASH is controlled by Yevhen Murayev, the leader of the Nashi (Ours) political party, which has a pro-Russian orientation. One of Murayev's slogans as the leader of Nashi is that "we [Ukrainians] have to protect what's ours" from foreign influences, mainly western ones. Some see the star motif in the party's logo as redolent of the Soviet (or Kremlin) red star.

Murayev is also the former owner of NewsOne and was a member of the For Life political party of Vadim Rabinovich, which later merged with Medvedchuk's party to become the Opposition Platform — For Life party. However, NewsOne was sold to Taras Kozak, a close ally of Medvedchuk, in October 2018. Prior to that sale, Murayev broke ties with the For Life party. He launched NASH in November 2018.

In the 2019 parliamentary elections, Murayev was number #1 on the list of Opposition Bloc, Ukraine's second-leading pro-Russian party, which is thought to be sponsored by Rinat Akhmetov, the richest person in Ukraine. One of the leaders of the Opposition Bloc is Vadym Novynskyi, an Akhmetov business partner. Mykhailo Dobkin, a former mayor of Kharkiv and former member of Viktor Yanukovych's Party of Regions who is a frequent guest on NASH, stated in an interview for Babel that "NASH is [controlled by] Novynskyi." However, both Murayev and Novynskyi have denied this.

Despite their shared political orientation, Murayev is no ally of Viktor Medvedchuk or his party Opposition Platform — For Life. In one of his appearances on NASH, Murayev disclosed that in 2018 he opposed the For Life party joining forces with Viktor Medvedchuk. That's when he was kicked from the party by Vadym Rabinovych, who has since been one of Medvedchuk's key allies. Murayev has argued that Medvedchuk has been treating him as a competitor ever since and has even lobbied for Russian sanctions against him. The rivalry between the two pro-Russian political figures can likely be explained by their competition for voters and political power within Ukraine's more Russia-friendly political constituencies. 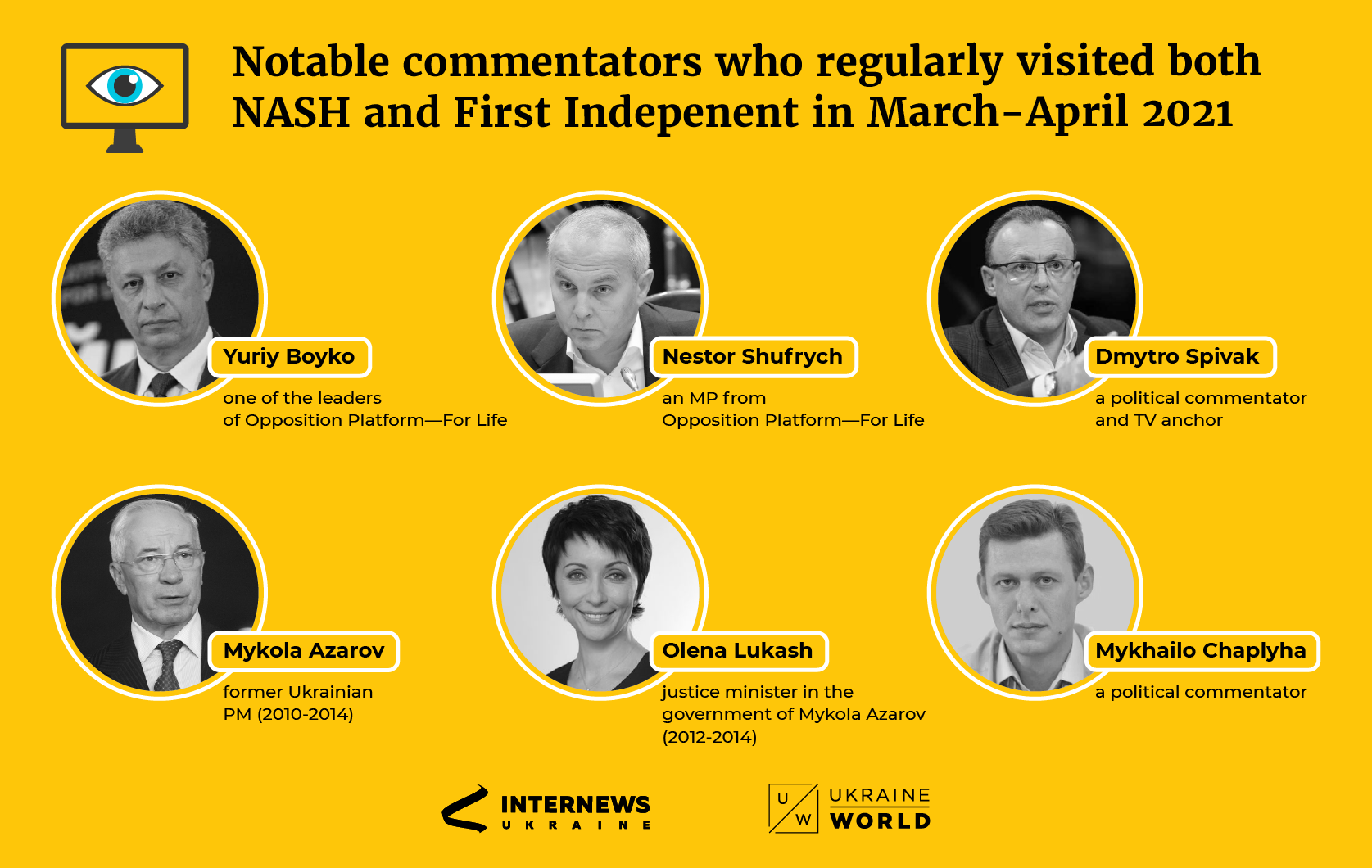 One of the speakers who frequently appear on both channels is Olena Lukash, a former member of the Party of Regions and the justice minister in the government of Mykola Azarov (2012-2014). Recently she has been using both platforms to promote the Russian coronavirus vaccine "Sputnik V." For instance, she said on NASH on March 30 that Ukraine has to use all available vaccines and argued that Ukraine won't use the Russian vaccine because the U.S. Embassy to Ukraine forbids it to do so. Shortly afterwards, on April 5, she appeared on Pershyi Nezalezhnyi saying that "we [Ukraine] have no vaccines" and all Western claims to support Ukraine turned out to be hoaxes. She also argued that "all the political games around vaccines cost human lives." (Note: as of April 20, Ukraine has received 117 thousand doses of the Pfizer/BioNTech vaccine free of charge via the COVAX programme. Ukraine's President Volodymyr Zelensky also recently announced an agreement to provide 10 million Pfizer/BioNTech vaccines. These doses will be added to the AstraZeneca/Oxford and CoronaVac/Sinovac vaccines which are already being administered in Ukraine).

Dmytro Spivak, a political commentator and TV anchor, also used both channels to lobby for the Russian vaccine. On March 23, Spivak predicted on NASH that "by mid-May, half of Europe will be buying "Sputnik V" because there should be no politics in the vaccination process, and also predicted that Ukraine would eventually be buying Russian vaccine from the EU. On March 29, he gave very similar remarks on Pershyi Nezalezhnyi, arguing that vaccine distribution around the world is being controlled by "transnational corporations." "We are having our strings pulled by the United States. They told us not to buy the Russian vaccine," Spivak lamented. (Note: as of April 20, the only EU member states buying "Sputnik V" were Hungary and Slovakia, while Austria and Germany have also declared interest in the Russian vaccine).

On March 19, the National Security and Defence Council of Ukraine (NSDC) introduced sanctions against 27 individuals, including former Ukrainian President Viktor Yanukovych and former PM Mykola Azarov. Both the First Independent and NASH then invited Azarov as a commentator. He claimed on First Independenton March 19 that the sanctions against him were retribution as a political opponent. Furthermore, he was interviewed by Vyacheslav Pihovshek, notorious for his work as a TV presenter loyal to the administration of former Ukrainian President Leonid Kuchma. Pihovshek apologized for Ukraine's sanctions. "I would like on behalf of Ukraine, which loves and respects you, to deeply apologize to you. Many generations grew up in Ukraine due to the fact that you provided us with the chance to quietly develop, establish families, give birth to children," Pihovshek said.

On March 24, the State Bureau of Investigations (SBI) announced that Azarov was suspected of high treason for ratification of the so-called "Kharkiv agreements", a treaty between Ukraine and Russia which extended the Russian lease on naval facilities in Crimea beyond 2017 until 2042. NASH invited him on the same day. While speaking on air, Azarov blamed Ukrainian authorities for economic decline and social problems, and asserted that Ukraine was under "external governance." "They have already sold the country. They build foreign [military] bases on our territory. How dare they blame us for anything? They are true traitors," Azarov fumed.

Mykhailo Chaplyha, a political commentator who frequently appears on the Medvedchuk channels, also disseminated narratives about "external governance" on both networks. On March 26, he asserted on First Independent that Ukrainian authorities serve not Ukrainians, but external actors. "We are dealing with external governance, for which the President of Ukraine is personally accountable. He sold all of us to slavery," Chaplyha argued. On March 29, as a guest on NASH, he repeated the message that the Ukrainian authorities were under foreign control: "When [new authorities] come into power, they come on the basis of populism, so-called easy solutions. However, when they start to serve, whom do they serve? To our so-called foreign partners. Colonisers, not foreign partners. Let's call a spade a spade". This example again demonstrates the similarity in the editorial orientation of NASH and First Independent.

Compared to First Independent, NASH invites adversarial guests — incumbent pro-Maidan MPs, patriotic activists and commentators — onto its shows much more often. In this way, the channel creates an image of balance and an unbiased selection of guests.

The channel deliberately invites guests with very different opinions and gives them questions to discuss which inevitably lead to confrontation. It is notable that on January 11, the channel invited Tetiana Chornovol, a former MP and activist from the Revolution of Dignity. During the show, the hosts compared the attack on the U.S. Capitol on January 6 with the Revolution of Dignity. Their sentiment was supported by Mykhailo Chaplyha, who was also a guest of the show. However, Chornovol denied this and compared protests in Washington with anti-Maidan, organised to support Viktor Yanukovych in 2013-2014. She said that falsification of the U.S. elections was impossible, and this phrase triggered an emotional quarrel. The hosts and Tetiana blamed each other for manipulation until she finally walked off. This part of the show was uploaded to the NASH YouTube channel titled "CHORNOVOL'S TANTRUM: she leaves the studio screaming."

Ihor Lapin, a former MP and war veteran, is also a frequent guest on NASH. He has usually been invited as a representative of the patriotic wing to make talk shows more provocative and confrontational. For example on December 21, he was involved in a discussion about the war in Donbas with Nestor Shufrych, an MP from the pro-Russian Opposition Platform — For Life party. In particular, Shufrych blamed Lapin for escalation in Donbas in summer 2014 and accused the post-Maidan government of "giving away Crimea". Such narratives aim at undermining public trust and belief in Ukraine's army and causing disillusion with the state of affairs in Ukraine. These examples show again that NASH uses appearances by patriotic public figures on its programmes to legitimize the pro-Kremlin narratives.

A very similar strategy is being used by Russian state-owned TV channels. They invite speakers from Ukraine as paid guests in order to use them as punching bags and represent to Russian audiences that Ukrainian experts are unhinged and can't keep up with the discussion. Their presence is also used to present the propaganda shows as legitimate journalism., Russian TV host Vladimir Solovyov in particular applies this strategy very often. His talk show, "Vecher s Vladimirom Solovyovym" (Evening with Vladimir Solovyov) often invites Ukrainian commentators for Solovyov to push around. As we can see from the examples above, the way NASH uses patriotic guests is fairly similar.

Although Murayev and Medvedchuk are not partners in the political sphere, Murayev's TV channel hosts numerous political commentators from Medvedchuk's political clan. These commentators very often voice the same messages both on NASH and Medvedchuk's Pershyi Nezalezhnyi. These messages are also rather similar to the rhetoric from the Kremlin and its media apparatus. For instance, the narratives about "Ukraine being a puppet of the West"and "Ukraine not being able to cope with the pandemic without the Russian vaccine" can often be heard on Kremlin-controlled media. NASH and Pershyi Nezalezhnyi also apply the same methods to spread these messages. They invite various guests with pro-Russian views so that messages which are important to the controllers of these channels are repeated multiple times. After these are broadcasted, they are also uploaded on YouTube and shared on social media. This similarity puts Murayev and Medvedchuk in alignment, even though their motivations may be different.