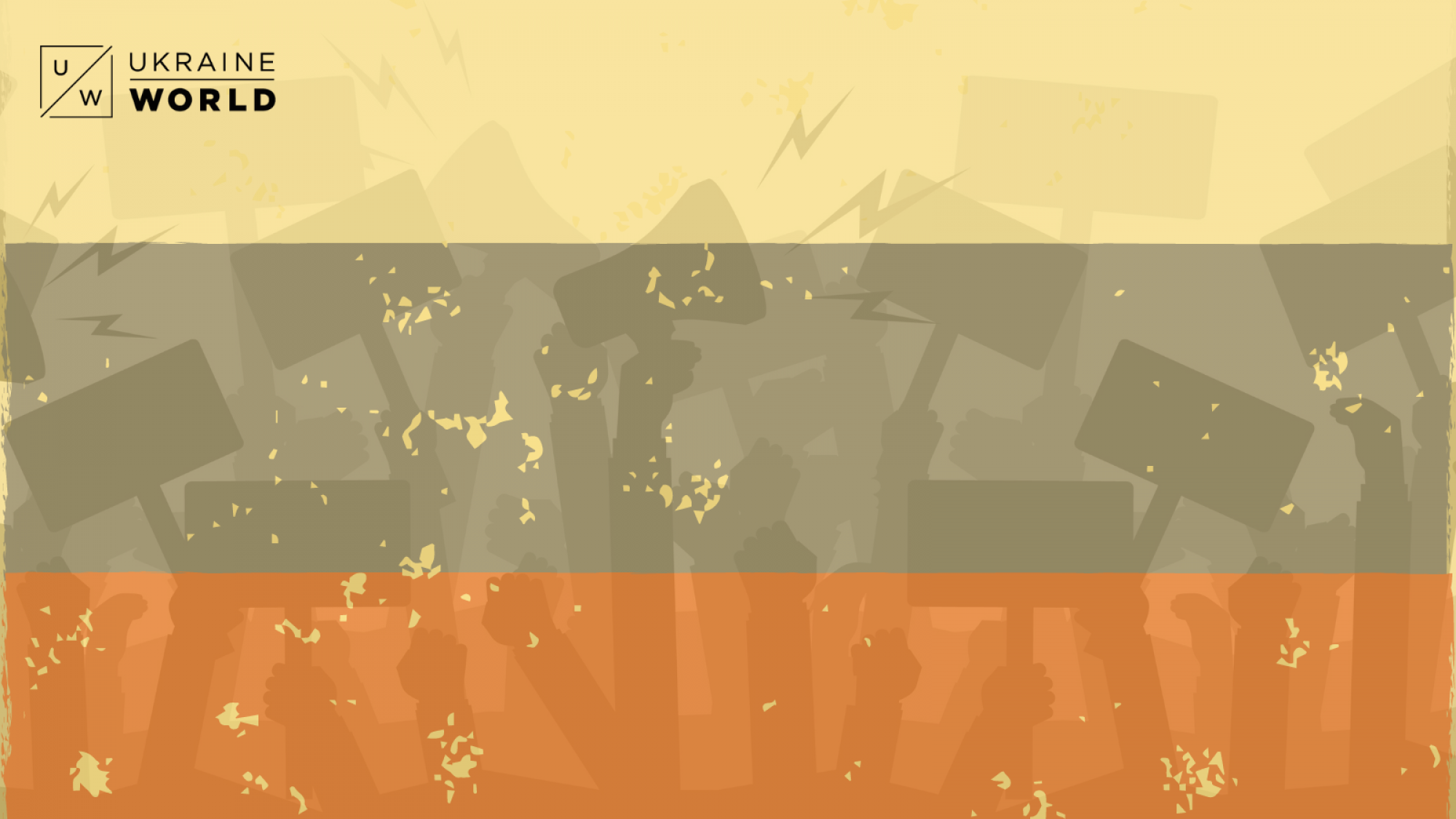 On August 24, Ukraine celebrated the 30th anniversary of its restoration of independence. On Independence Day, UkraineWorld argued that preserving and strengthening Ukraine's independence is important for Europe and the world as a whole because it halts further expansion of Russia's new imperialism.

In that imperialism, Russia repeatedly tries to undermine Ukraine's sovereignty and return the country to Moscow's political orbit. Pro-Russian political parties in Ukraine are one of the instruments which Moscow uses to this end.

UkraineWorld decided to study the rhetoric of several pro-RussianUkrainian parties on the topic of independent Ukraine's 30th anniversary. We reviewed their Facebook pages to determine which messages they during the month before the celebration (July 24-August 24). In this analysis, UkraineWorld focused on three parties:

Viktor Medvedchuk has strong ties to Russian President Vladimir Putin, who is the godfather of Medvedchuk's daughter. Furthermore, Medvedchuk's business interests are supported by Russia: according to Ukrainian media reports, he earns his money through Glusco gas stations (formerly affiliated with Rosneft, a Russian oil company).

Medvedchuk also has been the de-facto controller and beneficiary of the TV channels 112 Ukraine, NewsOne, and ZIK (Novyny media group). These channels were sanctioned by the National Security and Defense Council of Ukraine in February 2021.

Although the party claims to be pro-Ukrainian, Anatoliy Shariy has heavily criticized the Euromaidan of 2013-2014 and Ukraine's post-2014 authorities. His narratives often align with those of Russian propaganda. He also echoes Russia's domestic information agenda, primarily by mocking Russia's anti-Kremlin opposition.

UkraineWorld also planned to include the Opposition Bloc, Ukraine's second-leading pro-Russian party, which is thought to be sponsored by Rinat Akhmetov, the wealthiest person in Ukraine. However, its Facebook page has not been updated since October 27, 2020.

UkraineWorld examined Facebook pages of these parties using CrowdTangle, a Facebook-owned tool that tracks interactions on public content from Facebook pages and groups, verified profiles, Instagram accounts, and subreddits. It does not include paid ads, unless those ads began as organic, non-paid posts that were subsequently "boosted" using Facebook's advertising tools. It also does not include activity on private accounts or posts made visible only to specific groups of followers.

All three pages mostly feature statements from their leaders and members on various occasions, including the 30th anniversary of Ukraine's independence. UkraineWorld examined the messages in those posts for common narratives.

In its post on Independence Day, Opposition Platform — For Life writes that "today we all have a hard time" because "the country has fallen into bondage to foreign creditors... " Ukrainian land has been sold off, national resources and wealth are being sold. Domestic businesses and entrepreneurs are being ruined. The state is being corroded by corruption and lack of professionalism, and strategic enterprises are being ruined by foreign agents. And the worst thing is that the Constitution of the Ukrainian state has been trampled upon, and Ukraine has fallen into complete dependence on overseas curators". 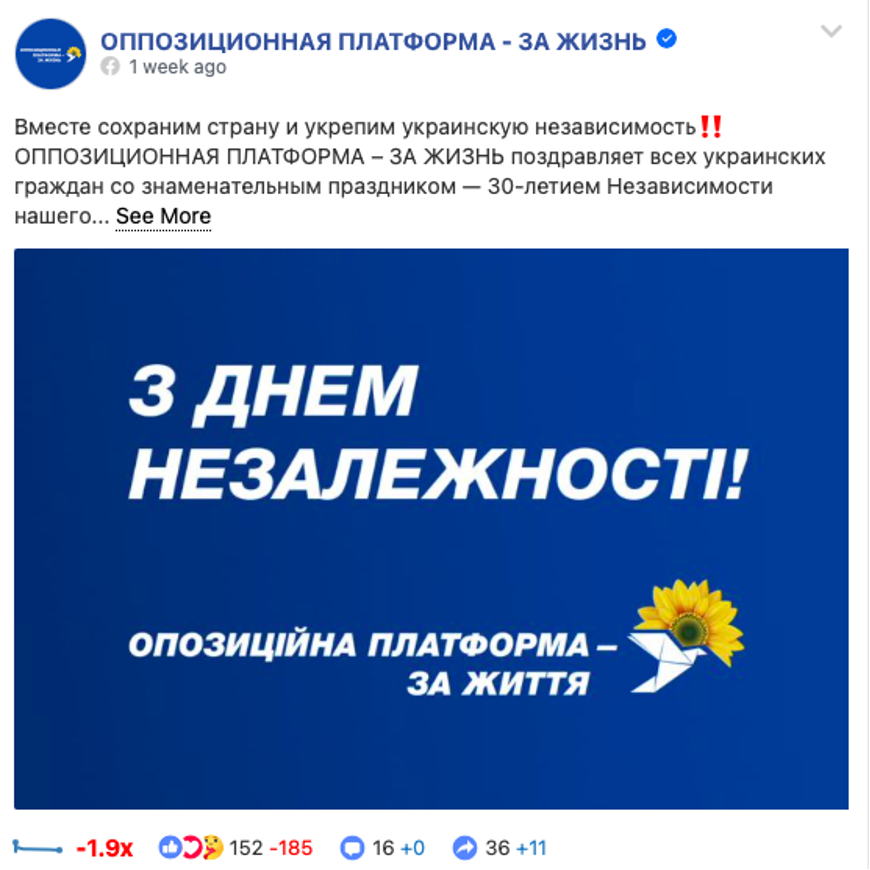 This party's Independence Day message was reinforced by a number of statements from the party's MPs and deputies in local councils throughout the month. For instance, Serhiy Kaltsev, the head of the Opposition Platform — For Life caucus on the Zaporizhzhya City Council, stated that "Ukraine is preparing to celebrate its independence with no peace and with poor people." "[The people of Ukraine] see no light and no prospects for betterment," Kaltsev adds. An almost identical statement was written by MP Yuriy Pavlenko on August 24. 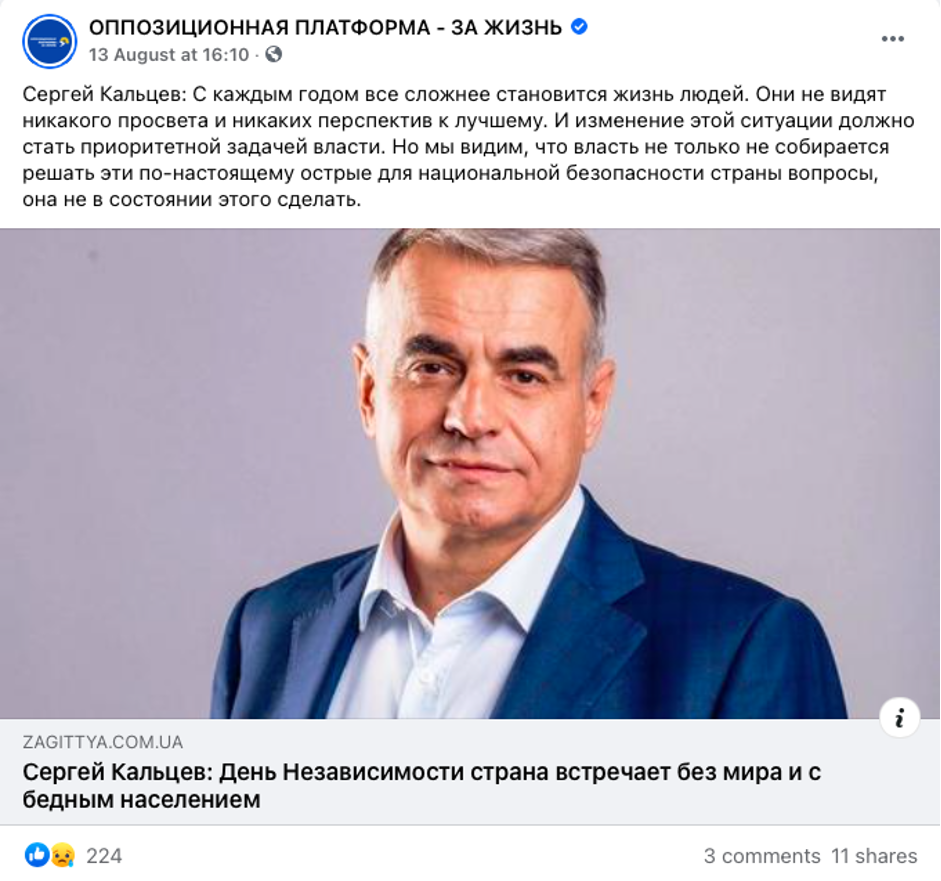 The party has always aimed to reduce the discussions on Ukraine's social and political agenda to mundane and populist topics such as utility tariffs. Its information campaign before August 24 was no different. One of the party's leaders, Yuriy Boyko, claimed that "decreasing utility tariffs would be the best gift to the people for Independence Day." 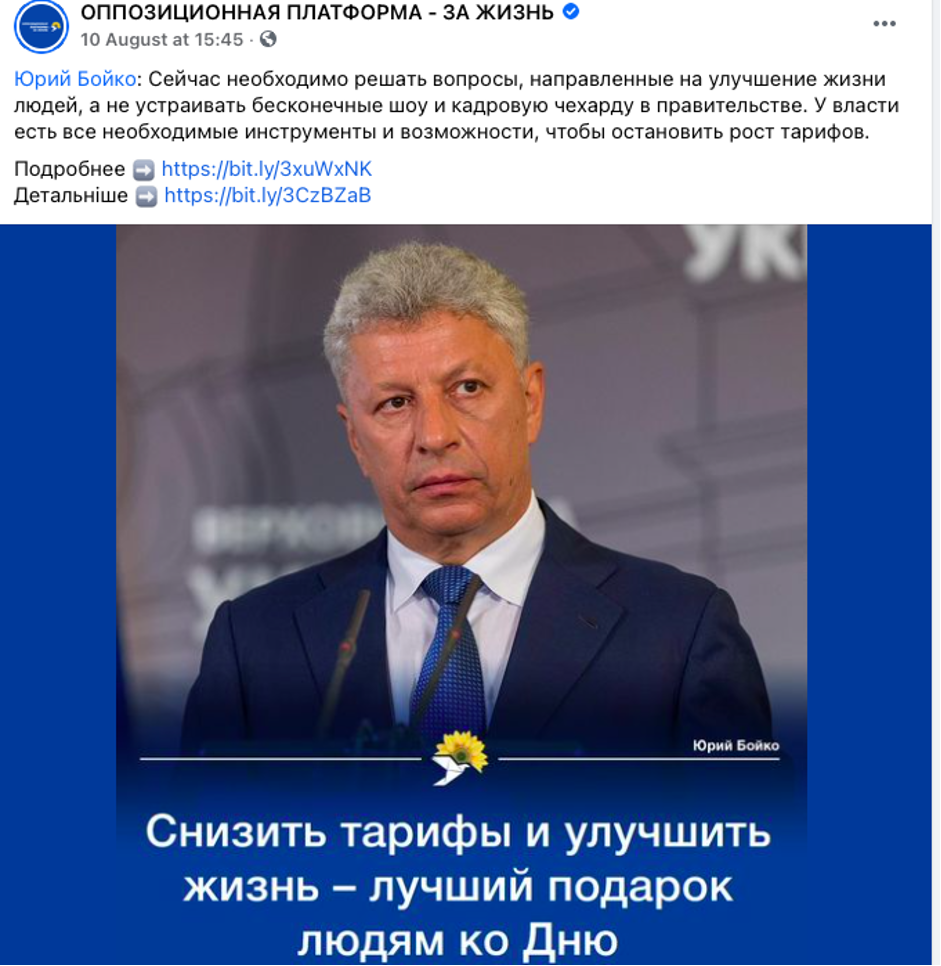 Opposition Platform — For Life also used news about the NSDC sanctions against Anatoliy Shariy and Olga Shariy, as well as against Ihor Guzhva, the editor-in-chief of Strana.ua website, to state that "Zelensky's regime has struck another blow against Ukrainian democracy on the eve of the 30th anniversary of independence...Reprisal against undesirable media is another step by Zelensky's regime towards an total and utter dictatorship," the picture added to the post reads. 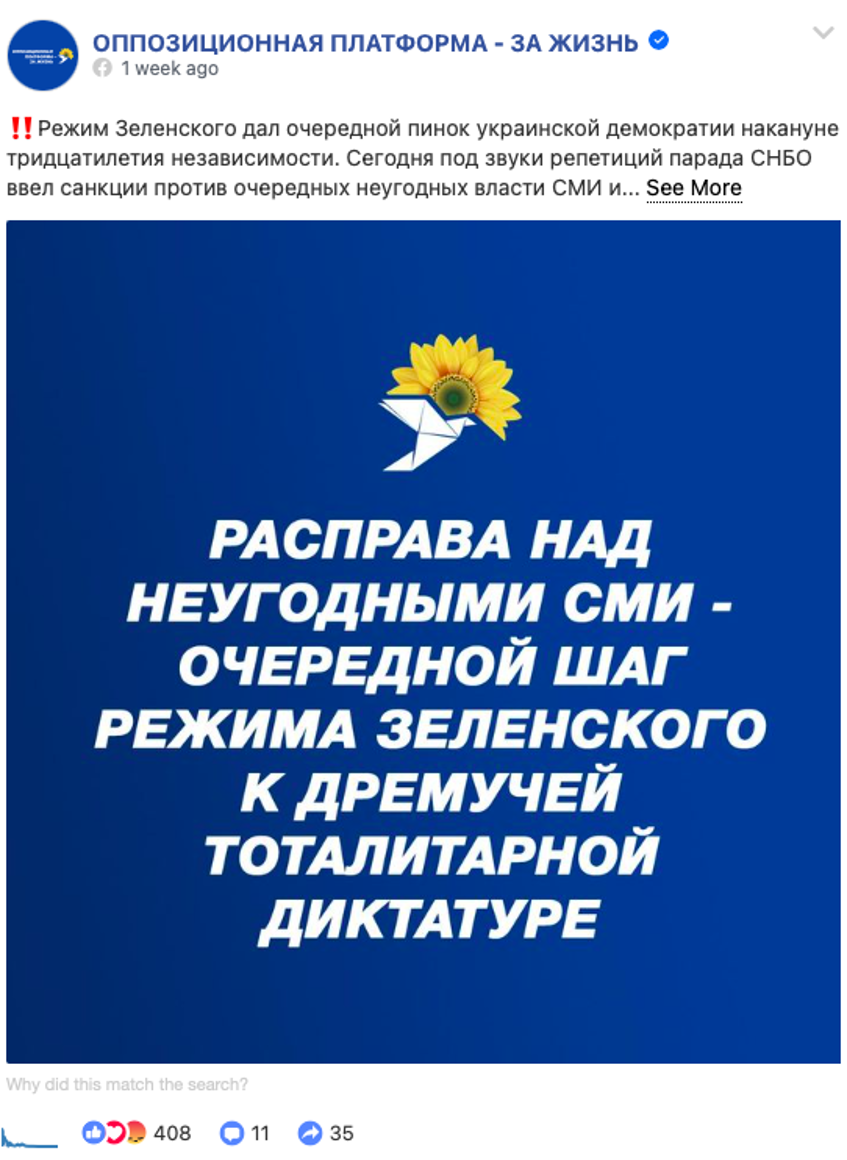 In its post for Independence Day, the Party of Shariy said it "appreciates everyone who protects peace in Ukraine and is not afraid to speak the truth" and "supports those who have the strength to stay out of politics, to remain human." According to the post, the party "does not divide the country based on language, religion or culture," insinuating that  Ukraine's government, on the other hand, is doing so. 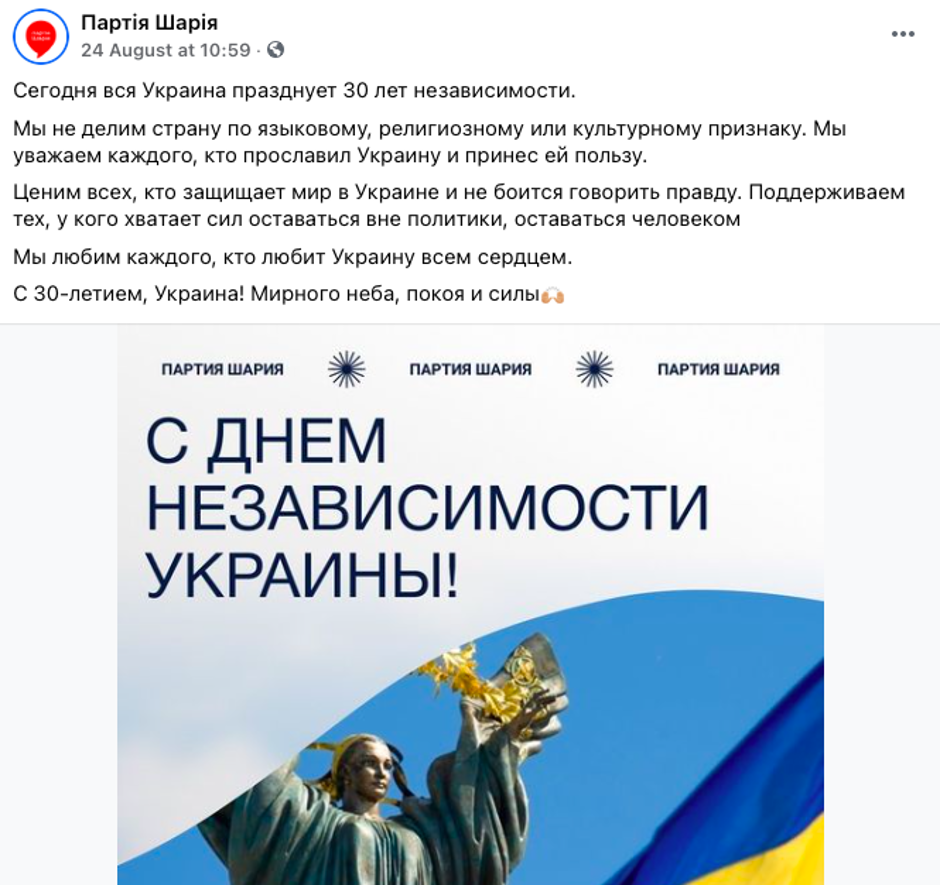 Similar to the Opposition Platform — For Life, the Party of Shariy tries to depict Ukraine as a poor and unsuccessful country. In a post from August 10 which criticizes the August 23rd Kyiv Summit of First Ladies and Gentlemen on "Soft Power in the New Reality". The post laments that "[o]n the occasion of the Independence Day of Ukraine, in a country exhausted by corruption, Zelensky decided to hold a pretentious and equally meaningless event called the Summit of First Ladies and Gentlemen". According to the statement, Ukraine's healthcare and education systems have been hindered by reforms. 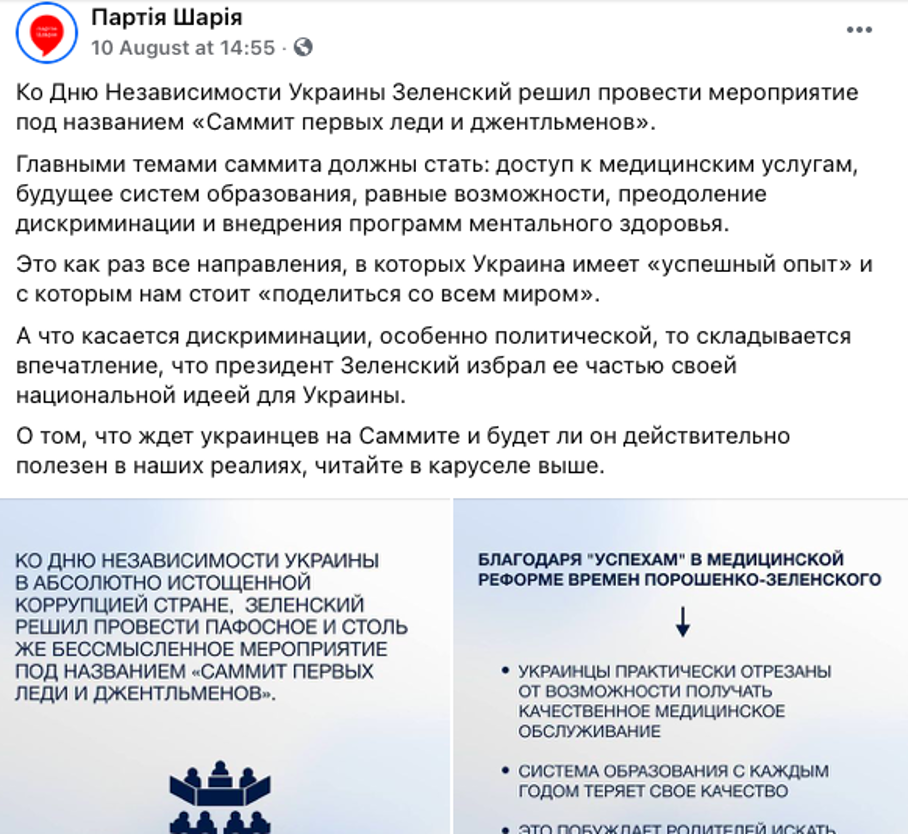 The Party of Shariy also spreads the narrative about "external governance" found among other anti-Maidan parties, which is aimed at casting doubt upon Ukraine's independence. In a post on August 9, the party quotes its leader Anatoliy Shariy saying that he is sure that Arsen Avakov, Ukraine's former interior minister, stepped down because of American pressure. "They tell you to go, and you go. That's how the "partnership" between Ukraine and the [United] States works," the post reads. 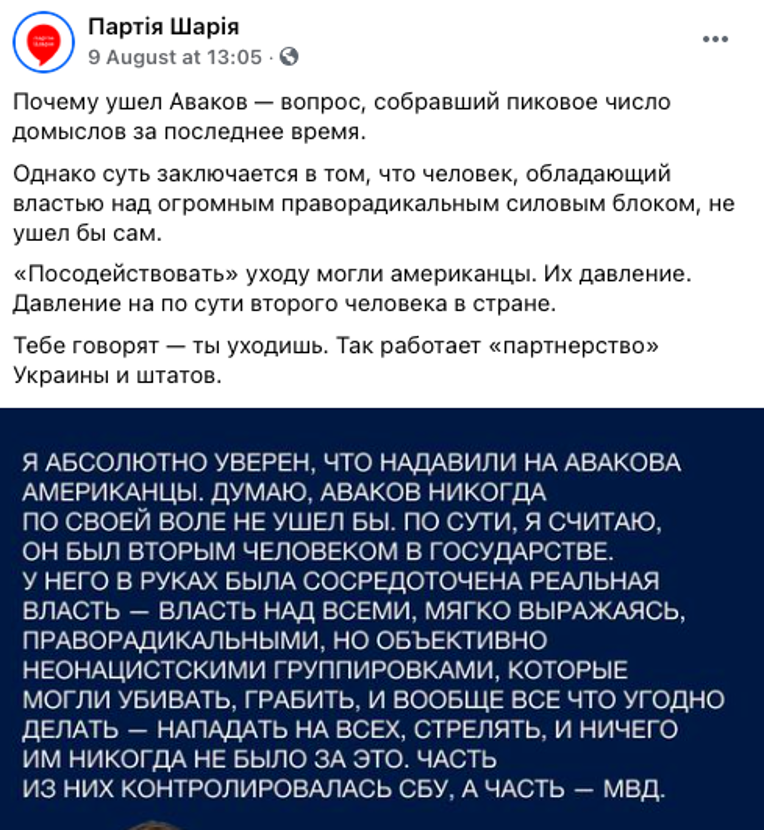 Unlike the other two party pages we analyzed, which mainly create original content for Facebook, the Nashi page almost exclusively posts clips from Yevhen Murayev's speeches on his own news channel NASH. Even for Independence Day, there was no special greetings for the holiday, but rather only an announcement for special programming on NASH with Murayev's participation. During this programme, Murayev stated that "there will be no peace or future in Ukraine while they [the government] are trying to establish a single ideology across the country." According to Murayev, the Ukrainian government "lost Crimea and started a massacre in Donbas" because of this ideology. 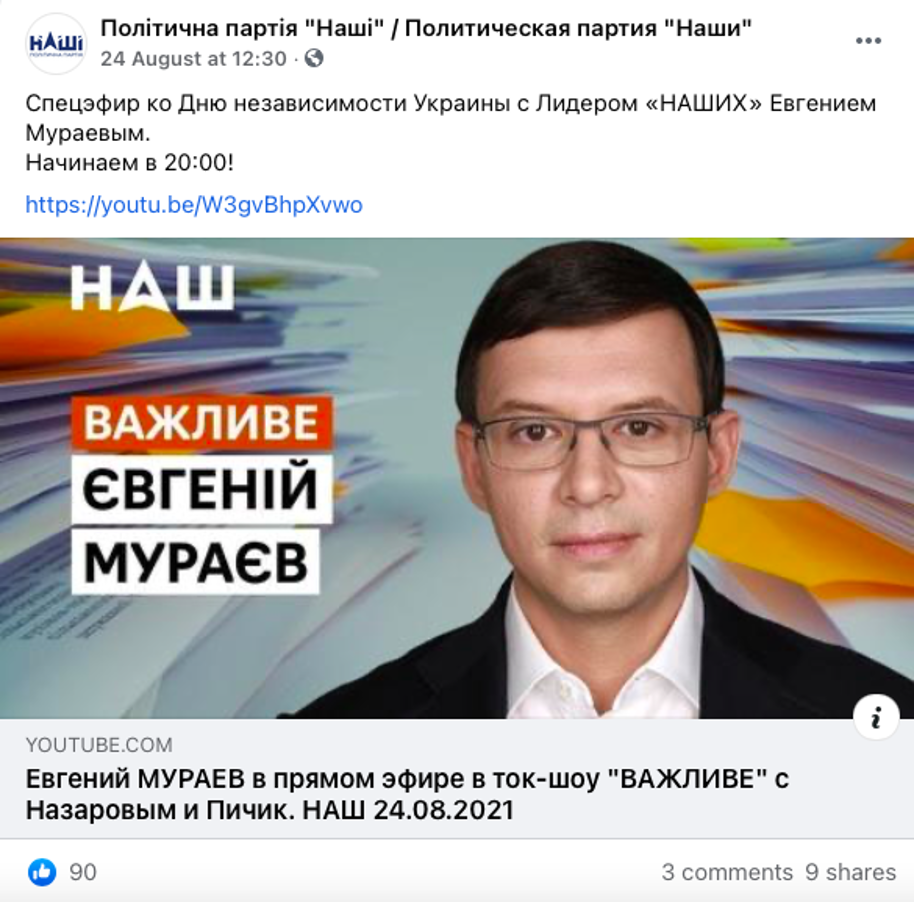 In another post, the page featured Murayev's speech on the Ukraine24 news channel (owned by Rinat Akhmetov) on August 19. Murayev argued that during its 30 years of its independence, Ukraine has only been on a downward path. The reason, according to Murayev, is that Ukraine has been trying to decide in which direction it should go — towards Russia or towards Europe. Hence, the non-aligned, neutral state with a pragmatic approach to cooperation with all its neighbours is the obvious choice, Murayev said. 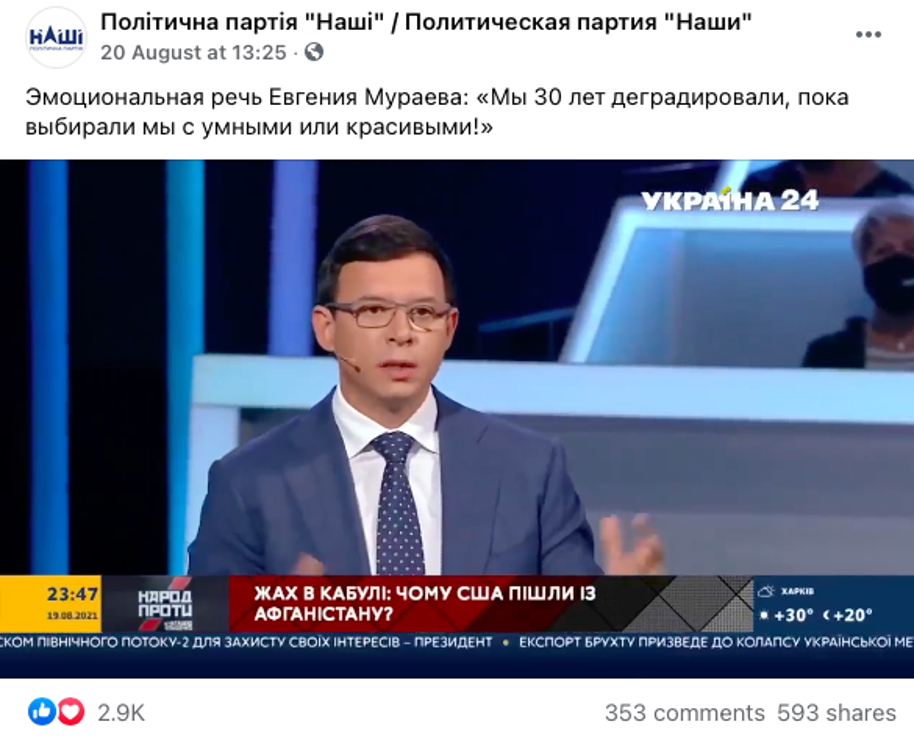 Another Murayev appearance on the Ukraine24 talk show Narod Proty (The People are Against) was posted on August 20. In this clip, Murayev argues that the United States invented corruption and now uses it as an instrument to establish external governance in Ukraine. "They [the U.S.] give money here and then create anti-corruption bodies. They take note of all the public officials who steal, hook them and then completely use them. That is also what's happened in Afghanistan," Murayev asserted. He also argued that the U.S. abandoned Afghanistan and would inevitably abandon Ukraine as well. 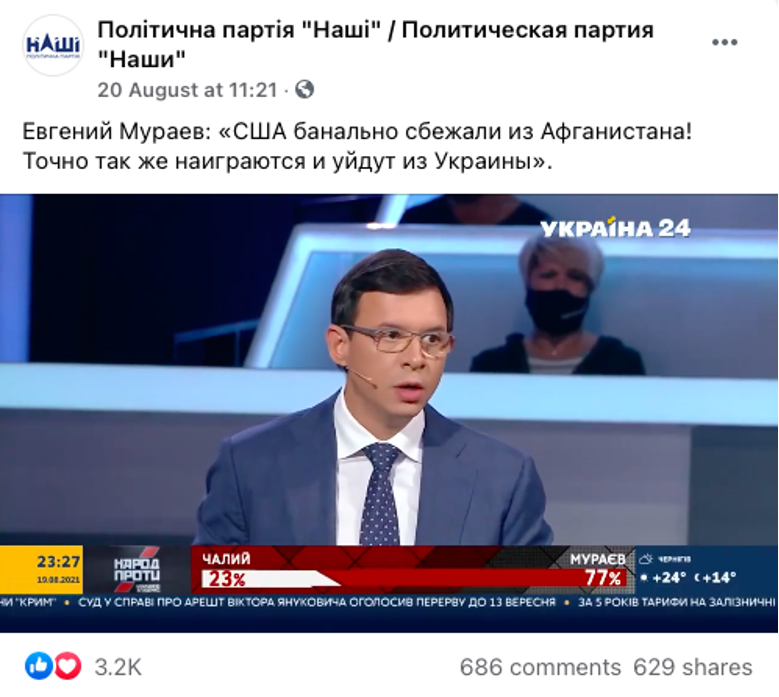 The specifics of their messaging are often different. The narratives they put forth, however, are the same. They claim that Ukraine is under "external governance" of the West. They say that Ukraine is a poor and unsuccessful country with no democracy, no freedom of speech, and no prospects for the future. All three parties criticize Ukraine's cooperation with the West. By saying that the West is the key threat to Ukraine's independence, they aim to sow the seeds for an eventual takeover of Ukraine by Russian expansionism. By playing on Ukrainians' desire to regain their international agency, they actually try to tear Ukraine from its place as a part of European civilization and bring it back to the Russian empire.

The narratives of Opposition Platform — For Life, Party of Shariy, and Nashi also resemble those distributed by the Kremlin and the outlets it controls. However, Ukrainians trust information from Russian media less and less each year. The situation is very different with Ukrainian pro-Russian actors, who do manage substantial trust and support among the Ukrainian population. These actors do not always act as echo chambers for Russian narratives (though they often do). Still, they contribute to the spread of despair, conspiratorial thinking, and a lack of agency among Ukrainian citizens. That is precisely what the Kremlin needs in order to subordinate Ukraine.

What is it like to live under a constant threat of Russian invasion? What are the possible scenarios in the coming weeks? Listen to our new podcast.
VIDEO
May 30, 2022