June 10, 2020
Internews Ukraine and UkraineWorld.org publish a regular roundup of anti-Western messages in Ukraine aimed at undermining trust in democracy and in Ukraine’s integration with the EU and NATO. We publish regular weekly and monthly reports, and also provide alerts covering specific narratives when they appear. 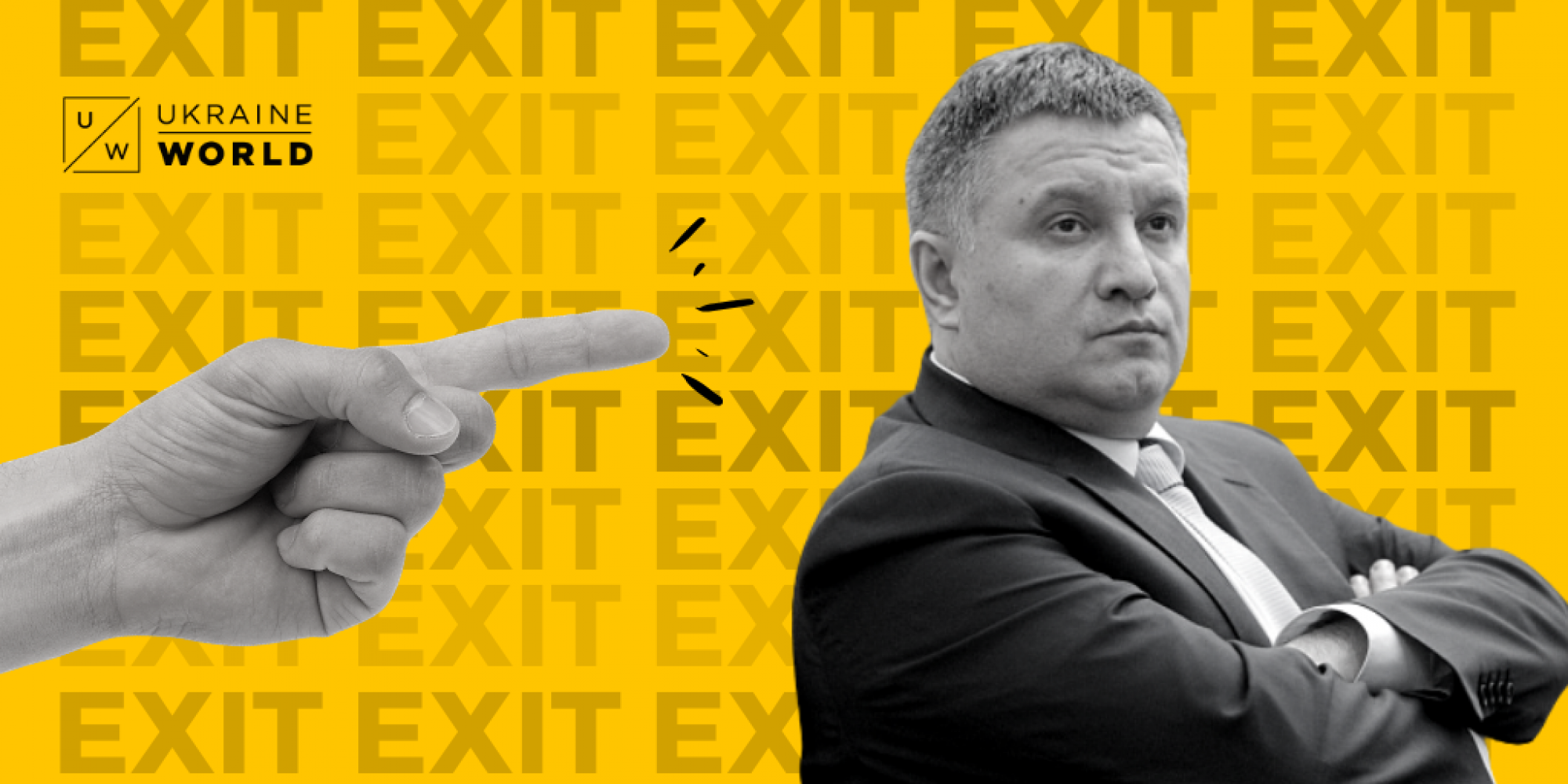 Over the period of 1-8 June, the following anti-Western narratives were the most prominent in Ukraine's information sphere:

"The U.S. got hit by a karmic boomerang" 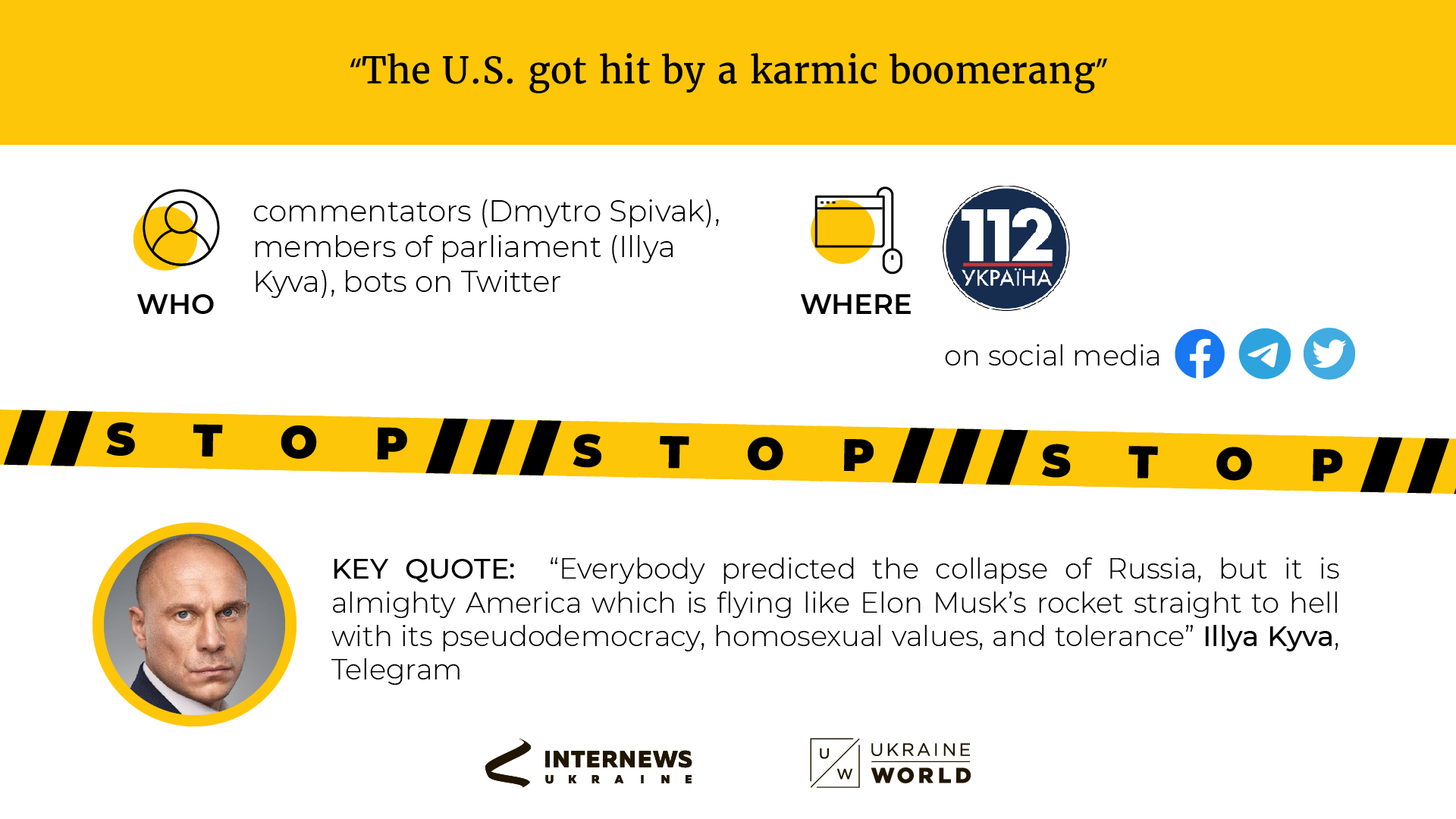 As protests in the U.S. escalate, anti-Western actors in Ukraine are making spiteful comments and drawing lines between events in the U.S., Euromaidan, and other revolutions all over the world.

Dmytro Spivak, a politician and commentator, argued on 112 Ukraine that "a boomerang hit the United States of America back." According to Spivak, protests in the U.S. were caused by racism and social injustice, but some politicians have been using popular anger for their own gain. Spivak underlined that these politicians "know how to organise all these [protests] as refined in Iraq, Iran, Yugoslavia, Georgia and Ukraine," Spivak emphasized.

Illya Kyva, an MP from the pro-Russian Opposition Platform-For Life party, argued in a video on his Telegram channel that while "everybody predicted the collapse of Russia, but it is almighty America which is flying like Elon Musk's rocket straight to hell with its pseudodemocracy, homosexual values, and tolerance. "

Pro-Russian bots on Facebook and Twitter have also been delighting in this topic. "It's strange, but during the coronavirus pandemic and riots in America, Assad has stopped using chemical weapons against his citizens, Maduro isn't destroying democracy in Venezuela, and righteous protesters are not being oppressed in Hong Kong. Even Russia is invading Ukraine less and less," claims a popular tweet retweeted by pro-Russian bot network.

Conspiracy theorists also have an opinion on this matter. One of the posts on Facebook which has been widely shared in anti-vaccination groups claims that protests in the U.S. were organised by people close to Bill Gates because his hoax with coronavirus pandemic did not work.

"Sorosiata are acting against Arsen Avakov" 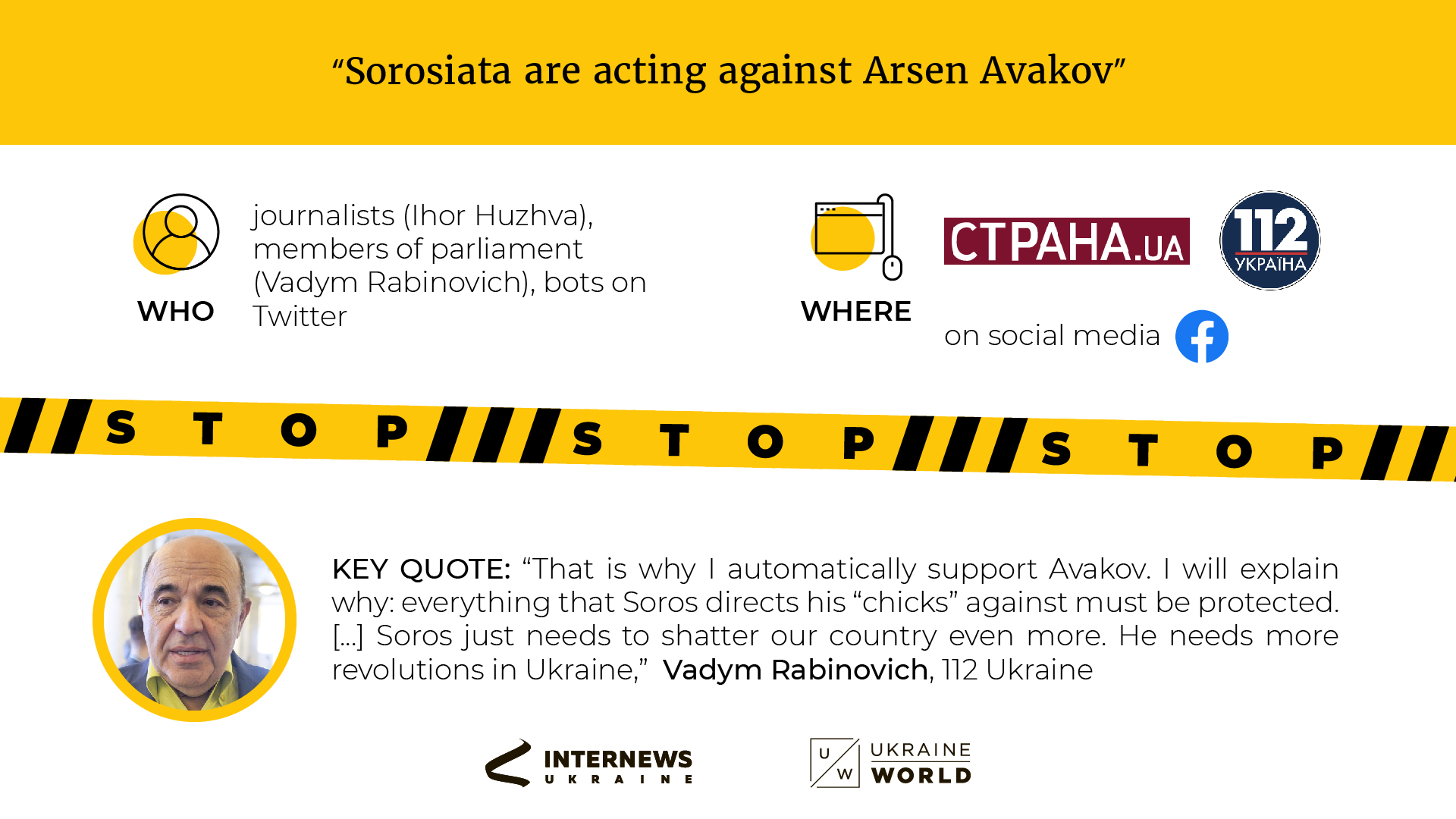 Over the last few years, there have been numerous police-related scandals that have laid bare the ineffectiveness of police reform in Ukraine, which has been overseen by  Ukraine's controversial interior minister Arsen Avakov. Last week, he reported to the Verkhovna Rada amidst calls from the Holos party for his dismissal. Anti-Western actors have claimed that this shows that "sorosiata" want to take down Arsen Avakov.

Ihor Huzhva, editor-in-chief of strana.ua, wrote on Facebook that the West is trying to get rid of Avakov via "sorosiata," who claim that Avakov "is halting the reforms." According to the post, Andriy Yermak, the head of President's office, and other members of Zelensky's team also want to fire the "uncontrollable Avakov" and replace him with a "yes-man."

Vadym Rabinovich, one of the leaders of Opposition Platform---For Life, argued on 112 Ukraine that the protests against Avakov were organised by "sorosiata" and the far-right Svoboda party. "That is why I automatically support Avakov. I will explain why: everything that Soros directs his "chicks" against must be protected. [...] Soros just needs to shatter our country even more. He needs more revolutions in Ukraine," Rabinovich said.

"The IMF is destroying Ukrainian sovereignty" 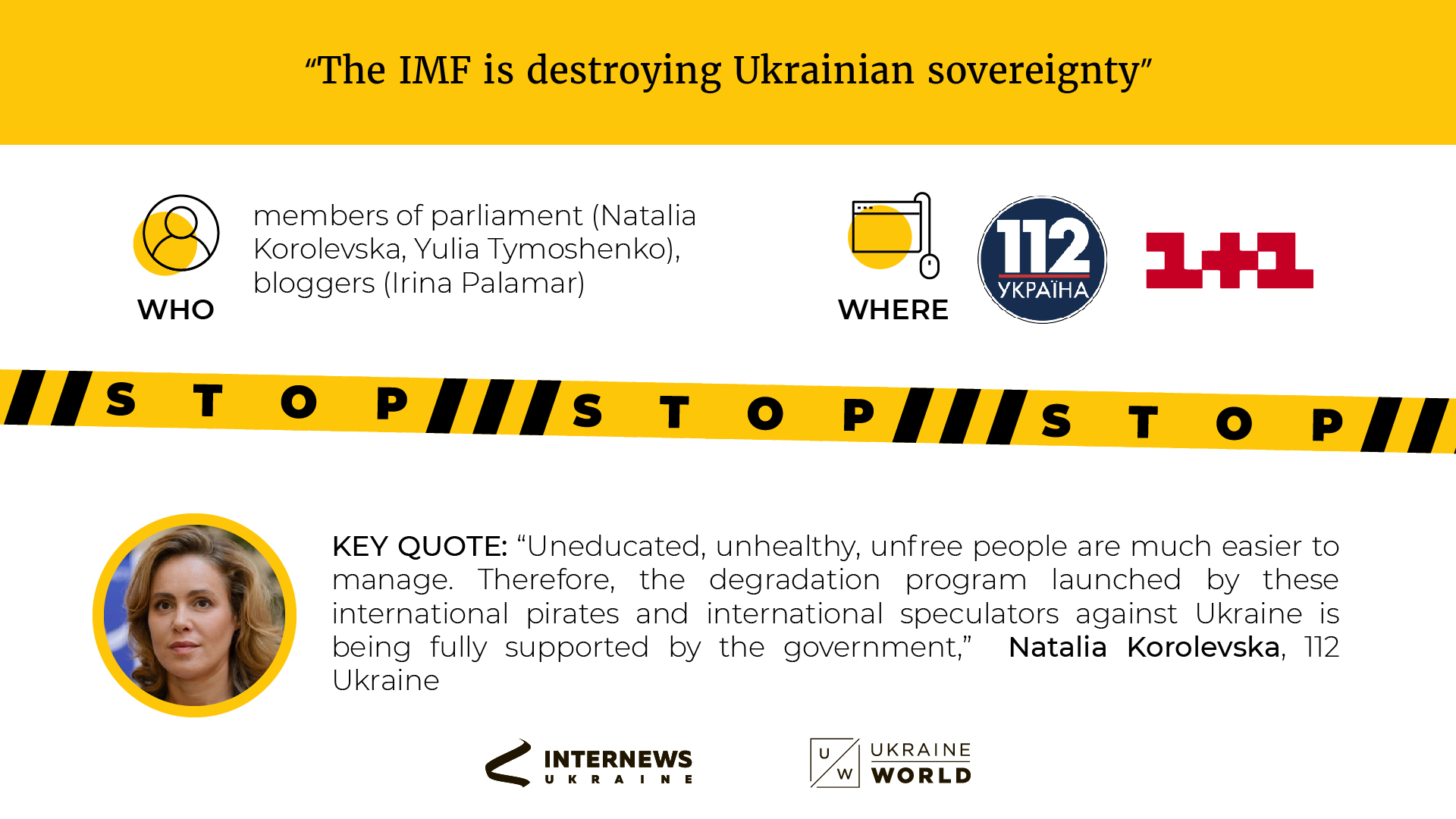 The narrative against the memorandum between Ukraine and the IMF which we laid out in a previous issue of this digest continued with anti-Western actors saying that the IMF is destroying Ukrainian sovereignty.

Natalia Korolevska, an MP from the Opposition Platform---For Life party, declared during a talk show on 112 Ukraine that the IMF wants to raise a generation of stupid Ukrainians. "And now [Ukraine has received] a new requirement: let's close schools. Why do we need children who can read, write, think? Uneducated, unhealthy, unfree people are much easier to manage. Therefore, the degradation program launched by these international pirates and international speculators against Ukraine is being fully supported by the government," Korolevska proclaimed.

Irina Palamar, a blogger and head of the Ukrainian Stock Breeders Association, argued on the same talk show that the West "is recruiting and brainwashing talented students from the National University of Kyiv Mohyla Academy" and is turning them into "robots who will destroy their country."

Yulia Tymoshenko, the leader of the Batkivshchyna party, said during a talk show on 1+1 that her party will challenge the memorandum between Ukraine and the IMF in the Constitutional Court. "Our financial flows, mineral resources, and strategic state-owned enterprises are being given away by the government to international speculators. This means that the profits brought by domestic financial flows, our state property, will no longer belong to Ukrainians," Tymoshenko warned. 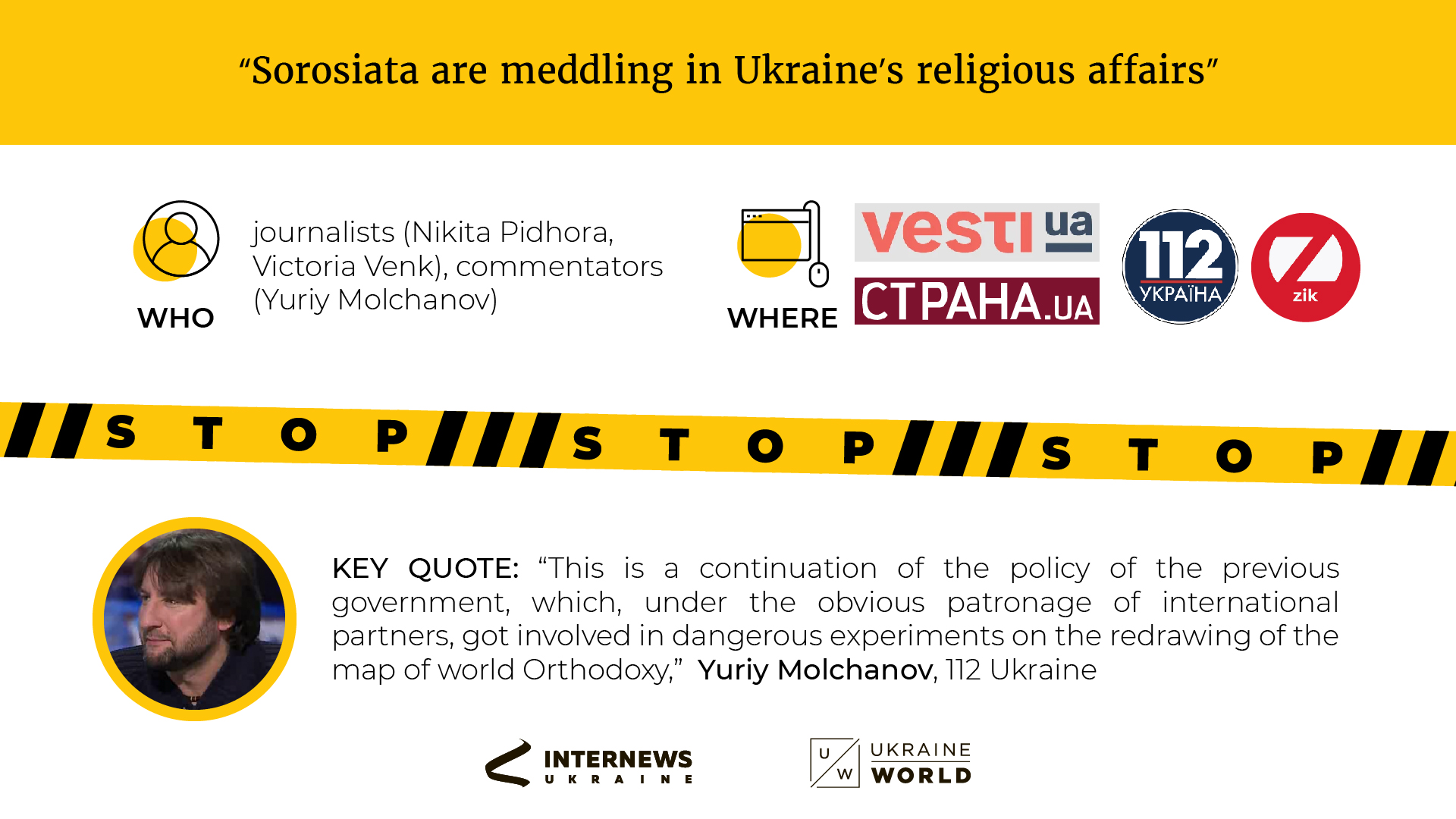 Om June 3, the Foreign Policy Research Institute, a Ukrainian think-tank, announced on its website it had received a grant from the EU to study public opinion in Ukraine on the affiliation of Ukrainian and Ruthenian Greek Catholic Churches with the Orthodox Church of Ukraine (the one created as a result of the granting of autocephaly). Later the organisation stated this information was published by hackers.

Vesti.ua writes that this means that "Ukraine will become a testing ground for new methods of managing religious conflicts." According to the article, the West also "wants to find peaceful ways for the Orthodox Church of Ukraine to steal parishes and property from other churches."

Strana.ua calls this project "Tomos-2" (in reference to the granting of the UOC's autocephaly, known as Tomos) and says this might be a prelude to "stealing Ukrainian Greek Catholics from the Pope."

Yuriy Molchanov, a political commentator, warned in commentary for 112 Ukraine that "this is a continuation of the policy of the previous government, which, under the obvious patronage of international partners, got involved in dangerous experiments on the redrawing of the map of world Orthodoxy."

What Is the State of Western Support of Ukraine?