June 16, 2020
Internews Ukraine and UkraineWorld.org are continuing to publish a regular roundup of anti-Western messages in Ukraine aimed at undermining trust in democracy and in Ukraine’s integration with the EU and NATO. We publish regular weekly and monthly reports, and also provide alerts covering specific narratives when they appear. 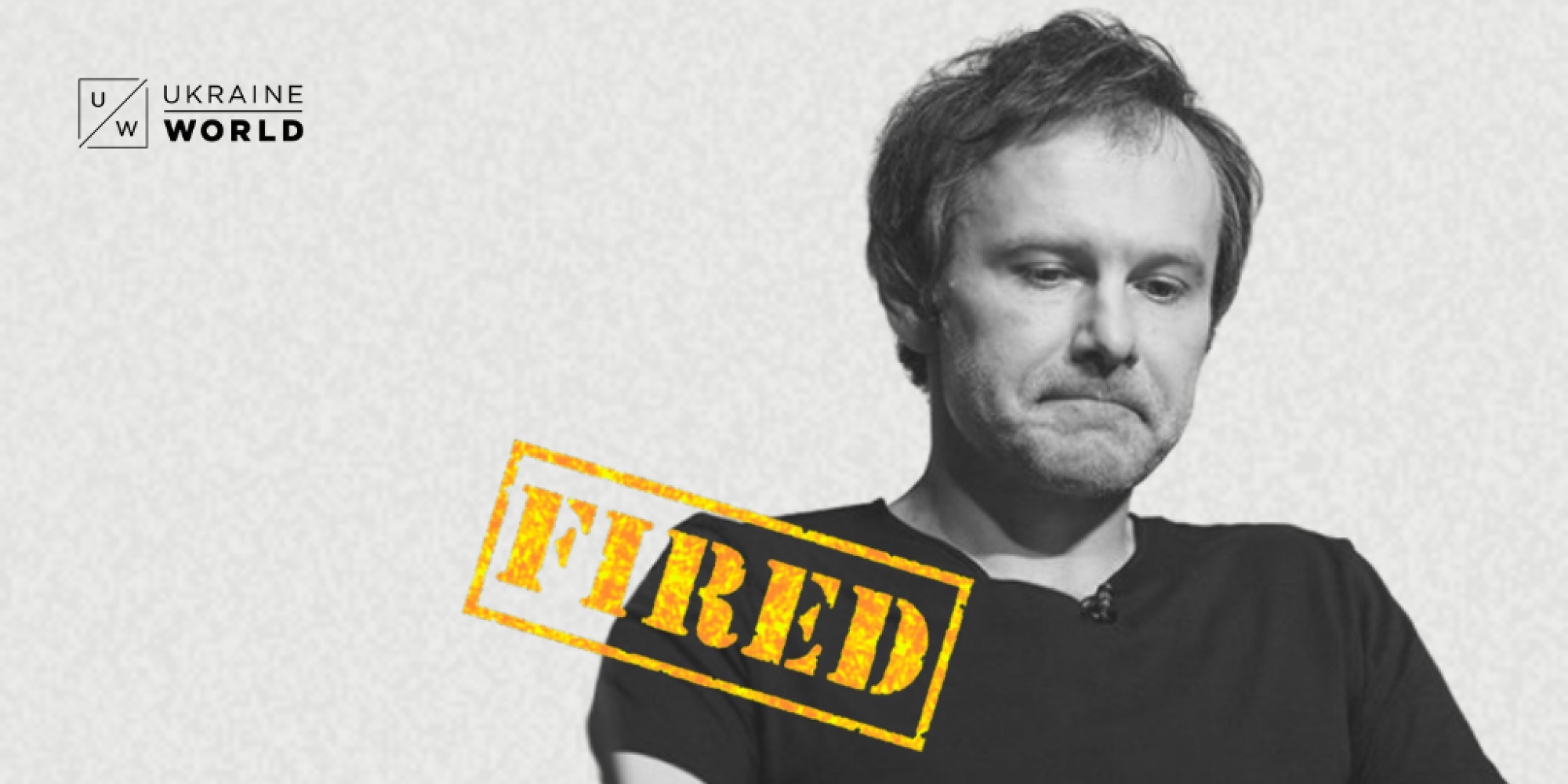 Over the period of 8-15 June, the following anti-Western narratives were the most prominent in Ukraine's information sphere:

"The IMF loan will not help Ukraine" 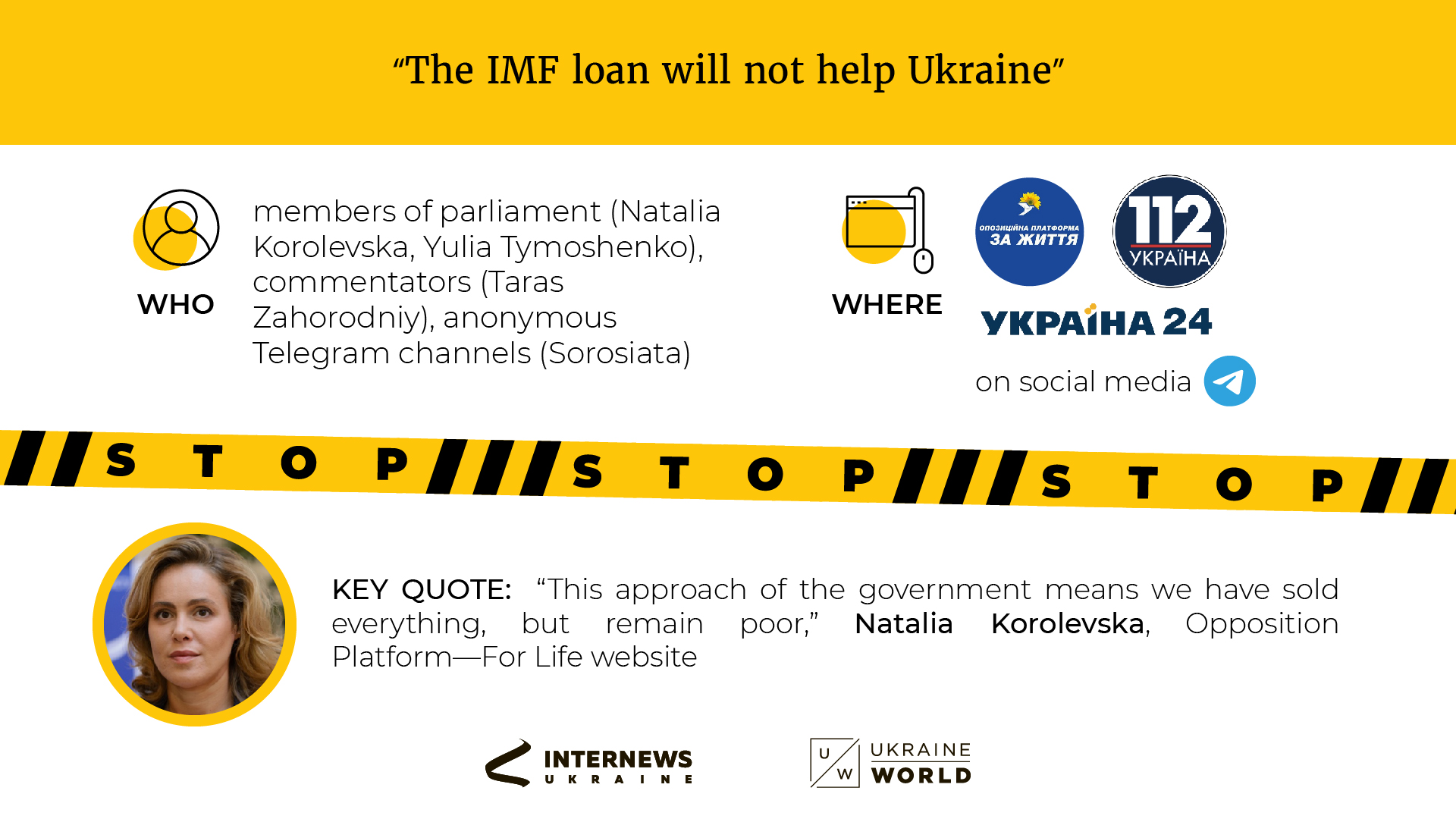 Last week, Ukraine received a $2.1 billion first loan tranche from the International Monetary Fund. Anti-Western actors who have long been sharing anti-IMF messages reacted by saying that this loan will not save Ukraine from economic crisis.

Natalia Korolevska, an MP from the pro-Russian Opposition Platform---For Life party, argued that in exchange for  $5 billion through the stand-by programme with the IMF,  "the Zelensky team agreed to arrange the sale of Ukrainian land and freeze pensions." Also, according to Korolevska, the Ukrainian government transferred control over the energy, banking, judicial, customs and tax sectors to "external governance." "This approach of the government means we have sold everything, but remain poor," Korolevska declared.

The anonymous Telegram channel Sorosiata wrote that there is "an undeniable fact" of  "hybrid occupation of Ukraine by a private foundation [the IMF]."  "When you are provided with a loan and at the same time receive a list of demands, this is not assistance. This is most likely servitude," a post on the channel reads.

Yulia Tymoshenko, the leader of the Batkivshchyna party, said on Ukrayina24 that the loan received from the IMF is "another dose of a financial narcotic...Even without this loan, every third hryvnia in Ukraine's state budget is used to repay debts, not to pay salaries and pensions. That's why the president and prime minister didn't need to talk to the IMF about it. We had the opportunity to take about three billion dollars at a rate twice as low and without any conditions," Tymoshenko argued.

Taras Zahorodniy, a political commentator, argued in a segment for 112 Ukraine that Ukraine should focus on its own economy. "Conditions set by the IMF are in fact slavery for Ukraine. De facto foreign countries pump out much more resources from our country due to public procurement, by reducing import duties, by entering our market. Therefore, our losses [due to cooperation with the West] are much greater [than the benefit of the IMF loan]," Zahorodniy explained. 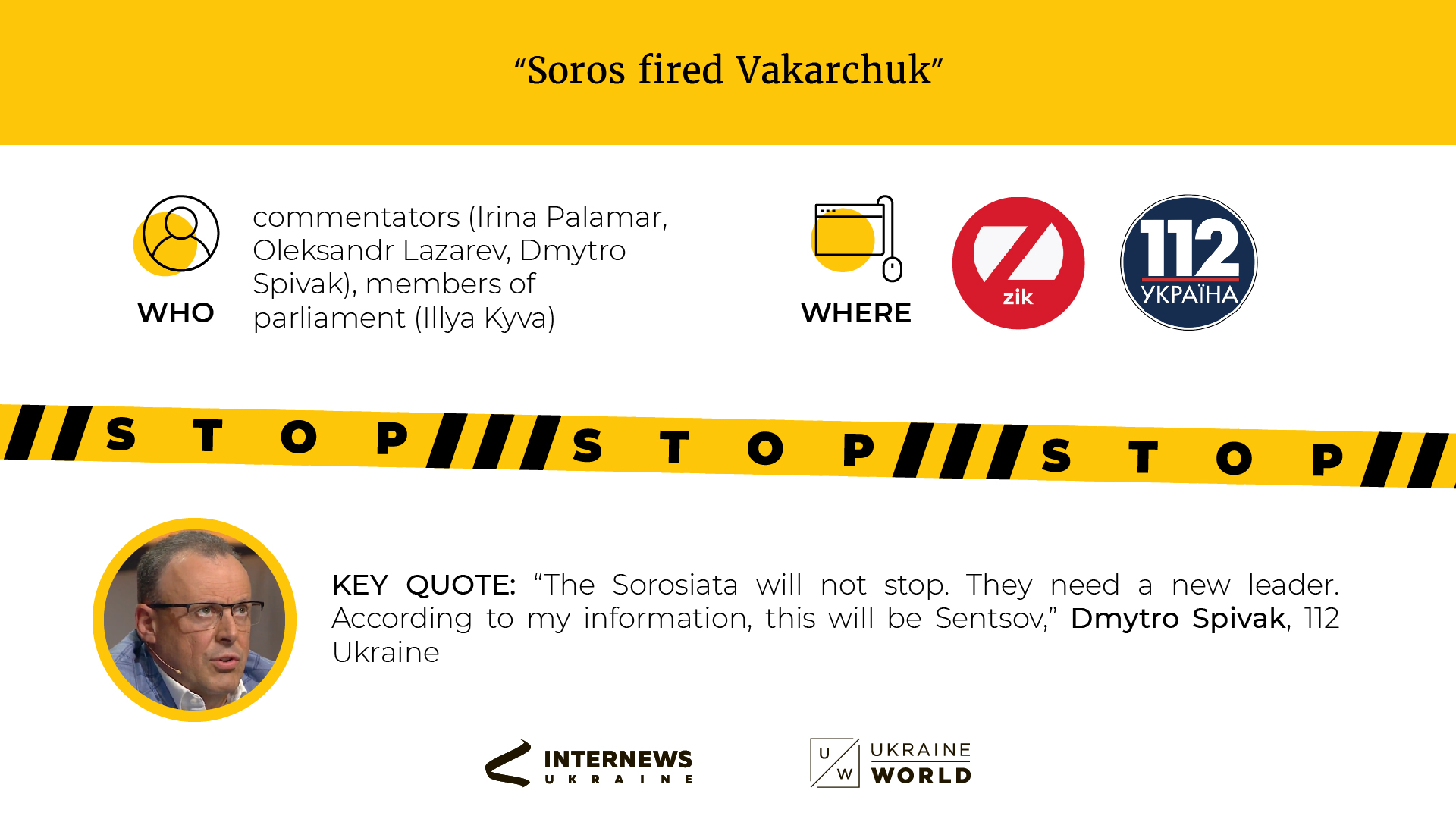 In April, we spotted a narrative about George Soros looking for a replacement for Holos party which would "represent his interests." This narrative re-emerged last week when Sviatoslav Vakarchuk, the leader of Holos, announced his resignation from parliament.

Irina Palamar, a blogger and head of the Ukrainian Stock Breeders Association, said during a talk show on ZIK that "Vakarchuk did not manage to fulfil all Soros's tasks" and was therefore fired.  Palamar said that "globalists headed by Soros control Holos and a majority of MPs from the Servant of the People party," and that their ultimate goal is to "drain natural resources from Ukraine."

Oleksandr Lazarev,  a political commentator, asserted on ZIK that Vakarchuk resigned because he and his party had actually completed their task --- they "opened the doors to the looting of Ukraine." "Holos voted to sell out land and for the banking law---like the true voice of Soros would have done," Lazarev proclaimed.

Dmytro Spivak, a politician and commentator, argued on 112 Ukraine that Vakarchuk was chosen as the leader of Holos by George Soros and Viktor Pinchuk, a Ukrainian oligarch, but the arrangement did not work out. "The Sorosiata will not stop. They need a new leader. According to my information, this will be Sentsov [Oleg Sentsov, Ukrainian filmmaker and former prisoner of Kremlin]," Spivak declared.

"The West organised the hysteria around coronavirus" 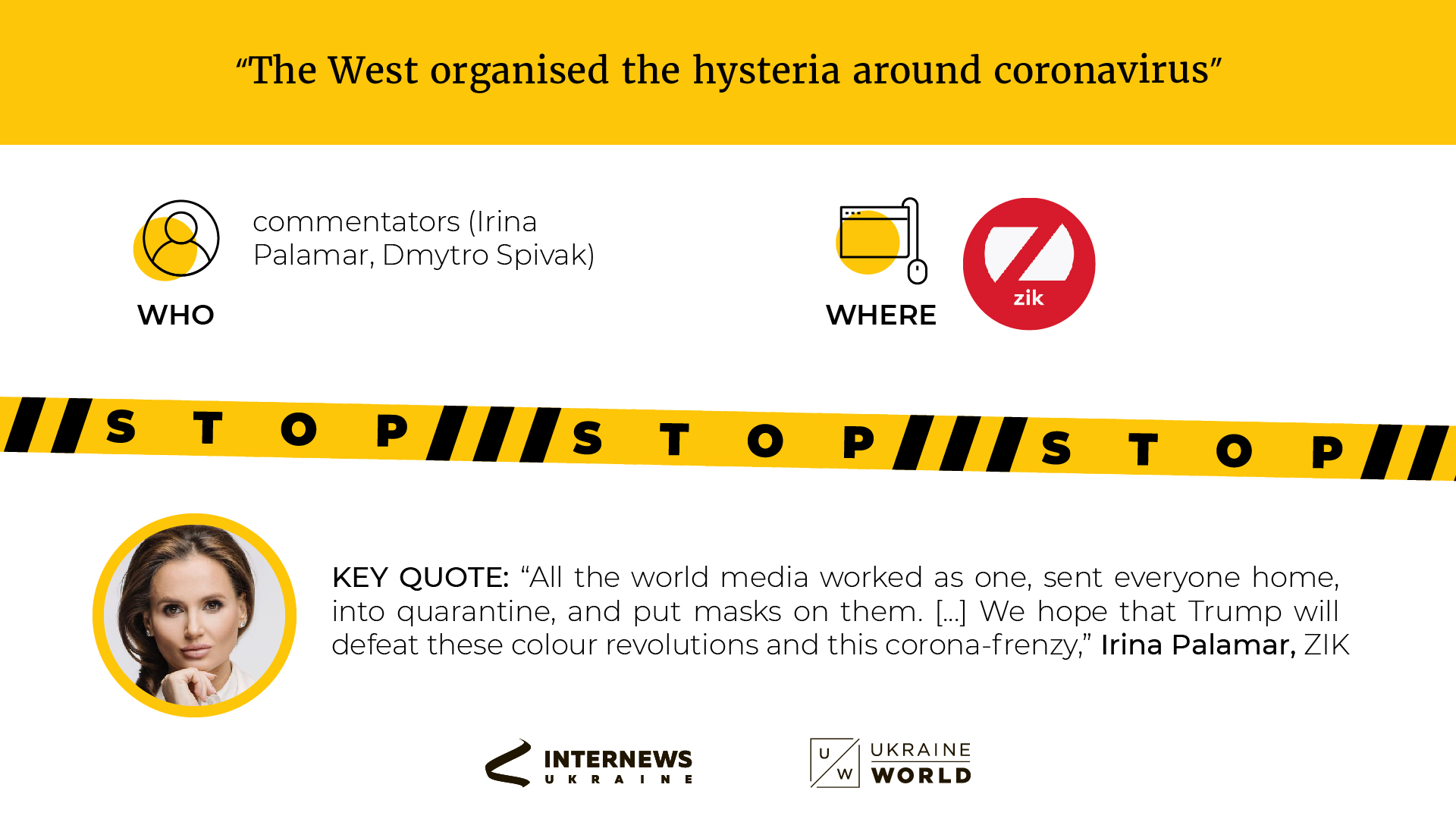 A previous narrative about the West being somehow responsible for coronavirus resurged last week in connection with protests in the U.S.

Irina Palamar, a blogger and head of the Ukrainian Stock Breeders Association, expressed hope that "colour protests in the U.S. will be suppressed" because these events are nothing more than "mischief of Soros and other globalists who push the whole world around."  Palamar also asserted that "these globalists created the hysteria around coronavirus." "All the world media worked as one, sent everyone home, into quarantine, and put masks on them. [...] We hope that Trump will defeat these colour revolutions and this corona-frenzy," Palamar said.

Dmytro Spivak, a politician and commentator, wondered on ZIK why the epidemic situation in the U.S. has not deteriorated due to protests. "Millions of people went into the streets without masks or necessary distance. If we think logically, the pandemic should have surged in the U.S. --- any virologist would tell you that, but we see an opposite tendency [Spivak is inaccurate here; there has been no decrease in registered coronavirus cases in the U.S.]," Spivak said, hinting that there might be some kind of conspiracy taking place.

Donbas is an integral part of a shared Ukrainian and European heritage. In our new video produced together with the Ukrainian Institute, we explain why.
Opinions
February 5, 2021

It is our responsibility to defend ourselves.